Trojans victorious in matchup of aces 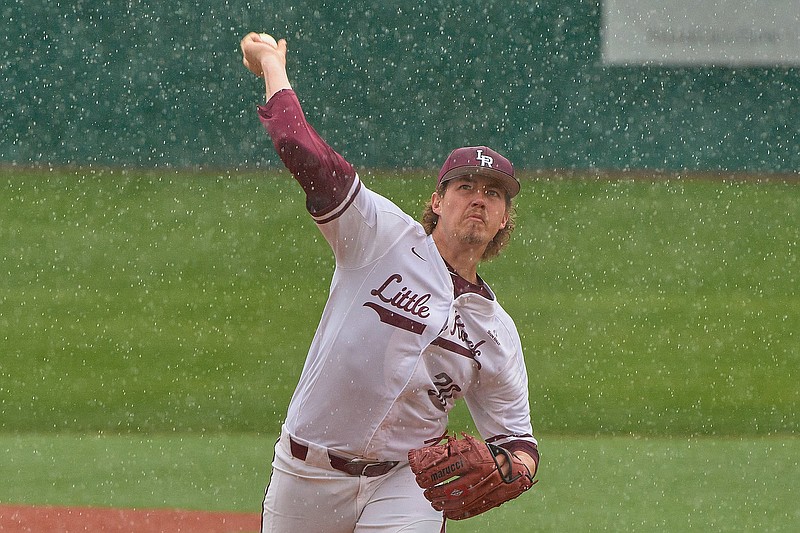 UALR’s Hayden Arnold delivers a pitch in a rain shower Friday during the Trojans’ victory over Louisiana-Lafayette at Gary Hogan Field in Little Rock. Arnold allowed 2 runs and struck out 8 over 6 innings. (Photo courtesy of UALR Athletics)

Reigning Sun Belt pitcher of the week Hayden Arnold took the mound for the University of Arkansas at Little Rock, and right-hander Spencer Arrighetti -- who entered leading the conference in ERA, batting average against and wins -- opposed him for Louisiana-Lafayette.

Arnold and the Trojans won out.

"This was a big win for us," Arnold said. "That guy is really good. I got him today, and that's a great way to start the weekend."

"We've been looking for a complete game like that for a while," Trojans Coach Chris Curry said.

The win puts UALR one game above the Ragin' Cajuns in the division, and a half game up on Texas-Arlington (17-20, 7-5), which does not play a conference series this weekend. Game 2 begins at 6 p.m. today.

The Trojans touched Arrighetti (6-3) for runs in the third and fourth innings, and the sophomore was responsible for two of the four runs that came in after his departure in the sixth inning. He allowed 4 earned on 7 hits over 5 1/3 innings.

"I had a command of all my pitches," he said. "I had good speed. Our pitching coach [R.D. Spiehs] and [catcher] Jake Wright called a great game. It felt great."

Arnold retired the first seven batters he faced before surrendering a one-out home run to shortstop Brett Borgogno in the top of the third inning. The Trojans tied the game at 1-1 in the bottom half after Lyons reached on a walk and came in to score on outfielder Tyler Williams' single off the right-field wall.

UALR shortstop Eldridge Figueroa saved a run with a diving catch on Ragin' Cajuns first baseman Josh Cofield's liner in the top of fourth, and the Trojans led 2-1 after the bottom of the frame on Wright's single to left that drove in designated hitter John Michael Russ.

Defense from Williams and Wright helped maintain the 2-1 lead. The sophomore outfielder tumbled to reach a fly ball on the warning track to keep Louisiana-Lafayette in check in the fifth, and Wright ended the sixth by throwing out Brian Fitzgerald on a failed hit and run.

"Pitching and defense is how you win championships," Curry said. "If we want to accomplish that it had to start there. We had really good defense tonight."

UALR chased Arrighetti with a pair of one-out singles in the sixth to set Wright up for his second RBI of the day, driving in outfielder Noah Dickerson. Figueroa brought home first baseman Kobe Barnum with a bloop single, and the Trojans led 6-2 after Lyons' chopper to left field drove in two.

Barkley inherited a bases-loaded jam from Arnold in the top of the seventh, but he limited the damage to only a run and carried UALR the rest of the way while striking out four and allowing two base runners.

Lyons drove in two more with an eighth-inning double.

"We set the tone today," Arnold said. "Hopefully we can go out and do it again tomorrow and Sunday so we can finish the weekend in control of the West."

Drew Tipton hit a solo home run on the second pitch of the game for ASU, which built upon the lead in the fifth inning. Jared Toler, the first of two batters hit by pitches in the inning, scored on Ben Klutts’ sacrifice fly to right field. Tipton, who walked on four pitches after Toler reached base, scored on Tyler Duncan’s sacrifice fly to center field to go up 3-0.

Chase Evans started the sixth inning with a solo home run for Texas State, and the Bobcats got runs from a bases-loaded walk, a balk, a hit batter and a wild pitch. Jose Gonzalez had an RBI sacrifice fly for the second out of the inning, but it gave Texas State a 7-3 lead.

Dalton Sheffield had an RBI single in the seventh inning for the Bobcats, who also got a three-run home run from Cole Coffey to provide the final margin.

Klutts finished 2 for 3 and was the only player with multiple hits for the Red Wolves, who finished with 8 hits as a team. Right-hander Brandon Hudson (2-1) took the loss after allowing 5 runs — 4 earned — on 6 hits with 2 walks and 2 strikeouts over 51/3 innings.

The University of Central Arkansas (12-20, 7-14 Southland Conference) rallied from a six-run deficit in the sixth inning to take the first game of a weekend series against Stephen F. Austin (12-21, 9-12) at Bear Stadium in Conway.

The Bears totaled 15 hits against the Lumberjacks, with five coming off closer Todd Gauthe in the ninth inning as UCA scored three runs to force extra innings. In the 10th inning, senior first baseman Coby Potvin got a one-out double, and Stephen F. Austin intentionally walked freshman A.J. Mendolia, who went 4 for 5 with 2 runs scored.

A fielder’s choice moved Potvin to third base before sophomore left fielder Kolby Johnson hit a two-out groundball to shortstop and beat the throw to first base as Potvin scored the winning run.

Potvin, Johnson, Connor Emmet, Taylor Daniell and R.J. Pearson all had 2 hits for the Bears, while Drew Sturgeon finished with 3 RBI and Potvin scored 3 times. Freshman closer Tyler Cleveland (4-3) struck out two and stranded two runners in the 10th to earn the victory.

UCA has now won four consecutive games against Stephen F. Austin and 11 of the last 13 in the series.