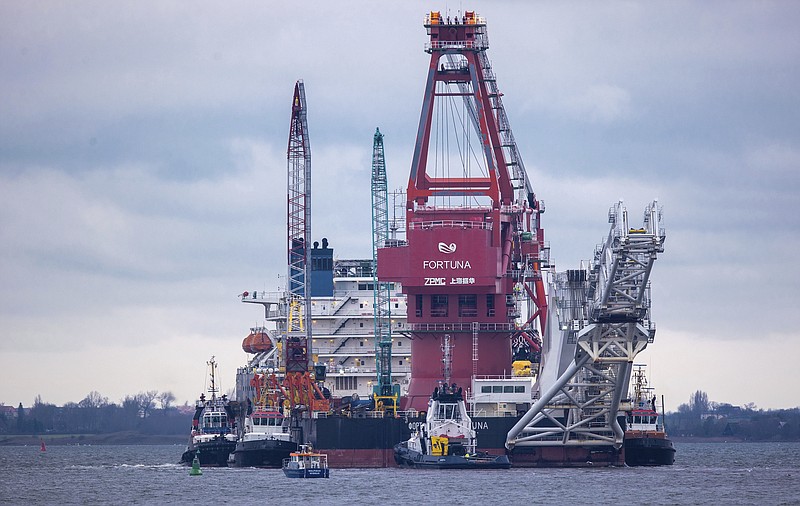 FILE - In this Jan. 14, 2021, file photo, tugboats get into position on the Russian pipe-laying vessel "Fortuna" in the port of Wismar, Germany. The special vessel is being used for construction work on the German-Russian Nord Stream 2 gas pipeline in the Baltic Sea. Pressure is growing on President Joe Biden to take action to prevent the completion of a Russian gas pipeline to Europe that many fear will give the Kremlin significant leverage over U.S. partners and allies. (Jens Buettner/dpa via AP)

WASHINGTON -- Pressure is growing for President Joe Biden to take action to prevent the completion of a Russian gas pipeline to Europe that many fear will give the Kremlin significant leverage over U.S. partners and allies.

But such action could create a rift in trans-Atlantic relations, notably with Germany, at a time when Biden has made restoring ties with Europe a priority.

As the Nord Stream 2 pipeline nears completion, U.S. lawmakers from both parties have stepped up demands on a reluctant White House to impose new sanctions on Russian and European companies to halt the project. But prospects of that happening would seem slim: Germany continues to support the project as it steps up consumption of natural gas, and the pipeline is roughly 95% finished.

Biden has said he opposes the pipeline, which is owned by the Russian state company Gazprom, with investment from several European companies. He has been keen to portray himself as tough on Russian President Vladimir Putin while being a strong supporter of Eastern European countries, such as Poland and Ukraine, that are set against the pipeline as it bypasses both.

Of potentially greater concern to the U.S., the Russia-to-Germany pipeline would increase Western Europe's already heavy dependence on Russian energy while U.S.-Russian tensions are soaring over a number of issues, including Ukraine, election interference, cyber intrusions and the crackdown on Russian opposition figure Alexei Navalny and his supporters.

At the same time, the administration is seeking broad European support, especially from Germany, the continent's economic powerhouse, for a planned withdrawal from Afghanistan, for climate change measures and for efforts to counter China's increasingly global assertiveness. It's not clear whether sanctions targeting businesses from Germany and elsewhere would undermine efforts to advance those goals and to repair relations that were frayed during Donald Trump's presidency.

On Wednesday, the Senate Foreign Relations Committee unanimously advanced legislation that would require the administration to either impose sanctions on 20 companies involved in the pipeline's financing and construction or explain why they deserve exemptions.

In January, the Trump administration hit several Russian companies and ships with penalties for their involvement, but Biden has not expanded the list.

The legislation was sponsored by Sen. Ted Cruz, R-Texas. But it also won support from some of Biden's strongest Democratic foreign policy supporters in the Senate, such as committee Chairman Bob Menendez of New Jersey, Chris Coons of Delaware and Jeanne Shaheen of New Hampshire.

"I think, right now, as we see Putin trying to eliminate his biggest opposition leader, Navalny, in prison, the best shot we can make is to stop the Nord Stream 2 pipeline, if we are going to get his attention," Shaheen said.

Democrats agreed to support sanctions after Republicans promised to drop opposition to two of Biden's top State Department nominees. The bipartisan support suggests the administration will be hard-pressed to ignore it. Biden was already stung by criticism in February for not expanding on the Trump administration's sanctions.

"We share an overall attitude toward Nord Stream 2 with many on Capitol Hill, and that is the position that it is a bad deal," State Department spokesperson Ned Price said Thursday. "We will continue to do everything we can, including consistent with legislation that's already on the books, to oppose its construction and finalization."

But the administration has yet to take a position on the legislation, which congressional aides on both sides of the aisle believe has a good chance of passing. It would give Biden 15 days to make a determination on whether to hit the 20 companies and vessels with sanctions.

On Tuesday, Chancellor Angela Merkel defended Germany's cooperation with Russia on Nord Stream 2. She noted that Russian gas already flows freely into Europe along other routes, including the Nord Stream 1 pipeline under the Baltic Sea to Germany.

"I would like to point out that the gas delivered through Nord Stream 2, which isn't yet flowing, is no worse than the gas from Nord Stream 1, that which flows through Ukraine, and that which comes across Turkey from Russia," Merkel said.