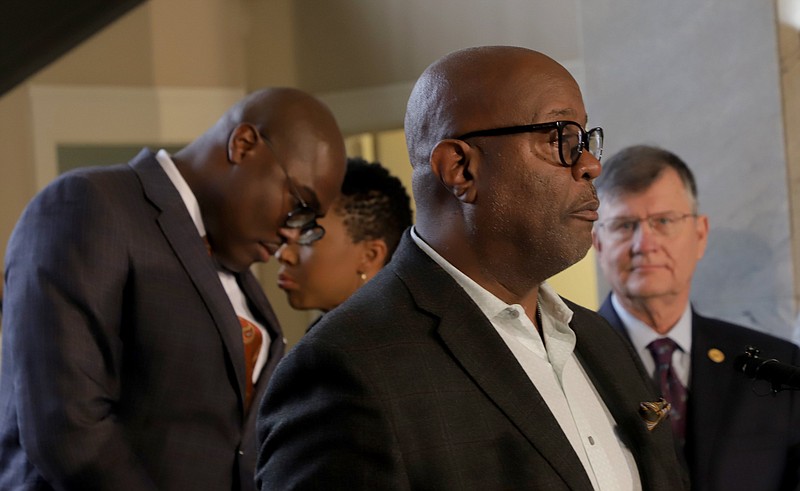 Among the expenses were a performance of the national anthem by a local band as well as layout, editing and design services for Scott's speech that were billed at $100 an hour, according to invoices obtained by the Arkansas Democrat-Gazette.

Additionally, The Design Group -- the local marketing and public relations firm where chief mayoral spokeswoman Stephanie Jackson and her husband Myron are employed -- was credited with production elements of the virtual broadcast.

A Freedom of Information Act request for city records did not reveal payments to the company. The Design Group was credited with "art direction and design" in the credits of the State of the City virtual broadcast, which aired March 25.

According to Jackson, The Design Group was not compensated for work on the State of the City broadcast.

Jackson said she is a part-time employee of the city and simultaneously serves as director of public and media relations for The Design Group.

With regard to the work by The Design Group, Jackson said the city used several other firms for the State of the City production and said The Design Group contributed art direction.

She suggested her reason for deferring questions on the matter to the marketing firm was "because it's very important that we don't create any perception or anything that would be construed as improper."

Jackson added that she is "a major stickler" about keeping questions related to The Design Group separate.

Asked why The Design Group was involved in the State of the City at all in light of this concern, Jackson said, "I don't have any. I don't have a concern. And I don't know that anybody else does either."

Jackson serves as the primary city spokeswoman for Scott and worked on his successful 2018 campaign for mayor.

Another city communications staffer, Lamor Williams, who preceded Jackson in working for the city and handled other municipal communication duties, announced April 16 that he was leaving to pursue other opportunities.

Jackson's husband Myron serves as the Design Group's chief executive officer, according to Arkansas Business. The company was formed in 2007, according to records maintained by the Arkansas Secretary of State's office.

Last month's 48-minute virtual broadcast, dubbed "Rebuild the Rock: State of the City Virtual Experience," incorporated taped interviews with Little Rock residents and a covid-19 retrospective into a video package that played prior to the mayor's speech.

A musical group called the Rodney Block Collective performed "The Star-Spangled Banner," and a collection of Little Rock students recited the Pledge of Allegiance.

In an introduction to the broadcast, Scott said "this year, because we couldn't gather in person, it was important to my administration to create a celebration of what's good about Little Rock: you."

He added, "So I'm happy to speak directly into your homes, or wherever you may be, for this virtual experience."

Scott delivered his address without the traditional audience and used the occasion to ask Little Rock residents to approve a sales-tax increase to fund quality-of-life improvements.

In the broadcast's credits, Jackson was listed as the program's executive producer. The mayor's senior adviser Kendra Pruitt and Williams were credited as producer and associate producer, respectively.

According to one of the invoices for the 2021 address, an individual named Carter Christensen billed the city $1,100 for "layout, copy, edits and design of State of the City collateral at $100/hr."

According to his LinkedIn profile, Christensen is an account supervisor for the public relations firm Edelman.

A $550 payment to Sunbelt Convention Services was for temporary flooring and staff, according to Jackson.

An additional invoice from C4 Productions for $575 said the company provided audio recording, mixing and editing related to the Rodney Block performance.

Payments for the mayor's previous two State of the City speeches exceeded the cost of the 2021 virtual broadcast, according to city records obtained through the Freedom of Information Act.

In 2020, the city paid at least $3,945, making last year's the most expensive State of the City event. Heifer International was paid $500 for Scott to deliver his speech at the group's downtown Little Rock campus. Conference Technologies was contracted again, this time for $3,445.

The company provided gear such as a teleprompter and LED light fixtures, according to an invoice.

The 2021 State of the City was not the first time The Design Group has been tapped for a municipal video production.

In 2019, the city of Little Rock paid The Design Group $4,990 to create a lengthy video package that compiled footage of the Feb. 22 fatal shooting of Bradley Blackshire by then-Little Rock police officer Charles Starks, the Democrat-Gazette reported in May 2019.

The police department released the "critical-incident video" 13 days after the shooting.

On the question of a conflict of interest over paying a company tied to a city staffer, Scott told the newspaper at the time, "I did not see a conflict of interest, particularly in the weighing of community unrest and transparency. We could not afford to wait on releasing that video a 14th or 15th day."

Because purchases of more than $5,000 must go out for competitive bids, per city procurement division requirements, the $4,990 payment to The Design Group avoided a competitive bidding process.

The city's website notes that a waiver can be obtained when waiving competitive bids is in the city's best interest.