No Books, No Walk, No Festival: May events in Eureka Springs canceled, postponed, altered 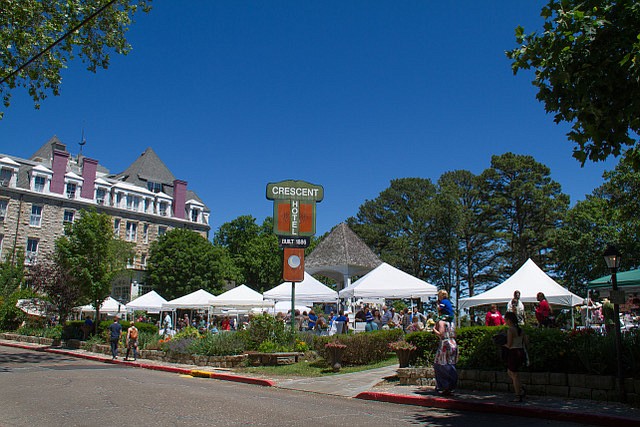 During its 15 years at the Crescent Hotel, Books in Bloom brought local and world-renowned authors to Eureka Springs. Co-founder Jean Elderwind says that although “famous is great, also important is impact.” “Without a doubt, our invitation to Garrard Conley had a big impact on all who met him,” she says. “His only book, a memoir titled ‘Boy Erased,’ in which told of his parents attempt to change his sexual orientation through conversion therapy, touched his Books in Bloom audience deeply.” (Courtesy Photo)

Lovers of the arts tend to agree an end is in sight, and a new normal is emerging. But while artists would like to be through with the coronavirus, the pandemic isn't yet through with the arts enclave of Eureka Springs. This will be the second year that the May Festival of the Arts has been canceled; the White Street Walk has been postponed until 2022; and "the Carroll and Madison Public Library Foundation made the decision to 'close the book' on Books in Bloom," according to the event's co-founder, Jean Elderwind.

First held on May 1, 2005, the Books in Bloom Literary Festival brought authors, both internationally known and those who call the Ozarks home, to the Crescent Hotel for one big afternoon of interaction with their fans.

"As Books in Bloom's reputation grew as a 'home-grown, world-class' event, authors heard about the festival from their fellow authors at conferences and other festivals, which made their 'yes' easier," says Elderwind. "Also, there is something to say about persistence! It might take four or five years of asking to get an author commitment, but it was a happy day when we did."

Over the years, Elderwind and her co-chairman, Lin Wellford, hosted a who's who of popular and celebrated authors: James Dean, the artist creator of Pete the Cat, had lines for autographs wrapped around his booth. Gail Sheehy, author of the 1976 "Passages," was a big draw, Elderwind continues. Jeffery Deaver visited twice. "His books are sold in 150 countries and have been translated into over 25 languages. He has sold 50 million books worldwide."

And "it was standing room only when mystery writers Craig Johnson or C.J. Box would visit. Their iconic protagonists, Sheriff Walt Longmire and Wyoming Game Warden Joe Pickett, respectively, were etched so vividly in their readers' minds that it is hard to believe that they are fictional characters."

Books in Bloom was always about that connection, never about making money, Elderwind adds.

"Here is where I really want to say that the Library Foundation will be forever grateful to The 1886 Crescent Hotel and Spa. Without their generosity, the festival would not have happened in the way it did. They gave us their classic hotel for our use and assisted in defraying some of our other expenses, too.

"Any profit we made after the last bills were paid became seed money for the next festival."

Elderwind retired from the library system six years ago but remained on the foundation board, continuing to organize Books in Bloom until the pandemic put a halt to last year's event.

"It was obvious to us all by March 2020 that we could not proceed with the May festival," she says. "[And] I knew after planning 15 festivals it was time to turn it over to someone else. No one stepped forward, so we let it go. It does make me sad but, as you know, sometimes there is a beginning, middle and end to even really good things. I loved our 15-year run and brought some great authors here who inspired readers and fledgling authors."

The foundation, she says, will turn its attention to developing new author events in each of the six libraries in the two counties.

"I am very excited about this new turn."

Next year's White Street Walk, traditionally held on the third Friday evening during the May Festival of the Arts, will happen and it be numbered as the 30th, promises Zeek Taylor, one of its founders. In the meantime, he says, "galleries are still open in Eureka Springs, and art is available for purchase in person. The strange pandemic year has caused our creative community to become even more creative."

The White Street Walk was conceived as a neighborhood event by artist friends from Memphis -- Taylor, Eleanor Lux and Mary Springer -- who had moved to the Eureka Springs at about the same time.

"The walk has grown into a major event, [but] producing the show is still done by Mary, Eleanor and me," says Taylor.

It's the popularity, he says, that forced the postponement of the event until 2022.

"The event draws hundreds of visitors to White Street, and social distancing would not be possible," says Taylor, who admits that being in an at-risk age group makes him more cautious. "Even though some of the art displayed is outdoors where it is safer to gather, there are several indoor art displays that are in rather small spaces. Again, we are disappointed that the show can't happen this year, but we did not want to be responsible for further spreading the virus -- especially when there is an end in sight."

Taylor says being confined to his house has caused him to be even more creative than usual, and he thinks that's true of many other Eureka Springs artists, who have found patrons for their art through the internet.

"Those who I've talked with and who made online sales really worked on marketing their art via the web," he says. "Online marketing was the key to surviving after in-person shows and festivals had been canceled."

As far as live events, Taylor says the White Street artists will make their own decisions.

"I personally have made no plans at this point to do any shows. I'm still somewhat concerned about the pandemic. That said, the White Street organizers are looking forward to resuming the Walk in 2022."

May Festival of the Arts

Which brings us to the 35-year tradition of an arts month in May.

"The original intent of the month-long event was to kick off the tourism season," says Sandy Martin, chairwoman of the Eureka Springs Arts Council. Over the years, the City Advertising and Promotion Commission was involved, as was Chamber of Commerce, she says, and more recently the Eureka Springs Arts Council took on some of the organizational duties.

Martin says no entity decided to cancel this year's event. "It was covid-19 that made that decision for us."

"Because a month-long celebration with all the moving parts takes many months to plan and organize, we had to make a decision about May Festival of the Arts 2021 in the early fall of 2020," she explains. "Covid cases were on the rise, vaccines weren't available yet, and the mayor extended the moratorium on all city events, festivals and parades through June of 2021. Clearly, anything with the month of 'May' in the title was not going to happen."

However, she adds, "the brand and essence of Eureka Springs is the arts, and the Arts Council wanted to make sure the emphasis on the arts was included in the 2021 marketing strategy. The CAPC agreed to maintain the funding with the understanding that the Arts Council would make recommendations on how to proceed considering the unknowns and to ensure that everything was covid-safe. We made our recommendations to the CAPC in November of 2020."

Martin says the resulting plan for events "will be a work in progress for at least the first six months of the year."

"What we know now is that people want to travel to locations that are authentic, have plenty of outdoor activities and spaces and great food," she says. "That's Eureka Springs, and we want to leverage that interest by doing more outdoor art such as The Plein Air Paint-Outs happening in May and produced by the Plein Air Artists of Eureka Springs. We are planning to again present our Chalk Street Art Festival in the summer. The art galleries will continue to do their Gallery Strolls and special exhibits featuring local artists. In addition, we will add public art projects."

Martin also hopes for some fall film events, more music at the Eureka Springs City Auditorium and a fall festival that might include the ArtRageous Parade. She encourages artists to share their ideas by emailing artscouncileureka@gmail.com or visiting the eurekaspringsartwall.com website.

"The thing about Eureka Springs is that art is everywhere, every day – it's in our DNA." 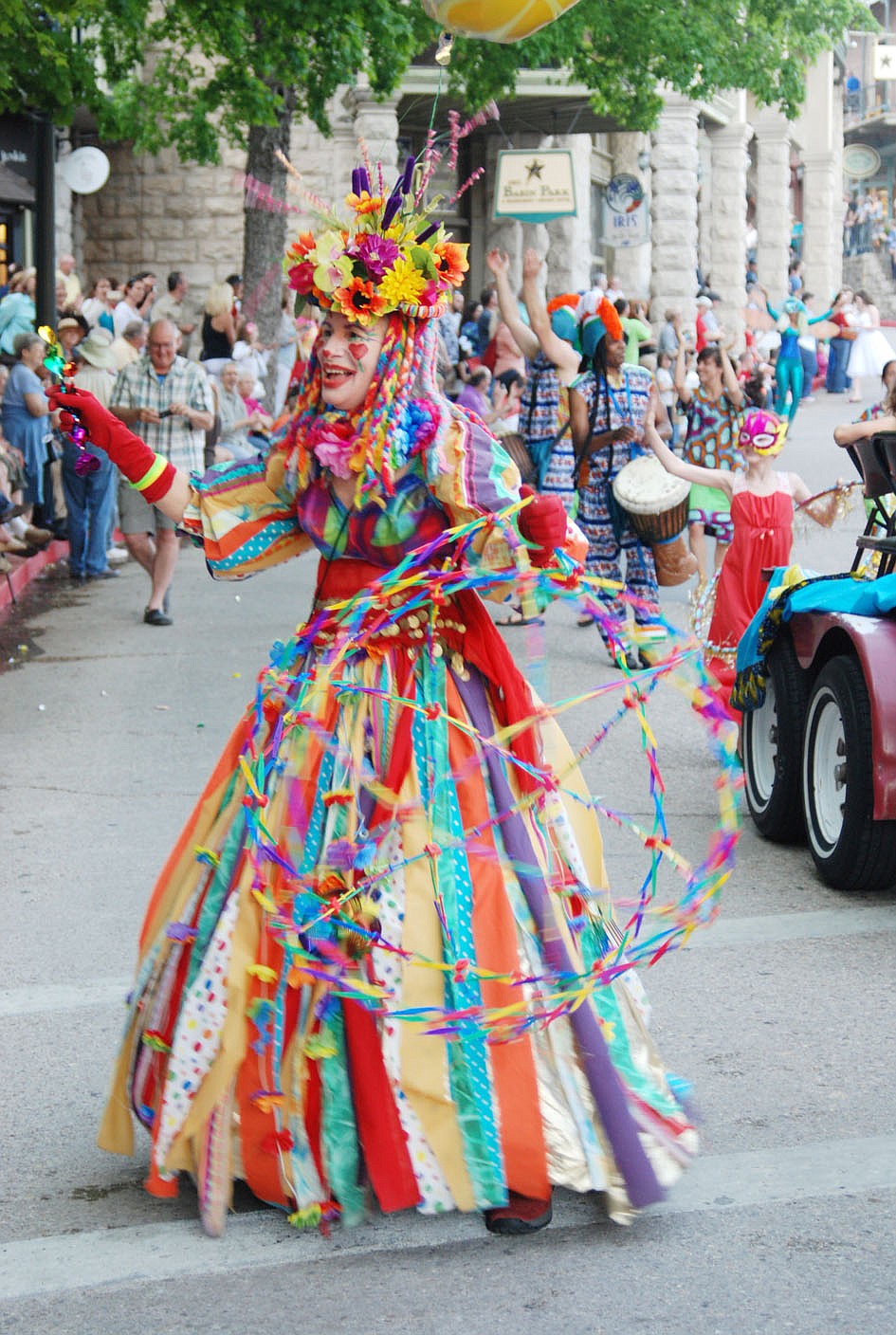 Organizers hope the ArtRageous Parade, a staple of the May Festival of the Arts in Eureka Springs, can be rescheduled to the fall of 2021. (Courtesy Photo) 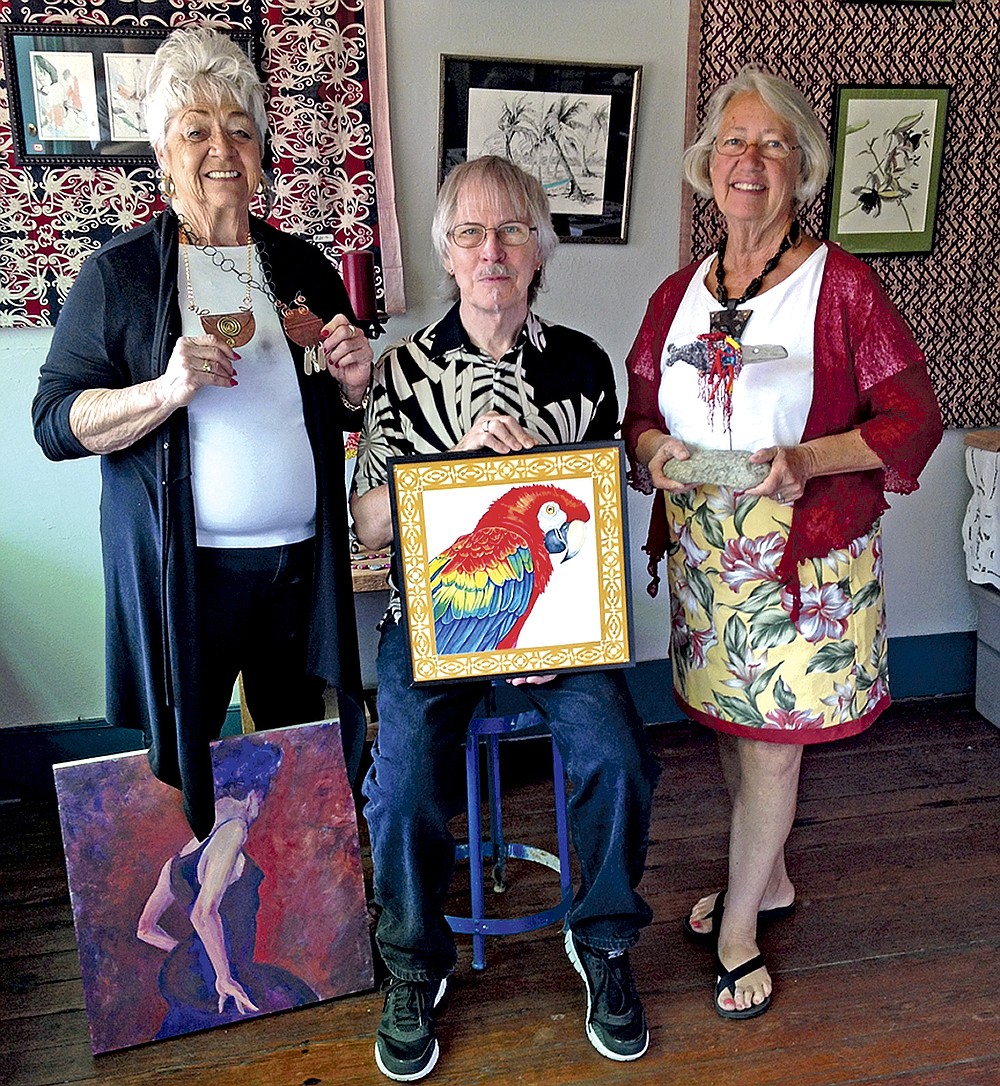 White Street Walk founders Mary Springer (from left), Zeek Taylor and Eleanor Lux promise the spring gallery tour will resume in 2022 and will celebrate its 30th anniversary then. (Courtesy Photo) 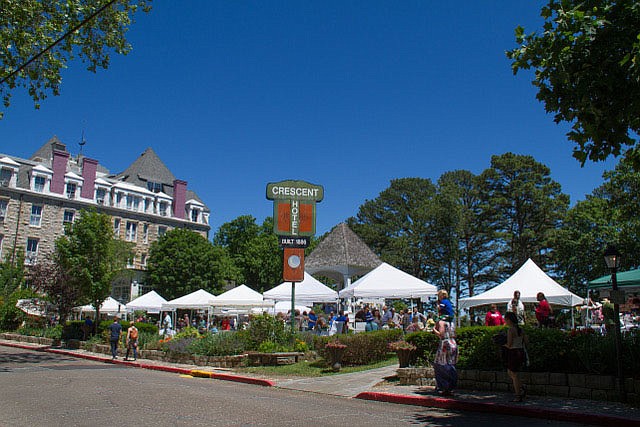 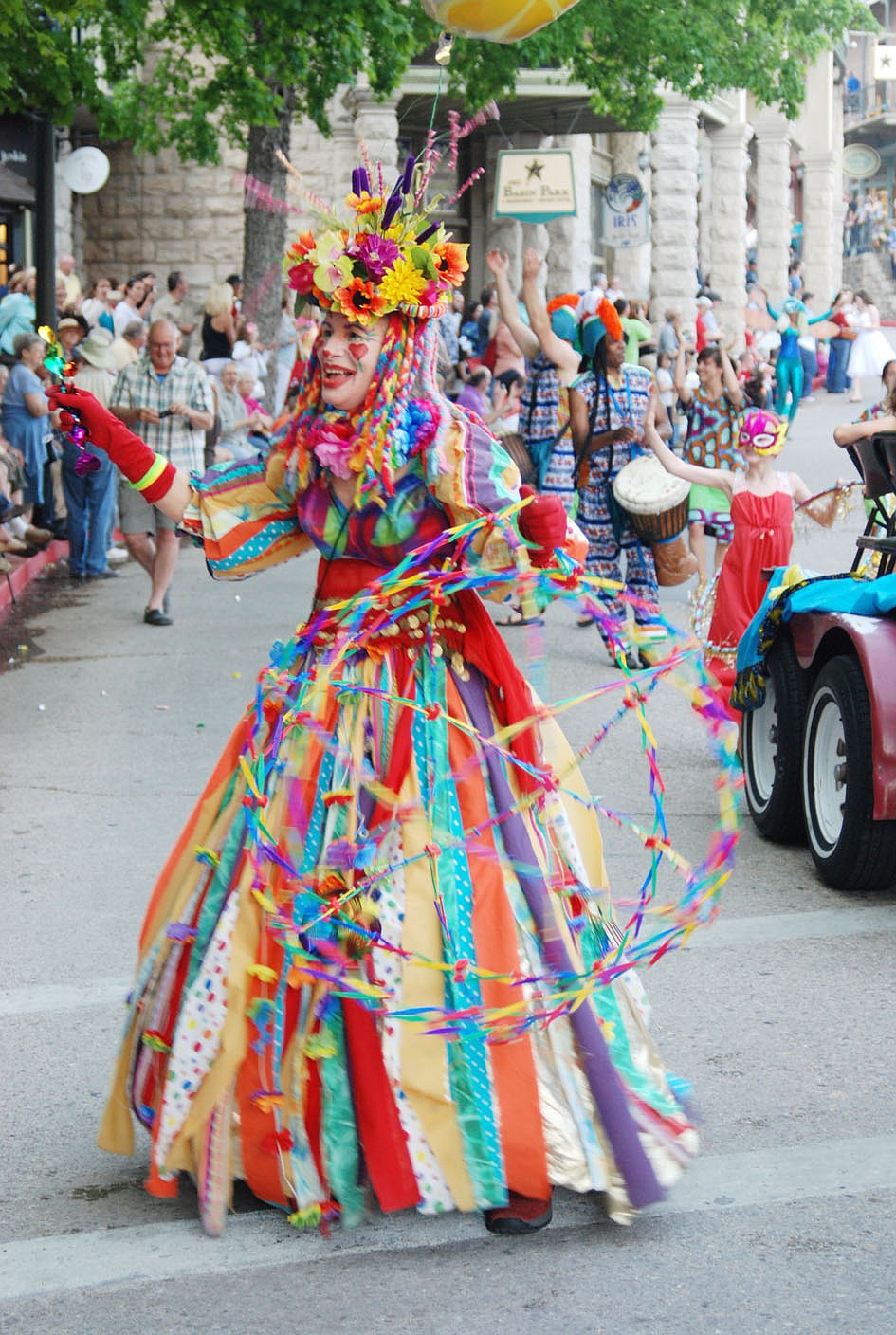 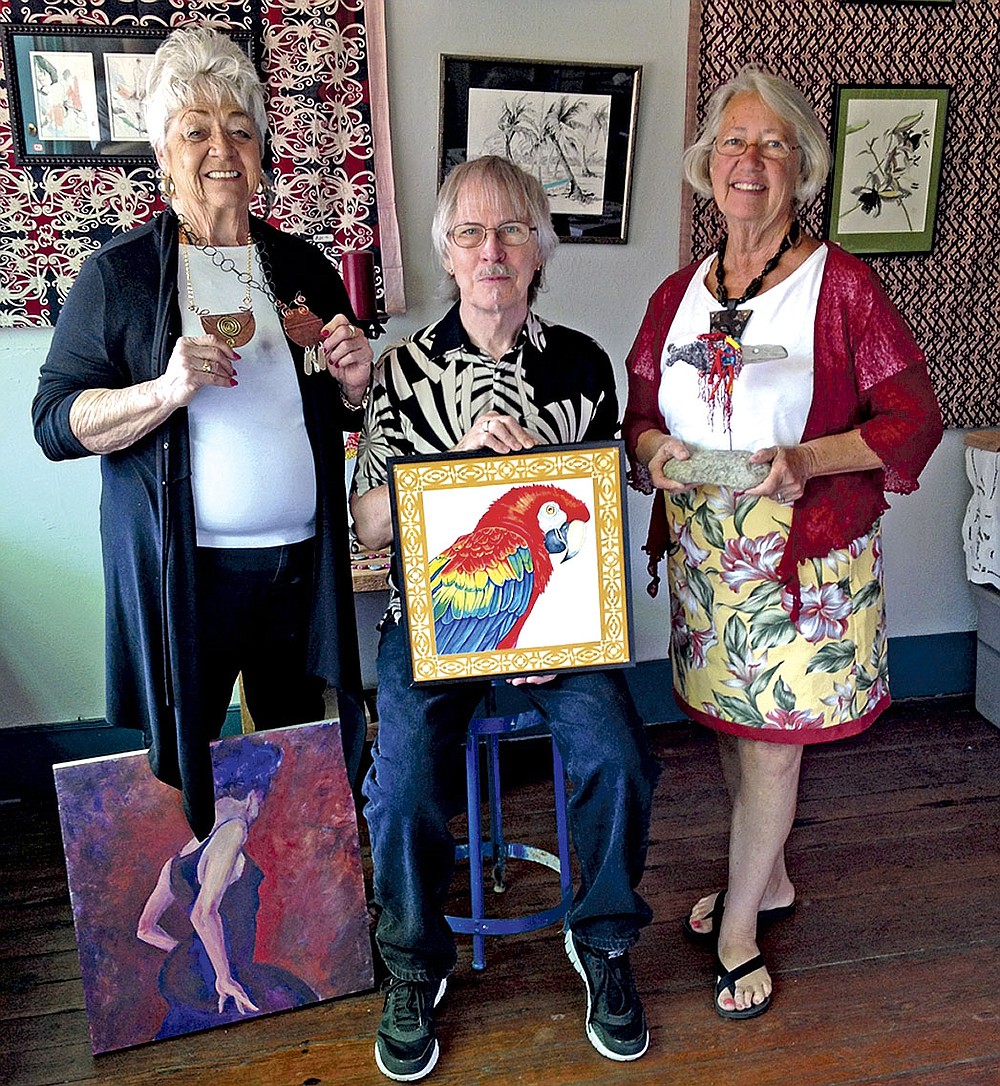