Plastics plant is a tough sell in Louisiana 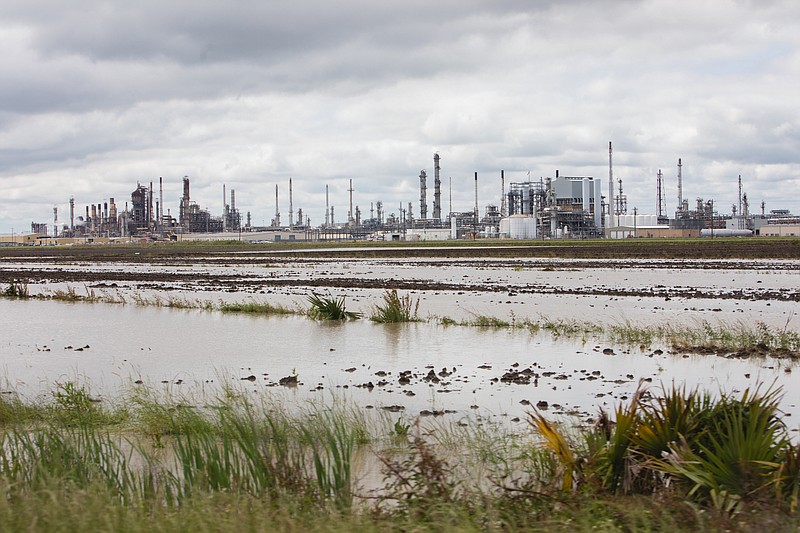 Industrial plants and flooded farmland cover much of the landscape in St. James Parish, La., not far from where Formosa hopes to build a huge plastics manufacturing complex. MUST CREDIT: Photo for The Washington Post by Camille Lenain

The 5th District of Louisiana's St. James Parish was never exactly a bustling community -- but it was still a community.

Then the landmarks began to disappear. Woodrow's grocery closed down. The St. James sugar co-op ground to a halt. And the cleaners and post office shut their doors for lack of business.

Heavy manufacturing moved in. Duck's Grocery sold out to a rail-car and crude-oil storage facility. The high school football field was overrun by subsidiaries of a Chinese company and the Koch family's corporate empire, which teamed up to build a huge petrochemical plant. Buena Vista Baptist Church now worships a couple of thousand feet from a methanol plant and asphalt depot.

Against this background, many parish residents feared they had no prayer of stopping a $9.4 billion plastics complex that the Formosa Plastics Group proposed in the district on strips of flat sugar cane fields. Wedged in between other industrial sites along the Mississippi River, the facility would cover an expanse big enough for about 1,200 football fields, while discharging large amounts of toxic emissions into the air.

Over the past dozen years, the United States has seen a surge of cheap shale gas, one of the principal building blocks for plastics, and Taiwan-based Formosa, one of the world's largest chemical companies, believes its project can be profitable. Louisiana is the nation's third-biggest producer of natural gas, and its lower stretch of the Mississippi already has more than 200 chemical plants and refineries. Formosa would benefit from cheap gas and an already highly developed infrastructure, including rail and electric transmission lines, pipelines and ports.

But the company's prospects in Louisiana are suddenly far from certain. Most of the region's plants are close to historically Black communities like Welcome and Convent in St. James Parish, where some people trace their lineage to enslaved ancestors, and the Biden administration's support of environmental justice has focused new attention on the health and environmental impact of the proposed complex. On April 8, in a symbolic gesture, the New Orleans City Council voted unanimously to declare its opposition.

The plant is being fought for its potential harm to health and the environment. It would be a mile from the elementary school and 2 miles downriver from the Sunshine Bridge, part of an 85-mile expanse from Baton Rouge to New Orleans that's dubbed "Cancer Alley." Under state environmental regulations, it would be allowed to emit more than 800 tons a year of toxic chemicals, nearly 6,500 tons of pollutants known to cause respiratory ailments, and more than 13.6 million tons of greenhouse gases annually.

"The plants aren't building our communities," said Clyde Cooper, who represents the 5th District on the parish council. "They're destroying them, and we have to stop it."

Several groups of independent scientific experts have rallied on the community's behalf. One affiliated with the United Nations Human Rights Council concluded last month that the Formosa plant would more than double the parish's cancer risks, which it said would be skewed toward Black Americans. They estimated that the combined equivalent of annual carbon dioxide emissions there could exceed those of 113 countries.

The economics of the "Sunshine Project" also have dimmed recently. Tom Sanzillo of the Institute for Energy Economics and Financial Analysis argues that the plant's likely construction cost overruns and tight profit margins make it harder to justify, especially given a global oversupply of plastics.

"The case to us is clear that there is no market need for this plant, the state can do without it, and, to a good segment of the population living there, the project is a horrible burden, the poster child for environmental racism," said Sanzillo, the institute's director of financial analysis. "The president recently highlighted Cancer Alley as a real problem, and this is an opportunity to do something about it."

The 2,400 acres that Formosa owns in St. James Parish were rezoned "residential/industrial" in 2014 by the planning commission and parish council. According to Anne Rolfes of the Louisiana Bucket Brigade, an environmental activism group based in New Orleans, the result was a land-use plan that "concentrates all industry in the two highest-majority-Black districts in the parish." Census data shows that the Fifth District is 91 percent Black. About 61 percent of children live in poverty, and median family income is 60 percent of the state average.

In April 2018, the company unveiled its future plastics plant. The next month, more than 300 people packed into a hearing in the parish council chambers. Cooper, whose father was the first Black person elected in the parish, ultimately voted to give Formosa the go-ahead, but only after he insisted that it pay for worker training, hire local businesses, agree to cover health screenings for everyone living within 5 miles of the complex, install fence-line pollution monitors and beautify the property to hide the facilities.

"Some people think I voted for Formosa because I was for them," Cooper said. "I was hoping they wouldn't agree and would walk away." Instead, at the last moment, the company agreed.

The company disputes the accusations about health problems. It says "there is simply no scientific proof" of inflated cancer rates in the area. Recently, in response to a reference to Cancer Alley by President Joe Biden, Sen. Bill Cassidy, R-La., suggested that the state's higher reported cancer rates were from higher incidence of cigarette smoking, obesity and viral infections.

Part of the controversy stems from the Louisiana Tumor Registry. Its parish data isn't specific enough to look at the communities closest to the plants. In addition, the real growth in chemical plants took place over the past decade, meaning many ill effects may not have had time to develop.

Yet critics say there are still ways to measure future harm.

"Hexane is something folks might work on in laboratories, but they would wear goggles, gloves, personal protection" equipment, she said on a Facebook video posted by the Bucket Brigade. The label on a bottle of hexane warns that the chemical "may be fatal if swallowed and enters airways" and "may cause damage to organs through prolonged or repeated exposure." The final line: "Avoid release to the environment."

Still, Gov. John Bel Edwards remains committed to the Sunshine Project, touting it as key to "a brighter economic future for Louisiana," and Formosa has tried to associate its proposed facility with better lives.

Formosa's plan has run afoul of environmental groups worried about possible spills of tiny pellets called nurdles, which are used in molds to manufacture plastic products. Last August, a container fell off a ship in New Orleans, dumping hundreds of millions --if not billions -- of nurdles into the Mississippi River. The regulatory body responsible for investigating the incident remains unclear because nurdles are not classified as a hazardous material.

In 2019, Formosa paid $50 million to settle a case with the San Antonio Bay Estuarine Waterkeeper after billions of the pellets were found in a bay and creek near its south Texas plant. Afterward, activists loaded a truck with nurdles that had been recovered and used for evidence and drove them to Baton Rouge. Rolfes and another member of the Bucket Brigade left a box of the stuff outside the homes of four chemical industry lobbyists there. They also left notes: "We have delivered this package of nurdles as a reminder -- Louisiana does not need any more pollution, plastics or otherwise."

"We brought their own pollution back to them," said Rolfes, who was accused along with her companion of "terrorizing." The charges, punishable by up to 15 years in prison, were later dropped.

For now, the Formosa project is on hold. Just after the November election, the U.S. Army Corps of Engineers withdrew the permit it had granted under the Clean Water Act for excavation and the filling in of wetlands. Further analysis and a public comment period must now take place. Still unresolved is a state lawsuit challenging 14 air permits issued by the Louisiana Department of Environmental Quality.

In March, however, a three-judge appellate panel said White had "abused her discretion" and sent the case back to her to reconsider.

The people who live in St. James Parish have waged similar battles before. In 1998, the United Church of Christ helped residents fight the Japanese-owned Shintech, which scrapped its efforts to build a polyvinyl chloride plant in Convent. In 1993, community leaders thwarted Formosa's plans to build a wood pulp and rayon plant in Wallace.

Chasity White, a phlebotomist who works in Baton Rouge, hopes such victories can be repeated. She has lived in the 5th District her entire life, and her home is just across the street from one of the levees that helps hold back the Mississippi. She now wonders whether the petrochemical facilities, one of them within walking distance, are to blame for her father's cancer. She's concerned for her teenage son.

"The smell when you go by certain industries, you get dizzy, nauseous and your nose starts burning," she said. "I know in my heart of hearts, it hurts to say, that one day eventually I will have to move."

House Natural Resources Committee Chairman Raul M. Grijalva, D-Ariz., and Rep. A. Donald McEachin, D-Va., are urging the president to permanently revoke the Army Corps permit. "This disastrous project is an affront to environmental justice and contrary to your goals to reduce pollution in frontline communities," they wrote in a March 17 letter.

Cassidy, Louisiana's senator, countered that the complex met federal and state health and safety standards and that Formosa would install technology to monitor air quality and additional drainage infrastructure to protect waterways.

"These two Democrats, who are not from our state, are not basing this on science," he said in a statement. "This is someone outside of Louisiana demanding these communities live in poverty, sacrificing Louisiana jobs and economic security to satisfy their conscience."

Biden has given the task of scrutinizing complaints about environmental justice to the Council on Environmental Quality, run by Brenda Mallory. In her confirmation hearing last month, she pledged to "ensure that the voices of the poor and the powerless -- from the most rural parts of America to our biggest cities -- are heard as we tackle the environmental and public health crises the nation faces." 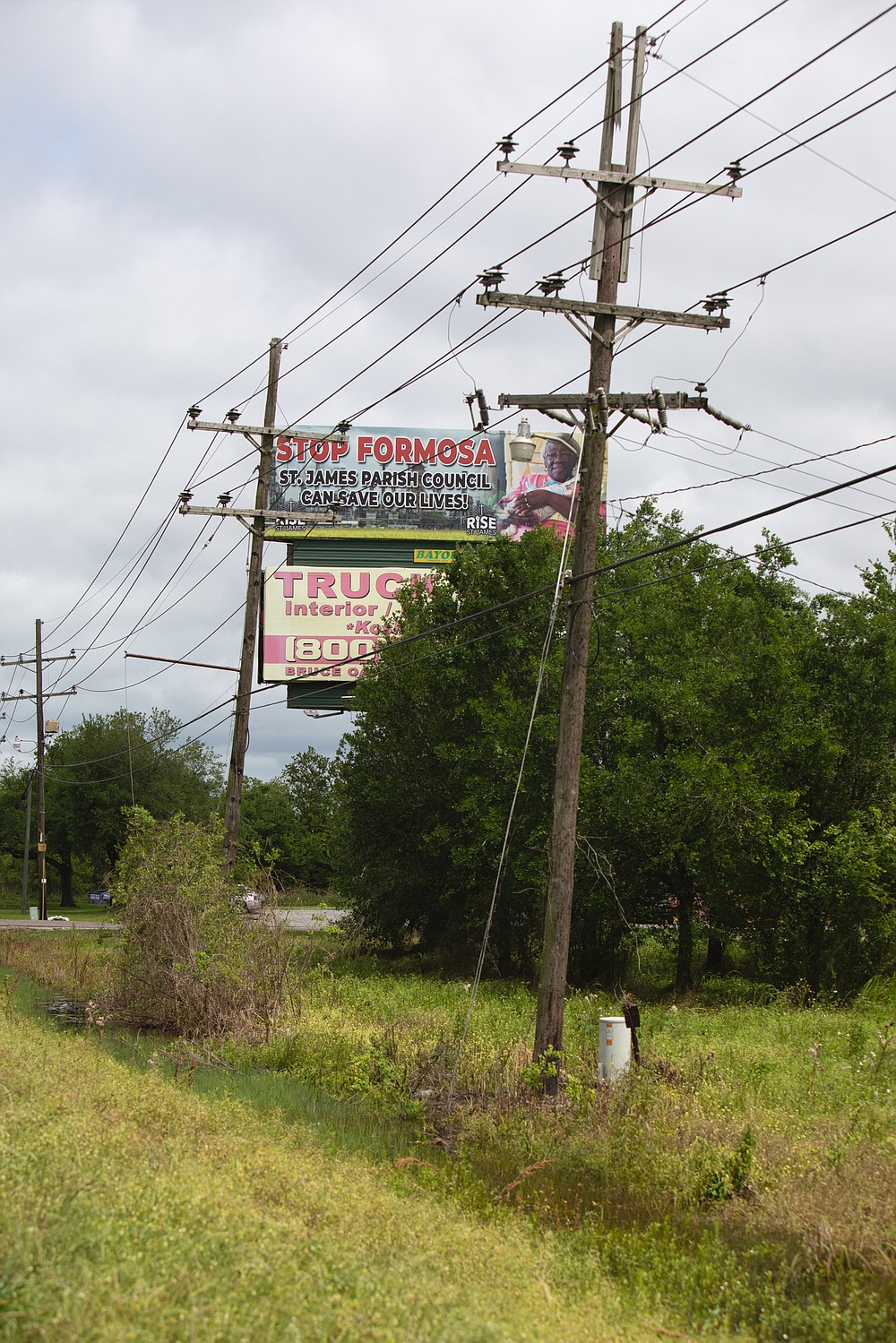 A billboard in St. James Parish, Louisiana, makes clear the local opposition to Formosa's proposed plant. MUST CREDIT: Photo for The Washington Post by Camille Lenain 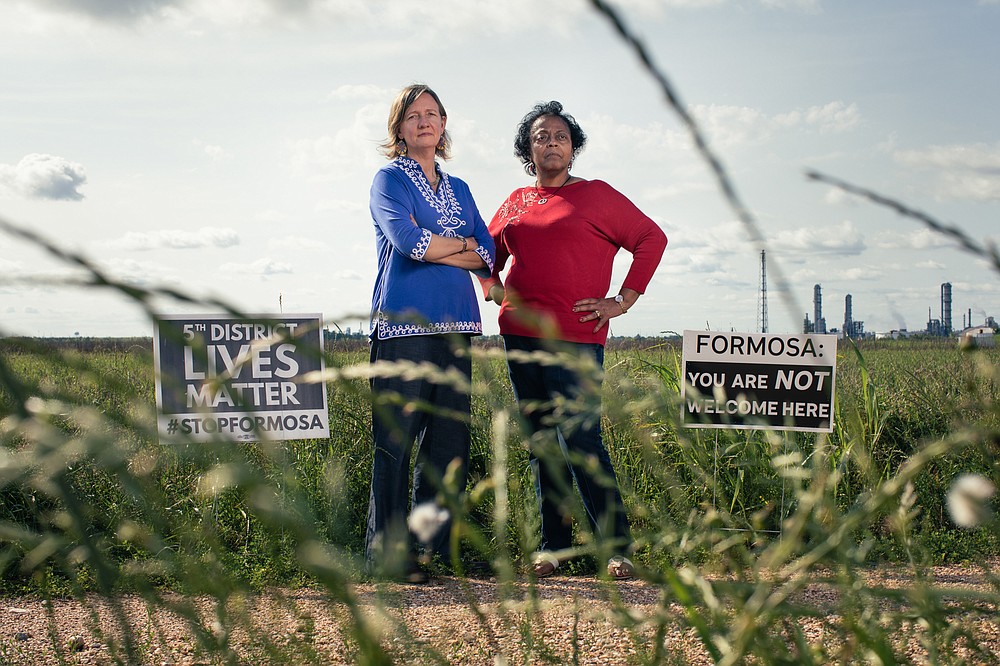 Environmental activist Anne Rolfes, left, and St. James Parish resident Sharon Lavigne are working to stop Formosa's $9.4 billion complex from being built in the community. Lavigne founded a local organization specifically to oppose the project. MUST CREDIT: Photo for The Washington Post by Camille Lenain 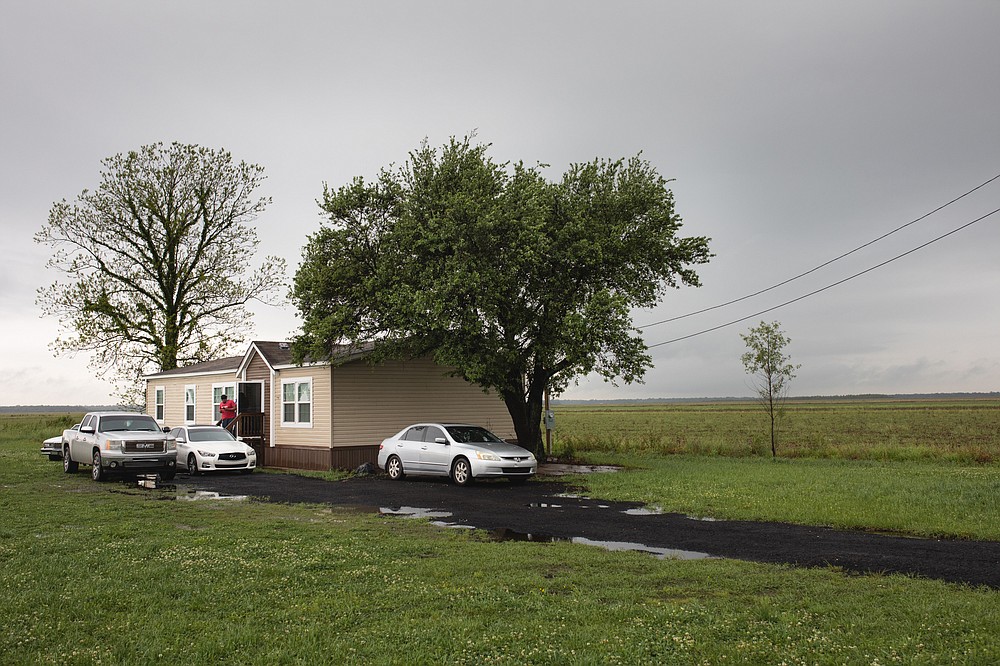 Jamin Jones lives in Welcome, La., less than a mile from the Formosa site. MUST CREDIT: Photo for The Washington Post by Camille Lenain 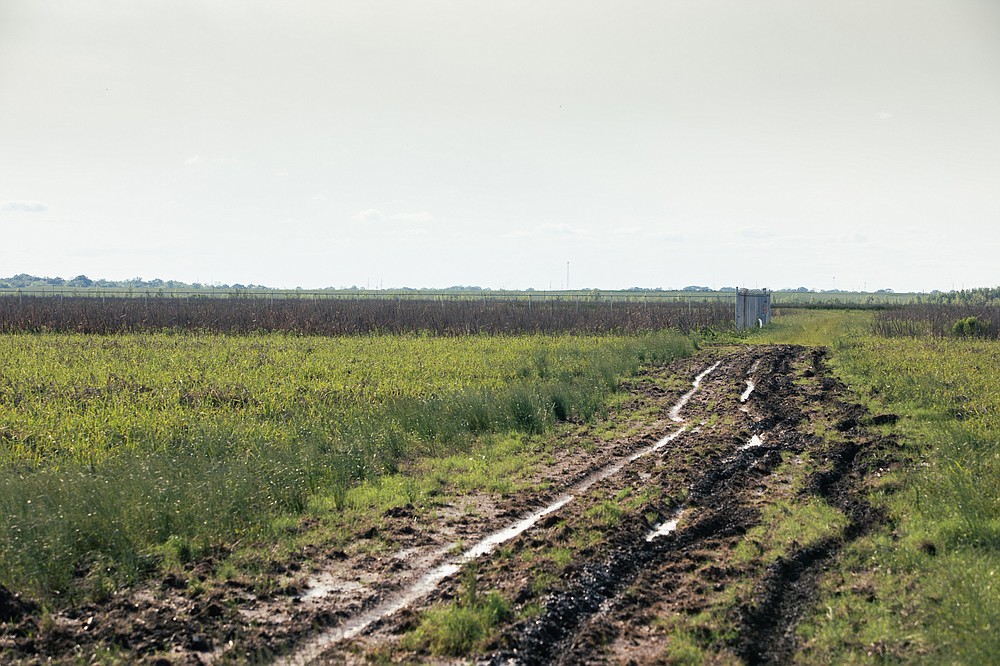 Ancestral burial grounds occupy part of the Formosa property. MUST CREDIT: Photo for The Washington Post by Camille Lenain 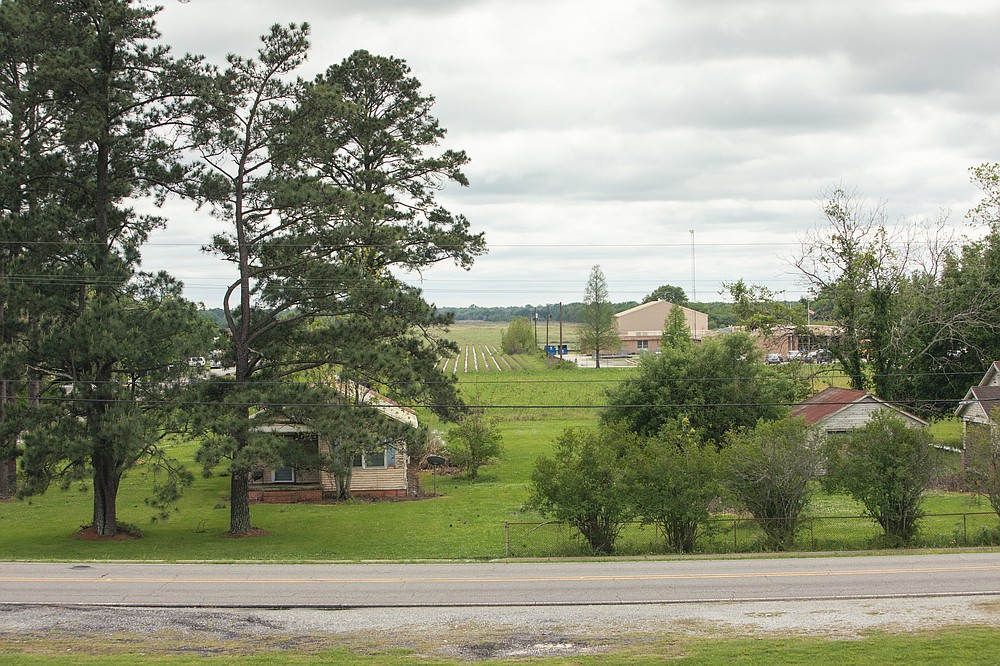 These houses, school and farmland in Welcome, La., are not far from the proposed Formosa project. MUST CREDIT: Photo for The Washington Post by Camille Lenain
ADVERTISEMENT