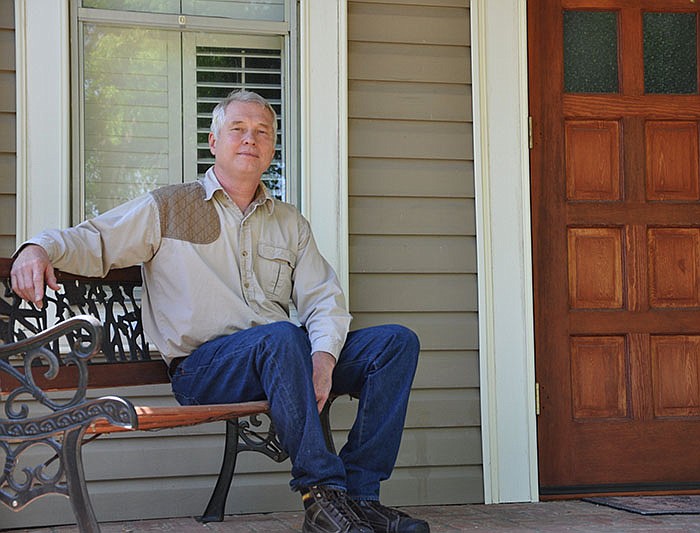 David Benson, pastor of New Prospect Landmark Missionary Baptist Church in Sulphur Rock, stands in front of his home in near Tuckerman, Ark. on Monday, April 19. Benson said he would not encourage members of his congregation to get vaccinated for the coronavirus. (Arkansas Democrat-Gazette/Lara Farrar)

SULPHUR ROCK -- At the start of the pandemic last spring, David Benson, pastor of New Prospect Landmark Missionary Baptist Church, moved his Sunday service outside, preaching to his 40 or so congregants from a nearby parking lot.

Once it got too hot, Benson moved his sermons back inside. He continues to encourage church members to wear masks if they want, to socially distance and to not show up if they feel sick.

But there is one thing he says he will not encourage his congregation to do: get vaccinated against the coronavirus.

"When it ain't proven, how do we even know [the vaccine] is even doing what they say?" Benson said. "People don't want to take something or do something because someone said you got to do this."

In Arkansas, public interest in getting covid-19 vaccinations has waned substantially in recent weeks, leaving state leadership and public health officials with the task of trying to figure out ways to persuade people to get the shots against the backdrop of rising cases in some parts of the nation and the increasing spread of more transmissible variants of the coronavirus.

While new cases of covid-19 have remained relatively low in Arkansas, there have been small spikes over the past couple of weeks. Testing of the cases indicates that many of them are caused by variants of the virus, raising concern that the state is in a race against time before another wave of the disease hits.

"I am very concerned about Arkansas having an additional wave of covid-19," Dr. Jennifer Dillaha, the state's epidemiologist, said. "I am hopeful that it will not occur, but I recognize it is very possible that it will occur."

Nationally, Arkansas is ranked near the bottom in terms of percentage of the population vaccinated, according to data that is tracked by The New York Times.

State officials say the goal is to vaccinate about 70% of those who are eligible for the shots.

As of Saturday, a little more than 40% of those eligible for a vaccine were either partially or fully vaccinated, according to data from the Arkansas Department of Health.

A covid-19 forecast for Arkansas, released April 16 by the University of Arkansas for Medical Sciences' Fay W. Boozman College of Public Health, found that the percentage of county populations fully vaccinated as of April 8 ranged from 4% to 26%.

"If we flip the vaccination statistic around, 94 percent to 74 percent of county populations are at risk for covid-19 infection or reinfection with the virus," the UAMS report said.

The state is sitting on a stockpile of unused doses.

Pharmacists say they have hundreds in freezers that have expiration dates within several months. Some have stopped ordering new shipments of the shots. Each week, dozens of slots for vaccination appointments go unfilled -- both in urban areas such as Little Rock and in smaller cities such as Searcy.

"I have seen a dramatic drop in first-shot requests," Joe Davis, a pharmacist and owner of Joe's Pharmacy Express in Searcy, said. "I have been fortunate not to waste many shots, but I think if the trend continues, there will be more vials wasted."

"Hesitancy is a challenge all across the United States," Gov. Asa Hutchinson said during his weekly covid-19 address Tuesday. "I believe there is a greater challenge in Southern states and in rural states. I think there is greater resistance there that we have to overcome."

For weeks, during his regular covid-19 update, the governor has been pleading with Arkansans to get vaccinated. "We need everyone to participate in increasing the demand for getting a shot," Hutchinson said.

To be sure, vaccine hesitancy exists across diverse demographics. However, national surveys indicate the highest resistance in states such as Arkansas is in rural, predominantly conservative, white communities like Sulphur Rock, where Benson has his church.

Interviews conducted by the health nonprofit Kaiser Family Foundation found that out of 1,000 rural residents across the country, 3 in 10 said they will "definitely not" get vaccinated or will only do so if required.

"The groups within rural communities that are the least likely to report either already receiving a vaccine or planning to do so as soon as possible are Republicans, White Evangelicals, essential workers in fields other than health care and young adults 18 to 49," the Kaiser Family Foundation said in a report published earlier this month.

"Rural residents are also less likely to say they are worried about themselves or their family members getting sick from the coronavirus or that they wear a mask most of the time when they leave their house," the health nonprofit reported.

Personal freedoms, underscored by evangelical beliefs that God chooses when it is someone's time to die, combined with skepticism about the vaccines generally appear to be driving decisions not to get the shots.

"I figured if I was going to get covid, then I already got it," he said. "Stuff has been said about wearing a mask will keep you from getting covid. I know too many people who have worn masks and still got it."

The challenge that public health officials face involves trying to understand why these particular demographics are unwilling to get vaccinated and figuring out how to change people's minds.

These efforts are complicated by a pandemic that has been largely politicized from the start and by the dissemination on social media of misinformation and conspiracy theories surrounding not only the pandemic itself but also the safety and efficacy of covid-19 vaccines.

It is a challenge that public health officials have never faced before.

"This is the first major pandemic that is playing out against the backdrop of social media, so this will indelibly change our public health practice moving forward," said Brian Castrucci, president and CEO of the de Beaumont Foundation, a Maryland-based charitable group that focuses on public health solutions.

"We can be doing things that are scientifically correct, that are good public health practices, and the next thing you know, someone with 10 million Twitter followers tells you this whole thing is a hoax," Castrucci said.

The de Beaumont Foundation conducted a survey of hundreds of Republican voters aimed at finding ways to mitigate resistance to vaccines. The research found vaccine hesitancy decreased when those in this demographic subset received information from people they trust: doctors, family members, even pastors.

"We believe that the right messages from the right messengers can save lives," Castrucci said. "We heard pretty loud and clear that people want apolitical messengers. They want to hear from their doctors, not their politicians."

"We want to see people from the pulpit at their sermons talking about safety and the vaccine, sharing facts about doing the right thing for you and your family so we can get back to doing the things we want to do," Castrucci said.

It is crucial, Castrucci said, to make sure not to use language that demeans those who do not want to get vaccinated.

"The most powerful statement you can make is, 'I understand you have concerns about the vaccine. What questions can I answer for you?'" he said. "Not that, 'You are stupid. You are a Neanderthal.' That does not help."

Even with efforts to reach people via trusted members of the communities where they live, the issue is further complicated by continued news about the safety of vaccines and whether additional booster shots will be needed sometime in the future.

Earlier this month, news broke that the vaccine produced by Johnson & Johnson led to cases of blood clots in about half a dozen patients. That revelation resulted in a pause in the vaccine's distribution while regulators assessed its safety and whether warnings needed to be issued with its administration. The pause on the vaccine ended last week, with regulators saying Johnson & Johnson vaccinations could continue but with warnings about the health risks.

Both Pfizer and Moderna, producers of two-dose vaccine regimens, have announced a third booster shot may be needed in the coming months.

Meanwhile, public health officials still advise those who are fully vaccinated to wear masks in public, to socially distance and to be cautious in large gatherings.

While transparency is vital with the vaccines, which received emergency use authorization from federal regulators in record time, the ongoing changes in information could be adding to resistance to getting the shots.

"It is not a coherent story," Ben Amick, associate dean for research at UAMS' Boozman College of Public Health, said. "This is an imperfect-knowledge world that we live in now. The unprecedented acceleration of information has not made it easy."

"We know a lot, but the coherent story could change in another two weeks with another study that comes out," Amick said. "That is the problem."

He added: "We have a big problem. We have to figure out how to solve it, and if we don't solve it, we will be in a constant state of living with covid."

The Arkansas Department of Health is working to solve the vaccine hesitancy problem. The Health Department is reaching out to independent doctors' offices to provide information about vaccines and to offer supplies of vaccines to clinics willing to administer them.

The department is also embarking on a two-year, $7 million media campaign, part of which showcases testimonials from Arkansans -- farmers, senior citizens, college football coaches -- on the importance of getting vaccinated.

It is unclear whether the campaign has had much of an impact so far.

"We have gotten good anecdotal feedback," Meg Mirivel, a spokesperson with the state Health Department, said. "People have seen them and talked about how it impacts them."

An even bigger challenge may be convincing young people, experts say.

"You can't make a healthy 18-year-old drive an hour-and-a-half to get the vaccine," Castrucci of the de Beaumont Foundation said. "They are not going to wait in a three-hour line."

Dillaha, the state epidemiologist, said that earlier in the pandemic, public health officials should have stressed the long-term problems covid-19 causes for many who contract it. She said this might have helped persuade more people, particularly in younger demographics, to get vaccinated.

"One thing I wish we were able to do early on was to help people have a more realistic picture of the illness of covid-19," Dillaha said. "It is possible to have long-term effects of the illness, even for people who just had mild disease, including younger people."

As demand for the vaccines continues to level off, or even slow, public health experts are faced with the possibility that those who want shots have gotten them, and that those who have not gotten shots may either just be waiting it out, may not feel any urgency for getting them or may never get them at all.

"We have a lot of people being offered the vaccine who don't take it," Amick of UAMS said. "My hope is that the people who have not gotten it yet will realize they should get it, that we will change social norms, that everyone will start to want it and that will drive it."

The only way Benson, the pastor in Sulphur Rock, said he might consider getting a shot is if he knew 100% that covid-19 would kill him and 100% that the covid-19 vaccine would save him from dying.

Even then, he didn't express certainty about getting vaccinated.

"God gives us enough sense to know what to do and not to do," Benson said.