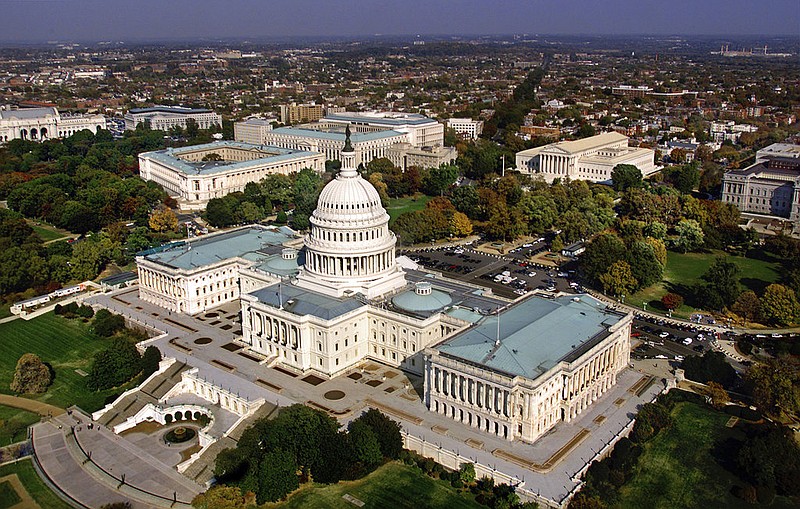 The Capitol in Washington, D.C., is shown in an undated aerial view. (AP/J. Scott Applewhite)

WASHINGTON -- Thirteen months after covid-19 turned the District of Columbia into a ghost town, Arkansas business leaders say they are eager to go to Capitol Hill to meet with lawmakers.

Last week, members of the Fort Smith Regional Chamber of Commerce held their annual Washington Fly-In, returning to the city after a one-year hiatus.

"We reached out to our delegation, and they all said, 'Absolutely, we'd love to have you,'" said Tim Allen, the chamber's president and CEO.

Eight people made the trip. Private indoor gatherings in Washington are currently capped at 10 people.

Rather than flying with one of the major airlines, the Fort Smith group took a private plane, arriving Monday and returning to Fort Smith the following evening.

"This was the first one ... so that's exciting," Boozman said. "Hopefully, we're seeing some signs of returning to normalcy."

The Fort Smith contingent is the first but won't be the last, Boozman predicted.

"I think others will be following," he said.

The U.S. Capitol was closed to the public on March 12, 2020. Since then, the hallways have been silent and the spectator galleries empty.

Because of the public health emergency, nonstop commercial flights from Arkansas were canceled; travel calendars were wiped clean.

Given the social-distancing requirements, in-person meetings were largely replaced by fiber-optic interactions.

"So much of this now is being done by telephone or Zoom because of the difficulties of getting into Washington," Boozman said.

Even now, the Capitol is closed to tours; security remains heightened in the wake of the Jan. 6 attack by supporters of then-President Donald Trump.

Rather than roaming the halls of Congress, the Fort Smith delegation met with lawmakers off site.

Before flying back to western Arkansas, they hosted a dinner at the Capitol Hill Club, a stone's throw from the House office buildings.

The Fort Smith chamber has made annual trips to Washington for more than 60 years, Allen said.

This year's topics included the city's costly sewer system improvements. Under a 2015 consent decree between the federal Environmental Protection Agency, the U.S. Department of Justice and the city, Fort Smith is required to make more than $450 million in improvements to its system.

Last year, the city was given a five-year extension to fulfill its obligations.

The group also discussed efforts to host Singapore Air Force F-35 planes as well as an F-16 squadron at Fort Smith Regional Airport. If successful, Singapore's pilots would train there.

"At the end of the day, decisions made in D.C. affect all of us," Allen said. "The only way, I think, to be effective on federal issues and some state issues is to go straight to the source and have good conversation and talk about what our needs are and how they can help."

With covid-19 cases dropping and vaccinations increasing, other organizations are also looking to resume face-to-face meetings with elected officials.

"We are planning to go this year for sure, sooner rather than later," said Randy Zook, president and CEO of the Arkansas State Chamber of Commerce.

The group, which had to scrub its 2020 trip, is "working with DC offices to pick a good time," he added.

In April, American Airlines resumed its nonstop flight from Little Rock to Washington's Reagan National Airport. On a recent trip, seats on the plane were plentiful.

Commercial passenger activity at Reagan dropped 82.2% between February 2020 and February of this year, according to the Metropolitan Washington Airports Authority.

The airport had 128 daily domestic departures, down from 561 the previous year.

Covid-19 continues to affect the city's subway service as well. Rail ridership in February was down 86.7% from February 2020, according to the Washington Metropolitan Area Transit Authority.

Given the continuing covid-19 restrictions, some Arkansas groups opted for virtual fly-ins this year.

The Electric Cooperatives of Arkansas, which typically brings one of the largest contingents to Washington, communicated with lawmakers over the Internet earlier this month.

While technology is great, "nothing takes the place of a face-to-face meeting," he added.