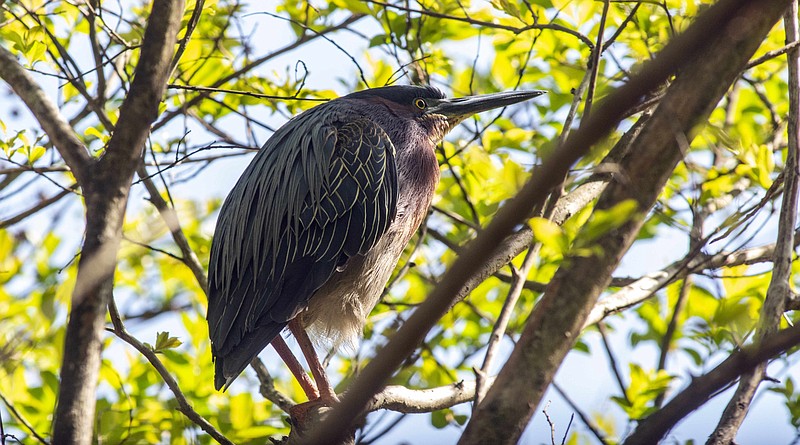 There are about 2,400 students at Little Rock Central High School.

There are also three green herons.

Near the tippy top branches of a tall crape myrtle on a windy morning in April, one of the herons sits on a flimsy nest. The best spot to catch a glimpse of it is through the tall windows of the guidance counselor's conference room on the second floor.

Central High Principal Nancy Rousseau points out the bird, but from this angle below it's hard to distinguish, even on its nest.

Picture a heron and the image of a tall, gawky creature standing in a swamp might come to mind. Not so for the green heron.

They are squatty, about the size of a crow. Their necks are often held drawn against their bodies, then extend when they are after food or picking a twig for their nest with their dagger-like bill. They seem dark from a distance, but up close their feathers range from bluish green to chestnut.

This green heron, Rousseau says, has been coming to the same nest since 2015. Observers believe its offspring have taken up residency in another crape myrtle just a few feet away, she says.

Central High Vice Principal Thomas Noble is a former biology teacher. He joined the staff in July 2016 and identified the bird as a green heron the next spring.

His first sighting of the bird this year was April 6.

"I don't know if she has eggs yet," he says. "But she has prepared her nest and they have had courtship displays."

This green heron and its mate show up dutifully each spring, Rousseau says.

"They are here until they have their chicks," Noble adds, "then they raise their chicks and leave, and we don't see them again until the next spring."

Green herons like feasting on small frogs, fish, bugs, crawfish, etc.; Noble and Rousseau say the birds will feed in the nearby reflecting pool.

"That's perfect," says Karen Rowe, certified wildlife biologist and nongame bird program coordinator with the Arkansas Game and Fish Commission during an interview a few days later. "The green heron is the smallest true heron, so with their shorter legs they prefer shallow water. That's one of the things that makes them adaptable to suburban and urban areas."

Rowe says that along with munching at the reflecting pool on campus, the herons may also may be feeding in marshy areas near the Arkansas River.

This is a clever species, and not just because they are hanging out on a school campus for part of the year.

"They will actually use tools and will fish with bait," Rowe says. "That would be so fascinating to see."

With their compact size, green herons can be hard to detect.

The heron outside the window settles into her nest for a bit, then gets out to pick small branches nearby and hops back to the nest with them.

"The dad was here yesterday," Rousseau says. "We saw both of them."

Heather Rainbolt is a testing coordinator at the school.

"Are they back?" she asks, as she walks into the conference room. "Every year they come back during [advanced placement] testing. We're always waiting for them."

The birds are a popular attraction for students.

"The whole school is into this," Rousseau says.

"They will be loose, communal nesters," Rowe says. "You might have 10 nests scattered around several acres."

Outside, Noble uses an app on his phone to play a recording of the green herons' distinctive "skeow" call beneath the tree with the two herons, which launches smaller birds nearby into a chorus.

Green heron males and females look alike and are monogamous, though when a mate dies, the survivor will find another, Rowe says.

Not a whole lot is known about their breeding habits.

"Because they're not extremely rare, no one has done a lot of banding research on them," Rowe says. "There are some gaps in our knowledge about the species."

Both sexes will contribute to nest-building, Rowe says, and males will also help incubate eggs, often in the afternoon.

It takes about 20 days for green heron eggs to hatch and then another 20 to 25 days for the chicks to fledge and attempt to fly.

Those attempts can be awkward. Young birds in general — from eagles and cardinals to green herons — often leave the nest by accident and end up on the ground.

"It's perfectly normal for one to not be able to fly and be found on the ground under the tree," Rowe says. "The adults will feed them on the ground or under a nearby bush. People just need to leave them alone."

If predators are around, Rowe recommends hanging a basket in the tree and placing the chicks inside it.

In 2019, two chicks fell from the nest and died, Rousseau says. "We went berserk," she says.

Herons are hardy travelers. They will nest here and, after their young have fledged, will stay around Arkansas until September or so before heading south.

"They spend the winters as far away as Venezuela, Mexico, the Caribbean," Rowe says. "And then they have to make it back up here to nest."

For Rowe, news of green herons finding a happy home at Central has been a change of pace from calls she normally gets about the species.

"It's neat to hear people are excited about them, because most of the time I get calls complaining about them," she says.

Homeowners who may have had no idea that green herons were nearby suddenly find droppings and small, dead fish on the ground.

"People who have neatly maintained yards and expensive vehicles don't appreciate them," Rowe says. "You can imagine that they can make a mess."

Rousseau and Noble say they haven't named the birds, nor do they plan to change Central High's mascot from the Tigers to the Green Herons. But the yearly visitors are a welcome addition each spring. And they aren't the only waterfowl hanging out at a local school.

Rowe got a call recently about a Yellow-Crowned Night Heron nesting at Sherwood Elementary.

"I guess all these herons are wanting to get educated," she says with a laugh. 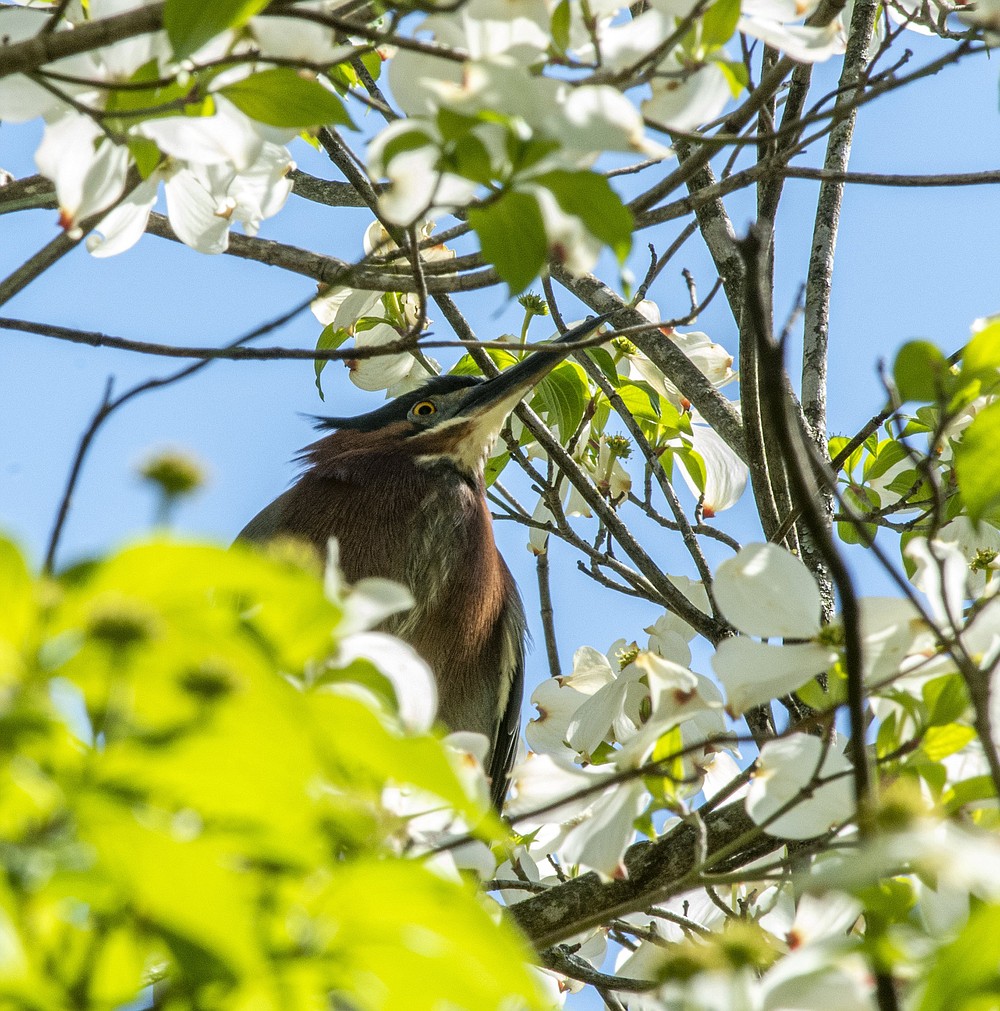 A green heron in its nest at Little Rock Central High School. Each spring since 2015, the heron has returned to this nest to lay its eggs. (Arkansas Democrat-Gazette/Cary Jenkins)