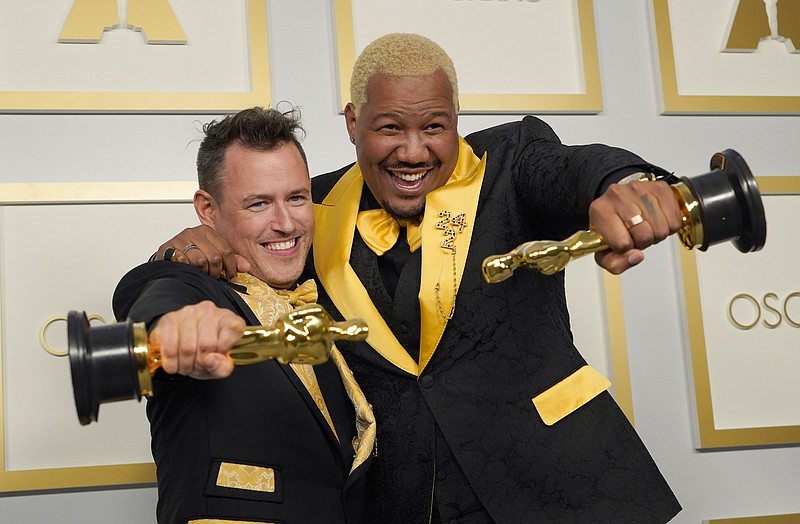 Chloe Zhao's "Nomadland," a wistful portrait of itinerant lives on open roads across the American West, won best picture Sunday at the 93rd Academy Awards, where the China-born Zhao also became just the second woman to win best director and the first woman of color.

The "Nomadland" victory, while widely expected, nevertheless capped the extraordinary rise of Zhao, a lyrical filmmaker whose winning film is just her third, and which -- with a budget less than $5 million and featuring a cast populated by nonprofessional actors -- ranks as one of the most modest-sized movies to win Hollywood's top honor. Only Kathryn Bigelow, 11 years ago for "The Hurt Locker," had previously won best director.

The most ambitious award show held during the pandemic, the Oscars rolled out a red carpet and restored some glamour but with a transformed telecast.

It was perhaps the most diverse Academy Awards ever, with more women and more actors of color nominated than ever before -- and Sunday brought a litany of records and firsts across many categories. It was, some observers said, a sea of change for an awards harshly criticized as "OscarsSoWhite" in recent years, leading the film academy to greatly expand membership.

The ceremony -- fashioned as a movie of its own and styled as a laid-back party -- kicked off with opening credits and a slinky Regina King entrance, as the camera followed the actress and "One Night in Miami" director in one take as she strode with an Oscar in hand into Los Angeles' Union Station and onto the stage. Inside the transit hub, where the trains kept running, nominees sat at cozy, lamp-lit tables around an intimate amphitheater. Some moments -- like Glenn Close getting down to "Da Butt" -- were more relaxed, but the ceremony couldn't just shake off the past 14 months.

Daniel Kaluuya won best supporting actor for "Judas and the Black Messiah." The win for the 32-year-old British actor who was previously nominated for "Get Out," was widely expected. Kaluuya won for his fiery performance as the Black Panther leader Fred Hampton.

With the awards capping a year of national reckoning on race and coming days after former Minneapolis police officer Derek Chauvin was convicted for killing George Floyd, police brutality was on the minds of many attendees.

Travon Free, co-director of the live-action short winner "Two Perfect Strangers," wore a suit jacket lined with the names of those killed by police. His film dramatizes police brutality as an inescapable time loop like a tragic "Groundhog Day" for Black Americans.

Best supporting actress went to Yuh-Jung Youn for the matriarch of Lee Isaac Chung's tender Korean-American family drama "Minari." The 72-year-old Youn is the first Asian actress to win an Oscar since 1957 and the second in history.

Hairstylists Mia Neal and Jamika Wilson of "Ma Rainey's Black Bottom" became the first Black women to win in makeup and hairstyling. Ann Roth, at 89 one of the oldest Oscar winners ever, also won for the film's costume design.

The night's first award went to Emerald Fennell, the writer-director of the provocative revenge thriller "Promising Young Woman," for best screenplay. Fennell, winning for her feature debut, is the first woman to win solo in the category since Diablo Cody ("Juno") in 2007.

Sunday's pandemic-delayed Oscars bring to a close the longest awards season ever -- one that turned the season's industrial complex of cocktail parties and screenings virtual. Eligibility was extended into February of this year, and for the first time, a theatrical run wasn't a requirement of nominees. Some films -- like "Sound of Metal" -- premiered all the way back in September 2019. The biggest ticket-seller of the best picture nominees is "Promising Young Woman," with $6.4 million in box office. 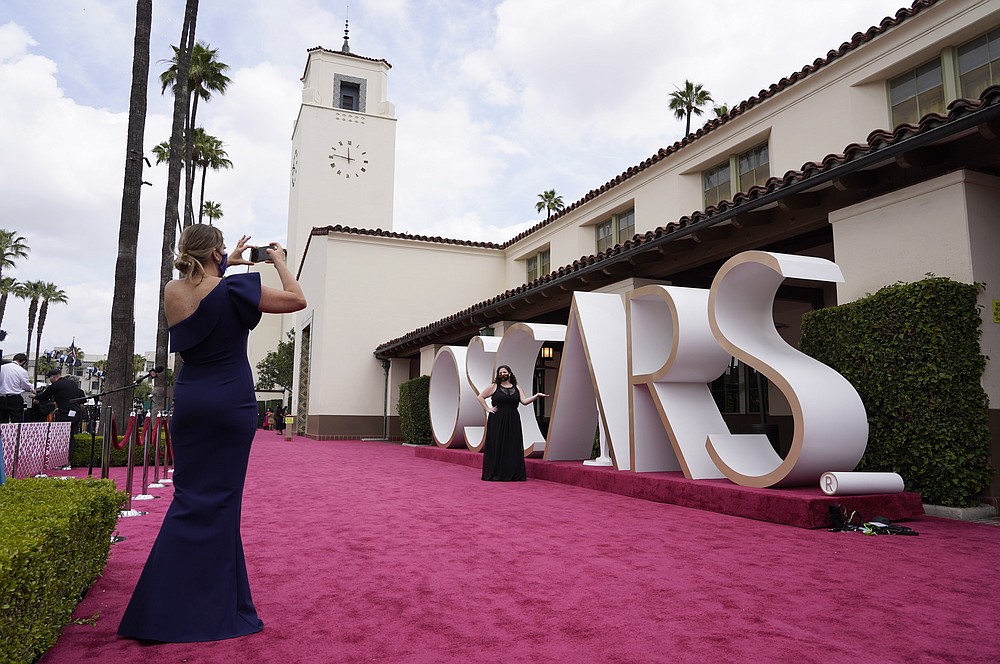 A view of the red carpet appears before the start of the Oscars on Sunday, April 25, 2021, at Union Station in Los Angeles. (AP Photo/Chris Pizzello, Pool) 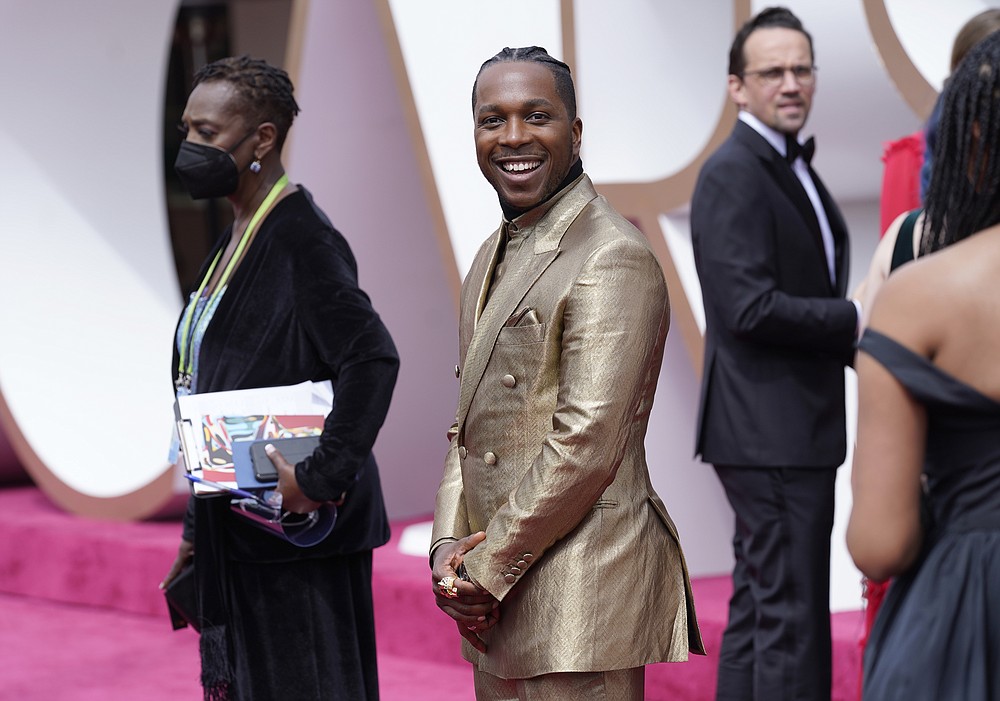 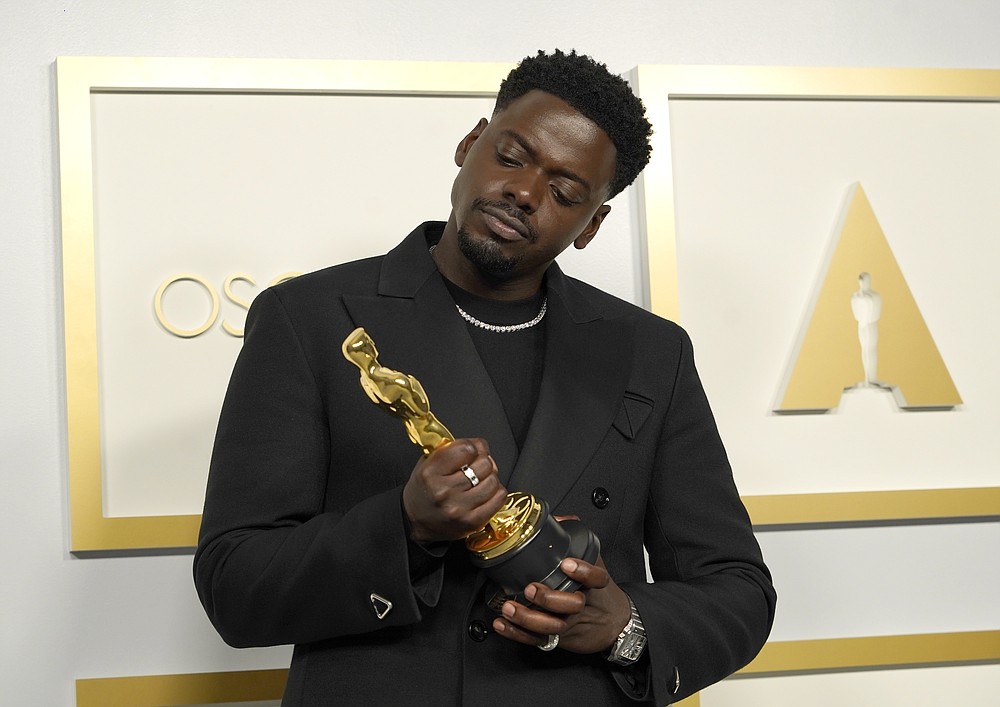 Daniel Kaluuya, winner of the award for best actor in a supporting role for "Judas and the Black Messiah," poses in the press room at the Oscars on Sunday, April 25, 2021, at Union Station in Los Angeles. (AP Photo/Chris Pizzello, Pool) 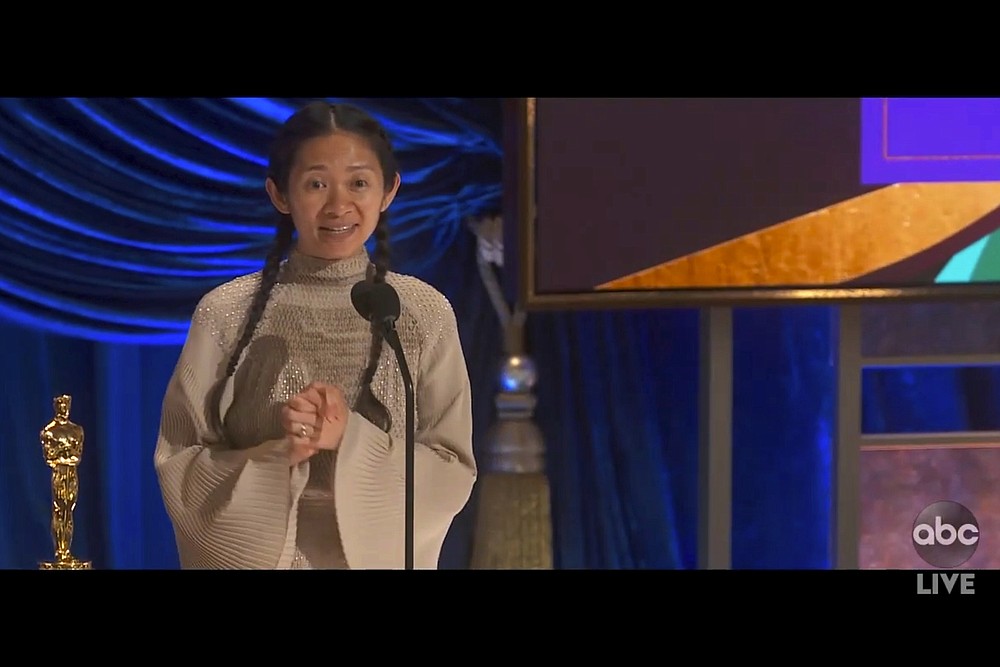 In this video image provided by ABC, Chloe Zhao accepts the award for best director for "Nomadland" at the Oscars on Sunday, April 25, 2021. (ABC via AP) 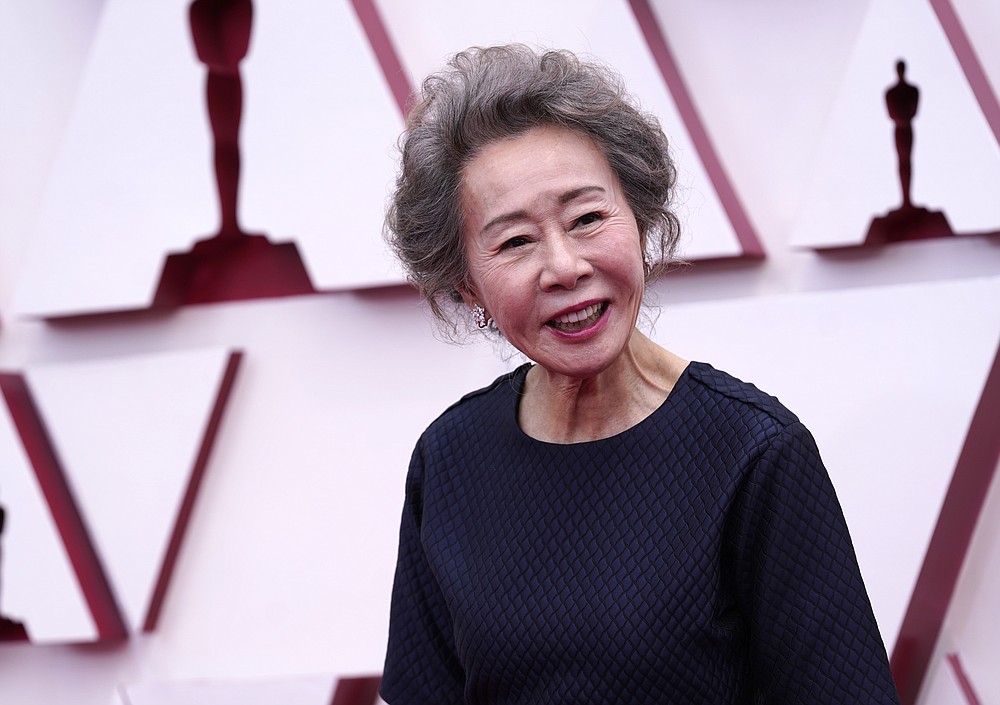 FILE - This combination file photo shows producers Steven Soderbergh, from left, Stacey Sher and Jesse Collins. Soderbergh’s concept for the 93rd Academy Awards show on ABC, Sunday, April 25, 2021, which he’s producing with Sher and Collins, is to treat the telecast not like a TV show but a movie. The base of the show won’t be at the Academy Awards’ usual home, but held at Union Station, the airy, Art Deco-Mission Revival railway hub in downtown Los Angeles. (AP Photo, File) 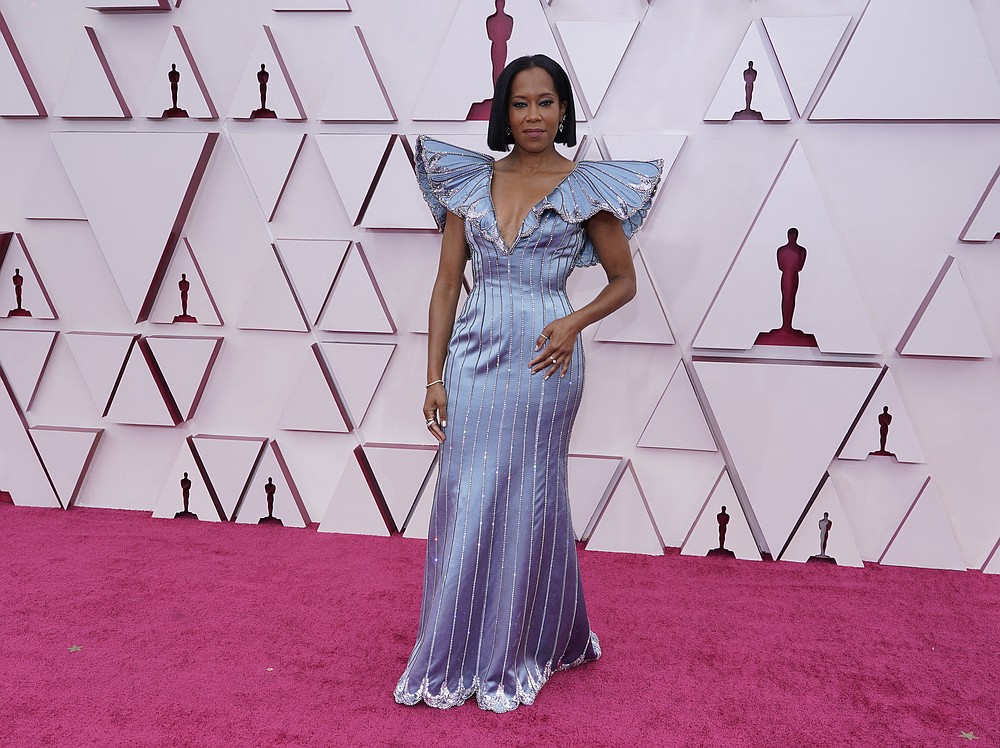 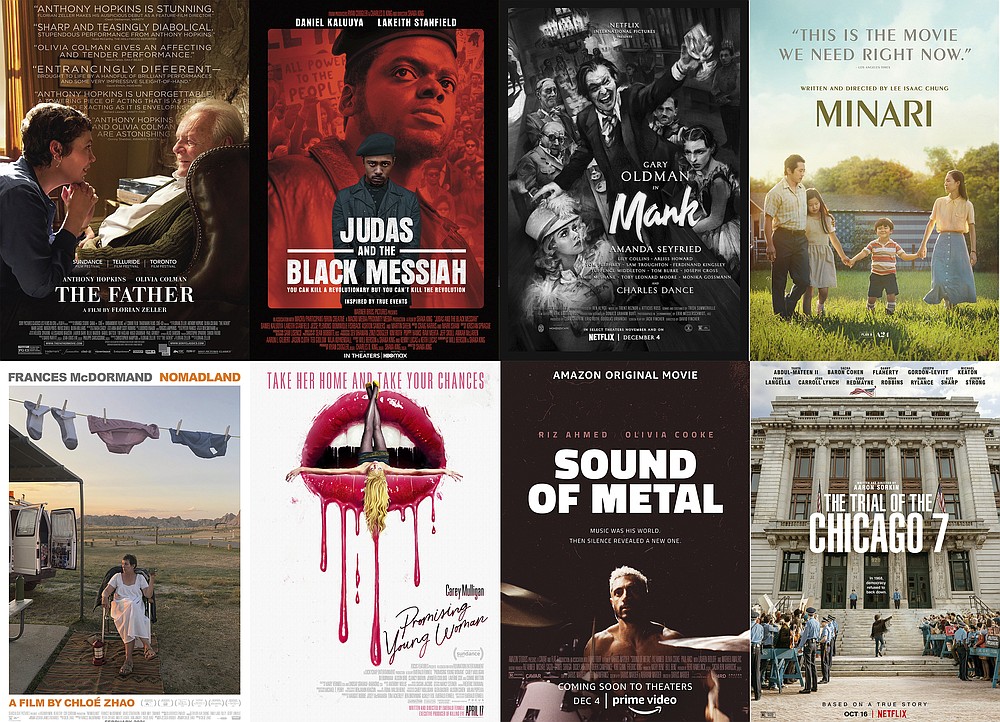 This image released by Focus Features shows Carey Mulligan in a scene from the film "Promising Young Woman." (Focus Features via AP)
ADVERTISEMENT