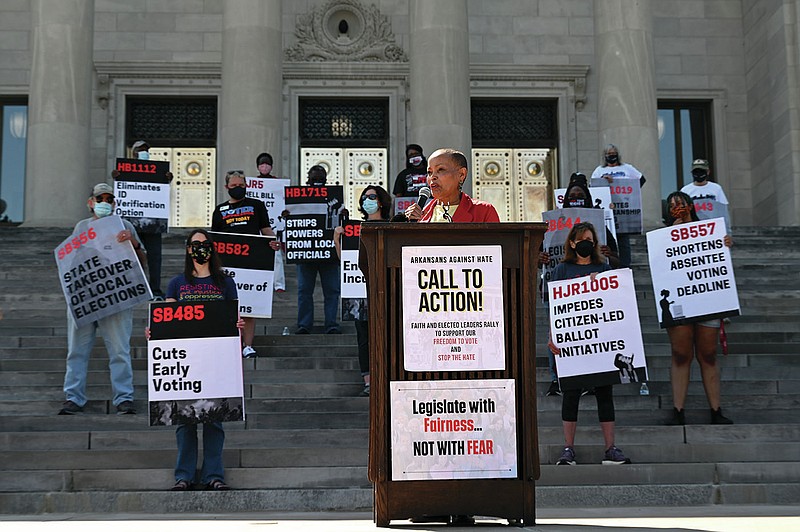 State Senator Joyce Elliott addresses a crowd during a protest at the Arkansas State Capitol on Sunday, April 25, 2021. Voting rights advocates took to the Capitol steps to decry voter suppression measures currently moving through the Arkansas legislature and call on Arkansans to support federal legislation that will protect our right to vote. (Arkansas Democrat-Gazette/Stephen Swofford)

Arkansas pastors and elected officials spoke at a Sunday afternoon rally in front of the Capitol against bills they said are vote suppression measures moving through the state legislative session.

The rally centered around supporting the freedom to vote and stopping hate.

"The right to vote is a legacy passed down from previous generations to ours, and it is to be handed off to those that follow behind us. It is a sacred right, and we must not allow any political chicanery to suppress it," the Rev. C. Dennis Edwards of St. John Missionary Baptist Church on Main Street said to the crowd. "It should not be attenuated. It needs to be strengthened. It should not be made difficult to exercise, but it should be made easy and free and uncomplicated. It is a right of we the people."

While not all bills were referenced directly by the speakers, people in the crowd Sunday passed around flyers made by the political organization Indivisible Little Rock & Central Arkansas with a list of 17 "anti-voter" bills, most of which have already passed in the House and Senate.

Sen. Linda Chesterfield, D-Little Rock, said the bills, as well as other recent legislation regarding transgender youth and the lack of a true hate crimes law is bad for business in the state.

"These old crazy laws are driving Arkansas back to a time when people did not want to come to this state. We are looking at 1957 on steroids," Chesterfield said. "It's the totality of this state and the hateful response to the election of Joe Biden that's killing this state."

Six of the bills listed are sponsored by Sen. Kim Hammer, R-Benton. Hammer said the bills proposed this legislative session around voting were intended as a package and the vast majority were developed with the input from the Association of Counties.

"What drove the vast majority of these bills is the fact that we had elections this year in Arkansas that, through court challenges, revealed some of the weaknesses in our voting system," Hammer said. "Each one of these bills allowed us to have a discussion individually and not have them combined into a massive bill that would be hard to read, hard to digest. We were very transparent in presenting each issue on its own merit and having it be voted up or down."

SB485, which would remove the Monday before Election Day as an early voting option, is on the State Agencies and Governmental Affairs House Committee agenda for 9:30 a.m. today. Hammer said he sponsored the bill because there have been efforts on both sides of the aisle to remove this day and it should have never been part of early voting.

"It creates a burden on clerks and it also creates a disparity across the state," he said.

Those against the bill at the rally Sunday argued that it is a popular voting day and that reducing early voting options makes it harder for voters with multiple jobs or lack of reliable transportation.

Rep. Mark Lowery, R-Maumelle, has also sponsored several bills related to voting, which he said are about improving the integrity of the ballot.

"The listing I saw on this rally was about hate, and I would say these people don't know the first thing of what the definition of hate is," Lowery said.

Pulaski County Clerk Terri Hollingsworth spoke Sunday about the need to stand up to voter suppression and in favor of two federal pieces of voting rights legislation, HR1 and HR4.

"We processed over 28,000 absentee ballot applications and sent those out, when in a normal presidential election year we only do 8,000. And what was our reward?," she said. "Of course it's vote suppression legislation, it's the lies, and it's the attacks on our democracy. We must stand up."