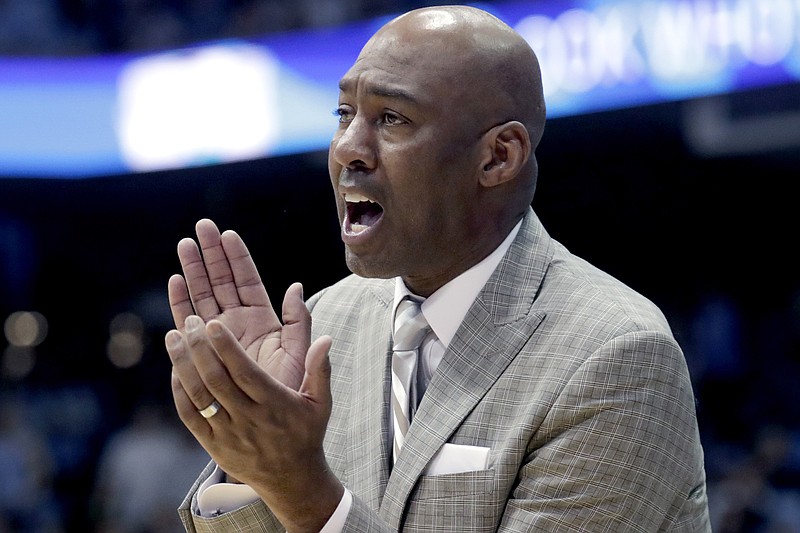 Maryland hired former Wake Forest coach Danny Manning as an assistant on Mark Turgeon's staff on Monday, reuniting two old college teammates. Manning, who played with Turgeon at Kansas in the 1980s, spent the past year as an analyst for ESPN. He was fired by Wake Forest after his team finished with a losing record in five of six seasons and made one NCAA Tournament appearance. Turgeon said Manning has history recruiting in the Washington, D.C., area as well as strong national ties. Manning won the NCAA title and was player of the year at Kansas in 1988, the season after Turgeon left, and was an assistant on Bill Self's staff when the Jayhawks were national champions in 2008. Manning coached at Tulsa from 2012-14 before getting the head job at Wake Forest. Manning, 54, was the No. 1 pick in the NBA Draft in 1988 and played 15 professional seasons.

Former North Carolina big man Walker Kessler is transferring to Auburn. Auburn Coach Bruce Pearl said Monday that Kessler has signed an athletics financial aid agreement to play for the Tigers next season. The 7-1, 245-pound center was a 5-star prospect who averaged 4.4 points, 3.2 rebounds and 0.9 blocks per game as a freshman. Kessler also shot 58% from the floor. He will have four years of eligibility remaining.

Cleveland Cavaliers forward Larry Nance Jr. broke his right thumb in Sunday's loss at Washington and likely will miss the remainder of the season. Nance's injury was one of several suffered by Cleveland players that left the Cavaliers short-handed for Monday night's game against Toronto. Nance, 28, is averaging 9.3 points and 6.7 rebounds in 35 games.

Wall likely out for season

Houston Rockets guard John Wall is likely to miss the rest of the season with a strained right hamstring. Wall was injured Friday against the Los Angeles Clippers. He had an MRI on Monday and was diagnosed with the injury by Dr. Steven Flores. His injury is yet another blow in a difficult season for the Rockets, who at 15-46 have become the NBA's worst team since the trade of superstar James Harden. Houston has 11 games remaining.

Houston Astros starter Jake Odorizzi has been placed on the 10-day injured list with a strained muscle in his right arm, and second baseman Jose Altuve has been activated after a bout with covid-19. Odorizzi left his start Saturday after five pitches with what the team called tightness in his right forearm, and Manager Dusty Baker announced Monday that he had a strained right pronator. Altuve, the 2017 AL MVP, was among five Astros who were placed on the covid-19 list April 14. The other four returned within days, but Altuve remained out. He cleared health and safety protocols Friday and revealed Saturday that he had tested positive for covid-19 but did not have any symptoms. Odorizzi is 0-2 with a 10.13 ERA in 3 starts this season.

Jeff Bridich is stepping down as general manager of the Colorado Rockies, ending a tumultuous tenure that included two playoff appearances and a falling out with Nolan Arenado that ultimately led to the star third baseman's offseason trade. The Rockies announced Monday that the decision was a mutual agreement with Bridich, who was in his seventh season as GM. The team will appoint an interim general manager for the rest of the season before launching a search following the postseason. The Harvard-educated Bridich joined the organization in 2004 and rose through the ranks. He was named senior director of baseball operations in 2006 and later held the position of senior director of player development. He was promoted to general manager in October 2014.

Formula One will debut sprint qualifying races at three grand prix after an agreement with all 10 teams and governing body the FIA. The sprints will replace the standard qualifying, determining the starting grid for the following day's grand prix. F1 said on Monday two European venues and one non-European are set to stage the shorter format, though they were yet to be announced. A qualifying session on the Friday after the first free practice will determine the grid for Saturday's sprint qualifying. The top three finishers will also receive points toward the championship. The first-place qualifier will receive three points, second place two points and third place one point.

Millman moves on in Munich

John Millman won an all-Australian match against Alexei Popyrin 7-6 (3), 3-6, 7-5 to move into the second round of the Munich Open on Monday. The eighth-seeded Millman saved 13 of 15 break points as he needed almost three hours to overcome Popyrin. Millman is coming off three consecutive second-round losses since the European clay season began, and will face Guido Pella in the second round. Pella was leading 6-0, 2-0 in his first-round match with Egor Gerasimov when the Belarusian retired. Lucky loser Ricardas Berankis earned a second-round meeting with top-seeded Alexander Zverev after beating wild card Maximilian Marterer 7-6 (10), 6-3. Federico Coria will take on third-seeded Australian Open semifinalist Aslan Karatsev after beating Cedrik-Marcel Stebe 6-3, 3-6, 6-2 in a match which saw seven consecutive breaks of serve in the first set.