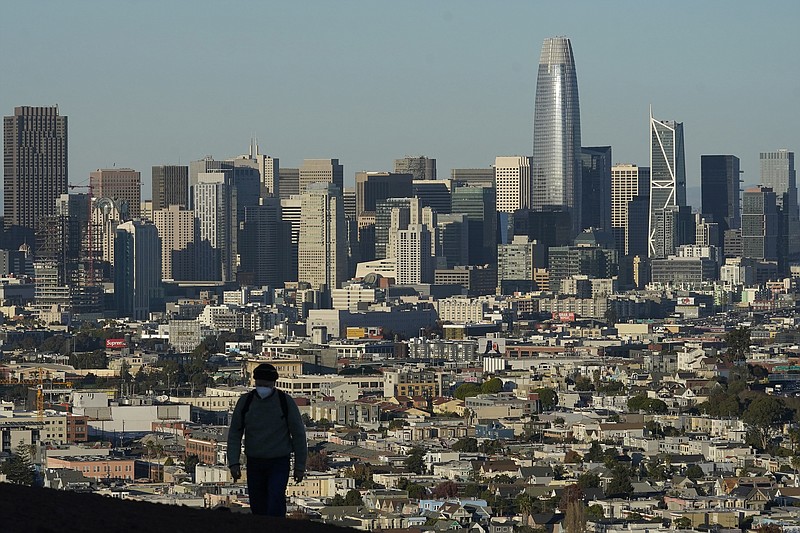 FILE - In this Dec. 7, 2020, file photo, a person wearing a protective mask walks in front of the skyline on Bernal Heights Hill during the coronavirus pandemic in San Francisco. The first numbers from the 2020 census show southern and western states gaining congressional seats. The once-a-decade head count shows where the population grew during the past 10 years and where it shrank. (AP Photo/Jeff Chiu, File)

WASHINGTON -- U.S. population growth has slowed to the lowest rate since the Great Depression, the Census Bureau said Monday, as Americans continued their march to the South and West and one-time engines of growth, New York and California, lost political influence.

Altogether, the U.S. population rose to 331,449,281 last year, the Census Bureau said, a 7.4% increase that was the second-slowest ever. Experts say that pace reflects the combination of an aging population, slowing immigration and the scars of the Great Recession more than a decade ago, which led many young adults to delay marriage and families.

The new allocation of congressional seats comes in the first release of data from last year's headcount. The numbers generally chart familiar American migration patterns: Texas and Florida, two Republican Sunbelt states, added enough population to gain congressional seats as states like New York and Ohio saw slow growth and lost political muscle. The report also confirms one historic marker: For the first time in 170 years of statehood, California is losing a congressional seat, a result of slowed migration to the nation's most populous state.

[Video not showing up above? Click here to watch » https://www.youtube.com/watch?v=S46UaaQ8Xek]

The state population figures, known as the apportionment count, determine distribution of $1.5 trillion in federal spending each year. They also mark the official beginning of once-a-decade redistricting battles. The numbers released Monday, along with more detailed data expected later this year, will be used by state legislatures or independent commissions to redraw political maps to account for shifts in population.

The legal deadline for turning in the apportionment numbers was Dec. 31, but the Census Bureau pushed back that date to April because of challenges caused by the pandemic and the need for more time to correct not-unexpected irregularities.

More detailed figures will be released later this year showing populations by race, Hispanic origin, gender and housing at geographic levels as small as neighborhoods. This redistricting data will be used for redrawing precise congressional and legislative districts.

President Joe Biden sent Monday's numbers to the Capitol, where the House clerk has 15 days to notify governors.

The new numbers contain some surprises. Though Texas and Florida grew, the final census count had them each gaining one fewer seat than expected. Arizona, another fast-growing state that demographers considered a sure bet to pick up a new seat, failed to get one. All three states have large Hispanic populations that represent about half their growth, and this could be an early sign that Hispanics shied away from the Trump administration's count.

Still, Thomas Saenz, president of the Mexican American Legal Defense and Educational Fund, said he wasn't ready to "sound the alarm" over the underperformance of states with large Hispanic populations. He noted that he believes Hispanic growth helped states like Colorado and Oregon each gain one seat and prevented states like New York and Illinois from losing more.

Congressional reapportionment is a zero sum game, with states divvying up the 435 House seats based on small population advantages. If New York had counted 89 more residents, the state would have kept its seat and Minnesota would have lost one, officials said. Minnesota, which had the nation's highest self-response rate, also secured a House seat in 2010.

In contrast, though Democrats control the process in Oregon, Democratic lawmakers there have agreed to give Republicans an equal say in redistricting in exchange for a commitment to stop blocking bills. In Democratic Colorado, a nonpartisan commission will draw the lines, meaning the party won't have total control in a single expanding state's redistricting.

Meanwhile, Americans continue to move to GOP-run states. For now, that shift provides the Republicans with the opportunity to shape new congressional districts to maximize the influence of their voters and have a major advantage in upcoming elections -- possibly enough to win back control of the U.S. House.

But in the long term, it's not clear the migration is good news for Republicans. Many of the fastest growing states are increasingly competitive political battlegrounds where the new arrivals -- including many young people and people of color -- could at some point give Democrats an edge.

"What's happening is growth in Sunbelt states that are trending Democratic or will soon trend Democratic," said William Frey, a demographer at the Brookings Institution in Washington.

That means Republicans may be limited in how many favorable seats they can draw as Democrats move to their territory.

The overall numbers confirm what demographers have long warned -- that the country's growth is stalling. Many had expected growth to come in even below the 1930s levels given the long hangover of the Great Recession and the drying up of immigration, which came to a virtual halt during last year's pandemic.

Frey warned that even a recovering economy may not change the trend with the population aging rapidly and immigration contentious. "Unlike the Great Depression, it's part of a process where we're likely to keep having slow growth," Frey said.

Since 2010, immigration has declined, driven by the economic crisis early in the decade and government restrictions later in the decade. The birthrate has also dropped; and life expectancy has dipped in the past couple of years -- a reversal driven by factors such as drug overdoses, obesity, suicide, and liver disease, and sharply accelerated last year by the coronavirus pandemic.

The extent to which the coronavirus pandemic has contributed to population patterns is not apparent in the new census data because much of the related displacement and the deaths of over half a million people took place after Census Day. According to the Pew Research Center, 5% of U.S. adults said they moved because of the pandemic; it is not clear whether these moves will be permanent.

But it is clear that older populations, especially those over age 65, will continue to see far higher rates of growth than young ones. The percentage of Americans 65 and over has grown by 35%, based on census estimates released last year. In the coming decade, people in the large baby boomer generation will reach their 60s, 70s and 80s.

Without robust immigration, the United States would look more like Japan, Germany and Italy, where births and the influx of newcomers have been unable to keep pace with the graying of the population, placing burdens on social services and the labor force. A Pew Research Center analysis showed that more half the country's population increase between 1965 and 2015 was due to immigration, which alone added about 72 million people. With no immigration in the next half-century, growth in the United States would nearly flatten.

Most of the fastest growth was in the South and the West, which have seen an influx in recent years of people moving in from other countries and other states. Utah grew by 18.4%, the most of any state. That reflects its relatively high birthrate now and in recent decades, which has resulted in a young population compared with other states, but it also reflects the fact that more people are moving to Utah from other states than moving out of Utah to other states, said Steven Martin, a senior demographer at the Urban Institute.

Based on census estimates, in more than a dozen states about half the gains are Hispanics, including Arizona, Florida, Nevada, New Mexico and Texas, Frey said. Whites accounted for more than half the growth in five states, plus the District of Columbia. In 27 states, the number of Whites declined.

Florida is also growing because it continues to be a retirement destination, Martin said. The average age there is between 42 and 43. Puerto Rico's population shrank by 11.8%.

While most states registered an uptick rather than a decline, the growth was in many cases much slower than in previous decades. California, for example, grew by 2.3 million people, or 6.1%, but it will lose a seat in Congress because other states outpaced it.

West Virginia shrank most radically, losing 3.2% of its population. That continued a decades-long downward trend and reflects emigration and aging of the population. The state, which is more than 90% white, is the only one to have a smaller population compared with 1950 levels, when it peaked at slightly over 2 million people.

The regional shifts also reflect a continuation of economic trends, such as a diminishing of industrial and manufacturing jobs in the Mid-Atlantic and the Rust Belt. And in some cases, the changes were driven by technology: "Air conditioning," said Kimball Brace, president of Election Data Services, a political consulting firm specializing in redistricting, election administration, and the analysis and presentation of census and political data. "Once air conditioning came into being, people moved south."

William Fulton, director of the Kinder Institute for Urban Research at Rice University in Houston, said North Carolina and Texas are positioned to become the intellectual powerhouses of the new economy, as the South has snatched away major manufacturing industries such as automobiles from the Rust Belt. "We are 10-20 years away from the South and the West being truly dominant in American culture and American society," Fulton said.

Other contributors to population change were similar among all states, with birthrates and life expectancy down across the board, Martin said.

"At a time when Americans appear to be profoundly different from each other politically and culturally, their demographic patterns are moving in much the same ways," he said. "The raw statistics of our lives seem to be telling us that in fundamental ways we are much more alike than we are different."

Information for this article was contributed by Mike Schneider and Nicholas Riccardi of The Associated Press; and by Michael Scherer, Tara Bahrampour, Harry Stevens, Adrian Blanco and Ted Mellnik of The Washington Post. 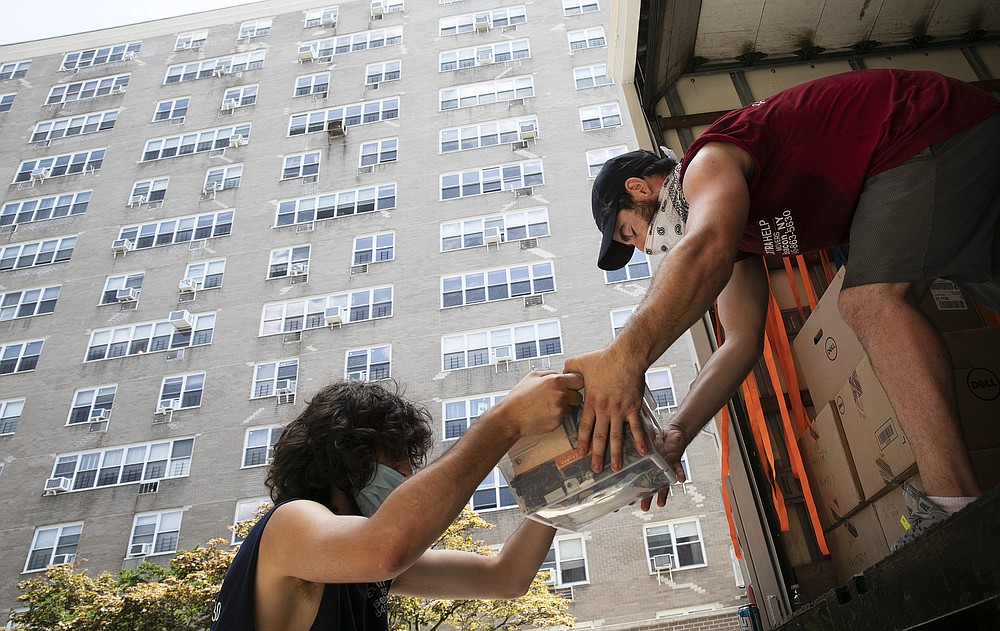 FILE - In this Tuesday, July 21, 2020, file photo, workers load boxes into a moving truck in The Bronx borough of New York for a family leaving their 14th floor apartment, amid the coronavirus pandemic. The first numbers from the 2020 census show southern and western states gaining congressional seats. The once-a-decade head count shows where the population grew during the past 10 years and where it shrank. (AP Photo/Mark Lennihan, File) 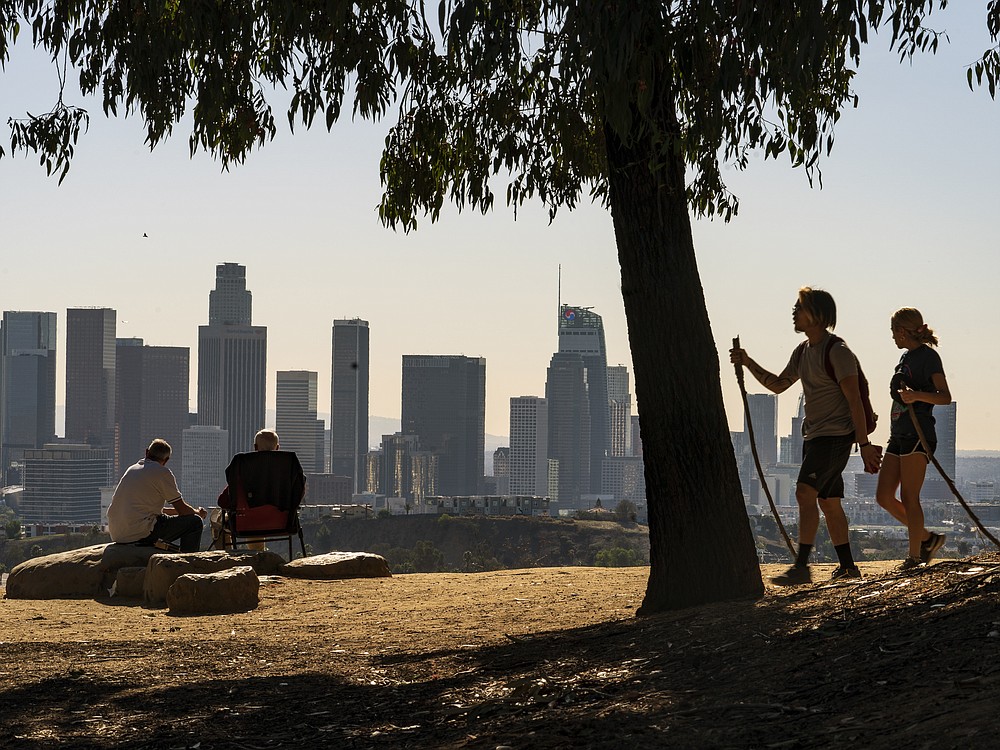 FILE - In this Monday, Jan. 11, 2021, file photo, people overlook the skyline of Los Angeles. California is losing a U.S. House seat for the first time, dropping its delegation from 53 to 52 members. That's according to Census Bureau population data released Monday, April 26, 2021, that determines how the nation's 435 House seats are allocated. (AP Photo/Damian Dovarganes, File) 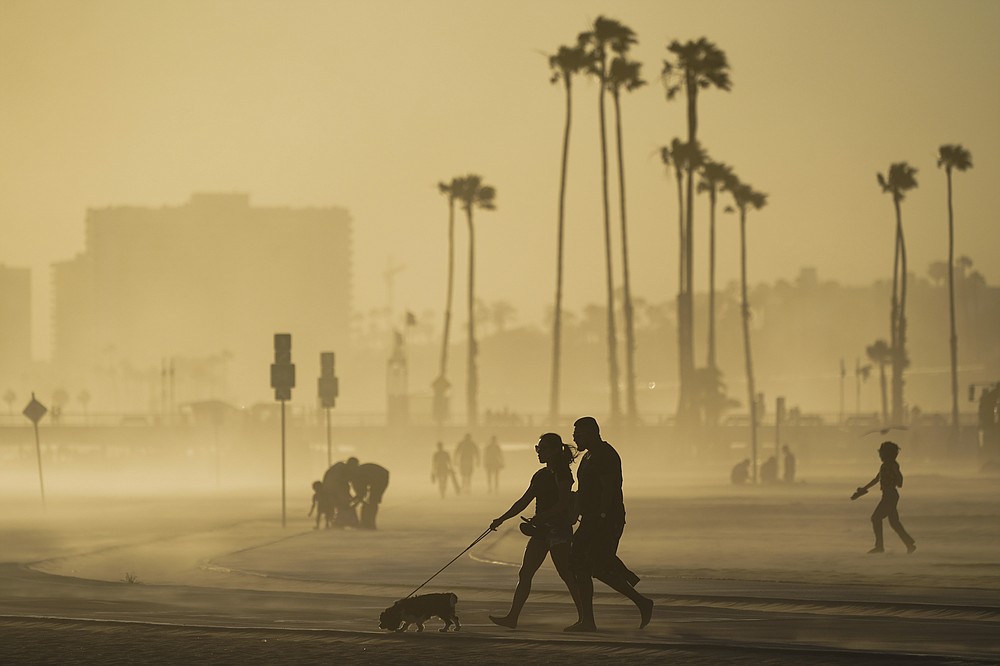 FILE - In this April 18, 2021, file photo, people walk on a beach path as evening winds kick up sand in Long Beach, Calif. The first numbers from the 2020 census show southern and western states gaining congressional seats. The once-a-decade head count shows where the population grew during the past 10 years and where it shrank. (AP Photo/Ashley Landis, File)
ADVERTISEMENT