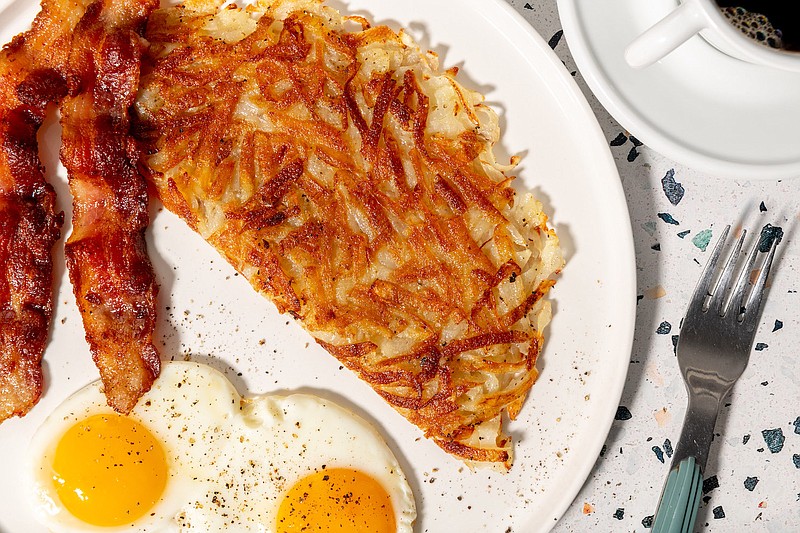 I love all forms of fried potatoes. If I could have french fries or tater tots for a meal every day without concern, I would. However, I tend to regulate these iterations of crispy spuds these days, thus filling me with joy and exuberance anytime I'm able to enjoy crunchy taters in the morning. Enter hash browns.

My childhood mornings regularly featured diced and pan-fried potatoes prepared by my mom, but I consider those "home fries" and not "hash browns." To me, the latter are shredded rather than diced and are a staple at diners and fast-food restaurants across the country, not necessarily something made at home from scratch. I've even made hash browns numerous times during my line cook days, but until I revisited them for this recipe, I forgot just how easy they are to make in your own kitchen.

The word "hash" comes from the French "hacher," which means to chop, so "hash brown potatoes" translates to "chopped and fried potatoes." Before being shortened to "hash browns," the dish was called "hashed and browned potatoes," the first known mention of which comes from "Miss Parloa's Kitchen Companion," published in 1887. The cookbook features a recipe for "cold boiled potatoes, cut into cubes" heated in a brown gravy and then pan-fried until browned and has a texture that can be "fold[ed] like an omelet," very different from the recipe many of us know and love today.

Shredding overtook dicing as the preparation of choice in the 1970s, according to "Breakfast: A History" by Heather Arndt Anderson, which was "likely inspired by Swiss rosti, the traditional farmer's breakfast from Switzerland's capital, Bern." But when it comes to shredded fried potatoes, there are numerous iterations around the world, with some of the most well known coming from Europe, including rosti, pommes darphin and potato latkes.

So what's the difference between them? Hash browns, rosti and pommes darphin are typically just seasoned potatoes, but potato latkes also often include onion, egg and extra starch. Some of the recipes traditionally called for pre- or par-cooked potatoes, but all can be cooked from raw spuds. And when it comes to size and shape, rosti and pommes darphin are much thicker, sometimes clocking in around an inch or so, and formed into perfectly round circles, whereas hash browns and latkes are thinner, often with free-form, frilly edges.

Not all potatoes are created equal, and the choice of potato in hash browns will affect the final product. The main two types of potatoes are mealy and waxy, which have high and low starch contents, respectively. "Though the Swiss use waxy potatoes [for rosti], those in the U.S. do not brown as well as Idaho baking potatoes," according to a recipe in the Chicago Tribune. It's the extra starch in mealy potatoes that helps them get nice and crispy, making russet potatoes (aka Idaho or baking potatoes) ideal for hash browns.

Grab a large skillet — nonstick is preferable to cast iron due to the latter's problems with uneven heating — that is big enough to spread the potatoes into a very thin layer. Heat a small amount of fat in the pan, add the potatoes, press them into a thin, even layer, and then cook until golden and crisp. Then flip, let them brown on the other side, and you're good to go.

Line a bowl with a clean dish towel or multiple layers of paper towels. Peel the potatoes and grate them directly into the towel-lined bowl. Gather up the towel and squeeze out as much of the moisture as you can from the potatoes; discard the liquid. Return the potatoes to the empty bowl, sprinkle with the salt and pepper and toss to combine.

In a 12-inch nonstick skillet over medium-high heat, melt the butter and heat the oil until shimmering. Add the potatoes, pressing into an even layer with a spatula, and cook until golden brown on the bottom, about 7 minutes. Flip and continue cooking until browned on the other side, about 5 minutes more. Remove, drain on a paper towel-lined plate or wire rack set over a baking sheet, and serve.