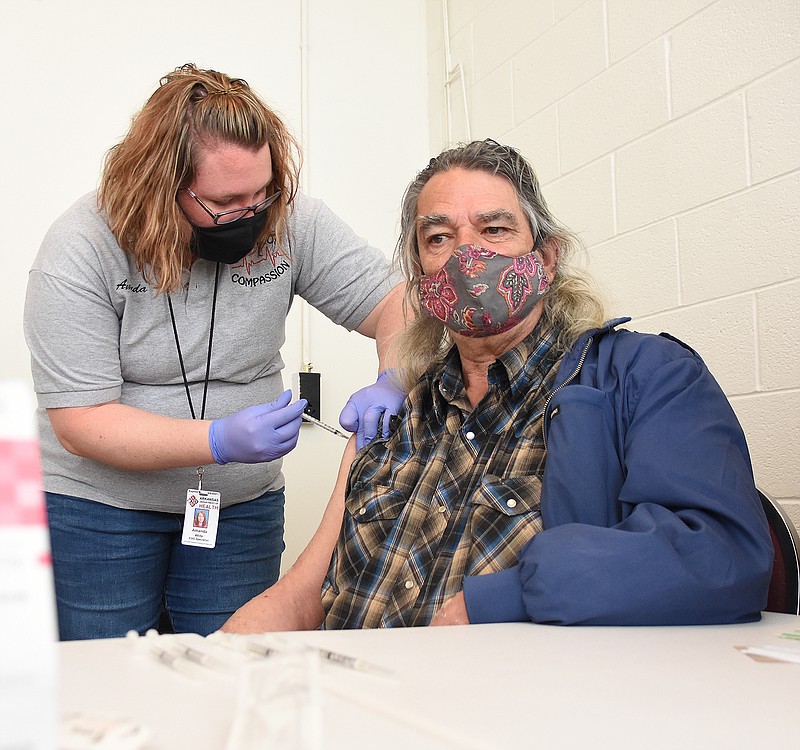 Despite the clearance of Johnson & Johnson's one-dose coronavirus vaccine for use again, the overall pace of immunizations in Arkansas continued to slow on Tuesday as Gov. Asa Hutchinson called on employers, primary care doctors, and schools to help with the effort.

The Republican governor said he wants to make it as easy as possible for people to get the shots.

"I'd like to see a vaccine clinic made available at [an Arkansas] Travelers baseball game," Hutchinson said.

"I'd like to see it at the malls that are available. I would like to see it more available at the schools and challenged [Education] Secretary [Johnny] Key to continue to encourage our schools to vaccinate [ages] 16-plus, and soon it will be even down from there age-wise."

Also on Tuesday, the state Department of Health reported that 26 cases in the state had been identified in the past week as having been caused by the coronavirus variant from the United Kingdom.

[Video not showing up above? Click here to watch » https://www.youtube.com/watch?v=unz1y_JktNk]

That more than doubled the total number of such cases that have been found in Arkansas, bringing it to 43.

"These are here, as we have said over and over again," Health Secretary Jose Romero said.

"They're becoming more prevalent in our ability to isolate them and find them, and this is only the tip of the iceberg because we're only sequencing a small -- very, very small -- minority of the number of people that are sick" to determine if a variant was responsible for their illness.

Meanwhile, the state's total count of virus cases rose by 229, the third daily increase in a row that was larger than the one a week earlier.

After rising for the previous two days, the number of people hospitalized in the state with covid-19 fell by 13, to 157.

The state's death toll from the virus, as tracked by the Department of Health, rose by five, to 5,725.

Hutchinson on Monday said the use of Johnson & Johnson's vaccine could resume in Arkansas after a nationwide "pause" that was implemented on April 13 after some people outside Arkansas who received the shot developed a rare blood-clotting disorder.

Possibly reflecting delays in reporting, the number of Johnson & Johnson doses that had been administered in Arkansas rose by just one, to 54,580, on Tuesday, according to data from the U.S. Centers for Disease Control and Prevention.

Romero, chairman of a CDC advisory committee that last week recommended lifting the pause, said Tuesday that the chance of developing the clotting disorder is small, and the benefit of getting the shot "far outweighs" the risk.

The bulk of the state's 70,000 Johnson & Johnson doses are at the Health Department's local health units, which have used them at clinics for the homeless and other groups.

Romero said all the department's clinics that offer the Johnson & Johnson vaccine will also offer an alternative, such as the Moderna vaccine, which has been delivered to every local health unit.

According to the Health Department, the total number of vaccine doses that have been administered in the state, including second doses of the Pfizer and Moderna vaccines, grew Tuesday by 15,170.

That was down by more than 4,400 doses from the daily increase a week earlier.

The average number of doses administered each day over a rolling seven-day period fell to just under 14,800, dropping below 15,000 for the first time since the week ending March 11.

At his weekly news conference on the pandemic, Hutchinson said employers should educate workers about the importance of getting vaccinated and give them time off to do it.

Employers can also help by having a vaccine clinic at the workplace or giving employees the opportunity to go to a pharmacy to get the shots, he said.

He said physicians in outpatient clinics have "a growing supply of vaccines" and are "a trusted provider."

"That's who a patient is used to going to, and they will be there to guide whoever their patient is to the right place to get the vaccine," Hutchinson said.

Since each vial of vaccine contains several doses, Hutchinson said the state is working on a way to provide more physicians' offices with the vaccine without giving them more than they can use before it expires.

Col. Robert Ator, who is coordinating the state's vaccination effort, said each of the three vaccines is now available in every county.

About 80,000 of the Pfizer and Moderna doses were designated to provide the second-shots of those vaccines' two-dose regimens, Ator said.

"The supply is not a problem," Hutchinson said. "We have vaccines available."

Randy Zook, president of the Arkansas State Chamber of Commerce, said after the news conference that many of the state's employers have had on-site vaccination clinics, and most "have really taken special efforts" to encourage people to get the shots.

The best way to do that varies from one business to the next, he said.

"Some people, an hour off to go get a shot is fine," Zook said.

"Others want to have the next day off because they're afraid they're going to have some kind of reaction. Others respond to cash. Some people respond to pizza parties."

The chamber is among a coalition of groups that last month started the Vaccinate the Natural State Campaign, which is aimed at enlisting businesses to encourage employees to get vaccinated.

Max Greenwood, a spokeswoman for Arkansas Blue Cross and Blue Shield, another of the organizations involved, said Tuesday the leaders of 68 companies so far have signed the campaign's pledge to lead by example, strongly encourage all eligible employees to get the shots, provide educational resources and make getting the shots as easy as possible.

According to the CDC, the number of Arkansans who have received at least one vaccine dose rose Tuesday by 1,378, to 1,055,239, representing about 35% of the state's population.

Nationally, 42.7% of people had received at least one vaccine dose and 29.1% had been fully vaccinated.

Hutchinson said he'd like for at least 70% of the Arkansas' population to be vaccinated, which he said is the level experts say is needed to achieve herd immunity.

It will likely be the fall before that happens, he said.

"We don't have a specific timeline other than as soon as possible," Hutchinson said. "We want to urge everybody to get the vaccination, and since it's available, there's not any real reason we can't get to a 70% level within a matter of three months, but that is all dependent upon the willingness of citizens of Arkansas to get the vaccination."

The increase in the state's case count on Tuesday was larger by 31 than the one a week earlier.

As a result, the average number of cases added to the state's tallies over a rolling seven-day period rose to 184, its highest level in almost a week.

In addition to the new cases caused by the United Kingdom variant, the Health Department reported that a total of 20 cases had been identified as having been caused by two different variants from California.

That was up from 17 cases that had been identified as having been caused by the California variants as of a week earlier.

Just one case in the state, reported earlier this month, has been identified as having been caused by the variant from Brazil.

The number of counties where at least one variant of concern had been identified grew from 17 as of last week to 25.

The Health Department continued to list Benton, Miller and Washington counties as each having five to 20 such cases. The others had fewer than five.

The presence of the variants adds urgency to the state's vaccination efforts, Romero said.

"The more people that are unimmunized, the more there is a chance for this virus to spread and to continue to mutate, so we could see newer variants if we have [a] large enough population of individuals not vaccinated," he said.

He said the variant from the United Kingdom is of particular concern because it's thought to be more lethal as well as more transmissible than the original coronavirus strain.

"We also know that, in states where this is already a problem, we're seeing more children being hospitalized, and with [more severe] disease than we had in the past," Romero said.

After rising the previous two days, the number of coronavirus patients in Arkansas who were on ventilators fell Tuesday by one, to 26.

The number of virus patients who were in intensive care as of 2 p.m. rose by four, to 71.

The cases that were added to the state's tallies included 135 that were confirmed through polymerase chain reaction, or PCR, tests.

The other 94 were "probable" cases, which include those identified through less-sensitive antigen tests.

The number of cases that were considered active rose by 39, to 1,844, as new paces outpaced recoveries.

Neither the Health Department nor the Department of Corrections reported any new cases among prison or jail inmates.

Among nursing home and assisted-living facility residents, the state's count of virus deaths rose by two, to 2,074.

The number of the state's virus patients who have ever been on a ventilator rose by four, to 1,617.