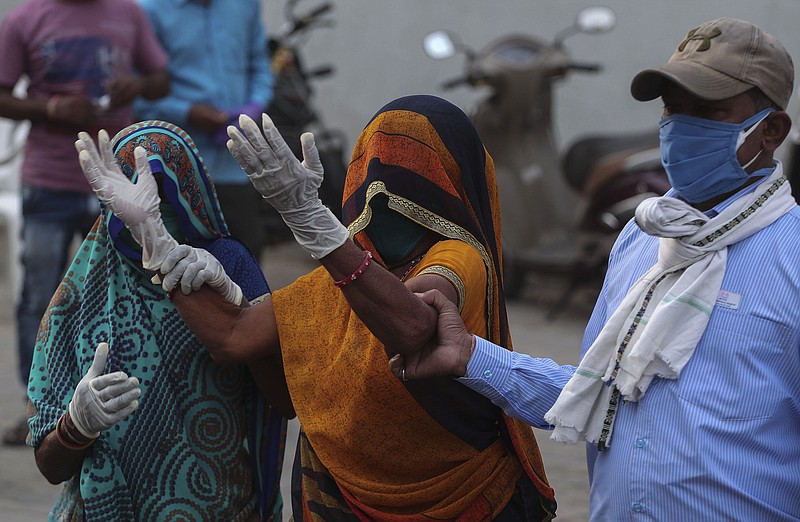 A relative of a patient who died of COVID-19, mourns outside a government COVID-19 hospital in Ahmedabad, India, Tuesday, April 27, 2021. Coronavirus cases in India are surging faster than anywhere else in the world. (AP Photo/Ajit Solanki)

India reported more than 300,000 new confirmed coronavirus cases for the sixth day in a row Tuesday as the country battled a wave of illnesses that's overwhelmed its health-care system.

Tedros Adhanom Ghebreyesus, the head of the World Health Organization, called the situation in India "beyond heartbreaking." He warned that many countries "are still experiencing intense transmission," with more new cases globally in the past week than in the first five months of the pandemic.

India's spike in new cases has helped push global infection rates to record levels. The country announced 323,144 new infections over the previous 24 hours, a 10% drop from the day before, but experts warned that this may be more a function of a drop in testing than a sign that the new wave is abating.

[Video not showing up above? Click here to watch » https://www.youtube.com/watch?v=K3Rg-pC3nKQ]

An additional 2,771 people have died, a number also considered an undercount amid reports that many probable covid-19 deaths are being officially attributed to underlying causes or going unrecorded.

Medical facilities in India, especially in the larger cities, have been under strain from the flood of patients as the number of cases skyrocketed in the past few weeks under the pressure of new, more virulent variants and relaxed restrictions. Hospitals in some cities have stopped admitting patients amid a desperate scramble for supplemental oxygen, ventilators and medicine. In some hospitals, patients have died after supplemental oxygen ran out.

That's led to growing anger at Indian Prime Minister Narendra Modi, whose government permitted crowded election rallies and religious festivals, and boasted of having neared the end of the pandemic weeks before the latest surge began. Many are also frustrated at delays in the inoculation program in a country that's the world's largest producer of vaccines.

The Indian government has attempted to stifle criticism during the new outbreak, including petitioning Twitter to remove tweets critical of the government's handling of the crisis.

On Tuesday, Britain's first shipment of aid arrived in the country, including 100 ventilators and 95 oxygen concentrators, with more on the way. France, among other countries, also announced plans to send medical equipment.

Tedros said 2,600 WHO staffers have been sent to help in India. He added that the WHO has sent "critical equipment and supplies, including thousands of oxygen concentrators, prefabricated mobile field hospitals and laboratory supplies."

India's armed forces announced Monday that they would be pitching in, as well, releasing supplemental oxygen from reserves and calling back retired medical personnel to help in hospitals struggling under the load of new patients.

Separately, some Africans are hesitating to get covid-19 vaccines amid concerns about their safety, alarming public health officials as some countries start to destroy thousands of doses that expired before use.

Malawi and South Sudan in recent days have said they will destroy some of their doses, a concerning development on a continent where health officials have been outspoken about the need for vaccine equity as the world's rich nations hold the bulk of shots.

Africa, whose 1.3 billion people represent 16% of the world's population, has received less than 2% of the covid-19 vaccine doses administered around the world, according to WHO.

Achieving that goal will require about 1.5 billion vaccine doses for Africa if the two-shot AstraZeneca vaccine continues to be widely used. But safety concerns relating to that vaccine, often the main shot available under the donor-backed COVAX program to ensure access for developing countries, have left some Africans worried.

Vaccine-related suspicions have been spread widely on social media, driven partly by a general lack of trust in authorities. Uganda's health minister had to refute allegations that she faked receiving a shot, even posting a video of herself getting the jab on Twitter, along with the admonition: "Please stop spreading fake news!"

The WHO and the Africa Centers for Disease Control and Prevention have urged African governments to continue rolling out the AstraZeneca vaccine, saying its benefits outweigh any risks after European countries limited its use over concerns about rare blood clots in a small number of recipients.

The Africa CDC said in a statement last week that it had received guidance from the Serum Institute of India recommending a three-month "shelf life extension" on the April 13 expiration date of at least a million AstraZeneca shots delivered to Africa.

Africa nations "don't have a choice," Africa CDC director John Nkengasong said, urging Malawi to use all of its shots after authorities in the southern African nation said they would burn 16,000 AstraZeneca doses that expired earlier in April.

It is unclear if Malawi will follow that advice.

The five-person board of the Brazilian Health Regulatory Agency unanimously decided late Monday that consistent and trustworthy data required was lacking for approval of the requests from 10 states, according to a statement. Another four states and two cities have also sought authorization to import the vaccine.

The agency, known as Anvisa, said there were faults in all clinical studies of the vaccine's development, as well as absent or insufficient data.

Anvisa's decision doesn't affect a separate request from Brazilian company Uniao Quimica for emergency use authorization of Sputnik V produced locally, according to an emailed statement from Anvisa's press office.

Still, it came as a blow to Russia's efforts to promote worldwide adoption of the vaccine, whose exports have helped it regain diplomatic footholds in countries where relationships had languished.

"We need additional information on what this lack [of data] means, because there's already more than enough data," the Kremlin's spokesperson Dmitry Peskov told reporters in a daily briefing.

"The contacts [with Brazil] will continue. If some data is lacking, it will be provided," he said.

Information for this article was contributed by Miriam Berger, Jennifer Hassan and Paul Schemm of The Washington Post; and by Rodney Muhumuza, Gregory Gondwe, Jonathan Paye-Layleh, Cara Anna and David Biller of The Associated Press.