Not over yet: Mallett restarts career in spring league 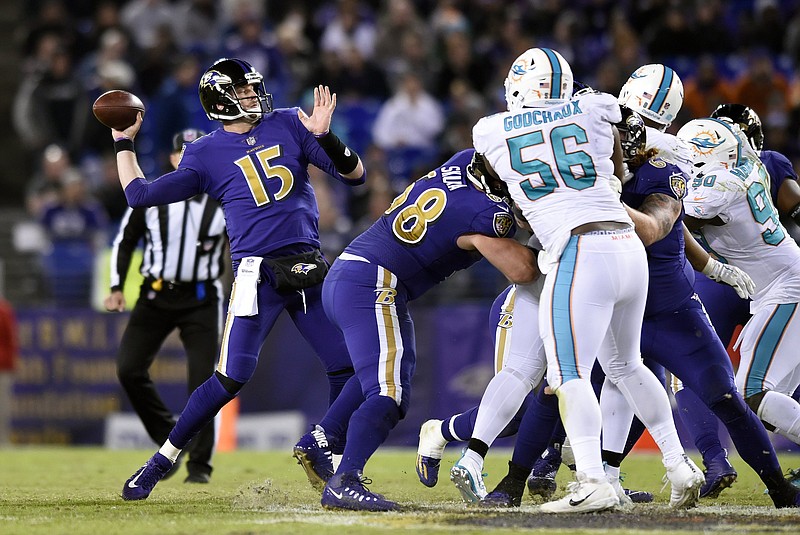 Baltimore Ravens quarterback Ryan Mallett (15) throws to a receiver in the second half of an NFL football game against the Miami Dolphins, Thursday, Oct. 26, 2017, in Baltimore. (AP Photo/Gail Burton)

But the former University of Arkansas quarterback and third-round NFL Draft pick by the New England Patriots hasn't hung up his helmet and cleats yet.

Mallett, 32, has signed on with The Spring League, a developmental league with many players who have earned NFL paychecks and aspire to return there. He is scheduled to report today in Houston.

The eight-team league, with pods in Indianapolis and Houston, will open play May 6.

The 6-7 Mallett plays for the Generals, who open their six-game season May 8 against the Jousters at Rice Stadium. The Generals are coached by Bart Andrus, the former Tennessee Titans quarterbacks coach. The Spring League games air on FS1 and Fox.

"Oh, I'm 11 out of 10 excited about it," Mallett said. "There's a few times I've thought about getting in those other leagues, and there's a few things where it just didn't feel right and I didn't do it.

"This all happened pretty quick, but I'm excited. I've got some personal things to prove, not to anybody but myself. I'm just ready to get back out there and compete."

Mallett has been teaching and coaching at Mountain Home High School this school year, but he talked to administrators there about having his duties covered for the rest of the term as he resumes his career. His last day of the school year was Friday.

"They've all been very supportive," Mallett said. "It's like we tell our kids here, 'If you want something, go earn it.' So it's kind of what I'm trying to do myself."

Mallett piloted Arkansas football during a portion of its most recent heyday. After transferring from Michigan, the Texarkana, Texas, product led the 2009 Razorbacks under coach Bobby Petrino to an 8-5 record and a Liberty Bowl win over East Carolina.

The next season, Arkansas qualified for the only Bowl Championship Series berth in its history, a Sugar Bowl game against Ohio State that was later vacated by the Buckeyes after their 31-26 win in New Orleans. The Sugar Bowl berth was earned after a wild 31-23 win over LSU in Little Rock on Thanksgiving weekend.

Mallett was 18-8 as the starting quarterback at Arkansas. He ranks second in career passing yardage with 7,493 yards behind Tyler Wilson (7,765) despite playing just two seasons, and second in career touchdown passes with 62 behind Brandon Allen (64). He had four 400-yard passing games.

He had a 3-5 record in eight games as an NFL starter with the Houston Texans and Ravens. He threw only four passes in three seasons as Tom Brady's backup with New England. Over the next three seasons he saw action in 15 games and completed 180 of 325 passes for 1,767 yards and 7 touchdowns. His career numbers are 190 of 345 (55.1%) for 1,835 yards with 9 touchdowns and 10 interceptions.

Now he's joining a league that has a national TV contract but a thin track record. Former Texas A&M quarterback Johnny Manziel has played in the league, which has sent 104 players on to the NFL since 2017, according to the league's website.

There is no compensation outside of lodging and meals in The Spring League, just the chance for Mallett to get back to the game he loves and to let NFL scouts see him again.

"All I want to do is just go play football," Mallett said. "I think I'm probably in the best shape I've been in in a long time. I've been getting in shape on my own. We have quarterback workouts three times a week before school, and I get in there and show them the drills and do them with them.

"We've had receivers with them the last few weeks, so I've been throwing. During the season last year, I would throw against our defense for 7 on 7, sometimes team and things like that. There might be a little rust to knock off that will take a practice or two, but other than that I think I'll be all right."

Mallett's biggest concern is his age. The median age of players in the league is 24.

"I think I might probably be the oldest one out there," he said. "Got a bunch of young bucks that are probably going to be out there, so I've got to be ready to go."

Mallett said throwing to the high school players has helped him work on his touch. Always known for having a huge arm, one of the knocks on Mallett coming out of college was his lack of touch on short throws.

After the six-game season, the league will conclude with its championship game June 19 at a site to be determined.

Mallett isn't sure where his personal journey will take him after that.