Lions roared back for 2012 title 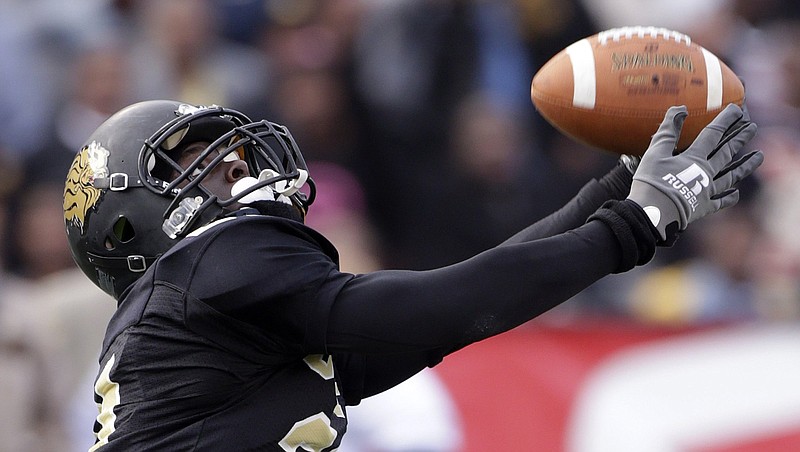 UAPB receiver Willie Young hauls in a 95-yard touchdown reception late in the fourth quarter against Jackson State in the SWAC championship at Legion Field in Birmingham, Ala., on Dec. 8, 2012. UAPB won 24-21 in overtime. (AP/Dave Martin)

Editor’s note: This is the second of a two-part series looking back at the 2012 University of Arkansas at Pine Bluff Golden Lions, the only football team in school history to win an outright conference championship and post 10 wins in a season. On Saturday, UAPB, which is 4-0 in a spring schedule resulting from the covid-19 pandemic, will take on Alabama A&M University for the SWAC title in Jackson, Miss.

Under an overcast sky at Legion Field in Birmingham, Ala., on Dec. 8, 2012, UAPB trailed Jackson State 14-0, with the Tigers capitalizing on two interceptions off quarterback Ben Anderson.

“We knew going into it, it’s still hard to beat a team twice,” said Bill Ross, a linebacker and the Golden Lions’ leading tackler that season. “They still had a lot of playmakers.” Anderson put the Lions on the board with a 1-yard quarterback keeper to start the second quarter. After Jackson State’s Clayton Moore finished off a 16-play drive with a keeper of his own, UAPB regained a little momentum thanks to Ross’ 73-yard fumble return just before halftime to pull within 21-14. Fellow linebacker Xavier Lofton forced the fumble.

The Lions gained more confidence from the game-changing play.

“OK, it’s a one-possession ballgame,” Ross remembers thinking. “I feel that really changed momentum. I feel I played better in the second half. Definitely our whole team did.” To start the fourth quarter, left tackle Terron Armstead had his number called. The soon-to-be third-round draft pick of the New Orleans Saints rushed 8 yards to the Jackson State 41, setting up a 2-yard carry by El Dorado product Justin Billings for a first down.

That drive, however, was stalled when Joseph LeBeau held Anderson to 2 yards on a fourthand-6 carry from the Tigers’ 35.

Neither team established a significant drive for much of the fourth quarter. Moore broke a 40-yard run to the UAPB 33 for a first down, but defensive end Brandon Thurmond and Lofton contained Jackson State’s Rakeem Sims on back-to-back carries and Dedric McDonald threw incomplete to wideout Rico Richardson, the SWAC’s Offensive Player of the Year who bounced around mostly as an offseason and practice squad player in the NFL.

Tony Dean then punted 38 yards to the UAPB 4, leaving the Lions with 2 minutes, 52 seconds to stay alive.

LIONS FOR THE WIN

Anderson started the next series with a 1-yard carry. The following play, he persuaded then-offensive coordinator Eric Dooley to reach down into his playbook.

“We had been practicing one set of plays for two weeks,” Anderson said. “We got to the game day and we ran our old playbook. We were running all our plays, but we hadn’t run this play. All of Willie Young’s touchdowns came out of this play, a Z-post.” In a Z-post route, the Z receiver, or wideout who lines up on the right-hand side of the quarterback, runs straight ahead 10 to 20 yards before making a slight turn toward the goalpost.

“I told coach, if the safety steps up, I’m going to let it go,” Anderson said. “I let it go, and I got tackled. I heard the crowd cheering.” As soon as Anderson got up, Young had only 15 yards before he crossed the goal line, Anderson recalled. The true freshman from Chalmette, La., ran into the end zone with exactly 2 minutes remaining.

Tyler Strickland, who hit a game-winning field goal in the season opener, tacked on the extra point, and the game was tied, 21-21. Young had just scored his third touchdown of the season.

“That was the first time I experienced tears of joy,” Anderson said.

Defensive tackle Sean Robison, a Fort Smith Southside High School graduate, strung together three big plays on the opening drive of overtime. He sacked Moore on second-and-9, batted down a pass on third down and blocked a 43-yard field goal attempt by Ryan Deising to give the Lions a chance to win it all.

“Sean was a monster that game,” Ross said.

Billings, who led a running back-by-committee group, gained 20 yards down to the Tigers’ 5. He got the call on the next three plays, gaining 1, then 2, and losing 7, forcing Strickland to come on for the win from 26 yards out.

Strickland did the job. UAPB beat Jackson State 24-21 before 32,480 fans for its first outright SWAC title and 10-win season.

Anderson completed 13 of 25 passes for 225 yards, but he was sacked six times. Young caught three passes for 136 yards for game MVP honors.

“Looking back on that game, when me and some of my guys get together, we always come back to that game,” said Ross, now a driver supervisor for UPS who was a college assistant coach for five seasons, including stops at both New Mexico Military Institute and UAPB. “My dad will call me and say, ‘Hey, I just watched the 2012 championship game.’ … That was the most insane game I had ever been a part of, and I played football for 16 years.”

UAPB finished No. 1 in the final American Sports Wire and BOXTOROW coaches’ Historically Black Colleges and Universities polls, and it ended up No. 2 in the final Sheridan Broadcasting Network poll, which at the time was the most widely regarded poll in determining the Black college national champion.

Winston-Salem State of North Carolina, led by current Alabama A&M Coach Connell Maynor, was No. 1 in the Sheridan poll and reached the NCAA Division II championship game that year, losing to Valdosta State of Georgia.

Armstead made first-team All-SWAC in each of his last three seasons and won eight individual SWAC indoor and outdoor field event championships. He’s made the Pro Bowl each of the past three years with New Orleans.

Thurmond picked up Defensive Player of the Year honors from the Sheridan Broadcasting Network, SWAC, American Football Coaches Association and BOXTOROW. He signed with the Atlanta Falcons as a free agent and also spent three years in the Canadian Football League, according to its players association’s website.

Thurmond and Ross were selected for the Sheridan All-America team.

Much like in 2012, UAPB this year needed to hold off a powerful Prairie View offense in its win 36-31 on April 17. Dooley is now Prairie View’s head coach and has two assistants from the 2012 title team, offensive line coach Damon Nivens and defensive coordinator Henry Miller.

Anderson attended that game, seeing another quarterback wearing No. 11, Skyler Perry, throw for four touchdowns and rush for another. Perry, a junior, received BOXTOROW National Player of the Week honors for that performance.

“I’m happy for him,” Anderson said. “I’m a true UAPB fan at heart. My brother played ball at UAPB. I watched the games as a kid. Anytime someone from UAPB has success, I’m happy for him. He’s wearing my jersey, but he’s being a leader and he’s winning, so I don’t have a problem with it. It’s cool that people still remember that I wore the jersey, that people remember that more than anything.” The 2021 Lions (4-0), coached by Doc Gamble, have had to outrace high-octane offenses and are in position to post the program’s first unbeaten season in at least 76 years. (Online records for UAPB football date back to 1945.) This year’s team, like Monte Coleman’s pride of Lions in 2012, also came off a 6-5 record in the previous season. Counting the 2019 finale, UAPB is riding a five-game winning streak.

And now, just like 8½ years ago, UAPB is going to an old Southeastern Conference stadium — Mississippi Veterans Memorial Stadium this time — in search of a Southwestern Athletic Conference championship.

UAPB has to do it against Alabama A&M, a team that gave Anderson fits during his career (only for Anderson to beat the Bulldogs in his college finale in 2014) and defeated the late Mo Forte’s Lions in the 2006 SWAC final.

“They’ve got to stay laser-focused,” Ross said. “Have a great week of preparation. Run the ball well and tackle well. I think they have a really good shot of bringing home the championship. I wish them the best of luck.” 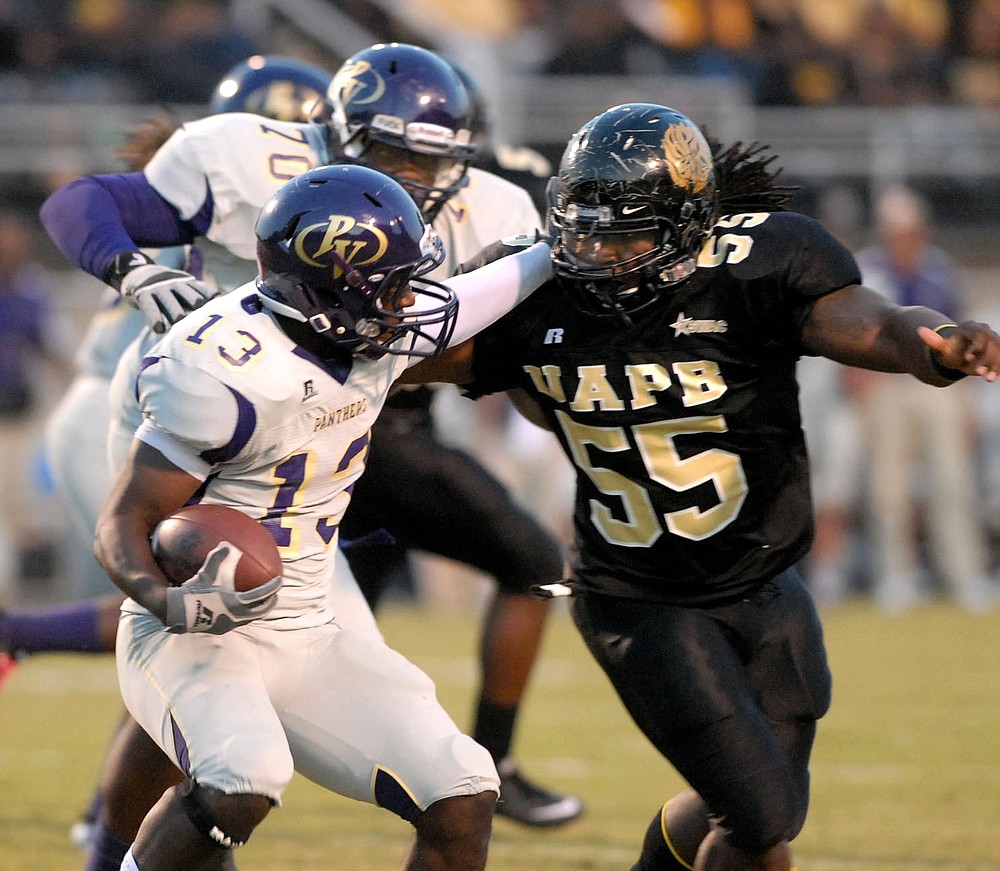