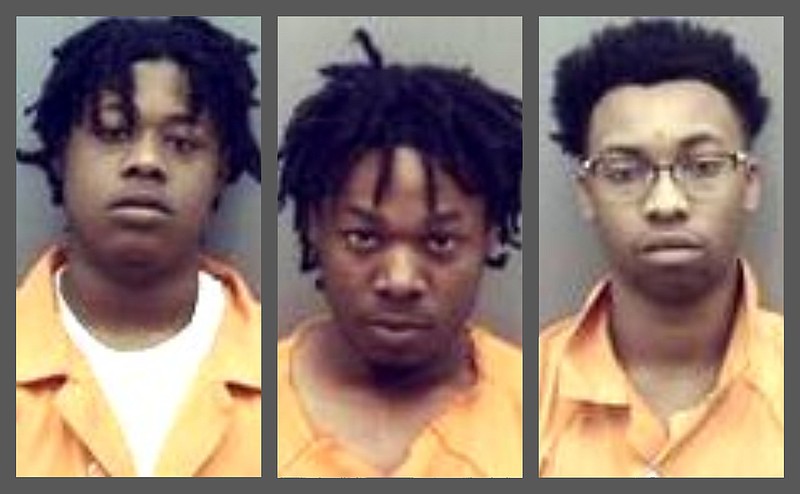 Three men are jailed in Jefferson County after a shooting Monday in Altheimer.

Jefferson County Circuit Judge John Kearney found probable cause to hold Jamarea Wainwright, 23, Kamarea Wainwright, 19, and Christopher Hammond, 21, all of Pine Bluff, on aggravated-assault charges. All three are suspected of discharging a firearm from a vehicle toward a father and son at the father's residence.

The father and son were not injured.

Kearney set $200,000 cash bail for Jamarea Wainwright, who pleaded no contest to first-degree battery and robbery in an April 2016 incident and spent 42 months in jail. He was given 10 years' probation in January 2020.

A $200,000 secured bail was set for Kamarea Wainwright and Hammond, neither of whom has any convictions. All three are ordered to have no contact with the victims.

The suspects stood before Kearney on Zoom at the same time.

Deputy Prosecuting Attorney Caleb Conrad read an affidavit by the Jefferson County sheriff's Lt. Kaylon McDaniel, which detailed that a witness told a deputy that shots were fired in the area of West Third Street and South Olive, near Altheimer City Hall.

Three unoccupied vehicles were struck by bullets, as was the residence of the father and son on South Olive. About 40 shell casings were found, authorities said.

Residents told the deputy that a tan SUV, either a Chevrolet Tahoe or GMC Yukon with paper license plate tags, was traveling in the area at the time of the shooting. The deputy said in the affidavit that several people were inside the vehicle and it was going past him in an opposite direction.

A resident at the South Olive home told the deputy that the SUV pulled up while he was mowing his lawn and the occupants asked if he knew whether his son had "a drum," according to the affidavit. The occupants left and returned about 20 minutes later in the same vehicle and the people inside began firing at the father and son in the front yard, the affidavit said.

The son left before deputies could obtain a statement from him.

A sergeant said he saw the SUV traveling south on U.S. 63 North and began to follow it into the Motel 6 on Market Street in Pine Bluff. The driver, whom authorities say was Kamarea Wainwright, was detained.

Hammond was suspected to be the front-seat passenger and Jamarea Wainwright the rear passenger. They were detained and other units arrived.

Kamarea Wainwright told a deputy that he had not been to Altheimer and didn't know anyone there. He said the weapons belong to his mother and the truck belongs to her as well, authorities said.

Hammond reportedly told deputies he had been "picked up from Little Rock" a few days earlier and was spending the night at the Wainwright residence. Hammond said he was unsure what was going on because he was sleeping inside the truck, and that he went to Saracen Casino but didn't go inside.

Hammond denied knowing where Altheimer is or being there on the date of the incident. According to the affidavit, he denied shooting a gun but said one of the guns belongs to him, a Glock 17 with an extended magazine.

Kamarea Wainright and Hammond, however, denied knowing anything about the shell casings in the vehicle, according to the affidavit. Jamarea Wainwright declined to give a statement.

Hammond told Kearney that he has retained Efrem Neely as his attorney. Jamarea and Kamarea Wainwright indicated they would retain their own attorney.

The suspects are due back in court June 8.