It finds lower risk of hospitalization by Compiled Democrat-Gazette Staff From Wire Reports | April 29, 2021 at 6:50 a.m. 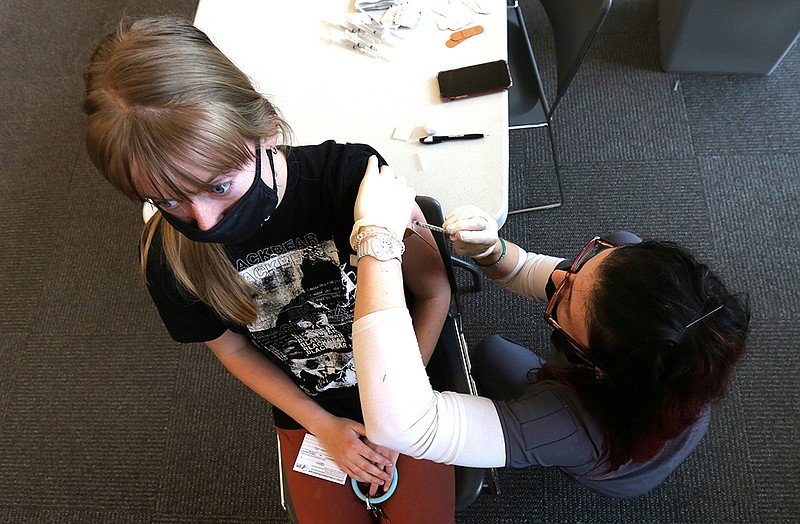 University of Arkansas at Little Rock junior Sydney Miller of West Plains, Mo., gets her first dose of the Pfizer vaccine Wednesday from Jami De La Cruz, a senior nursing student at UALR, during a clinic by Don’s Pharmacy at the Jack Stephens Center. New studies not only show the Pfizer and Moderna vaccines’ virus-fighting effectiveness, especially for older adults, but also their ability to reduce transmission. (Arkansas Democrat-Gazette/Thomas Metthe)

The Pfizer-BioNTech and Moderna vaccines being deployed to fight the coronavirus pandemic are highly effective in preventing hospitalizations among older adults, the group most at risk for severe disease and death, according to a federal study released Wednesday.

The Centers for Disease Control and Prevention results provide the first real-world evidence in the United States that both vaccines prevent severe covid-19 illness, as they did in clinical trials.

The risk for severe illness increases with age, and because older adults are at the highest risk, the CDC prioritized them for vaccination. About 68% of adults 65 and older in the United States -- more than 37 million people -- have been fully inoculated, the data shows.

Early reports from Israel documented the real-world effectiveness of vaccination, including among older adults, but those reports looked only at those inoculated with the Pfizer-BioNTech vaccine. In the CDC analysis, both Pfizer-BioNTech and Moderna were represented.

The analysis is one of many by the CDC and other groups to assess the effectiveness of the coronavirus vaccines in real-life conditions. In the United Kingdom, another study released Wednesday found that a single dose of the Pfizer-BioNTech or Oxford-AstraZeneca vaccines may reduce transmission of the coronavirus within households by almost 50%. Researchers from Public Health England said that protection was seen around two weeks after vaccination -- regardless of a person's age or contacts.

British Health Secretary Matt Hancock called the findings "terrific news," adding that the results further reinforced the need for people to get vaccinated to end the pandemic.

The Public Health England study found that those infected with the coronavirus three weeks after receiving one dose of vaccine were between 38% and 49% less likely to pass on the infection to close contacts, compared with those who were unvaccinated. The study was based on 57,000 people from 24,000 households who were considered contacts of a vaccinated person.

[Video not showing up above? Click here to watch » https://www.youtube.com/watch?v=0pLtyB1T8Zo]

"The results are promising for our communities and hospitals," Walensky said in a statement. "As our vaccination efforts continue to expand, covid-19 patients will not overwhelm health care systems -- leaving hospital staff, beds, and services available for people who need them for other medical conditions."

Until now, there had not really been "system-level evidence for both mRNA vaccines at the community level," said Jeanne Marrazzo, director of infectious diseases at the University of Alabama at Birmingham.

Death rates for hospitalized older adults can be six to eight times that of people younger than 65, Marrazzo said in an email. More than half the individuals in the analysis were over 75.

Unlike during the clinical trials, the CDC analysis of data took place as more-transmissible and potentially more-deadly variants of the virus were circulating, primarily B.1.1.7, which was first identified in the United Kingdom and is now the dominant strain in the United States.

The CDC study looked at hospitalizations among 417 participants during the first three months of this year at 24 hospitals in 14 states. Researchers compared prior covid-19 vaccination in a group of 187 patients who tested positive for the coronavirus with a very similar control group of 230 patients who tested negative. To determine the real-world effectiveness of the vaccines in preventing hospitalization, they compared the odds of prior vaccination between these groups.

Among the 187 patients who tested positive, for example, only one person had been fully vaccinated. But in the other group, 18 had been fully vaccinated. Even though the numbers are relatively small, the difference was still significant because it shows that patients with covid-19 were much less likely to have completed full vaccination with the Pfizer-BioNTech or Moderna vaccines, the data shows.

As expected, the analysis confirmed that vaccination provided no protection to people who had received their first dose less than two weeks earlier. It takes two weeks for the body to form an immune response after vaccination.

Separately, governors in Oregon and Washington are about to impose new restrictions as infections and hospitalizations in the the Pacific Northwest rise to alarming levels.

"If we don't act now, doctors, nurses, hospitals and other health care providers in Oregon will be stretched to their limits treating severe cases of covid-19," Brown said.

Washington Gov. Jay Inslee is expected to order new restrictions next week for several counties that would force businesses and churches to reduce their indoor gathering capacity from 50% to 25%.

Inslee will decide which counties need to be rolled back to Phase 2 of his reopening plan after an evaluation of benchmark numbers for public health safety. The public health director for King County, which includes Seattle, expects it will be included in Inslee's order.

"We might as well just get prepared for that and not just wait," Patty Hayes, director of public health in Seattle and King County, told the County Council on Tuesday.

The moves come as the supply of vaccines in many places is exceeding demand.

"There are appointments available right now all across the state," Brown said.

The public health director for northern Oregon's Umatilla County, which was downgraded Tuesday from the moderate to the high-risk category, told state officials it can send last week's vaccine allocation somewhere else and will likely do so again this week.

"Our demand level is dropping dramatically," Public Health Director Joe Fiumara told the East Oregonian newspaper. The county has about 6,000 doses and last week administered fewer than 500 as health department staffers sat idly, waiting for people to arrive for vaccinations.

The level of vaccinations in the mostly rural county is far short of health experts' targets. According to Oregon Health Authority data, only about 19,000 people have been fully or partially vaccinated in the county where 78,000 people live.

The restaurant sector objected to Brown's action, with the Oregon Restaurant & Lodging Association declaring that the state lost more than 1,000 food service businesses in 2020 and that 200 more have closed permanently so far this year.

"The move by the governor's office is tone deaf and offensive to tens of thousands of Oregonians working in restaurants and bars across our state attempting to pay their bills," said Jason Brandt, the group's president and CEO.

"It's great that we have more money in the hopper for our clobbered hospitality industry," Brandt said.

But he added: "The amounts that have been earmarked ... has never been close to enough to make these small businesses whole."

In the Oregon Senate on Wednesday, Republicans accused Brown of "reimposing draconian, undemocratic lockdowns that threaten the livelihoods of tens of thousands of Oregonians."

To protest Brown's order, the Republican senators insisted that bills be read in full, slowing the legislative process.

Brown, aiming to soften the blow to businesses, is also increasing the outdoor capacity limits for bars, restaurants and other sectors from 50 to 100 people in extreme-risk counties as long as they have physical distancing and other safety measures in place.

Washington is also taking a step back. In March, Inslee allowed restaurants and other indoor establishments throughout the state to operate at half capacity, up from 25%

But as in Oregon and other states, coronavirus case numbers and hospitalizations have been steadily rising in recent weeks.

Information for this article was contributed by Lena H. Sun and Jennifer Hassan of The Washington Post and by Andrew Selsky of The Associated Press.