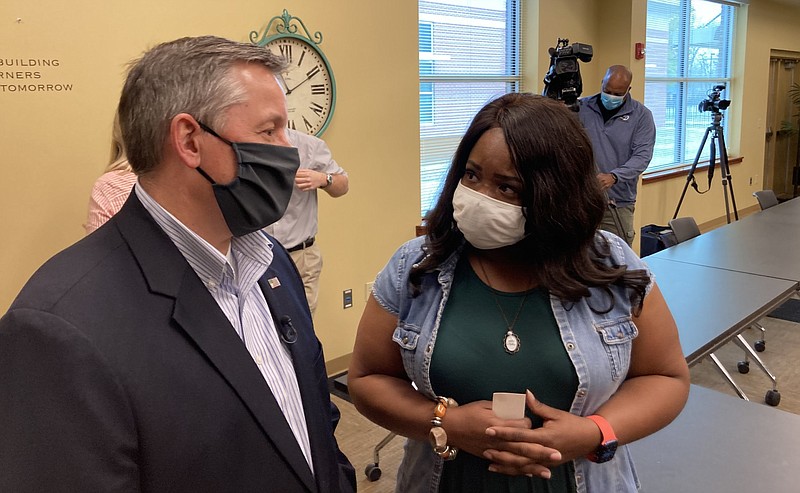 WASHINGTON -- With seating limited because of covid-19 restrictions, only one member of the Arkansas congressional delegation attended President Joe Biden's address to a joint session of Congress on Wednesday night.

U.S. Rep. Bruce Westerman, a Republican from Hot Springs, snagged one of the 200 or so available seats, enabling him to view the proceedings.

Assigned a spot on the sixth row, he sported a SHEMA97 Functional Active Mask, the kind worn by many Southeastern Conference coaches.

When the president appeared at 8:03 p.m., the 4th District congressman applauded politely, then captured the moment with his smartphone.

Like most of his Republican colleagues, Westerman clapped again when Biden called for ending "cancer as we know it" and urged Americans to get vaccinated against covid-19.

He sat in silence, however, when Biden declared that "health care should be a right, not a privilege in America."

Trillions of dollars in additional spending, the lawmaker had warned earlier in the day, is "the last thing our economy needs right now."

Prices are already rising, he said.

"I don't know what's taking the economists so long to figure this out, but there's definitely inflation out there," he said. "Just look at housing; look at energy costs. It's all going up right now."

"I think he's done a poor job, and I don't think he's lived up to his campaign promises. I think he's created more of a partisan atmosphere in D.C. I think he's acquiescing to everything that the far-left wants. ... He's created a crisis at the border that I think just solely lies at his feet," the congressman said.

Westerman decided to attend the speech, he said, "out of respect for the office [and] respect for our system of government."

With the Capitol closed to visitors and social distancing in place, the atmosphere was bound to be different than in past years, Westerman said.

"The temperature won't be as hot in the chamber as it normally is when you pack all those people in," Westerman said, shortly after the House gaveled in Wednesday afternoon. "Normally, you go in and it's like a refrigerator. By the time you leave, it's like an oven."

The other five delegation members from Arkansas -- all Republicans -- were content to monitor the Delaware Democrat's speech from afar.

With no House votes scheduled until May 11, most lawmakers are spending the week in their districts.

Westerman was in Washington to focus on House Natural Resources Committee duties, he said; he's now its ranking Republican.

"It was nice to see a speech that talked about moving the middle class up, moving the lower class up. You didn't see what you've seen in the past, which is partisan attacks," he said.

Looking at Biden's presidency, thus far, "I think you've got to call it a success," he said. "We're seeing the economy at a record rebound after a pandemic. We're seeing the vaccine availability and the distribution. And hope that we can come to some bipartisan solutions."