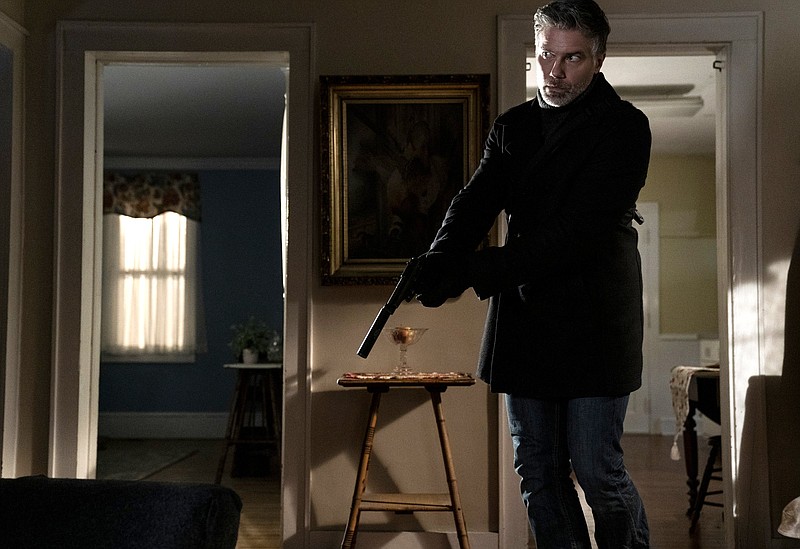 The Protagonist (Anson Mount) is a finely calibrated killing machine who’s undergoing a moral crisis in the reasonably OK B-movie “The Virtuoso.”

I say this despite having not seen much of his work -- scrolling through his IMDb page I notice he has worked a lot in movies I've never heard of and that he figures in the 21st-century iteration of the Star Trek multi-verse. (How I can be an Anson Mount fan without knowing that about him is a fair question.)

But I have seen Mount as Cullen Bohannon, the former tobacco planter and Confederate officer turned railroad thug on the AMC series "Hell on Wheels," and more importantly saw him in David Pomes' low budget meth horror film "Cook County." He makes a good anti-hero; there's something in his smile that implies menace.

So casting him as a highly efficient professional contract killer is a somewhat obvious move. Put the bestubbled Mount in a suit, style his hair and have him narrate the film in the second person, like in Jay McInerney's "Bright Lights, Big City." (The second person is tricky, but if done right, can force feelings of immediacy and dislocation: "You take the scope and fit it to the barrel ... you ease the sights onto the target ....)

Good enough ideas for a reasonable B-movie, especially if you can fill out the case with actors like Sir Anthony Hopkins (nice Oscars you got there, mate), Abbie Cornish, David Morse and Eddie Marsan (even if you can only get some of them for a day or two of shooting).

Now, let's dress up the generic script a little -- let's not give any of the characters actual names, let's refer to them as The Mentor (Sir Tony, of course), The Waitress (Cornish), The Deputy (Morse), The Loner (Marsan) and Handsome Johnnie and Johnnie's Girl (Richard Brake and Diora Baird, respectively). And let's stress how meticulous our protagonist, who at least thinks of himself as The Virtuoso, can be.

The film starts out, as it must, with a deftly executed sniper hit on some figure we presume is associated with organized crime (because The Protagonist tells us so in voice-over) in flagrante delicto with a hired lady in a high-rise hotel. The Protagonist has his escape planned out to the second, he has even factored in the time it will take for the call girl to pocket her client's cash before calling the desk manned by a flunky who will then call his boss who won't answer until the fourth ring because he is asleep. Since there are six seconds between rings that gives The Protagonist an extra 18 seconds to unhurriedly walk away from the scene.

But of course things don't always go perfectly, such as the time The Protagonist took on a "one-off" job without sufficient time for planning. Needing to make the hit look like an accident, he shot out a target's tire to cause his car to go out of control and crash into an RV and explode (which was good) but also to burn to death a bystanding innocent woman and her child, which is bad because The Protagonist only accepts contracts on people who have it coming (cue Clint Eastwood in "The Unforgiven": "We all have it comin', kid.").

This throws The Protagonist into a crisis of faith. Maybe he doesn't want to kill people for a living anymore. Maybe he will just adopt the white mop of a dog that has wandered into his orbit and sit by the fire with his loosened tie.

But The Mentor shows up to snap him out of his funk, accept the blame for collateral damage and tell The Protagonist a long, horrible story about Vietnam atrocities committed by himself and The Protagonist's father in country. His point is, uh, things happen? Get back up on that horse and ride, cowboy.

All this is (admittedly well-paced) prelude to the main mission, a "one-off" job with a 48-hour window, which involves The Protagonist traveling to a blighted small town to terminate a fellow hit person. But this job is weird, the only information he has about his target is that they are to be at a particular dive bar/diner at 5 p.m. on a certain date. That's where The Waitress, etc. come in.

The Mentor also gives him a slip of paper with two words written on it: "White Rivers."

Now, it would be wrong to claim that "The Virtuoso" is a good movie. It is not that, though it provides plenty of enjoyable moments -- it is occasionally funny, and people who like movies about hit men might like the way The Protagonist matter-of-factly does his work. And all the actors commit themselves to their genre movie roles. The script has some good ideas, even if the idea of a deeply conflicted killer is a bit of a cliche.

But the problem is, there's not really enough here -- "The Virtuoso" might have worked better as a short or as a dark comedy, but like a lot of strong silent men, the more time you spend around "The Protagonist" the more you realize he's really not that interesting. Director Nick Stagliano and screenwriter Jack C. Wolf are very good at suggesting a profundity that simply isn't there.