LSU gets to exhale on injury 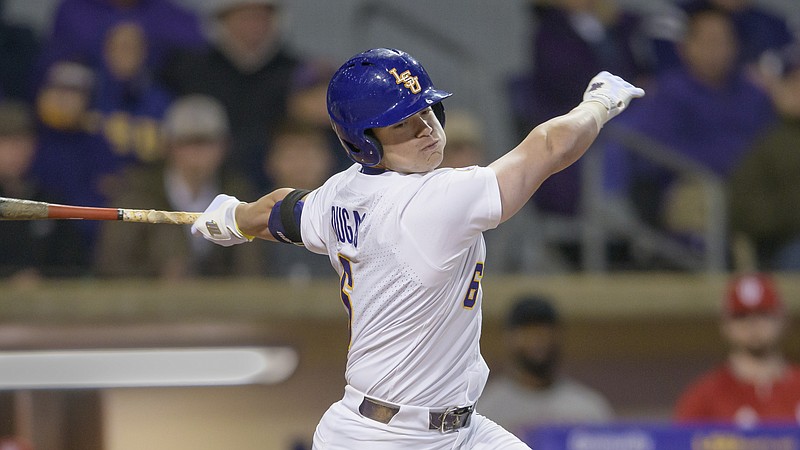 LSU junior outfielder Gavin Dugas is expected to be back in the Tigers’ lineup for this weekend’s series against Arkansas. Dugas, who leads the Tigers with 12 home runs and 44 RBI, sat out Tuesday’s game against Grambling State with back spasms. (AP/Matthew Hinton)

FAYETTEVILLE -- LSU junior left fielder Gavin Dugas should be back in the lineup for tonight's game against the University of Arkansas, Tigers Coach Paul Mainieri said.

Dugas, who is batting .288 with team-highs of 12 home runs and 44 RBI, woke up Tuesday with back spasms and missed his first game this season when LSU beat Grambling State 7-0 that afternoon.

"I just left the training room, and Gavin said he feels great," Mainieri said Thursday afternoon. "He's planning on lifting weights and going through a full practice. He doesn't anticipate any issues at all."

Mainieri smiled when asked how big of a relief it was that Dugas felt better.

"I'm glad he woke up with a back spasm on Tuesday instead of Friday," Mainieri said. "That's why coaches are so neurotic. You know how fragile everything can be.

"He's been great all year for us. He's had so many clutch home runs and played a great left field for us. He's been one of our better players. He's really come into his own this year."

LSU's 6-12 SEC record ranks 11th in the conference, but Arkansas Coach Dave Van Horn said there's no way the Razorbacks will be caught overlooking the Tigers.

"They're capable -- like any team in the league -- of having a great weekend and getting after you pretty good," Van Horn said. "So we're not taking anybody lightly, obviously. We know it's a big series."

It was announced on April 5 that Hill -- a projected first-round draft pick -- suffered a season-ending injury.

"The Los Angeles Dodgers orthopedic surgeon performed the Tommy John surgery," Mainieri said. "It definitely required surgery, but the ligament was not torn all the way through. So he was able to salvage that ligament to some degree. I think Jaden's well on his way to having a very strong elbow going forward.

"His work ethic is second to none. He's got a really positive attitude. I visited with him this week. He's ready to get going with his rehab. I think the hardest part for him is going to be slowing down and making sure that he doesn't go too fast with it all."

Mainieri said he anticipates Hill will make a full recovery.

"I expect him to get back to being who he is as a pitcher and have a really good professional career," Mainieri said. "Just very sad for him, and for our team, that his college career was shortened like it was."

"You know how much I think of Dave Van Horn," Mainieri said. "I have the greatest respect for him and the program that he has run for many years. I consider him a friend. I consider him a great coach. He always puts together a tremendous squad.

"He's got a complete team. They've got great players at every position. They obviously have a lot power, great athletes. He's got great arms. [Kevin] Kopps has really made a big difference for him at the end of games this year. It was a big thing for him to get [Casey] Opitz back behind the plate. He provides great leadership for their team.

"They're the No. 1 team in the country for good reason. They're really playing well. It's going to be a tremendous challenge for us. We're going to have to be at our very best to have a chance to beat these guys."

One local forecast for Baton Rouge is calling for a 30% chance of rain tonight, 40% on Saturday night and 80% on Sunday afternoon when the Razorbacks are scheduled to play the Tigers.

That forecast could result in changing the schedule and possibly Arkansas playing a doubleheader for the fourth consecutive weekend.

"We're going to have a meeting [Friday] morning with our event management staff as we get closer to game time and take a look at it and see if we have to make any adjustments," LSU Coach Paul Mainieri said. "We might have to make some adjustments.

"It's just speculation right now. I'd prefer to not even look into it that much. All the weather services have different forecasts. Some say the worst day is Sunday. Others have it equally each day.

"One thing I will tell you is that [the forecasts] change daily here. I don't know if it's because of the [Mississippi] river or the Gulf of Mexico or what it is. But it's very, very, very difficult to predict the weather here with any degree of accuracy.

"I don't mean that as a knock on our weather people. In 15 years here, I've seen it just change literally by the hour."