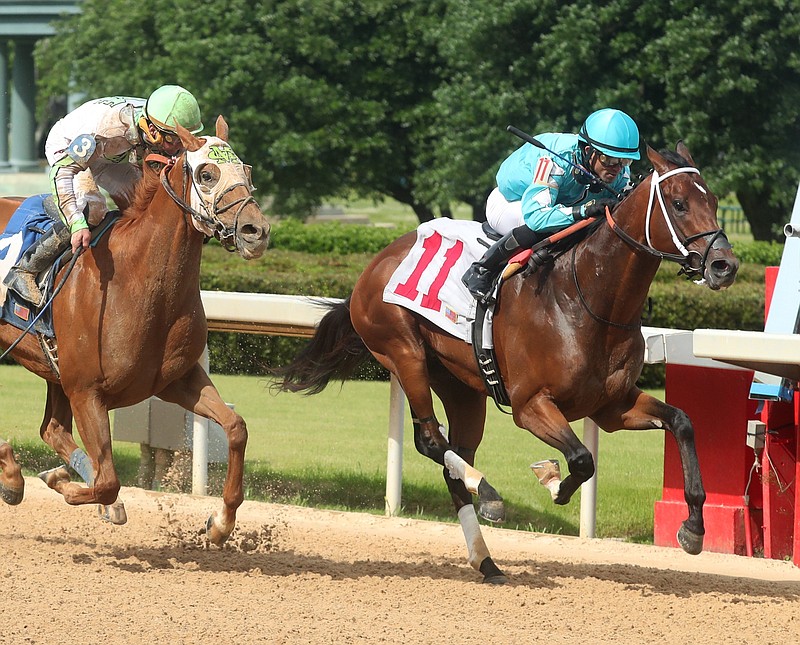 Jockey Joel Rosario and Man in the Can (11), right, outlast jockey Calvin Borel and KJ’s Nobility (3) to the wire to win the Arkansas Breeders Championship at Oaklawn on May 1, 2020. - Photo by Richard Rasmussen of The Sentinel-Record

HOT SPRINGS -- Everyone is in deep, even the favorite and defending champion.

Thirteen are entered in the $200,000 Arkansas Breeders' Championship for Arkansas-bred horses 3 years old and up at Oaklawn Casino Racing Resort today. Post time for the 1 1/16-mile race is scheduled for 5:40 p.m.

Ron Moquett trains 4-year-old Man in the Can, the 2020 Arkansas-bred champion. Man in the Can won this race last season by 2 3/4 lengths, and he is the 9-2 third choice in this season's race.

"It's a tough race, but we like our chances," Moquett said. "We know this distance is much better for him. I think he's built to go two turns, so now we just have to get a good trip, and hopefully he'll bring his A-game because it will take his A-game. Arkansas breds aren't easy anymore. These are all some pretty nice horses."

Robert Cline is the owner and trainer of 6-year-old Bandit Point, the 8-1 fifth choice in the Arkansas Breeders' Championship. Cline's fiancee Kelsi Harr is listed as the jockey.

Bandit Point was fourth in the race last season and third in 2019, the first stakes-placed finish for Bandit Point with Cline as a trainer and Harr as a jockey.

"I think he fits pretty dang good in this spot," Cline said.

Man in the Can made last year's race the first of two consecutive wins. His next start was a 13th-place finish in the Grade II Blue Grass Stakes, a Kentucky Derby qualifier. Man in the Can was injured in the Blue Grass and did not race again for five months.

"Luckily, the owners are very conservative and they let me do what I think," Moquett said. "I said, 'He's an Arkansas bred. Let's sit him out and let these wounds heal up and we'll get him ready for Arkansas.' "

In his last start, Man in the Can finished second in Oaklawn's 6-furlong Nodouble Breeders' Stakes on March 27.

"We've all got our own favorites, but Man in the Can has been such a classy horse, such an honest horse, that everybody was happy to see him reach his potential [in last season's Breeders' Championship]," Moquett said.

Tempt Fate won the Nodouble by 2 3/4 lengths as the 4-5 favorite and is the 5-2 favorite in the Breeders' Championship, which is his first two-turn start.

The Mary Rose, trained by 2020 Eclipse Award champion trainer Brad Cox, is the 7-2 morning-line second choice. Glacken's Ghost, an 8-year-old gelding trained by Mac Robertson, is the 6-1 fourth choice off a seventh-place finish in the Nodouble.

"The best horse doesn't always win the race," Cline said. "When you're chasing $120,000 for the win, that's life-changing money for a lot of people, so there are some people taking a chance. I think there's a handful that legitimately fit in there, and I think there are a few of them in there hoping for one of those long-shot wins."

Moquett grew up in Pocolo, Okla., just across the border from Fort Smith, and is a fan of the Arkansas Razorbacks. A Hot Springs resident, Moquett said he is a complete Arkansan, loyal to the state and Oaklawn.

Cline went to high school at Lake Hamilton and later Caddo Hills High in Norman, from which he dropped out shortly after the start of his junior year. Cline, who has since passed the General Educational Development Test, said he has known he wanted to become a horseman since childhood.

"I got out of high school because I was pretty sure this was what I wanted to do," Cline said. "I'm lucky. I still like riding horses. Now, don't get me wrong, sometimes I'd like a day off or to take an easy day, but for the most part, when I swing a leg over a horse, it's still fun to me."

Moquett said it is easy to root for Cline.

"You can't help but cheer for people like him, " Moquett said. "I have my favorite groups of people I root for, and it always seems to be the people who work the hardest. They seem like really good, honest, hard-working horsemen, and that's who you want to compete against, and if you don't win, that's who you hope wins. Robert's a good dude. I want to beat him, but from that point on, I cheer for him."

Cline said the results of goodness have worked well for him.

"I would way rather have a friend than an enemy in this game," he said. "I have always benefited from trying to be nice and cool to people. Just showing up with a smile on your face can go a long way."

"When you look at the race, there are four horses you could make a strong case for," Moquett said. "There are a lot of question marks like Tempt Fate. Can he go two turns? Is Mac Robertson's horse going to bring his A-game? He's a classy old route horse. There are a lot of questions that will be answered, and it's not a sure thing for anyone. We like our chances, but we respect everybody who's running against us."