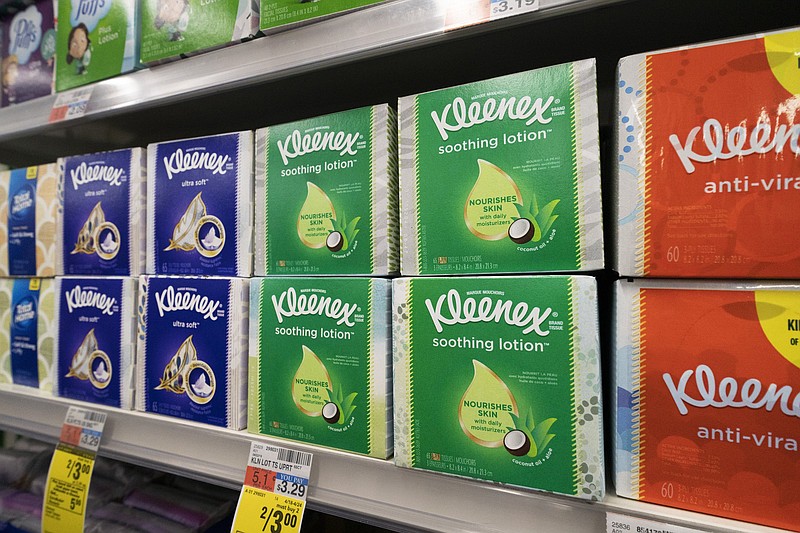 The prices of paper products like these tissues are about to rise. Procter & Gamble, Kimberly-Clark and Coca-Cola say raw material costs on many items are rising, so they’ll increase their prices. (AP/Mark Lennihan)

Toilet paper, baby care products, soft drinks and many other everyday products are about to get more expensive as demand outpaces supply.

Procter & Gamble, Kimberly-Clark and Coca-Cola have all warned that they'll raise prices on many of their plastic, paper, sugar, grain and products and other commodities are all getting more expensive as raw material costs rise. Companies are also paying more for shipping as fuel costs rise and ports experience longer delays because of congestion.

Procter & Gamble is raising prices on items like Pampers and Tampax in September. Hormel Foods has already increased prices for Skippy peanut butter and its turkey products.

Kimberly-Clark announced in March that it will raise prices on Scott toilet paper, Huggies and Pull-Ups in June, a move that is "necessary to help offset significant commodity cost inflation."

General Mills, which makes cereal brands including Cheerios, is facing increased supply-chain and freight costs "in this higher-demand environment," chief financial officer Kofi Bruce said on a call with analysts.

These price increases reflect what some economists are calling a major shift in the way companies have responded to demand during the pandemic.

Before the coronavirus hit, retailers often absorbed the cost when suppliers raised prices on goods, because stiff competition forced retailers to keep prices stable. The pandemic created chaos and confusion in global shipping markets, leading to shortages and price increases that have cascaded from factories to ports to stores to consumers.

Americans' shopping habits shifted rapidly when the pandemic hit -- with people spending money on treadmills and office furniture instead of going out to eat in restaurants and seeing movies at theaters.

In turn, this put enormous pressure on Chinese factories to produce these goods and ship them across the Pacific in containers. The demand, however, for shipping outstripped the availability of containers in Asia, yielding shortages that resulted in higher shipping costs.

The Consumer Price Index -- the measure of the average change in the prices paid by U.S. shoppers for consumer goods -- increased 0.6% in March, the largest rise since August 2012, according to the Bureau of Labor Statistics.

Higher costs are not affecting just the United States. British inflation hit 0.7% in March, fueled by the prices of oil and clothing.

In the beginning of the covid-19 crisis, companies were focused on responding to the surge brought on by panic buying, with people stocking up on items like toilet paper, cleaning supplies, canned food and masks, said Greg Portell, a partner at Kearney, a consulting firm. The government was watching for price gouging and customers were wary of being taken advantage of.

"When the pandemic first struck paper, toilet paper was like gold," Portell said. "The optics of trying to take a price increase during that time just weren't going to be good."

Despite the spike in demand, companies weren't in a position to balance out the price-and-cost equation. Now that the economy is beginning to stabilize, companies are starting to make different economic calculations, rebalancing pricing so that it better fits their profit expectations and takes into account inflation, which will drive up prices.

"This isn't an opportunistic profit-taking by companies," Portell said. "This is a reset of the market."

The government's recent stimulus packages have also given retailers more room to raise prices. People who have received unemployment benefits or stimulus checks are able to spend that money on consumer goods like toilet paper and diapers.

Many of those who retained employment during the pandemic also have been able to increase their savings. That means they have disposable income to spend on more expensive items like printers or desks for working at home, or on luxuries like televisions, hot tubs or kitchen remodels.

"Right now, demand is fiscally stimulated and very strong," Oxford Economics chief economist Gregory Daco said. "Even if you raise your prices, you're not necessarily going to lose market share, because most other producers are doing the same thing and because people have the means to buy."

However, businesses will still have to keep price increases reasonable and in line with competition.

"Businesses will tend to pass on what the consumer can stomach," said John Ruth, chief executive of Build Asset Management, an investment advisory firm. "You'll notice some price increases, but your hamburger isn't going to double in your local favorite drive-through."

Information for this article was contributed by Gillian Friedman of The New York Times and by Damian J. Troise of The Associated Press.