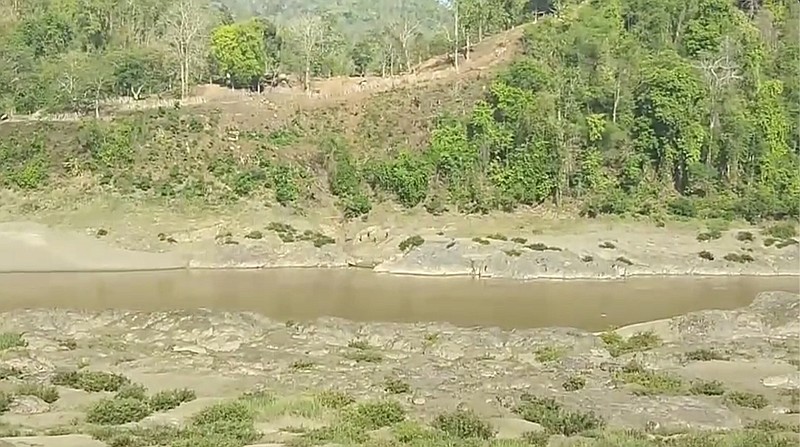 In this image from video, a riverside Myanmar Army base, top left, seized by Karen guerrillas is seen from Mae Sam Laep, Thailand near the border with Myanmar Thursday, April 29, 2021. Myanmar government forces launched airstrikes against ethnic minority guerrillas in two areas of the country on Wednesday, local reports said. (UGC via AP)

The attacks are the latest sign that as the junta attempts to control widespread protests in cities against its February seizure of power, it is facing new military challenges in other areas.

No group claimed responsibility for the attacks on the bases in Magway and Meiktila in central Burma, and the government said it is seeking those responsible.

Capt. Aye Thazin Myint, a junta spokeswoman, said at a news conference in the capital, Naypyitaw, that four 107mm rockets were fired at the air force base in Magway at 3 a.m. Thursday, with three landing in a field and one on a road. She said a building was slightly damaged in the attack, which the military determined originated from two nearby villages.

She said five rockets were fired between 5 a.m. and 9 a.m. at the air base in Meiktila, where gunfire was also heard from nearby villages.

The rockets are commonly used by insurgent groups because they are cheap and easily deployed, although they are not particularly accurate.

The junta, which ousted the elected government of Aung San Suu Kyi in its coup, is engaged in open warfare with guerrillas from the Kachin and Karen minorities, which have allied themselves with the protest movement against military rule.

SOFIA, Bulgaria -- A Russian diplomat will be expelled from Bulgaria after prosecutors alleged Russian involvement in explosions at several ammunition depots in the Balkan country, the Bulgarian Foreign Ministry said Thursday.

In addition to the ministry declaring "one more Russian diplomat persona non grata," Minister Ekaterina Zaharieva called on Russia's law enforcement agencies to cooperate with Bulgaria's investigations into the explosions so "the perpetrators will be discovered and brought to justice," the ministry said.

The prosecutor general's office in Bulgaria announced Wednesday that it was investigating a possible connection between four explosions at arms depots around the country and frequent visits by alleged Russian military intelligence operatives in the past decade.

Prosecutors suspect the four explosions were intended to disrupt supplies of ammunition to Ukraine and Georgia, and may be linked to an explosion at a depot in the Czech Republic in 2014.

Bulgaria, which joined NATO in 2004 and the European Union in 2007, has close historical ties with Russia and continues to be dependent on its energy supplies.

JERUSALEM -- A stampede broke out early today at a Jewish religious gathering attended by tens of thousands of people in northern Israel, killing dozens and leaving scores injured, authorities said. Israeli media reported that at least 40 people were killed and published photos of rows of bodies.

The disaster occurred at Mount Meron at the main celebrations of Lag BaOmer, a holiday when tens of thousands of people, mostly ultra-Orthodox Jews, gather to honor Rabbi Shimon Bar Yochai, a 2nd-century sage and mystic who is buried there.

Prime Minister Benjamin Netanyahu called it a "great tragedy," and said everyone was praying for the victims.

The incident happened after midnight Thursday, and the cause was not clear. Videos on social media showed large numbers of people packed together in tight spaces.

A 24-year-old witness, identified only by his first name, Dvir, told the Army Radio station that "masses of people were pushed into the same corner and a vortex was created." He said a first row of people fell down, and then a second row, where he was standing, also began to fall down from the pressure of the stampede.

Israeli media earlier reported that a grandstand had collapsed, but the rescue service said all the injuries happened in a stampede.

JERUSALEM -- President Mahmoud Abbas announced early today that the first Palestinian elections in 15 years will be delayed, citing a dispute with Israel to call off a vote in which his fractured Fatah party was expected to suffer another embarrassing defeat to the Hamas militant group.

Hamas slammed the move as a "coup." But the indefinite postponement will be quietly welcomed by Israel and Western countries, which view the Islamic militant group as a terrorist organization and are concerned about its growing strength.

For ordinary Palestinians, the delay leaves in place a long-entrenched political leadership that has failed to advance their hopes for statehood, heal the bitter rift between Fatah and Hamas or lift the blockade on the Gaza Strip, and which is seen as increasingly corrupt and authoritarian.

Abbas insisted elections could not be held without the full participation of Palestinians in east Jerusalem. Israel has yet to say whether it would allow voting by mail there as in past elections and has enforced a ban on Palestinian Authority activities, including campaign events.

But delaying the elections over Jerusalem could also be seen as a pretext, because only a small number of voters in the city would actually require Israel's permission.