State stopping vaccine orders to use up stock 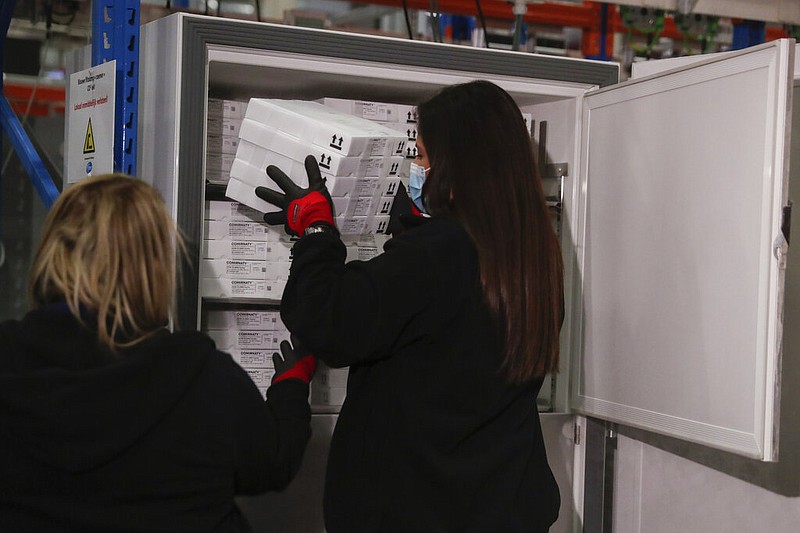 A refrigerator is filled with Pfizer covid-19 vaccine doses at the Pfizer vaccine production site in Puurs, Belgium, in this March 30, 2021, file photo. (Stephanie Lecocq, Pool via AP)

A week after significantly cutting back on its coronavirus vaccine orders from the federal government for the first time, Arkansas decided to hold off on ordering any more at all for next week.

State Epidemiologist Jennifer Dillaha said Thursday that Arkansas isn't ordering any first or second doses of the Pfizer or Moderna vaccines for next week or any doses of the single-shot Johnson & Johnson vaccine.

"We're going to use our existing stock, and if locations need additional vaccine, we will redistribute from what's already in the state," Dillaha said.

Instead of receiving shipments of vaccine designated for second doses of the Pfizer and Moderna vaccines' two-dose regimens, pharmacists and other providers will be able to use what they have to provide either first or second doses, she said.

"There's enough vaccine now that it's not necessary to so rigidly maintain a separation of those first- and second-dose orders," Dillaha said.

Also, she said, "we want to use the older stock first, so that we don't run into a situation where vaccine is expiring."

In a teleconference, Gov. Asa Hutchinson said he plans to lay out a timeline next week of goals for vaccinating more of the state's population.

"By next fall, when school starts, we have to get up to a higher percent of our population," Hutchinson said during the event hosted by the Arkansas Center for Health Improvement, the Arkansas Municipal League and other organizations.

"We can't settle at a 50% vaccination rate, because then this will turn into a winter problem. Our cases will skyrocket again. We'll have breakouts again, and we'll have people dying as a result of it."

Meanwhile, the pace of vaccinations in Arkansas continued to slow Thursday as the state's count of cases rose by 240.

The number of people hospitalized in the state with covid-19 rose by one, to 166.

The state's death toll from the virus, as tracked by the state Department of Health, rose by nine, to 5,735.

The decision to stop ordering more vaccine represents a dramatic shift from earlier phases of Arkansas' vaccination effort, when names piled up on waiting lists and available appointment slots filled up within hours.

By last week, the state's inventory of doses had grown large enough that it decided to only order about 40% of the more than than 77,000 initial Pfizer and Moderna doses that it was allocated for this week.

It was allotted the same amount for next week, along with 6,700 doses of Johnson & Johnson.

"I think that the early adopters have gotten the vaccine, and so it's those people that are still considering it" who haven't gotten their shots, Dillaha said.

"We want to support them in their process for making an informed decision, and we also want to address barriers or problems that people maybe having getting the vaccine.

"In addition we want to take steps to see what we can do to just make it easier for people to get vaccinated."

She said that includes expanding the number of pharmacies and clinics offering the vaccines and making the shots available in settings such as hospital emergency rooms and Arkansas Travelers baseball games.

"We're looking at options so that people can get vaccine in places that they would ordinarily be going for other reasons," Dillaha said.

If a provider needs more vaccine next week, Dillaha said the Health Department can coordinate the transfer of doses from another provider or have members of the Arkansas National Guard ship doses from the department's headquarters in Little Rock.

She said the state will decide on a "week-by-week basis" whether to order more.

About 80,000 Pfizer and Moderna doses were designated to provide the second shots of those vaccines' two-dose regimens, Col. Robert Ator, who is coordinating the state's vaccination program, said Tuesday.

Any portion of the weekly allocation the state doesn't order in a given week can still be ordered later, Dillaha has said.

"I think the demand for vaccines has gone down so significantly that a lot of pharmacies have a lot of vaccine at the moment and no arms to put it in," she said.

At her store, she said the demand for first doses started to fall last week and has "drastically decreased again this week."

She said the pharmacy has about a two-week supply built up and had already stopped requesting new initial doses from the Health Department.

By the end of next month, she said her pharmacy will likely phase out the use of its nearby vaccination center and just give the shots in the store.

"I really see that our vaccine efforts are going to be more on locations -- at churches, at schools, trying to get to those people," she said.

For instance, she said the pharmacy gave shots to 40 or 50 people, including students and parents, on Wednesday at North Little Rock High School.

On Saturday, she said, it has a clinic scheduled at Winfield United Methodist Church in Little Rock.

John Vinson, CEO of the Arkansas Pharmacists Association, said he hadn't heard from any pharmacists who were concerned about not having enough vaccine.

"I think it's a good idea, as long as we have a good support system in place, which I think we do, to use the existing inventory we have," Vinson said.

Hutchinson on Monday said the use of Johnson & Johnson's vaccine could resume in Arkansas after a nationwide "pause" that was implemented on April 13 after some people outside Arkansas who received the shot developed a rare blood-clotting disorder.

The University of Arkansas, Fayetteville will resume giving out those shots on Monday at its on-campus medical center, UA spokesman Zac Brown said.

"We will continue to offer the Pfizer vaccine as well," Brown said in an email. "We will still require everyone to call to schedule their appointments, but this is so our team can continue answering any questions and/or determine which vaccine would be best for them."

Arkansas Tech University resumed on-campus administration of the Johnson & Johnson shots on Wednesday, university spokesman Sam Strasner said. A total of seven shots were given out that day at the on-campus health center, he added.

The Health Department reported the number of vaccine doses that had been administered in the state, including second doses of the Pfizer and Moderna vaccines, grew Thursday by 14,774.

That was almost 5,900 doses lower than the increase a week earlier.

Over a rolling seven-day span, the total number of doses that had been administered dipped below 100,000 for the first time since the week ending March 6.

According to the U.S. Centers for Disease Control and Prevention, the number of Arkansas who had received at least one vaccine dose rose Thursday by 6,820, to 1,067,532, representing about 35.4% of the state's population.

Nationally, 43.3% of people had received at least one dose and 30% had been fully vaccinated.

Hutchinson this week signed bills barring the state, cities and public schools from imposing mask mandates or requiring covid-19 vaccinations as a condition of employment or to access services.

His signing of Senate Bill 615, which seeks to prevent the use of "vaccine passports," came even after he said he didn't want to restrict private businesses from requiring customers to provide proof of vaccination in some instances.

On Thursday, he said the law doesn't apply to private business even though its sponsor, Sen. Trent Garner, R-El Dorado, insisted that it does.

The law says "the state, a state agency or entity, a political subdivision of the state, or a state or local official shall not require an individual to use a vaccine passport in this state for any purpose." In the next sentence, it says: "The use of a vaccine passport shall not be a condition for entry, travel, education, or services."

Hutchinson, in a statement, said that sentence "applies only to state agencies in my judgment."

Garner said the bill doesn't specify to whom that sentence applies because he wanted it to be a "catch-all" that would include all types of entities.

He said he was clear in his testimony on the bill that he meant for it to apply to private businesses.

John DiPippa, the former dean of the University of Arkansas at Little Rock's William H. Bowen School of Law, said the law could be read either way.

"It really doesn't matter what a sponsor of a bill thinks it means," DiPippa, now a professor of constitutional law and public service at the law school, said. "It only matter what it says."

For the issue to be settled, he said, someone would have to file a lawsuit challenging a businesses' use of a vaccine passport. Then it would be up to the courts to decide which interpretation of the law is correct.

An emergency clause that would have made SB590, also by Garner, take effect immediately upon Hutchinson's signing it Thursday failed to pass in the Senate.

Education Secretary Johnny Key said the state Department of Education "initially had concerns that SB590 would prohibit districts from continuing mask policies through the end of the school year."

"Since the emergency clause did not pass and the law won't go into effect immediately, districts can now finish the school year with the policies that were adopted locally," Key said in a statement. "We are satisfied with that result."

In Hamburg, a case of covid-19 in a pre-kindergarten class at Noble Elementary School resulted in 17 students and adults having to quarantine starting on April 19 because of exposure to the virus, said Tracy Streeter, superintendent of the Hamburg School District.

Streeter said there's been "a lot of communication and a lot of explaining this entire year" to parents about issues related to covid-19 exposure.

The recent case reinforced how the potential for exposure among a class of 3- to 4-year-olds is different than in a class of eighth-grade students, for example, Streeter said, with hands-on separation of students required during a class day for such a young group.

When it comes to a covid-19 case in schools, "no two cases are alike, so that has made the communication part much more difficult," Streeter said.

The increase in cases Thursday was smaller than the one a day earlier but larger, by 79, than the one the previous Thursday, April 22.

As a result, the average number of cases added to the state's tallies over a rolling seven-day period rose to 187, the highest level in a week.

The number of the state's virus patients who were on ventilators rose by two, to 29.

The cases added Thursday included 156 that were confirmed through polymerase chain reaction, or PCR, tests.

The other 84 were "probable" cases, which include those identified through less-sensitive antigen tests.

The number of cases that were considered active rose by 53, to 1,961, as new cases outpaced recoveries.

Department of Corrections spokeswoman Cindy Murphy said the Ouachita River Unit in Malvern had two new cases among inmates. A total of 18 cases at the prison were active as of Thursday, she said.

Among nursing home and assisted living facility residents, the state's count of virus deaths remained at 2,074.