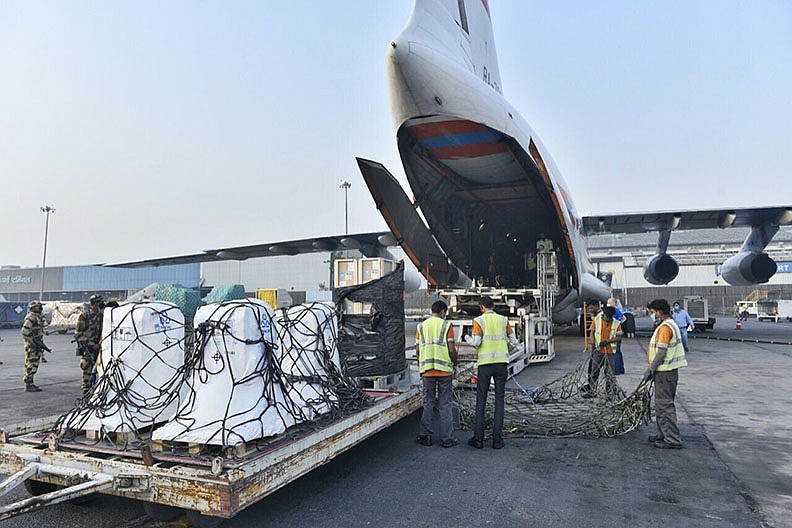 A shipment of oxygen concentrators, ventilators and other medical supplies that arrived from Russia is unloaded Thursday at an airfield in India. (AP/Indian External Affairs Ministry)

India's Health Ministry on Thursday reported 379,257 new infections -- a global record -- and 3,645 deaths, bringing the total number of confirmed cases to more than 18 million. The official death toll reached more than 204,000, a figure that experts say is a vast undercount.

India's armed forces were setting up field hospitals and would open medical facilities to civilians "wherever possible," according to a statement Thursday from Prime Minister Narendra Modi's office.

The State Department late Wednesday urged U.S. citizens to refrain from traveling to India "or to leave as soon as it is safe to do so."

The U.S. Centers for Disease Control and Prevention said: "Even fully vaccinated travelers may be at risk for getting and spreading covid-19 variants and should avoid all travel to India."

[Video not showing up above? Click here to watch » https://www.youtube.com/watch?v=RkbIxIZwwVk]

Yet Indian voters were forming long lines at polling booths Thursday to cast their ballots in the final stage of the West Bengal elections.

"In line with the covid-19 protocols, I call upon people to cast their vote and enrich the festival of democracy," Modi tweeted in the morning.

Indians reported fighting online to register for vaccine appointments as the system opened to all adults Wednesday, with a goal of starting mass immunizations Saturday. Slots were either quickly snapped up or the website repeatedly crashed, residents said.

India is one of the world's largest vaccine producers but has struggled to ramp up supplies, citing shortages of specialized material as global demand spikes. Fewer than 2% of India's population is fully vaccinated, compared with nearly 30% in the U.S.

The White House said Wednesday that the U.S. has "redirected its own order of AstraZeneca manufacturing supplies to India," allowing it to produce more than 20 million doses of the vaccine that the British-Swedish company developed with Oxford University.

About 10% of India's population of nearly 1.4 billion has received at least one dose of a vaccine, after an immunization program targeting vulnerable populations began in January. Since then, however, the campaign has struggled to get off the ground.

In the meantime, authorities relaxed public health restrictions and green-lighted religious festivals and political rallies. Those moves and the appearance of more virulent variants seeded outbreaks that have engulfed the nation.

The African continent, with roughly the same population as India and fragile health systems, "must be very, very prepared" for a similar scenario, John Nkengasong, director of the Africa Centres for Disease Control and Prevention, told reporters.

Africa's vaccine supply relies heavily on India, whose Serum Institute is the source of the AstraZeneca vaccine distributed by the global COVAX project to get doses to low- and middle-income countries. But India's export ban on vaccines "has severely impacted the predictability of the rollout of vaccination programs and will continue to do so for the coming weeks and perhaps months," Nkengasong said.

"We are living in a world that is extremely uncertain now," he added.

Just 17 million vaccine doses have been administered across the African continent for a population of some 1.3 billion, according to the Africa CDC.

The situation in India is "very sad to observe," the World Health Organization's Africa chief told reporters. "We are very concerned about the delays that are coming in the availability of vaccines," Matshidiso Moeti added.

"We call upon countries that have extra doses to do their part," said WHO colleague Phionah Atuhebwe, adding that the WHO is reviewing the Chinese-made Sinopharm and Sinovac vaccines.

In Mexico, as many as one-third of the population may have been exposed to the coronavirus by the end of 2020, according to a study of random blood samples taken between February and December.

Antibodies were found in 33.5% of samples from blood banks and medical laboratory tests in Mexico unrelated to covid-19. The levels varied according to regions; in general, areas along the U.S. border had higher rates.

But Victor Borja of the Mexican Social Security Institute stressed that the country was still far from herd immunity.

Authorities have suggested that with almost 350,000 virus-related deaths, and about 40 million Mexicans exposed to the virus, the mortality rate could be just under 1%.

Moreover, the study suggested about 86% of those infected had developed effective antibodies, but that around 14% hadn't and could be reinfected.

Mexican authorities also announced they detected three cases of the South African variant Tuesday. The U.K. and Brazilian variants have already been detected in the country, but Mexico does relatively little variant testing.

The country has received about 22.6 million vaccine doses and given almost 17 million shots, covering more than 12 million people, some of whom have gotten two doses. That remains a small amount for a country of 126 million. Mexico has vaccinated many of its senior citizens and plans to begin vaccinating people between 50 and 59 in May.

In Turkey, people stocked up on groceries, filled markets and left cities for their hometowns or the southern coast Thursday as the country prepared to enter its strictest lockdown of the pandemic.

President Recep Tayyip Erdogan imposed a "full lockdown" from Thursday evening until May 17 amid soaring covid-19 cases and deaths. The Turkish government had previously opted for partial lockdowns or weekend curfews in a bid to reduce the economic impact.

Under the new restrictions, residents are required to stay home except for grocery shopping and other essentials, while intercity travel is allowed only with permission. Restaurants are allowed to deliver food.

Many people left large cities such as Istanbul and Ankara to spend the shutdown -- which spans the holy Muslim month of Ramadan, as well as the three-day Eid holiday -- at vacation homes on the coast. Bus terminals and airports were packed with travelers, while vehicles backed up in severe traffic at the entrance of the Aegean coastal resort of Bodrum, broadcaster Haberturk and other media reported.

People crowded shops to stock up on food and other supplies even though grocery stores are to remain open.

Shops selling alcohol are among those being forced to close, and social media saw an uproar as users accused Erdogan's conservative government of trying to impose its Islamic values.

Information for this article was contributed by Erin Cunningham, Antonia Noori Farzan, Paul Schemm and Jennifer Hassan of The Washington Post; and by Cara Anna, Suzan Fraser and staff members of The Associated Press. 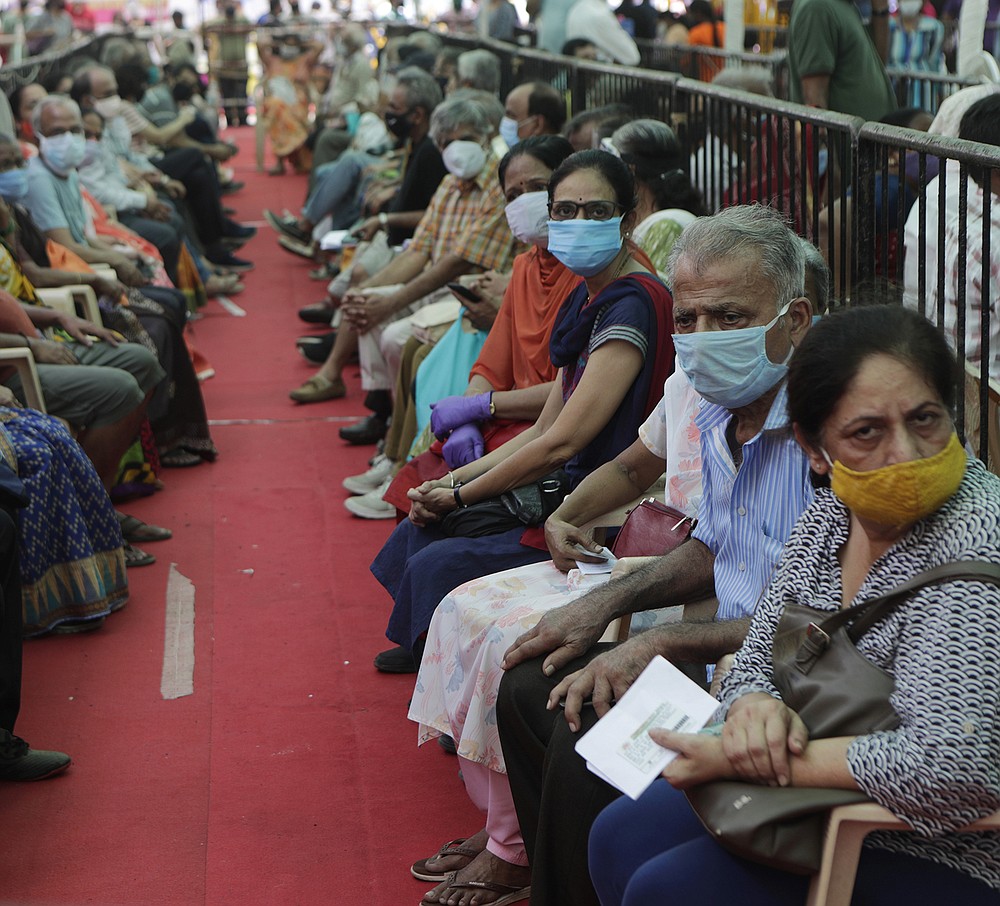