OPINION | PRESTON JONES: War's not over 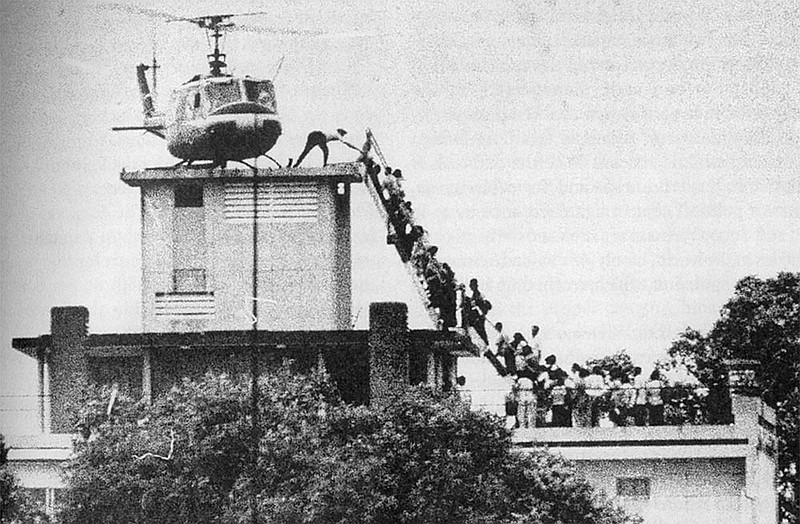 A member of the CIA helps evacuees up a ladder onto an Air America helicopter on the roof of 22 Gia Long Street April 29, 1975, shortly before Saigon fell to advancing North Vietnamese troops.

Near the heart of Ho Chi Minh City, which many Vietnamese still call Saigon, is a small park. On three sides, endless droves of scooters go by. The fourth side is an entrance to a high-rise mall.

On a corner across the street is Cog Cà phê, a Vietnamese coffee shop chain whose communist symbolism is as thick as its entrepreneurial vibe. The café is like Vietnam itself, or at least the southern half of it: Communist propaganda is everywhere, and, so far as the casual observer can tell, it's universally ignored.

A few minutes' walk from the park will take you to a large statue of Ho Chi Minh, a site of much picture-taking but little obvious reverence. A couple minutes' more walking through a multi-block shopping plaza will take you to one of two McDonald's in the area.

Did the ideals the United States sought to promote lose out in the Vietnam War? Yes. Will those ideals ultimately win in Vietnam? I think so. In 1970, the Korean War looked like a loss, but no one who visits South Korea today would say that.

Across the street from the park in Saigon is a somewhat dilapidated building. It's the site of one of the Vietnam War's best-known photographs. The photo shows people scrambling up a ladder to the roof of a structure where a small helicopter is waiting to whisk some of them away. The photo was taken on April 30, 1975--the day North Vietnamese forces captured Saigon.

I don't know how many hours in multiple visits I've spent in that park looking up at that building and reflecting partly on the wrenching tragedy it symbolizes and partly on the fact that I was the only one who seemed to care or even notice.

The greatest surprise in my trips to Vietnam has been how little young Vietnamese seem to care about the war. Even that's an overstatement. They don't care about it at all. They're worried about China in the future, not the U.S. in the past. It's strange for a history teacher to say so, but historical forgetfulness has helped to make Vietnam's forward-looking, booming economy possible.

But as I imagine that building, the helicopter and the scrambling people, I also remember the sense of loss Vietnam veterans feel here and in Vietnam. One in Siloam Springs told me that the photo of April 30 brings to mind the sense that "our politicians deserted the country of South Vietnam," leaving three generations to waste under communist rule.

Then there are the dead. Many reading these words can name men who went to Vietnam but didn't return alive. Anita Deason, Sen. John Boozman's tireless military and veteran liaison, told me about her "first secret crush," Ralph McCoy of Mayflower, killed in Vietnam in 1971.

And then there are the ones who never came home at all. Fifteen Arkansans remain missing in action from the Vietnam War. Lawrence Mailhes, Richard Moran, Ronald Roehrich, James Sheppard, William Smith, Lynn Travis and Karl Worst were shot down or lost in air crashes. John Shewmaker was aboard a landing craft that sank. Cleveland Evans was killed while defending a downed helicopter. Linus Oakley was engulfed by an ocean wave. Richard Wilson died when his truck slid off a bridge and into a river. Don Worley was killed by North Vietnamese in Laos. Walter Moon, Harold Bennett and Solomon Godwin are known to have been captured but their remains were never recovered.

As of November 2019, the POW/MIA flag has flown daily at all post offices. When you see that flag, remember these fifteen. And then remember their relatives, some still living in Arkansas, who experience the daily gnawing of unknowing. And then wish the best to the professionals in the Defense Department's POW/MIA Accounting Agency who quietly but persistently work to bring home the remains of as many of our lost service members as possible.

The more I learn about the Vietnam War, the less I understand it. No matter how one responds to its many controversies, everything leads to a tragedy sealed on April 30, 1975.

But the Korean War, too, was a tragedy. The present-day miracle that is South Korea doesn't compensate for that conflict's loss and suffering--for the nearly 8,000 Americans (100 of them Arkansans) still missing from that conflict--but it does give the effort some meaning.

Saigon's fall marked an end, but also a beginning. In 1975, Vietnam began a nationwide experiment with communist economics and the repression that always goes with it. That experiment failed, and so something new is brewing. Whatever Vietnam's economic system is today, it isn't communist. And while open dissent is still dangerous in Vietnam, it's easy to access American news on the Internet.

That old makeshift helicopter pad immortalized in a photograph 46 years ago is shabby. The mall across the street is new. The communists were wrong. Vietnam can prosper.

Our countries can be friends.

Preston Jones lives in Siloam Springs. He oversees the website "War & Life: Discussions with Veterans" (warandlifediscussions.weebly.com). Contact him at pjones@jbu.edu.