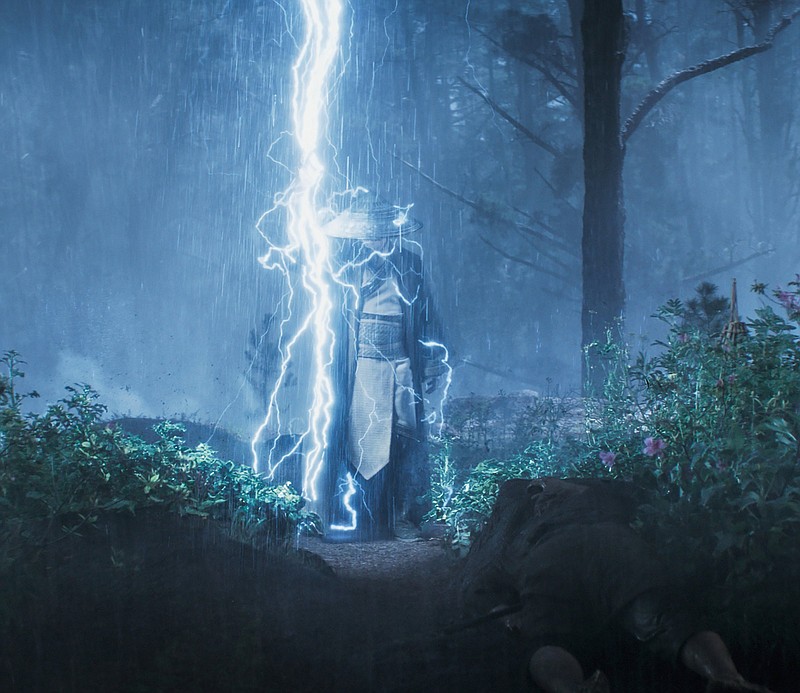 Lord Raiden (Tadanobu Asano) leads the humans of Earthrealm against the demons of Outworld in the action adventure “Mortal Kombat.”

Simon McQuoid's new "Mortal Kombat" film pushes the limits of what narrative can be, but not at all in a good way (instead, maybe it pulls the limits ..?). Amateurishly constructed, with precious little ebb and flow, it does at least provide us the answer to just how little connective tissue between bloody battle royales you need in order to reach feature length. Still, if you're in the market for a good four-armed monster disemboweling, you're in all kinds of luck.

It's based on a classic 1:1 combat video game that began in the early '90s, and has spawned 10 sequels, TV shows, cartoons, a platinum soundtrack album, a live tour, and, of course, a pair of previous films that came out in the mid-'90s to middling reviews and decent box office, all surrounding a story that's essentially a never-ending series of super-violent death matches.

With this new treatment, screenwriters Greg Russo and Dave Callaham make the obvious choice to lift the gist of Bruce Lee's all-timer, "Enter the Dragon," and pile everything into an ongoing, multi-dimensional tourney to the death to crown an eventual champion, adding bits and pieces of ephemeral story, one imagines, to help pad the film's running time to feature length. Reader, it doesn't go well.

Best not to linger terribly long on the film's comings and goings. It brings together a rag-tag group of dragon-marked champions to stand for Earth in this ritual combat competition among the assorted other realms. Outworld is the dominion of Shang Tsung (Chin Han), and his band of merry warriors -- including a huntress with batwings (Mel Jarnson), a Boba Fett fella (Damon Herriman) with glowy eyes, a giant hulking brute (Nathan Jones) with a huge battleclub, and the formidable Sub-Zero (Joe Taslim), who fashions ice into deadly weapons. Not that they seem much to care, but their domain is also a desolate wasteland that looks like the aftermath of a superfund site.

In any event, Shang Tsung only needs one more victory to assume complete dominion over the Earthrealm, and this time around the dude is taking no chances. He dispatches Sub-Zero to kill all the Earth champions before they even have a chance to train for the competition. This hit-list includes Cole Young (Lewis Tan), a mostly washed-up MMA fighter, competing for peanuts in a low-rent ring. This attracts the attention of another Earth Champion named Jax (Mehcad Brooks), a former commando in special forces, also emblazoned with the telltale dragon tatt, who does battle with Mr. Zero instead, graphically losing his arms in the process.

Eventually, Cole ends up in a mystical underground desert training area, where he hooks up with Jax, now restored with metal arms, and Jax's ally, Sonya Blade (Jessica McNamee); a pair of cousins, the fireball firing Liu Kang (Ludi Lin), and the razor-hat throwing Kung Lao (Max Huang); and an Australian lout named Kano (Josh Lawson), under the watchful eye of Earth's current leader, Lord Raiden (Tadanobu Asano). The group, with precious little training and even less cohesion, appears to be easy pickings for Shang Tsung and his demonic assassins, but he underestimates their gumption and fighting spirit.

There's not much more to it than that, but if you've come for CGI-laced, inter-realm ultraviolence you'll enjoy a very full plate. Not to ruin the surprises, but along the way you can enjoy heads being sliced in half and cracked open, spines being yanked out, the aforementioned creature disemboweling, open wounds spurting blood and entrails, and a host of other blood-soaked goodies, true to the original game play.

Since the fighting is about the only thing the film has to offer, I would say it's reasonably choreographed, if not particularly inspired (CGI has a tendency to do that in these movies), save for one most welcome element: The film does at least dispatch with purely gender-based match-ups, allowing the fearsome Sonya to go at whomever happens to get in her way (making a point of sending her against someone other than "the bitch with the teeth" in favor of a male villain). It might seem a small thing, but it's a glimmer of spark in an otherwise densely smoke-filled room.

Fans of the game will no doubt know everything they need to about the champions and their respective inner powers (brought forth from their inner souls or some such thing), newcomers will have to learn on the fly. There certainly are enough battles, but the script is so poorly constructed, even the final showdowns feel herky-jerky and unrealized. It shouldn't be too much to ask that a story about an orphan whose bloodline includes one of the greatest Samurais in history should get to combat the killer of his family line with a proper set-up, but alas, the filmmakers saw otherwise.

That's about enough of that. Between this film and Warner's previous "Kong vs. Godzilla,"HBOMax's pledge to bring a new theatrical release to the channel each month doesn't feel like an enticement as much as a promised threat.