Prices increase as manufacturers race to get shells to stores, supply police forces by The Associated Press | August 1, 2021 at 5:02 a.m. 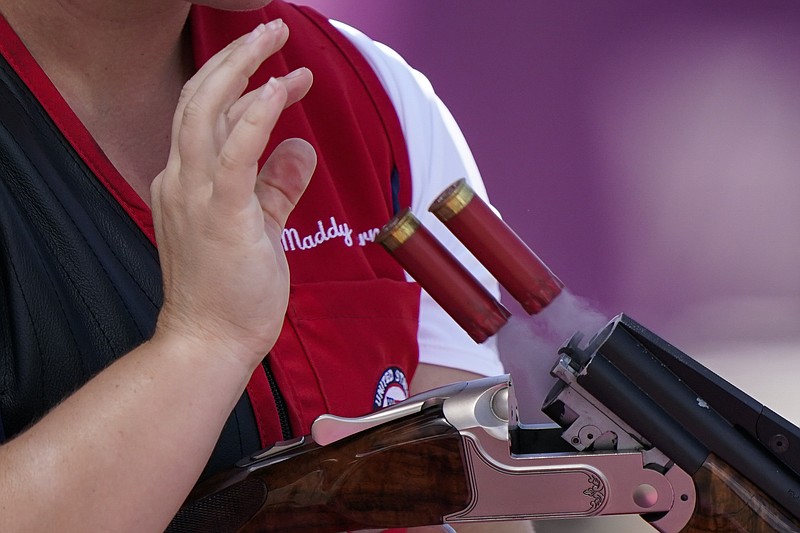 FILE - In this Thursday, July 22, 2021, file photo, Madelynn Ann Bernau, of the United States, ejects her shells during practice at the Asaka Shooting Range ahead of the 2020 Summer Olympics in Tokyo, Japan. The COVID-19 pandemic coupled with record sales of firearms have created a shortage of ammunition in the United States that has impacting competition and recreational shooters, hunters, people seeking personal protection and law enforcement agencies. (AP Photo/Alex Brandon, File)

SEATTLE -- The covid-19 pandemic, coupled with record sales of firearms, has fueled a shortage of ammunition in the U.S. that's impacting law enforcement agencies, people seeking personal protection, recreational shooters and hunters -- and could deny new gun owners the practice they need to handle their weapons safely.

Manufacturers say they're producing as much ammunition as they can, but many gun store shelves are empty and prices keep rising.

Ammunition imports are way up, but at least one U.S. manufacturer is exporting ammo. All while the pandemic, social unrest and a rise in violent crime have prompted millions to buy guns for protection or to take up shooting for sport.

"We have had a number of firearms instructors cancel their registration to our courses because their agency was short on ammo or they were unable to find ammo to purchase," said Jason Wuestenberg, executive director of the National Law Enforcement Firearms Instructors Association.

"A few months ago, we were at a point where our shelves were nearly empty of 9mm ammunition," he said.

In response, instructors took conservation steps like reducing the number of shots fired per drill, which got them through several months until fresh supplies arrived, Tangen said.

Officer Larry Hadfield, a spokesman for the Las Vegas Metropolitan Police Department, said his department also has been affected by the shortage.

"We have made efforts to conserve ammunition when possible," he said.

The National Shooting Sports Foundation, an industry trade group, reports more than 50 million people participate in shooting sports in the U.S. and estimates that 20 million guns were sold last year, with 8 million of those sales made by first-time buyers.

"When you talk about all these people buying guns, it really has an impact on people buying ammunition," spokesman Mark Oliva said. "If you look at 8.4 million gun buyers and they all want to buy one box with 50 rounds, that's going to be 420 million rounds."

That jumped to almost 39.7 million in 2020 and to 22.2 million just through June 2021 alone. The actual number of guns sold could be much higher, because multiple firearms can be linked to a single background check.

No data is available for ammunition because sales are not regulated and no license is required to sell it.

As the pandemic raced across the country in early 2020, the resulting lockdown orders and cutbacks on police response sowed safety fears, creating an "overwhelming demand" for both guns and ammo, Oliva said. Factories continued to produce ammunition, but sales far exceeded the amount that could be shipped, he said.

"Where there is an increased sense of instability, fear and insecurity, more people will purchase guns," said Ari Freilich of the Gifford Law Center to Prevent Gun Violence.

"Early on in the pandemic, we saw people hoarding toilet paper, disinfectant, and now, it's ammo," he said.

Wustenberg emphasized the danger in first-time gun buyers not being able to practice using their new weapons. Going to the gun range entails more than trying to hit a target, he said.

It's where shooters learn fundamental skills like always pointing their guns in a safe direction and keeping their fingers off the trigger until they're ready to fire.

"It's that old adage: Just because you buy a guitar doesn't mean you're a guitar player," Wustenberg said. "Some have the misconception of 'I shot this target 5 yards away and did just fine so I'm OK if someone breaks into my house.' You've got to go out and practice with it."

The U.S. military is not affected by the shortage because the Army produces ammunition for all branches of the military at six sites across the country, according to Justine Barati, spokesperson for the U.S. Army Joint Munitions Command.

The U.S. shooting team, which won four medals at the Tokyo Olympics, also had the ammo needed to train thanks to a commitment from sponsors, said Matt Suggs, CEO for USA Shooting.

Jason Vanderbrink, a vice president at Vista Outdoor, which owns the Federal, CCI, Speer and Remington ammunition brands, said the companies are shipping ammo as fast as they can make it.

"I'm tired of reading the misinformation on the internet right now about us not trying to service the demand that we're experiencing," he said in a YouTube video produced for customers aimed at quashing speculation suggesting otherwise.

Imports of ammunition from Russia, South Korea, the European Union and others were up 225% over the past two years, according to an analysis by Panjiva Inc., which independently tracks global trade. 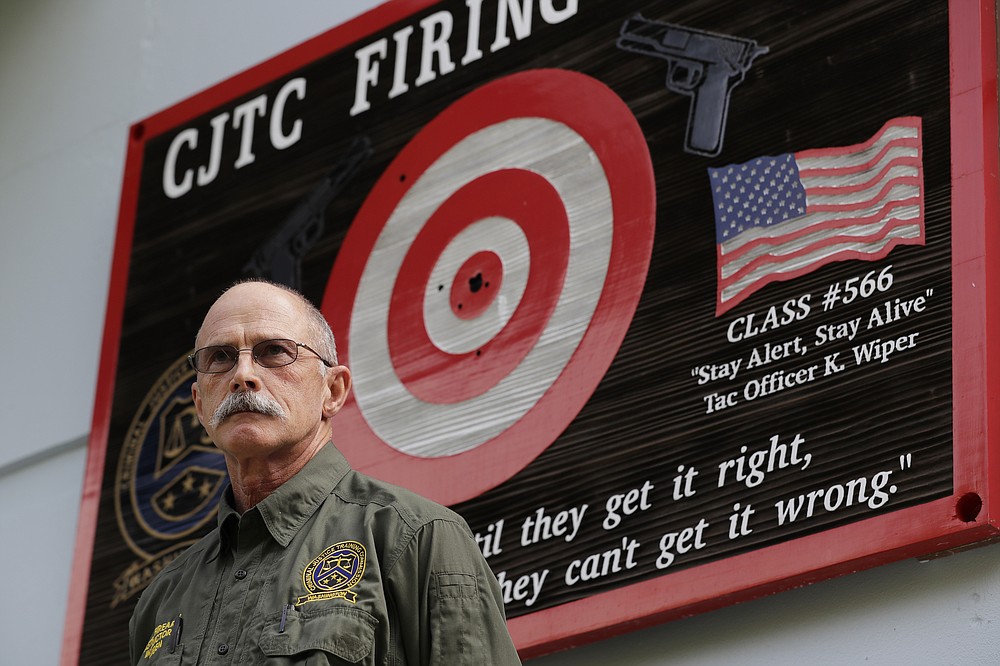 FILE - In this July 16, 2019, file photo, Doug Tangen, a firearms instructor at the Washington State Criminal Justice Training Commission, poses for a photo near a sign outside a firing range used in the state's Basic Law Enforcement Academy in Burien, Wash. Tangen says the facility has had trouble getting the supply of ammunition that they need for firearms training due to shortages blamed on the COVID-19 pandemic and record sales of firearms. (AP Photo/Ted S. Warren, File) 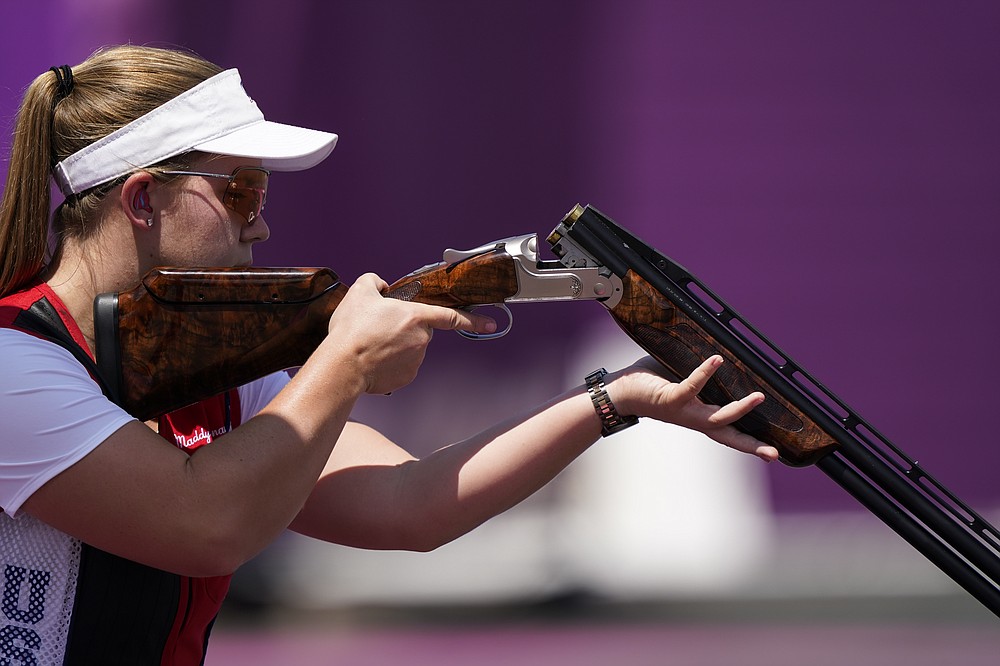 FILE - In this Thursday, July 22, 2021, file photo, Madelynn Ann Bernau, of the United States, practices at the Asaka Shooting Range ahead of the 2020 Summer Olympics, in Tokyo, Japan. The COVID-19 pandemic coupled with record sales of firearms have created a shortage of ammunition in the United States that has impacting competition and recreational shooters, hunters, people seeking personal protection and law enforcement agencies. (AP Photo/Alex Brandon, File) 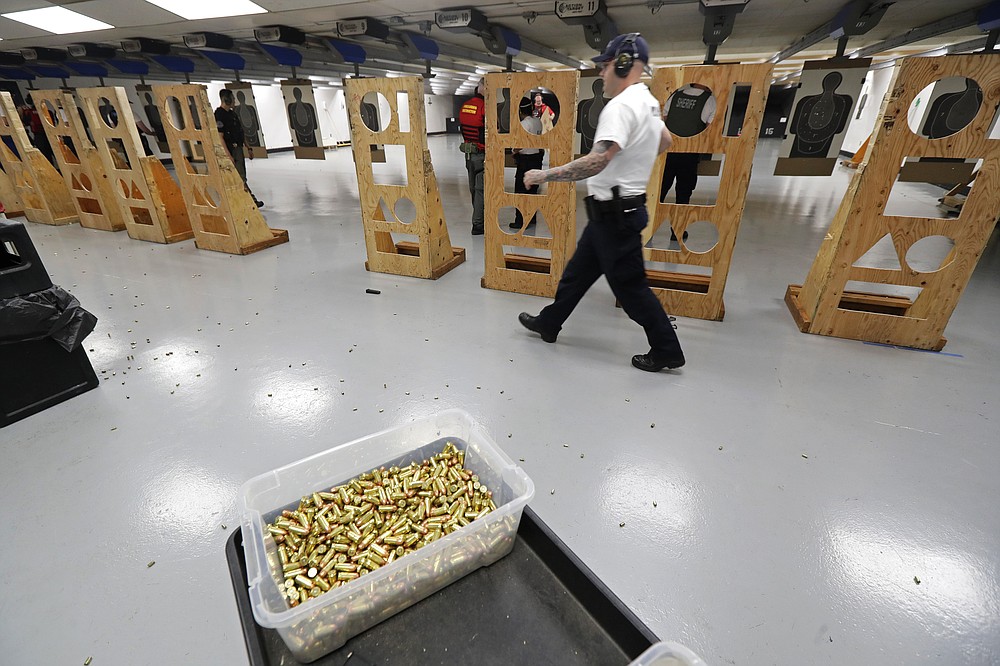 FILE - In this July 16, 2019, file photo, an officer taking part in training walks near a box of ammunition at the Washington State Criminal Justice Training Commission in Burien, Wash. The COVID-19 pandemic coupled with record sales of firearms have created a shortage of ammunition in the United States that has impacting competition and recreational shooters, hunters, people seeking personal protection and law enforcement agencies. (AP Photo/Ted S. Warren, File) 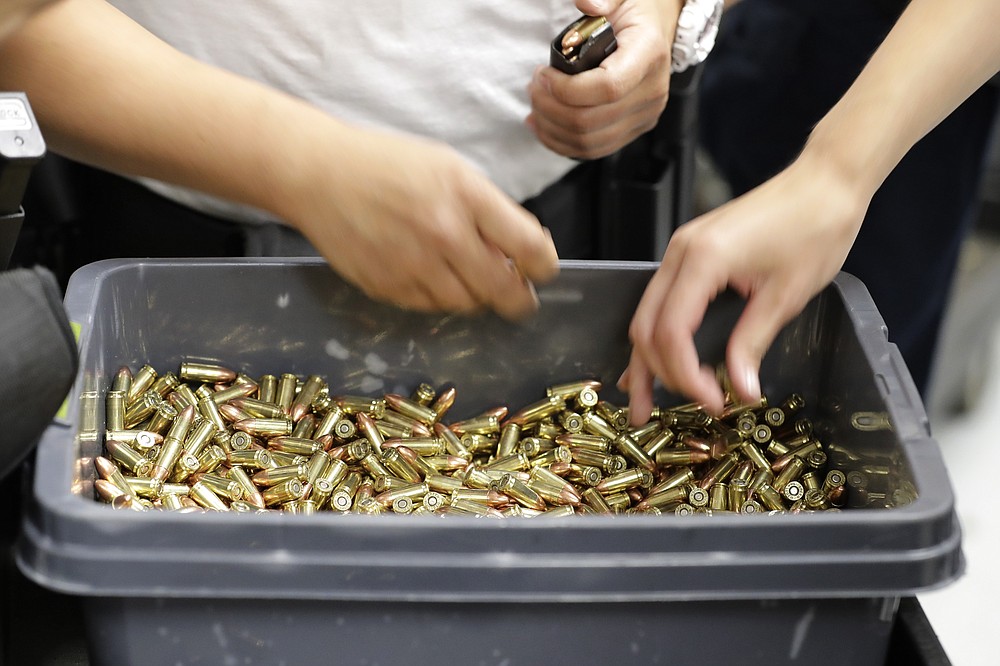