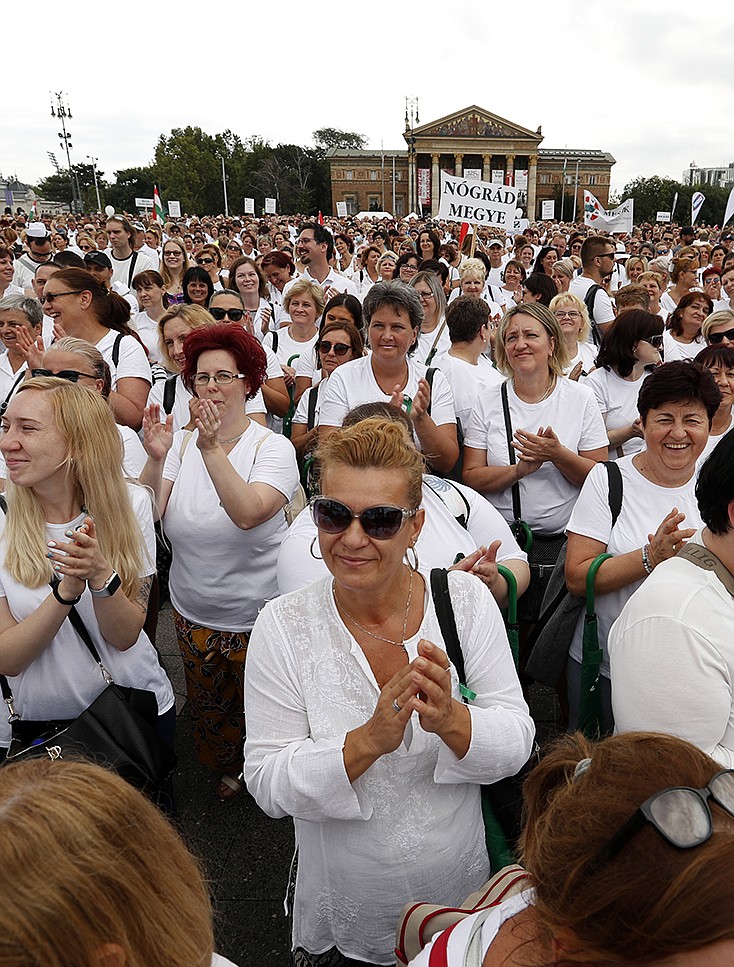 Several thousand healthcare workers and supporters protest to demand wage increases and better working conditions in Budapest, Hungary, Saturday, July 31, 2021. The protesters, including supporters from many other Hungarian trade unions, have said the COVID-19 pandemic had only worsened their situation while their pay had remained low. (AP Photo/Laszlo Balogh)

The crowd, which included supporters from several of Hungary's largest trade unions, said the covid-19 pandemic only had worsened the already precarious situation of health care workers while their demands for pay increases and reduced working hours had gone unheeded by the government.

"The past period has been very difficult for us. The covid pandemic has turned our lives upside down," said Kata Gornicsak, who has worked as a chief nurse for 26 years at a hospital in Budapest. "The reason we are here is not because of hope but desperation. We want respect, which we are not getting at all."

The Hungarian Chamber of Health Care Professionals, which called for the demonstration, said the government had not consulted with them before passing an overhaul of the health care system in March that increased wages for doctors but not for many others working in hospitals, like nurses and orderlies.

"The doctors earn very well, while the nurses who are feeding and dressing the patients while working double shifts, including nights, aren't paid well at all," said Marika Bognar, a nurse who traveled to the demonstration from Bacs-Kiskun county in southern Hungary.

Hungary's health care system has struggled to cope with the strain of the coronavirus pandemic, which ravaged the country in the fall and winter, giving it one of the highest per-capita death rates in the world.

A government decree in November, issued as part of Hungary's pandemic state of emergency, stripped health care professionals of their rights to resign in an effort to prevent an outflow of overburdened doctors and nurses.

While the new agreement on wages and benefits was signed by some 95% of those working in Hungary's public health care sector, as many as 5,000 refused to sign the new required contracts.

A survey released in June by the Independent Health Care Union found that nearly half of health care professionals in Hungary planned either to leave the sector or retire as soon as legal conditions allow it.

Gornicsak, the Budapest nurse, said that while some workers had received increased benefits, they were not enough to offset poor pay and intense demands arising from the pandemic.

"Most of us received 10 extra vacation days, which we are very happy with, but we probably won't be able to use them because we constantly have to work," she said.

In attendance at the protest was Budapest's liberal mayor, Gergely Karacsony, who plans to run against Hungary's right-wing Prime Minister Viktor Orban in closely watched elections next spring.

Karacsony told The Associated Press that Hungary's health care system needs increased funding, and that "putting [it] back on its feet must be one of the most important tasks of the next government."

"The government should not be in a state of war with health care workers, but should jointly develop a system of wages and conditions which can keep health care professionals and doctors in the system," Karacsony said.