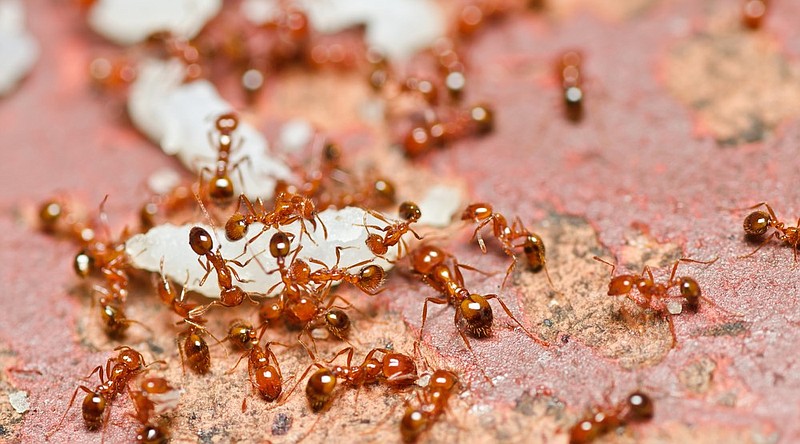 Fire ants are shown in this undated courtesy photo.

Invasive fire ants have infested four more Arkansas counties, prompting the U.S. Department of Agriculture this summer to expand the federal quarantine area in the state.

State officials nominated the counties — Logan, Prairie, Sebastian and White — about two years ago after surveys conducted by state regulators revealed the six-legged problem, said Paul Shell, a plant inspection and quarantine program manager with the Arkansas Department of Agriculture. The USDA announced the expansion in June.

With these additions, 43 counties in the southern and central portions of the Natural State are now subject to a federal quarantine intended to limit the spread of fire ants. Agricultural products like grass sod, hay and nursery stock in the counties under quarantine shouldn’t be shipped into nonquarantine areas without being certified as free of fire ants.

“The quarantine is to prevent or at least slow the spread of fire ants into areas that don’t have them. It regulates some items that are potential spreaders,” Shell said. “The ants on their own can fly short distances, but the main way they’ve spread in the Southern U.S. is by human assistance.” Arkansas wasn’t the only state in which a quarantine was expanded. Three counties were added in North Carolina, one in Oklahoma and five in Virginia.

Red imported fire ants arrived from South America in the 1930s. Fire ants were first reported in Arkansas in 1958. Today, imported fire ants infest more than 366 million acres in Puerto Rico and 14 states with counties under the quarantine imposed by the USDA’s Animal and Plant Health Inspection Service.

Fire ants have a painful sting and can aggressively swarm people or livestock that disturb their nests. They feed on the buds and fruits of several crops, including corn and soybeans.

“Fire ants can short out electrical equipment and that can lead to issues with homeowner’s air-condition to a chicken house with fans,” said Kelly Loftin, an entomologist with the University of Arkansas System’s Agriculture Division.

This public nuisance and serious agricultural pest causes about $6.7 billion in damage annually to homeowners, agriculture, and natural ecosystems within the federal quarantine area, according to the Ant Pests Community led by the National Institute of Food and Agriculture’s Extension Service.

Congress appropriates about $1.6 million annually for inspection service to conduct the Federal Imported Fire Ant program, according to the USDA.

Additionally, the state Plant Board has civil penalty authority, though no fines have been issued for fire-ant violations, Shell said.

The department conducts annual inspections of all license holders, including businesses outside the quarantine that may have received regulated items.

“We work with businesses that are dealing with fire ants,” Shell said. “We work with them to set up compliance agreements. When we set up a compliance agreement with a company, this lists ways they can move the regulated article without moving fire ants along for the ride.” For example, an insecticide usually needs to be applied to nursery stock to kill fire ants and keep them from moving back in, at least for a while, Shell said. Hay and straw should be stored off the ground.

The agreement lists approved chemicals, proper storage practices and other standards companies in the quarantine need to follow if moving their products outside the zone.

Shell said regulators are working on getting the word out to businesses in the newly added counties.

A little under 100 Arkansas nurseries and sod, hay and straw farms inside the quarantine area have signed compliance agreements, he said. Most of these businesses distribute locally, he said, and therefore, it’s not applicable.

“I would like to stress to the regular public, consumers, about not moving [regulated items] from the quarantine to outside the quarantine. It’s not just businesses that are at risk,” Shell said. “This goes beyond fire ants. These invasive species spread from regular folks moving things from one area to another … like moving firewood or visiting somewhere far away and bringing back plants or seeds. There could be unintended consequences.”

Once fire ants hitched a ride to the United States, their population boomed. There are no natural checks and balances in their new environment, no predators or diseases that affect them significantly, Shell said.

Experts thought this year’s intense winter would keep fire ants at bay, but that hasn’t been the case, Loftin said.

Overall, the northward migration of fire ants has slowed, compared with the past rate of spread. The critters are starting to reach colder conditions outside their livable range, he said. Though, Loftin suggested they may eventually reach southern Missouri.

Fire ants can form colonies close to homes and other buildings, and they sometimes forage indoors for food and moisture, especially during hot, dry summer months.

Loftin has spent years studying methods for managing these pests and teaching people how to protect themselves and their land from the invasive species. He said some of the easiest applications for prevention are fire-ant specific baits applied around twice a year.

“You have to be persistent,” he said.

From 2002-2018, Loftin worked on applied research for fire-ant quarantine treatments by introducing phorid flies. They also come from South America and prey only on the fire ants, he said. While the work has stopped, two species of the flies have established and work as a management technique.

“The real impact is on what it does in terms of ant behavior,” he said. “The fly only parasitizes the worker ants.”