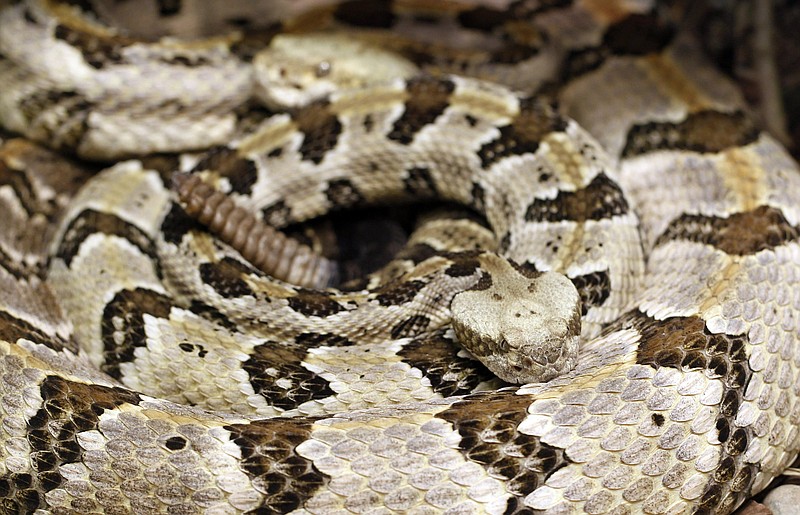 Many snakes species are native to Arkansas. They help control rodent numbers, and they are interesting to study from a safe distance.

Arkansans are most likely to see or encounter snakes during their mating season in the summer and early fall. Male snakes travel as far as necessary to find mates, and they also hunt in warm weather.

Because of their menacing reputation and unpredictability, venomous snakes are the most interesting. Venomous species in Arkansas include the western diamondback rattlesnake, the timber rattlesnake (or canebrake rattlesnake), the western pygmy rattlesnake, the cottonmouth, the copperhead and the coral snake. Except for the coral snake, Arkansas' venomous snakes are pit vipers, with heat-sensing depressions, or pits, atop their wide, spearpoint-shaped heads. They are matte colored, and their pupils are elliptical.

The coral snake is long, slender and glossy. Its head is the same width as its body, and its pupils are round.

The largest venomous snake in Arkansas, the western diamondback is also our rarest venomous snake. It inhabits rocky, forested areas in the Ouachita Mountains and in the southwestern portion of the Ozarks. Distinguishable by the dramatic, dark diamond patterns down its back, it prefers sun-drenched south- and west-facing slopes. Temperatures are highest in these habitats, which is important for egg development.

In 1997, I accompanied Betty Crump, a U.S. Forest Service wildlife biologist in the Caddo District, on a project to attach a radio transmitter to a mature western diamondback. Afterward, we released it at Sharptop Mountain Wildlife Management Area. Crump said that diamondbacks existed precariously in Arkansas, largely because they rarely survive contact with humans. They can be aggressive, and unlike timber rattlesnakes, tend to hold their ground when threatened. People kill them whenever they see them, and their tenacity tends to aggravate violent human responses.

According to "Herps of Arkansas," this is still a major concern for what it characterizes as a "small and dwindling" population.

Found statewide, the timber rattler features a tan body crossed with distinctive dark brown bands within light borders. It is a beautiful snake and usually not aggressive unless threatened.

Though associated with rocky areas, you can encounter a timber rattlesnake almost anywhere, especially in brushy areas and in field/forest transition habitats. Like diamondback rattlers, the timber rattlesnake prefers south- and west-facing slopes.

A timber rattlesnake's coloration blends perfectly with the forest. When hunting, it coils very low to the ground and buries itself to varying degrees with leaves, pine needles and other forest litter, often against tree bases, fallen trees and alongside game trails where rodents travel. This makes them virtually invisible, and since a timber rattlesnake does not rattle readily, a person can tread very close to one unawares.

Unfortunately, this also increases the possibility of stepping on a timber rattler or stepping close enough to it to provoke a strike in defense. For sportsmen, this is most likely to happen in August and September, when bowhunters are scouting or looking for places to hang hunting stands. Wearing high, snakebite resistant boots will significantly reduce the chance of a bite below the knee in the event of such an encounter.

Often brilliantly colored, the copperhead is found statewide in Arkansas, especially in woodlands, woodpiles, brushy areas and abandoned structures. It loves to eat mice, and copperheads seek them in chicken coops and even dog kennels where food spillage is common. They are also frequently seen in streams, often in the water. Copperheads also love to eat cicadas and ascend trees at night when a large cicada hatch emerges.

The copperhead has a light body marked with dark, coppery bands along the back. Adult copperheads are 24 inches to 36 inches long.

Outdoors enthusiasts often see copperheads in the summer and early fall. Their coloration blends seamlessly with the forest floor, so you are unlikely to see it unless it moves. Copperhead bites often occur on the hand, when a victim reaches into a woodpile or other confined area. One of the most unusual bites occurred from a juvenile copperhead coiled beneath a bicycle seat. Attempting to move the bike, the victim grasped the underside of the seat and was bitten on a finger.

My most memorable copperhead encounter was at Bard Spring Recreation Area in Pike County while sitting along the creek bank. Sensing a presence, I looked to my right and noticed a large copperhead coiled in the grass about 4 feet to my left. A closer look revealed about a dozen more. I rose calmly and led my children to a less infested spot.

Common throughout Arkansas, the cottonmouth -- or water moccasin -- associates closely with water. I have encountered it on every river and stream I have ever visited, often in streamside bushes overhanging the water.

The cottonmouth has a thick body with a dull, dark color. Its markings are subtle and muted. It is very territorial and often stands its ground by coiling and exposing its white mouth interior. Unlike other snakes, it often approaches an interloper. When aroused or threatened, it often emits a malodorous musk.

Cottonmouths eat a variety of terrestrial and aquatic prey. I have seen them catch and eat fish. They swim atop the water and, contrary to myth, can strike underwater.

Water snakes and black rat snakes are often mistaken for cottonmouths, much to their detriment.

Except for a large portion of the Mississippi Alluvial Plain, the pygmy rattlesnake is found statewide in varying densities. Adults are 15 inches to 20 inches long, and their coloration is similar to the timber rattler.

Like other rattlesnakes, they ambush mice, lizards and other small prey by coiling at tree bases and in brushy areas near field/forest transitions. When aroused or threatened, they vibrate their tail, emitting a faint buzz from a small rattle. It is much quieter and more high-pitched than the warning of a timber rattler or diamondback rattler.

Because its fangs and small size prohibit it from striking above the knee, a pygmy rattlesnake is easily deterred by snake boots in the event of an encounter.

Inhabiting piney woods in southwest Arkansas, this secretive snake is seldom seen and rarely encountered. Unlike other venomous snakes in Arkansas, the coral snake has a neurotoxic venom. Pit vipers have hemotoxic venom. It envenomates prey by chewing, like the cobra or mamba. Pit vipers envenomate by striking.

Almost all snake encounters occur because a human has encroached into a snake's territory. If allowed, a snake will disengage from an encounter peacefully and seek refuge in a protected place. Rarely is killing a snake justified in the wild, so live and let live.