Hidden gem no more: Wildwood Park for the Arts turns 30, flourishes during pandemic 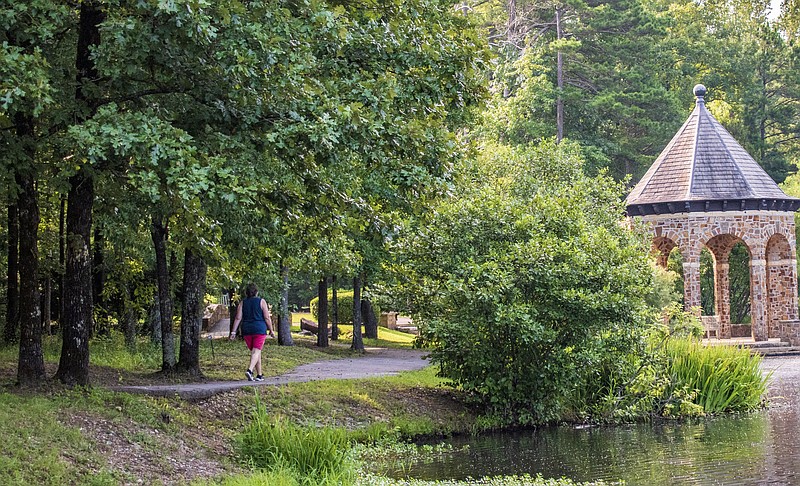 A walker takes advantage of the trails at Wildwood Park for the Arts in Little Rock. The natural progression of Little Rock out west — with big-box retailer Costco and new neighborhoods settling nearby — is likely to continue to bolster the chances that more people walk through the gates of the park, which has flourished in the age of covid. (Arkansas Democrat-Gazette/Cary Jenkins)

Even in the best of times, an organization dedicated to the arts is a risky proposition.

Of course nobody would consider the last year and a half the best of times. Far from it.

The pandemic has so completely and thoroughly lashed performing arts venues — with audiences out the exits, one might feel the need to go institution by institution knocking on doors and asking, "Everybody OK in here?"

This seems especially true for an organization such as Wildwood Park for the Arts.

Wildwood, founded in 1991, has been an intriguing piece in Central Arkansas' arts puzzle. The organization started out as a home dedicated primarily to opera and then later as a venue for outdoor festivals. The Arkansas Repertory Theatre, the Arkansas Symphony Orchestra and other groups would occasionally travel out west to put on a concert or stage a play in Wildwood's 625-seat Lucy Lockett Cabe Festival Theatre.

Being in west Little Rock has made Wildwood stand out from the majority of performing arts venues parked in downtown Little Rock or North Little Rock. Wildwood's theater and other small indoor performing spaces might not even be considered the main attraction. With the main structure occupying only a small portion of Wildwood's woody, 105-acre footprint, you could say the park is more for the nature lover than the performing-arts fan. A 10-acre Butler Arboretum, designed by noted landscape and garden designer P. Allen Smith; a water garden; designed hiking trails and a small lake are only some of Wildwood's outdoor highlights.

Bevan Keating, executive director of Wildwood for the past three years, says that his institution never completely closed during the pandemic. He is convinced Wildwood will come out of the covid crisis in a stronger position.

The quarantining during the pandemic has, according to Keating, "allowed arts programs to hit the reset button and see what the community wants."

For Keating, the message was very clear.

"What was the one thing we were allowed to do during the covid crisis? We were encouraged to go for a walk, to get outside. Before covid, Wildwood would open our gates to the grounds at 9 a.m. and close them at 5 p.m. For families that get off work at 5 and then have to pick up kids, it does not work. We changed the hours."

Now Wildwood, which is open to the public free of charge seven days a week, doesn't close until sunset. Wildwood also used its striking outdoor setting as a backdrop for outdoor concerts. Trumpet wiz and bandleader Rodney Block performed a sold-out concert at Wildwood in June.

"We created a new series — Music in the Wild," Keating says. "We had three concerts in the spring and all of them sold out. We learned that the appeal wasn't just the musicians, but the location. When the sun set during the concert, I had lights in the trees that would light up." 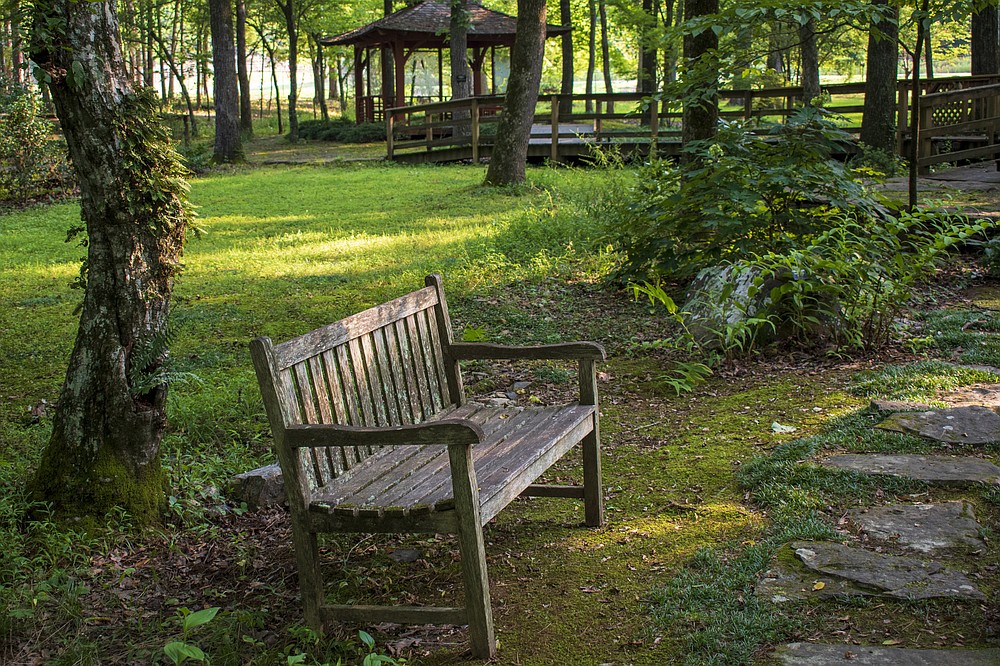 A bench offers rest to visitors in the Asian Woodland Garden at Wildwood Park for the Arts. (Arkansas Democrat-Gazette/Cary Jenkins)

Ann Chotard founded the Arkansas Opera Theatre in 1973. Chotard's company performed at Hall High School and the Arkansas Arts Center before moving to a permanent home — what would later be called Wildwood — on 105 acres donated by Deltic Timber on Denny Road, 13 miles west of downtown Little Rock.

In 2007, an article in the Democrat-Gazette noted that Wildwood's "facility was a realization of Chotard's longtime dream to establish a summer music festival in the woods, like Wolf Trap in Virginia, Tanglewood in Massachusetts or Aspen in Colorado, that would also show off the natural beauty of her home state of Arkansas."

When Wildwood was brand-new in the 1990s, it might have been only 13 miles from downtown, but it felt a lot farther away. West Little Rock was only beginning to spread out and cover the landscape with strip malls, big-box stores and condo complexes.

Nevertheless, in her time at the helm of Wildwood, Chotard was able to pull in artists from out of state together with local performers to appear in little-seen operas such as "The Marriage of Figaro." Famed Arkansans Maya Angelo and Johnny Cash made audience-pleasing appearances at Wildwood during Chotard's tenure. In 1998, Chotard reported that 81,000 people had gone through the gates at Wildwood to attend a festival, see artwork in Wildwood's gallery or just walk around the grounds.

Keating's first experience with Wildwood was as one of those visiting artists. In his case, he was "in the pit. I conducted a few operas for them. They kept coming back to me."

In the early 2000s Wildwood's appeal to audiences was waning and, when Chotard abruptly resigned as director in 2007, the west Little Rock park looked as if it might not survive the financial crunch it had endured for several years. Instead of folding its tent, Wildwood made a big change, hiring Arkansas Repertory Theatre founder Cliff Baker as executive director and chief executive officer.

"I always loved the concept of Wildwood," says Bob Hupp, the former Arkansas Rep artistic director who's now running the Syracuse Stage in Syracuse, N.Y. "I thought Wildwood was ahead of its time. It was out west before Little Rock really started growing that way."

Hupp, who took over the Rep from Baker in 1999, was eager for his downtown theater company to join in partnerships with other arts groups. With Baker being at Wildwood and still having a good relationship with his old theater company, it made the pairing of the two arts groups a natural. 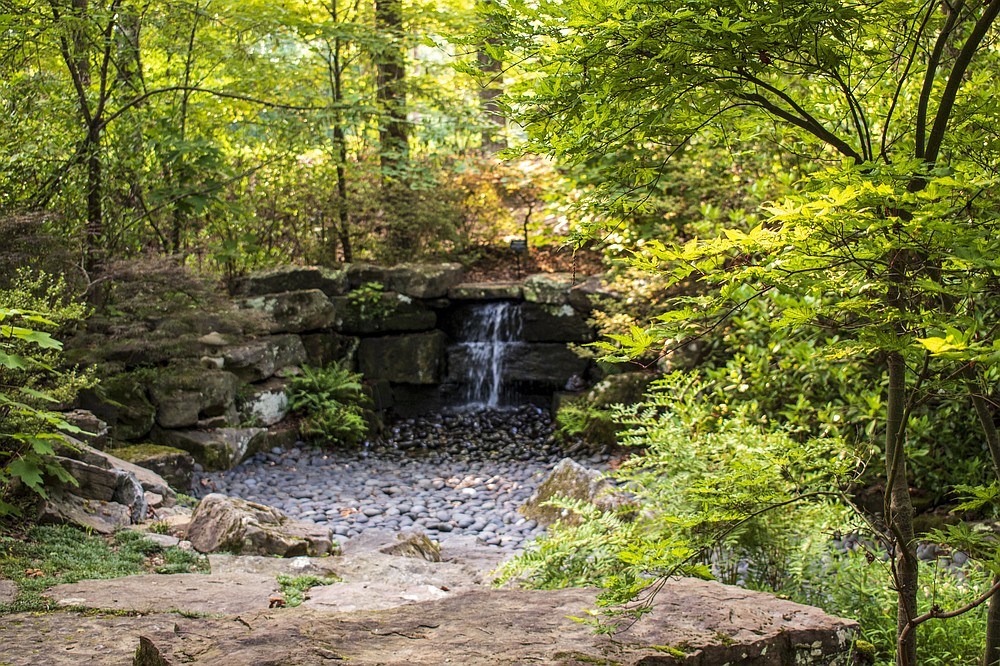 The Nabucco Waterfall can be found in the Asian Woodland Garden at Wildwood Park. (Arkansas Democrat-Gazette/Cary Jenkins)

Wildwood's Swan Lake was incorporated into Hupp's concept for his Shakespeare shows.

"I still hear from the actors who had to paddle in a canoe across the lake in the show," Hupp says. "We also had an actor swim across the lake. For the finale of 'The Tempest,' we planted underwater pumps to have water spouts shooting out of the lake."

Melissa Thoma, principal of marketing firm Thoma Thoma, has a unique and extensive history with Wildwood. She started out singing opera for Ann Chotard.

"I performed my first show [at Wildwood] when my daughter was 5 or 6 years old," Thoma recalls. "My daughter is now 33. I was singing at Wildwood with the Arkansas Opera Theatre and this was before the Lucy Cabe Theatre was built. There was just this metal shell where we performed."

Since those first years working with Chotard at Wildwood, Thoma has served on the park's board, including a few terms as president. She watched as Wildwood changed hands, but has remained a steadfast champion, helping raise money to keep the park open and awareness to keep audiences coming.

"I think Central Arkansas has been gifted with the unique and extremely attractive venue for enjoyment of arts and nature. Wildwood is still evolving to meet the needs of west Little Rock. There isn't a lot of park space out west. Wildwood is this phenomenal, wonderful environment. The magic of Wildwood can be seen in those acres donated by Deltic Timber so many years ago and in the summer arts camps for children that continue to go on." 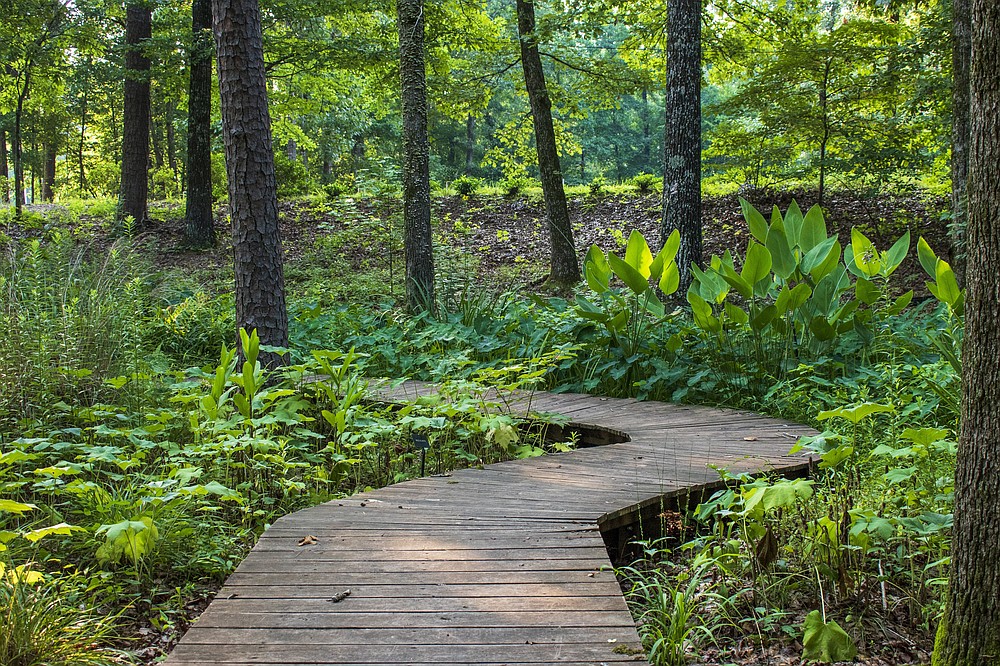 A path through the Asian Woodland Garden at Wildwood Park invites visitors to a leisurely stroll. (Arkansas Democrat-Gazette/Cary Jenkins)

As leader of Wildwood from 2007 to 2013, Baker turned the emphasis of the park from opera to seasonal festivals — Harvest!, Lanterns! and others — that made more use of the sylvan setting. Over the years Wildwood has also developed and maintained a popular summer education program with the Wildwood Academy of Music and the Arts, a camp for students ages 6 to 18.

Keating recognizes that Baker and Leslie Golden, who took over after Baker left in 2013, "broadened the horizons" of Wildwood. "[The] Lanterns! festival is still one of our most popular events and it's not going anywhere," he says.

"I was tasked with turning the ship around," he says. He also believes that when he took over Wildwood it "was still trying to find its place in the community. I am a square, I admit it. I love opera, but there are only so many opera fans in the state."

Oddly enough, the covid lockdown put a premium on what Wildwood offers in abundance — the outdoors. Wildwood officials found themselves fielding numerous requests for outdoor weddings, memorial services and corporate retreats. Being a host in this way helped the park's financial bottom line.

"We have been booked solid," Keating says. "We were able to meet this need during the time of covid. It helped us. It was a win-win. We have weddings on the books way into 2023."

Keating also notes that "a lot of different performance groups were looking for a space." Wildwood was able to rent out its main stage space — the 625-seat, thrust-stage theater — to those looking to put on a show.

"We had four different dance studios do recitals out here," he says.

Before Keating took the reins, Wildwood had been the frequent home for productions of Preclara, a performing arts company that he had co-founded. Preclara's mission statement says the company "specializes in combining many artistic genres — including choral, orchestral, operatic, and dance performances — to present unusual takes on popular artistic masterworks." In October 2016, Preclara staged "The Music Man" with the Arkansas Festival Ballet at Wildwood's Cabe Theatre.

So it's probably no surprise that Keating is continuing the collaborative events at Wildwood. One big event on the park's calendar is a November production of "The Sound of Music," which will be a paired show with North Little Rock's Argenta Community Theater. The Rodgers and Hammerstein musical will be staged at Argenta's theater and then at the Cabe Theatre at Wildwood. 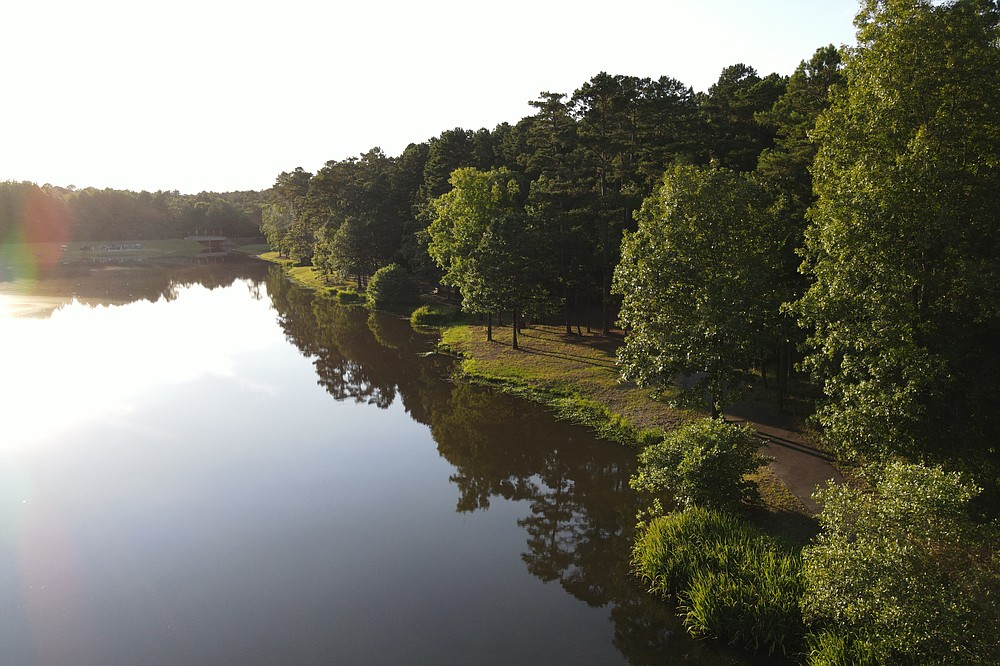 OUT OF THE WOODS

The natural progression of Little Rock out west is likely to continue to bolster the chances that more people walk through the gates at Wildwood. The much-anticipated retail chain Costco, which opened its doors July 21, is less than three miles from the park. Where Wildwood was once almost the lone address on Denny Road, neighborhoods have been built and are occupied.

To that end, Keating has hopes to gather up the money to build a new, more visible entrance to Wildwood to replace the chain-link fence that now exists. He sees Wildwood fashioning itself as a "cultural and nature center for west Little Rock."