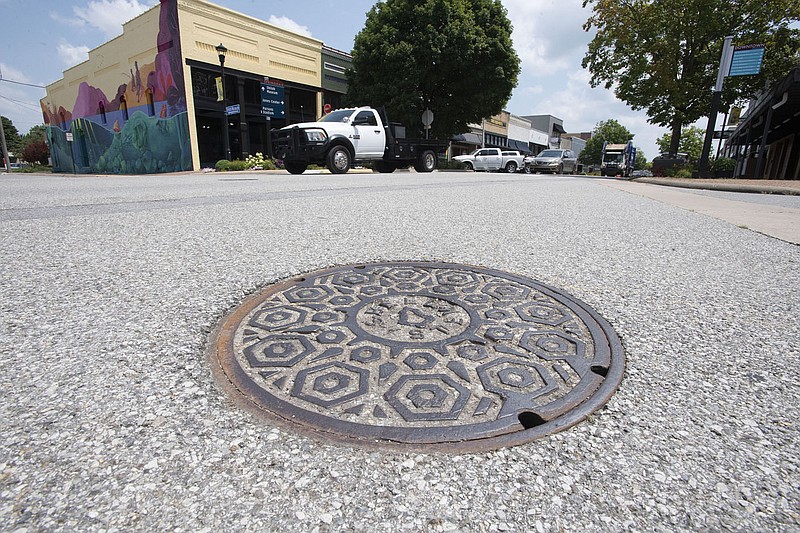 SPRINGDALE -- The city is full of holes, and Springdale Water Utilities is set to fill 14 of them.

Manholes lie flat with the surface of the street when installed, said Rick Pulvirenti, chief operating officer of the city's water utility.

But every time a new asphalt surface is laid on the street, the roadbed rises a few inches, leaving the manhole in a divot. Cars and trucks passing over a divot can wallow it out until drivers feel a jostle or even a jar when tires hit the hole.

The Springdale utility's crews simply will fill the divots with asphalt and smooth them even with the surface of the roads, Pulvirenti said. The patches of filled asphalt keep the manholes easy to find for maintenance crews.

The utility's engineers considered hiring a road construction contractor to fill the holes.

Fixing the worst one -- and just the one -- on South Thompson Street in front of the Zips Car Wash, was estimated at $18,400, Pulvirenti said. The Arkansas Department of Transportation reports 31,000 vehicles a day drive by that manhole just south of the intersection with Sunset Avenue.

The estimate is $53,887 to fix all 14 manholes. The Corgil Construction Co. prepared the estimate. The utility has had an annual contract with the company to fix the manholes, but utility staff determined it was too expensive.

To fill each manhole will require three visits by the construction crew and three instances of closing the road, Pulvirenti said. The Water and Sewer Commission decided Wednesday that for 30 minutes of work and a few hundred dollars, the utility staff could fill the holes with asphalt a few times a year.

The commission makes decisions about water and sewer service in the city and oversees the work of Springdale Water Utilities.

Pulvirenti explained that because these 14 manholes are on state highways, rather than city streets, the Arkansas Department of Transportation has left the utilities responsible for their own equipment.

A manhole is an entry point for a person or equipment to access the pipes, electrical lines and other infrastructure supporting the city, explained Pulvirenti, who also serves as the Water Department's chief engineer.

The streets and sidewalks hold various kinds of manholes or "man ways," he said. Many go unnoticed until they become a problem.

"Once you hit it, you don't want to hit it again," the wife of a commission member said of the South Thompson manhole.

An iron manhole cover cast with a fish means the manhole leads to pipes that carry storm water away from streets and structures, said Brad Baldwin, director of the city's Engineering and Public Works departments.

The drainage system then relies on the streams and creeks of the region to empty the water into the Illinois River.

"If it has a fish on it, it says, 'Don't trash the place, it runs into a stream,'" Baldwin noted.

The manholes reading "Sanitary Sewer" require protective equipment to enter. These carry the wastewater of the city's estimated 90,000 residents -- and the city's businesses -- to the city's wastewater treatment plant.

The utility puts manholes at every place pipes change direction or change grade or every 400 feet, Pulvirenti said.

The water utility has 9,949 manholes throughout its coverage area.

The lines for various utility services often are built as the city builds major road projects, Pulvirenti said. But the utilities try to place the new manholes outside of the roads, to eliminate the need of shutting the streets to make repairs.

Pulvirenti noted Springdale utility crew members always don respirators before entering manholes. The sewers can contain volatile organic compounds like those found in fuel and cleaning solutions. And the natural breakdown of sewage forms methane gas, which can be explosive.

"If it takes protective equipment to go into a manhole, we call the Fire Department," Baldwin said of the city's system of pipes.

Pulvirenti said the heavy-duty manhole covers used on streets might run 6 to 8 inches in diameter and weigh 800 pounds.

The recent estimate for manhole repairs listed $1,800 as the cost of one manhole and the ring into which the manhole lid is placed.

Sanitary sewer manholes are shaped like a cone that expands underground to provide workspace for maintenance crews, Pulvirenti said.

Baldwin noted the manholes accessing the storm water drains are smaller and often square-shaped. These often lie near an inlet for a curb and gutter because the pipe is just beyond the curb line.

The men working on drainage sewers work in an underground box no smaller than 4 feet by 4 feet, Baldwin said.

"Storm drainage is pretty exciting when it happens, but pretty boring otherwise," he said.

The crews of an earlier civic project apparently put a wooden barrel into the ground as a manhole, said Wyman Morgan, the city's director of administration and finance. They poured concrete around the barrel rather than building a "form" to shape the wet concrete.

"That's the first time I'd ever heard of it," Morgan said. "And it seemed to make sense, rather than going to the trouble of building a form."