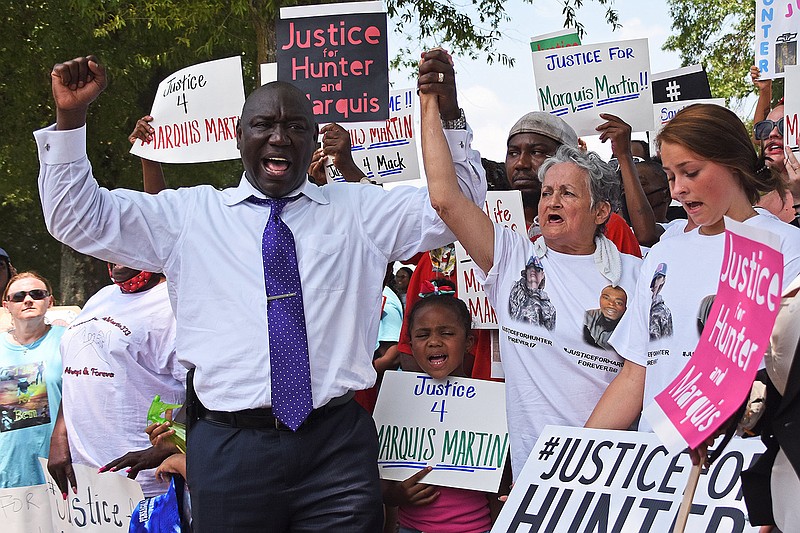 More than a month after a Lonoke County deputy shot and killed 17-year-old Hunter Brittain, officials have yet to release body camera footage amid a national conversation about police transparency.

Officials have repeatedly denied the release of body camera footage since the June 23 shooting, citing it as part of an ongoing investigation. Jeff Phillips, special prosecutor for the case, most recently denied a Freedom of Information Act request for the footage on July 19.

Brittain's family, along with the family's attorneys and civil rights advocates, continue their calls for transparency and the release of footage in that shooting that they say could have been avoided.

Noted civil rights attorneys Ben Crump and Devin Jacob were retained by Brittain's family in the days after the shooting as the case drew national attention. The attorneys also represented the family of George Floyd, 46, who died in 2020 while in police custody in Minneapolis. Officer Derek Chauvin was convicted of murder in Floyd's death.

The attorneys and the family have maintained that Brittain was shot three times by Lonoke County sheriff's office Sgt. Michael Davis after being pulled over while test-driving a vehicle about 3 a.m. on Arkansas 89 south of Cabot. The teen exited his truck to place a blue plastic bottle of antifreeze behind a wheel because the vehicle wouldn't shift into park, according to a previously released statement. Relatives have said Brittain was up late working on the vehicle's transmission before taking the test drive.

"What we believe is that transparency is the most important thing in this tragic killing of this unarmed 17-year-old child," Crump told the Arkansas-Democrat-Gazette. "Transparency will be able to reveal the truth to the public who is outraged that this unarmed child was killed by somebody who was supposed to protect and defend them."

As of Friday, Jacob said neither the family nor the attorneys have been given access to review the footage.

Davis was fired by Lonoke County Sheriff John Staley a week after the shooting for breaking a policy that requires that the body camera be turned on before deputies interact with the public. Details about when the camera was turned on and what the footage captured are unknown to the public.

Robert Newcomb, a Little Rock attorney who often represents fired police officers, has been retained by Davis. The attorney requested a grievance hearing from Lonoke County, but as of Friday the county had not decided whether to grant the hearing.

Newcomb says Brittain was pulled over by Davis because his vehicle was smoking heavily and the engine was knocking. He said Brittain turned into a parking lot, jumped out of the backward moving vehicle and reached into the back of the truck.

Newcomb said he does not support the decision to withhold the body camera footage from the legal teams, but there is a valid argument to whether it should be released to the public.

"Some say that body camera is a part of an investigation file and exempt from FOI [Freedom of Information Act release]," he said. "I can argue otherwise. That would be a legitimate argument."

Arkansas law doesn't provide clarity specifically to the release of body camera footage as it pertains to fatal officer-involved incidents.

As of 2018, at least 23 states and the District of Columbia had passed laws related to the public disclosure of body-worn camera footage, according to the National Conference of State Legislatures. Many states have considered similar legislation since.

Few states exempt police body camera footage from public records requests, but the majority have passed varying exemptions around the disclosure, such as who is allowed to see the video and in what time frame it must be released.

The Arkansas State Police, the investigating agency, and Lonoke County prosecutor Chuck Graham initially denied verbal requests for the body camera footage in the days after the shooting.

On July 14, the Arkansas State Police responded to a formal Freedom of Information Act request from the Democrat-Gazette for the footage and said the record is part of an "open and ongoing, undisclosed investigation by law enforcement." An email from the agency also stated that Graham had opposed release of the footage at that time.

Graham, who recused himself from the case July 8, denied the Freedom of Information request July 15. He stated that the investigation file, which originally was delivered to him, had been passed to the Arkansas Prosecutor Coordinating Office.

He previously told the Arkansas-Democrat Gazette on July 1 that the footage would likely be released by the special prosecutor once a prosecutor was appointed.

Jeff Phillips, 5th Judicial District prosecutor, was named the special prosecutor for the case July 12. He received the investigative file July 15, according to an email from the Arkansas Prosecutor Coordinating Office.

A Freedom of Information request for the footage was sent to Phillips on July 14. He denied the release of the footage on July 19.

"This case is still under investigation and part of the case is the information you are requesting," Phillips said in an email.

Phillips did not respond to a follow-up email sent Thursday by the Democrat-Gazette asking for additional details about why the footage has not been released along with possible timelines of when it could be.

It is legal for officials to deny body camera footage because of an ongoing criminal investigation, Robert Steinbuch, professor of law at the University of Arkansas at Little Rock William H. Bowen School of Law and co-author of the Arkansas Freedom of Information Act, said Thursday.

The body camera footage would be available once the case is closed or criminal charges are made, Steinbuch said.

There are instances in Arkansas of officer-involved fatal shooting video being released before the prosecutor's decision.

Video was not released until after the prosecutor's ruling in the case of Green Forest officer Francisco Pedraza, who fatally shot Maung Tway, 34, on June 5. An Arkansas-Democrat Gazette Freedom of Information request to state police was denied on the grounds that the case was still under investigation. The prosecutor released his opinion that the shooting was justified June 25 and released the video upon receiving a Freedom of Information request sent afterward.

A toolkit released in 2019 by the John Jay College of Criminal Justice in New York City recommends that prosecutors be as transparent as possible about the process. For example, it suggests possible timelines such as 10 days after an incident.

"There is no national standard," said Alissa Marque Heydari, deputy director for the Institute of Innovation in Prosecution at the college. "Every state and local jurisdiction is different in how they handle these cases, and that is all the reason why prosecutors offices need to be clear on what this process is. The public won't have trust and faith if they don't know how the decisions are made."

Marque Heydari said prosecutors could set guidelines, such as all witnesses must be interviewed in the investigation before release of the footage.

It's a nuanced issue, said Daniel Lawrence, research scientist with the nonprofit CNA Corporation's Center for Justice Research and Innovation. Privacy is a concern in some cases, depending on where the video is shot and who is in it. If there is a potential for criminal charges, there could be concerns the release of footage could bias a jury or lead to witnesses changing their statements, he said.

"All this being said, the purpose of body-worn cameras is to increase transparency and hold officers accountable when there's misbehavior," Lawrence said. "Community members in this day and age expect that footage to come out rather quickly. ... The benefit of releasing footage far outweighs the negative effects of holding onto that footage."

Lawrence said it could be helpful for states to have laws on the release of police footage. However, that is challenging because of the complexity in each event. One blanket statement won't cover it, Lawrence said.

In 2015, Oklahoma passed a law that, in part, stated that body camera videos should be publicly released if they depict use of force by police. It also enables footage to be redacted if it depicts a person's death, unless it was caused by police.

Tennessee's 2017 law provides that law enforcement body-camera videos of specifically named situations be treated as confidential, such as videos taken of minors at school.

But states like Louisiana have more vague language around the "expectation of privacy," which gives too much power to authorities to withhold footage, said Mary Fan, a law professor at the University of Washington who has studied body-camera policies across the nation.

"On the one end of the pendulum, there are the states that actually make it tough to get body camera videos explicitly," she said. "On the other end -- and this is more recent, after all these controversies and protests over use of force -- you see a more recent wave of states going the opposite direction and actually mandating faster disclosure."

States like California, Connecticut and Colorado have passed legislation that body-worn camera video of certain incidents be publicly disclosed within a specific time frame, which can range from a few days to more than a month after the incident.

Fan said the answer to this issue is not something for an expert to decide; it's something for communities to decide. What the public wants will look different across the county and should be democratically decided.

"We hunger for additional evidence in these contested encounters," Fan said, but "even having the video is not going to lead to one conclusion that everybody shares. People will see the same video and draw different conclusions. It's even more aggravated when it's partial video. ... People will bring their preconceived notions to interpreting what they see."

Steinbuch is in support of a law that would provide more guidance on body camera footage specifically.

"I do think it would be useful to have legislation that gives the public easier access to body camera footage," he said.

He suggested a law that would require law enforcement agencies to affirmatively post videos of events.

James Golden, a professor of criminal justice at the UALR School of Criminal Justice and Criminology, said it is important to protect criminal investigations by not releasing the footage until after it is complete.

"It really needs to be kept until the prosecutor determines if it is appropriate for release," Golden said. "That is why we have a prosecutor. They are the one who is going to make that determination."

Regardless of what happens in the public eye, there should be a standard to at least release footage to relatives and attorneys involved in the case, said Kwami Abdul-Bey, legislative/political action chairman for the Jacksonville branch of the NAACP.

The release of body camera footage can help build public trust, he said.

"It goes back to the narrative that law enforcement is a good-old-boy system, and they will do whatever they can to protect their own, and what is needed is transparency," Abdul-Bey said.

Crump said the proposed Hunter's Law would require that all body cameras be active when law enforcement officers interact with the public, and that resulting videos be released immediately to the public.

Jacob echoed that most jurisdictions in the nation would make such information available, and that it is important that government bodies disclose the truth to the public.

"As the old saying goes, trust but verify," Jacob said. "How can we trust if he [the prosecutor] won't give us an opportunity to verify?"