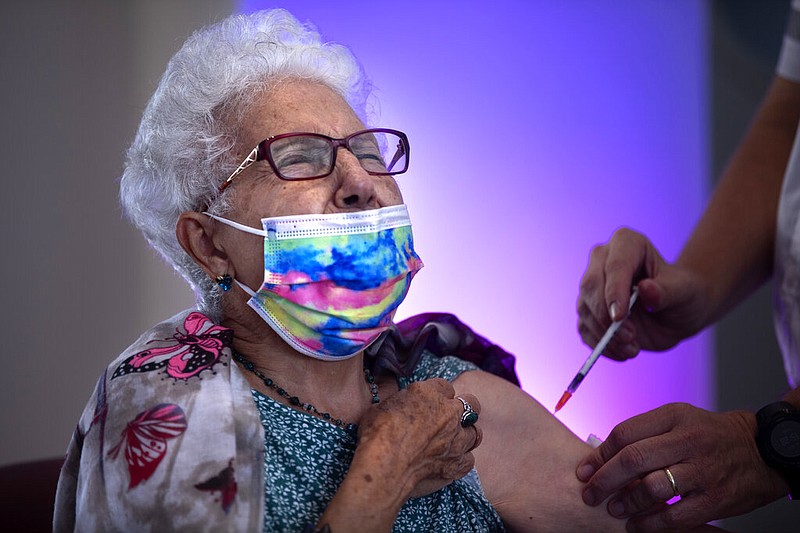 Data from 10 states shows that more than 1 million doses have gone to waste since the nation began administering covid-19 vaccines in December.

Much of the loss has come as demand for inoculations plummeted, with the daily rate of vaccinations now at less than one-fifth of its peak average of 3.4 million shots reached in mid-April.

[Video not showing up above? Click here to watch » arkansasonline.com/82fauciabc/]

Reasons for vaccine wastage include breakage, storage and transportation problems, expiration and shots that were prepared but not used after people did not show up for appointments, officials said.

In Arkansas, where just 36% of residents are fully vaccinated, nearly 55,000 doses had gone to waste by mid-July, up from about 580 in mid-March, as officials prioritized vaccinations over saving doses. "If we have the opportunity to give the vaccine, let's go ahead and do it," said Robert Ator, a retired National Guard colonel who runs the state's vaccination effort.

The Democrat-Gazette reported Saturday that 91,000 doses of the Pfizer vaccine were set to expire over this past weekend, according to the state Health Department. John Vinson, CEO of the Arkansas Pharmacists Association, said the doses represented about half the state's inventory of that shot.

"I'm not surprised there's this many expiring, but I have been surprised at how strong the need is for building vaccine confidence and distrust of the vaccine in the mid-South," Vinson said. "That's definitely been a formidable challenge."

Ator said he stopped ordering additional doses in April as demand dropped, and he has since shifted to repackaging doses in smaller quantities for distribution to drugstores and doctors' offices. The state's stockpile has decreased from 550,000 doses in April to about 350,000 in late July, he said.

In many states, data shows that wasted or unusable doses are no more than 2% of those received from the federal government and successfully administered.

In Georgia, more than 8.5 million doses have been administered; the state's unused doses total just 1.4% of that number, officials said. Idaho has wasted about 2% of delivered doses, and New Jersey less than half of 1%.

Other states are likely to face some of the same issues as the 10 states whose data was reviewed by The New York Times, suggesting that the number of wasted doses in the country could be far higher. Other states, including North Carolina and South Carolina, did not respond to requests for information. State data does not include all doses that the federal government ships directly to chain pharmacies, so there could be unaccounted-for waste.

[Video not showing up above? Click here to watch » arkansasonline.com/82faucicbs/]

The Centers for Disease Control and Prevention tracks wasted doses, but did not respond to a request for that data, which would provide a broader national picture.

The rise in wasted vaccine doses reflects the challenge American health officials face in inoculating residents, even as the more contagious delta variant of the coronavirus fuels outbreaks among the unvaccinated across the United States.

"Early on, it was kind of a crisis because people wanted it and couldn't get it, and now it's a crisis because we've got it and people don't want it," said Dr. Marcus Plescia, who represents state health agencies as the chief medical officer for the Association of State and Territorial Health Officials.

Many states have asked about redistributing unused vaccines abroad, but once the doses are shipped out to states, federal regulations prohibit recalling them. And some countries, like Canada, have declined states' offers of surplus vaccines.

"Here we are with loads of vaccine, and there are other countries in the world where people are desperate for vaccination," Plescia said.

Vaccinations are now ticking upward in some states; more than 850,000 shots were recorded Friday, raising the daily national average to more than 650,000 from about 500,000 three weeks ago.

Currently, 58% of Americans 12 years and older are fully vaccinated, according to the CDC's data tracker.

People are "getting the message" and more are rolling up their sleeves amid the threat of the delta variant, Dr. Francis Collins, director of the National Institutes of Health, said on CNN's "State of the Union." He said vaccinations are up 56% in the U.S. in the past two weeks.

Louisiana, which has the most new cases per capita among states in the past 14 days, has seen vaccinations up threefold over that period, Collins said.

"That's what desperately needs to happen if we are going to get this delta variant put back in its place, because right now it's having a pretty big party in the middle of the country," Collins said.

He added he was pleased to see companies such as Disney and Walmart asking their employees to get vaccinated. And he expressed support for President Joe Biden's decision this past week requiring federal workers to get the vaccine or, "if they're not, to get regular testing, which is inconvenient."

"I think anything we can do to encourage reluctant folks to get vaccinated -- because they'll want to be part of these public events -- that's a good thing," Collins said.

When asked whether airlines should require proof of vaccination for passengers, Collins said that the decision was up to the airlines but that it could motivate people to get vaccinated if they want to be able to travel.

As officials plead with unvaccinated Americans to get their shots and covid-19 cases climb again, Dr. Anthony Fauci, the nation's top infectious disease expert, warned Sunday on ABC's "This Week" that more "pain and suffering" is on the horizon.

Fauci also said he doesn't foresee additional lockdowns in the U.S. because he believes enough people are vaccinated to avoid a recurrence of last winter. However, he said not enough are inoculated to "crush the outbreak" at this point.

On "Face the Nation" Sunday, Fauci emphasized the importance of getting more Americans vaccinated as the country faces a more contagious variant of the virus, implicating the unvaccinated in the rise in delta cases.

"We've really got to get those people to change their minds, make it easy for them, convince them, do something to get them to be vaccinated, because they are the ones that are propagating this outbreak," he said.

The resurgence of covid-19 in Texas has put some cities' health systems in dire circumstances, as intensive care unit beds fill up, officials say.

In Austin, the health department said there were only nine ICU beds available Friday in the 11-county trauma service region that includes the city and serves 2.3 million people. In San Antonio, covid-19 hospitalizations on Saturday were up by 430% since the start of July, the San Antonio Express-News reported.

On Sunday, there were 6,594 people in Texas hospitals with covid-19, which was the most since Feb. 24. State health officials reported 21 new covid-19 deaths on Sunday. Texas has had 53,248 covid-19-related deaths since the pandemic began, the third most in the U.S., according to Johns Hopkins University.

As of Saturday, only 43.8% of Texas' total population had been fully vaccinated. That trailed the national rate of 49.5% and was far behind Vermont, which had the highest rate of any state, at 67.5%, according to the CDC.

A day after it recorded the most new daily cases since the start of the pandemic, Florida on Sunday broke a previous record for current hospitalizations set more than a year ago before vaccines were available.

The Sunshine State had 10,207 people hospitalized with confirmed covid-19 cases, according to data reported to the U.S. Department of Health and Human Services.

The previous record was from July 23, 2020, more than a half-year before vaccinations started becoming widespread, when Florida had 10,170 hospitalizations, according to the Florida Hospital Association.

Florida is now leading the nation in per capita hospitalizations for covid-19, as hospitals around the state report having to put emergency room visitors in beds in hallways and others document a noticeable drop in the age of patients.

In the state capital, covid-19 hospitalizations reached 70 patients on Sunday at Tallahassee Memorial HealthCare, a jump of 11 people in two days.

"This is the most we've ever had," Stephanie Derzypolski, a hospital spokeswoman, told the Tallahassee Democrat.

The Mayo Clinic hospital in Jacksonville said it had exceeded its capacity of 304 licensed beds due to covid-19 cases and asked the Agency for Health Care Administration for permission to operate overcapacity until the current surge ends, First Coast News in Jacksonville reported Sunday.

Federal health data released Saturday showed that Florida reported 21,683 new cases of covid-19, the state's highest one-day total since the start of the pandemic. The latest numbers were recorded on Friday and released on Saturday on the CDC's website.

Information for this article was contributed by Dan Levin and Jesus Jimenez of The New York Times; by Jonathan Mattise, Hope Yen, Mike Schneider and staff members of The Associated Press.