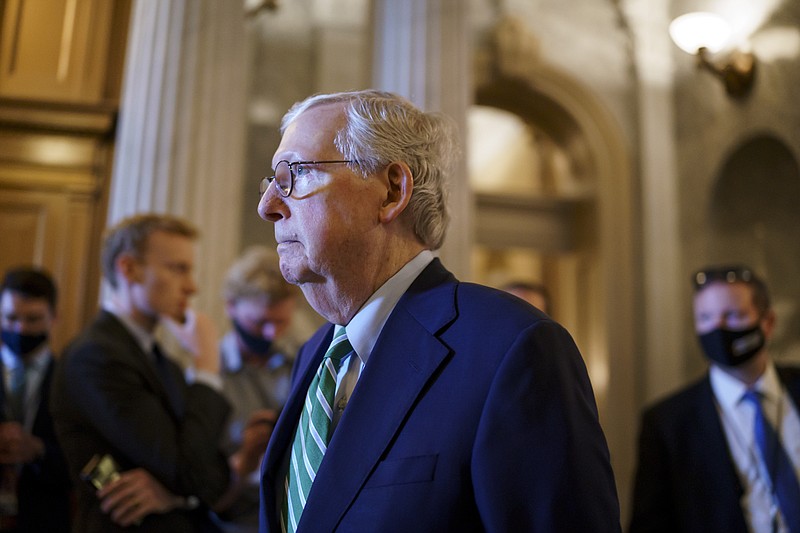 Senate Minority Leader Mitch McConnell, R-Ky., walks past the chamber as the Senate advances to formally begin debate on a roughly $1 trillion infrastructure plan, a process that could take several days, at the Capitol in Washington, Friday, July 30, 2021. (AP Photo/J. Scott Applewhite)

WASHINGTON -- After much delay, senators unveiled a nearly $1 trillion bipartisan infrastructure package Sunday night, wrapping up days of painstaking work on the inches-thick bill and launching what is certain to be a lengthy debate over President Joe Biden's big priority.

The Infrastructure Investment and Jobs Act clocked in at some 2,700 pages, and senators could begin amending it soon. Despite the hurry-up-and-wait during a rare weekend session, the final product was not intended to stray from the broad outline senators had negotiated for weeks with the White House.

Senate Majority Leader Charles Schumer, D-N.Y., said a final vote could be held "in a matter of days."

A key part of Biden's agenda, the bipartisan bill is the first phase of the president's infrastructure plan. It calls for $550 billion in new spending over five years above projected federal levels in what could be one of the more substantial expenditures on the nation's roads, bridges, waterworks, broadband and the electric grid in years.

[Video not showing up above? Click here to watch » arkansasonline.com/82roads/]

Senators and staff labored behind the scenes for days to write the bill. It was supposed to be ready Friday, but by Sunday even more glitches were caught and changes made. To prod the work, Schumer kept senators in session over the weekend, encouraging the authors to finish up work.

One by one, senators involved in the bipartisan effort rose on the Senate floor late in the evening Sunday to mark the moment.

"We know that this has been a long and sometimes difficult process, but we are proud this evening to announce this legislation," said Sen. Kyrsten Sinema, D-Ariz., a lead negotiator.

Republican negotiator Sen. Rob Portman of Ohio said the final product will be "great for the American people."

Over the long weekend of starts and stops, Schumer repeatedly warned that he was prepared to keep lawmakers in Washington for as long as it took to complete votes on both the bipartisan infrastructure plan as well as a budget blueprint that would allow the Senate to begin work later this year on a $3.5 trillion social, health and environmental bill.

"The longer it takes to finish, the longer we will be here, but we're going to get the job done," he said.

Sen. John Cornyn, R-Texas, predicted: "It's going to be a grind."

Among the major new investments in the bipartisan package are $110 billion for roads and bridges, $39 billion for public transit and $66 billion for rail. There's also $55 billion for water and wastewater infrastructure as well as billions for airports, ports, broadband internet and electric vehicle charging stations.

The spending is broadly popular among lawmakers, bringing long-delayed capital for big-ticket items that cites and states can rarely afford on their own.

Paying for the package has been a challenge after senators rejected ideas to raise revenue from a new gas tax or other streams. Instead, it is being financed from funding sources that might not pass muster with deficit hawks, including repurposing some $205 billion in untapped covid-19 relief aid as well as unemployment assistance that was turned back by some states and relying on projected future economic growth.

Bipartisan support from Republican and Democratic senators pushed the process along, and Schumer wanted the voting to be wrapped up before senators left for the August recess.

Last week, 17 GOP senators joined all Democrats in voting to start work on the bipartisan bill. That support largely held, with Senate Minority Leader Mitch McConnell, R-Ky., voting yes in another procedural vote to nudge the process along.

From here, the bipartisan group of 10 senators faces a delicate task. The lawmakers must keep together their fragile coalition, avoiding the sort of policy disputes that nearly doomed their efforts multiple times since they first announced their ambitions for new public-works spending in June. And they must remain open to changes while not allowing any that could undermine support for the legislation.

Sen. Susan Collins, R-Maine, one of the chief negotiators of the infrastructure deal, sounded a note of optimism about the path forward Sunday. Appearing on CNN's "State of the Union," she said it remains "my expectation and my hope" that the $1 trillion proposal could pass the Senate this week.

With every Democrat voting for the deal, the party still would need 10 Republican votes to advance infrastructure investments through the chamber. Collins predicted that those votes ultimately would be there as senators from both parties realize "the very concrete benefits, no pun intended, of this legislation."

Sen. Joe Manchin, D-W.Va., another negotiator, predicted that final passage could come as soon as Thursday -- an ambitious timeline that may hinge on lawmakers deftly navigating what might be a difficult amendment process over the days ahead.

Appearing on CNN, Manchin also stressed the bill's ubiquitous political appeal, calling the new investments "something every state, every area of every state, needs."

Yet serious political schisms still loom large over the bipartisan measure. Chief among them are concerns about its costs, given lingering doubts that the $1 trillion in new public-works spending is not actually covered by new revenue and could add to the deficit.

In an early sign of the bickering to come, Sen. Rick Scott, R-Fla., took his criticisms to the chamber floor Friday. He lambasted the "lofty and unrealistic revenue estimates" of the package, which he said would result in government spending that increased the risks of inflation.

Liberal Democrats harbor their own fears about the package: Rep. Alexandria Ocasio-Cortez of New York told CNN that she had some initial doubts about the financing mechanisms essentially being a boon for corporate America.

Ocasio-Cortez and other House lawmakers previously have questioned the scope of the Senate's infrastructure investments, believing that Democrats should have sought more as part of the deal, given their narrow but powerful majorities in both chambers of Congress. They have insisted that any new bipartisan deal on public-works spending must move in tandem with the second, roughly $3.5 trillion package, which includes many of Biden's other economic priorities, including an expansion of federal safety-net programs and other initiatives to fight climate change. Democrats intend to advance the package on their own -- bypassing likely GOP opposition -- using a legislative maneuver known as reconciliation that is reserved for budget measures.

Whether the number of Republican senators willing to pass the bill grows or shrinks in the days ahead will determine if the president's signature issue can make it across the finish line.

Cornyn said he expects Schumer to allow all senators to have a chance to shape the bipartisan bill and allow for amendments from members of both parties.

"I hope we can now pump the brakes a little bit and take the time and care to evaluate the benefits and the cost of this legislation," Cornyn said.

The bipartisan bill still faces a rough road in the House, where progressive lawmakers want a more robust package but may have to settle for this one to keep Biden's infrastructure plans on track.

The outcome with the bipartisan effort will set the stage for the next debate over Biden's much more ambitious $3.5 trillion package, a strictly partisan pursuit of far-reaching programs and services including child care, tax breaks and health care that touch almost every corner of American life. Republicans strongly oppose that bill, which would require a simple majority for passage. Final votes on that measure are not expected until fall.

Information for this article was contributed by Kevin Freking, Lisa Mascaro and Mary Clare Jalonick of The Associated Press and by Tony Romm of The Washington Post. 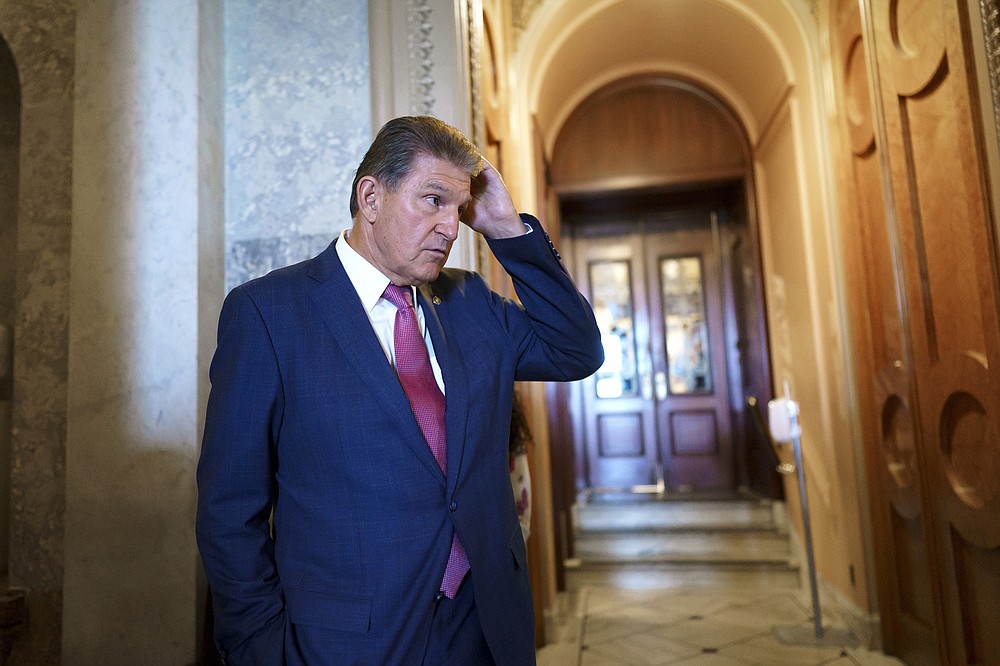 Sen. Joe Manchin, D-W.Va., a key negotiator in the bipartisan infrastructure agreement, stands outside the chamber as the Senate advances the roughly $1 trillion infrastructure plan at the Capitol in Washington, Friday, July 30, 2021. (AP Photo/J. Scott Applewhite) 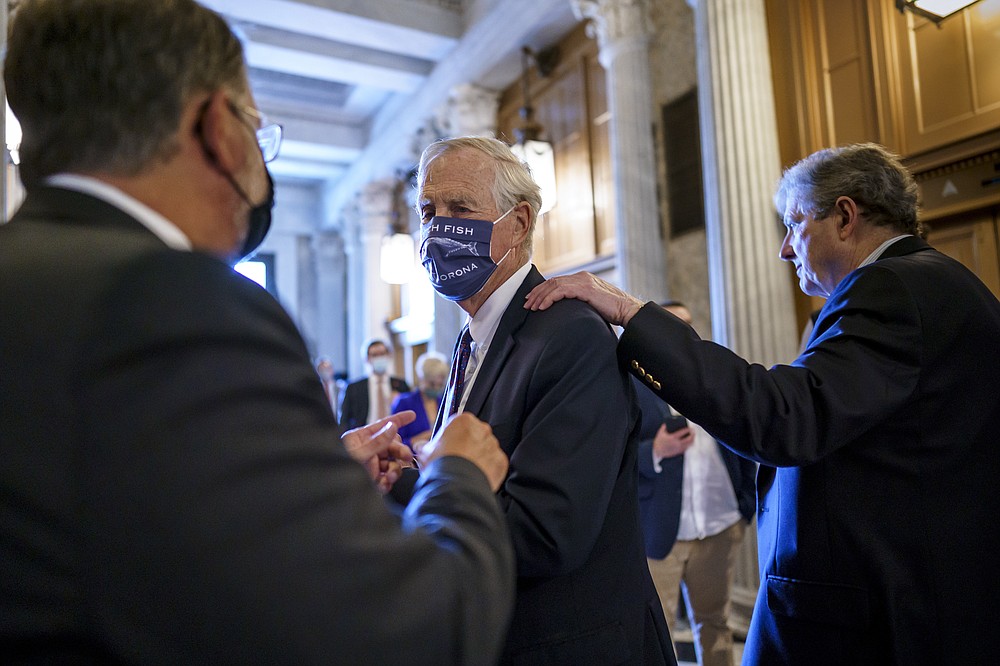 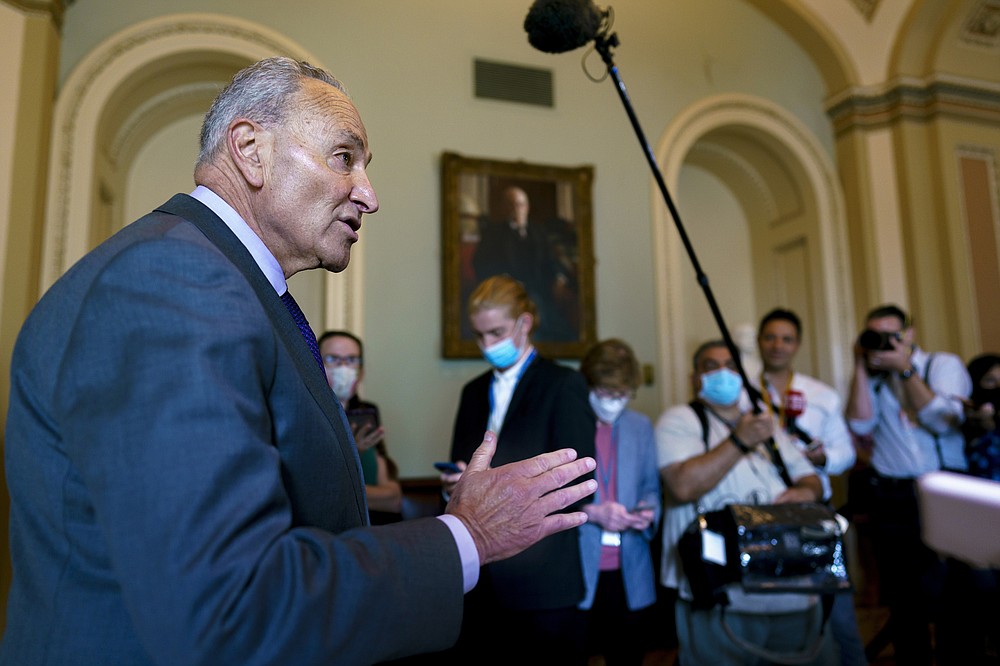