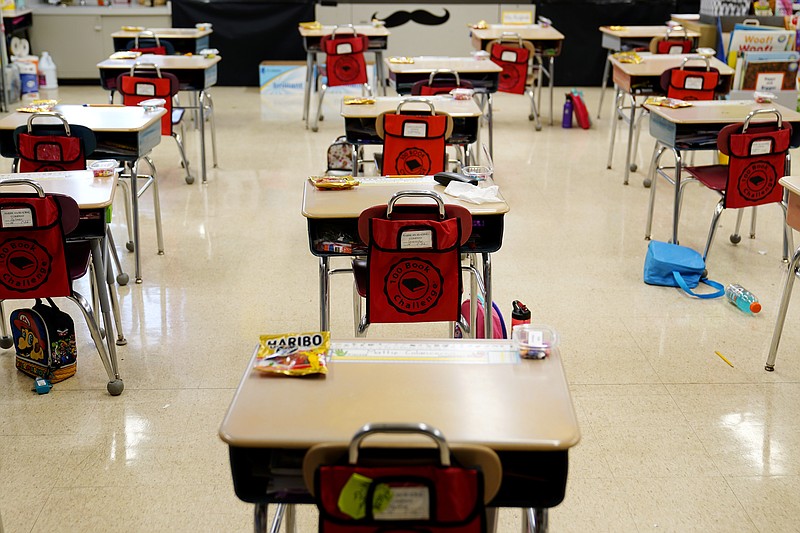 FILE - In this Thursday, March 11, 2021 file photo, desks are arranged in a classroom at an elementary school in Nesquehoning, Pa. (AP/Matt Slocum, File)

Health officials have expressed concern over a simultaneous rise in delta variant infections and cases of respiratory syncytial virus, or RSV -- a highly contagious, flu-like illness that is typically more likely to affect children and older adults.

[Video not showing up above? Click here to watch » https://www.youtube.com/watch?v=eIajUFlaSWY]

Cases of RSV have risen gradually since early June, with an even greater spike in the past month, according to data by the Centers for Disease Control and Prevention. RSV, which can cause symptoms that include a runny nose, coughing, sneezing and fever, normally begins to spread in the fall, making the summer spike unusual.

In a series of posts on Twitter, Dr. Heather Haq, a pediatrician at Texas Children's Hospital in Houston, described an increase in both coronavirus and RSV hospitalizations. Haq is also the chief medical officer for the Baylor College of Medicine International Pediatric AIDS Initiative at the hospital.

"After many months of zero or few pediatric COVID cases, we are seeing infants, children and teens with COVID pouring back into the hospital, more and more each day," she wrote, adding that patients have ranged in age from 2 weeks to 17 years old, including some with pneumonia.

"We are on the front end of a huge COVID surge," wrote Haq, who could not be reached for comment Sunday. "We are now having winter-level patient volumes of acutely ill infants/toddlers with RSV, and I worry that we will run out of beds and staff to handle the surge upon surge."

RSV cases in Texas began to increase in early June and appeared to peak in the middle of July, according to data from the state's health department.

Florida has experienced a similar spike in RSV cases, as infections "were above those seen at this time in past years," according to a surveillance report of the virus.

In Louisiana, where cases have jumped by 244% in the past two weeks, Our Lady of the Lake Children's Hospital in Baton Rouge was nearing its capacity Friday, CNN reported.

"You start with the pandemic for the last 18 months, and then RSV for the last couple of months. It just seems to be one thing after another that's keeping our teams very busy," Dr. Trey Dunbar, president of the hospital, told the news channel.

In Oklahoma, which also has seen a spike in RSV cases, hospital beds are becoming scarce.

"We are just asking everyone to do what they can to help a strained hospital situation," an Oklahoma pediatric clinic said in a Facebook post last week.

Dr. Cameron Mantor, chief medical officer for Oklahoma Children's Hospital at OU Health, told The Oklahoman that in the past two months, RSV cases in the state have been "exponentially off the charts."

"RSV is a real issue right now," he told the newspaper. "What is going to happen if we do have a surge in pediatric COVID cases?"

The rise in RSV cases comes as new coronavirus infections have risen by 148% in the United States in the past two weeks and as hospitalizations have increased by 73%, according to New York Times data.

The surge of coronavirus infections has been largely attributed to the highly contagious delta variant and to low vaccination rates in some states.

"I worry as kids go back to school with the delta circulating, we will see huge school outbreaks that we didn't see in prior waves, disproportionately affecting kids," Haq wrote. "I've cared for hospitalized pediatric patients with COVID throughout the pandemic, but this time with unvaccinated, susceptible children plus delta variant, we will see more pediatric COVID admissions."

Florida could face similar challenges from viruses when the school year begins. Gov. Ron DeSantis has spoken out against new masking recommendations from the CDC, with his office saying in a statement last week "that parents know what's best for their children."

The spike in RSV cases in not limited to the United States. New Zealand has also recently reported a surge in RSV infections.