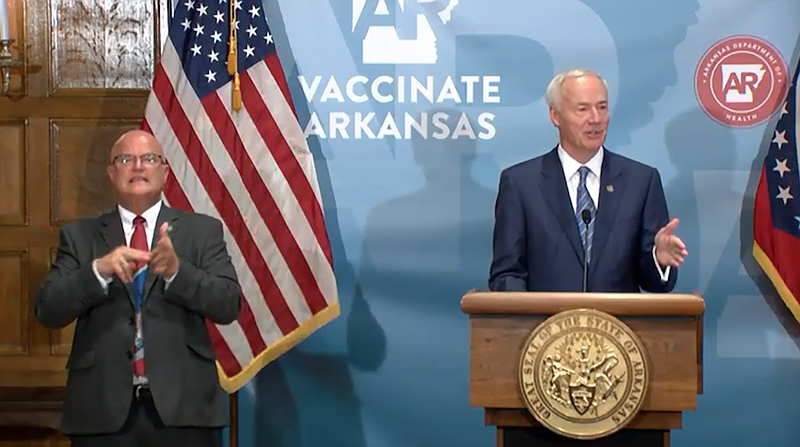 Gov. Asa Hutchinson speaks Tuesday to reporters at the state Capitol in Little Rock in this screenshot of video provided by the governor's office.

The number of covid-19 patients in Arkansas who were hospitalized and on ventilators continued rising Tuesday to levels not seen since January as the state's count of cases rose by 2,343.

Meanwhile, the Department of Health reported that the number of vaccine doses that had been administered rose by 30,756 - the third-largest increase in a single day since the department began reporting the vaccination numbers each day in January.

Gov. Asa Hutchinson said about 25,000 of the doses went to people who were starting the vaccination process.

"The demand has increased. I'm pleased with that," Hutchinson said at a news conference at the state Capitol.

[Video not showing up above? Click here to view » https://www.youtube.com/watch?v=zucEaNJ1ZOA]

The number who were on ventilators rose by 10, to 260. That was the largest number of covid-19 patients on the breathing machines, as reported each day by the Health Department, since the all-time high of 268 on Jan. 11.

The state's death toll from the virus, as tracked by the Health Department, rose by 16, to 6,215.

Tuesday's increase in cases was larger by 291 than the one the previous Tuesday.

As a result, the average daily increase in the state's case count over a rolling seven-day period rose to 1,943, its highest level since Jan. 22.

With new cases outpacing recoveries, the number of cases in the state that were considered active rose by 577, to 19,499.

That was just short of the six-month high of 19,738 the number reached on Sunday.

Gov. Asa Hutchinson on Tuesday called for a special session focused on creating an exception to a law prohibiting state and local governments from implementing mask mandates for public school boards and affirming the decision of the state Workforce Services Administration director to end Arkansas’ participation in supplemental federal unemployment benefits.

Hutchinson is asking lawmakers to create an exception to Act 1002 of 2021 that would give public school boards flexibility to “protect those school children who are 11 and younger and not eligible for a vaccine,” according to a news release from the governor’s office.

“We understand the value of in-classroom instruction, and we want those children to be as safe as possible,” Hutchinson said at a news conference Tuesday afternoon, adding that local school districts “should have more options to make sure that their school is a safe environment during a very challenging time for education.”

The governor also said in a news release that he is asking legislators to affirm that the director of Workforce Services may exercise discretion to “participate in or to cease participation in any voluntary, optional, special, or emergency program that the federal government offers.”

Hutchinson ended the state's participation in federally funded pandemic unemployment supplements that pay out-of-work job seekers an extra $300 a week. Pulaski County Circuit Judge Herb Wright ordered that the state must resume the payments, arguing that the governor did not have the power to withdraw from the program.

The extraordinary session is scheduled to begin at 10 a.m. on Wednesday.

The Arkansas House of Representatives and state Senate on Tuesday completed its review of Gov. Asa Hutchinson’s restatement of the public health emergency, allowing it to continue.

Citing the rise in covid-19 hospitalizations, the Republican governor on Thursday reinstated the public health emergency that he had allowed to expire at the end of May.

The House and the Senate on Tuesday each convened in a committee of the whole to review the emergency declaration as called for in Act 403 signed by Hutchinson in March.

Then, Sen. Dan Sullivan, R-Jonesboro, withdrew his concurrent resolution that he said would have limited the public health emergency to 30 days.

The emergency will expire 60 days from Thursday, unless the emergency is terminated at an earlier date, or it is approved for renewal by the Legislative Council.

Gov. Asa Hutchinson spokeswoman Shealyn Sowers said the governor this afternoon will issue a call for a special session this week.

Last Thursday, he said he would likely call a special session this week to consider changing a state law that bans state and local governments from requiring individuals to wear masks and allow local school boards to decide whether to require masks in the public schools.

A Pulaski county circuit judge on Thursday ordered the state to try to resume its participation in the program that Hutchinson sought to end.

to their regular unemployment compensation benefits from the state.

Hutchinson announced in May that he would end Arkansas’ participation in the federal program after June 26, saying the federal supplements were interfering with employers’ ability to find enough workers.

This story has been updated. It was originally published at 11:31 a.m.