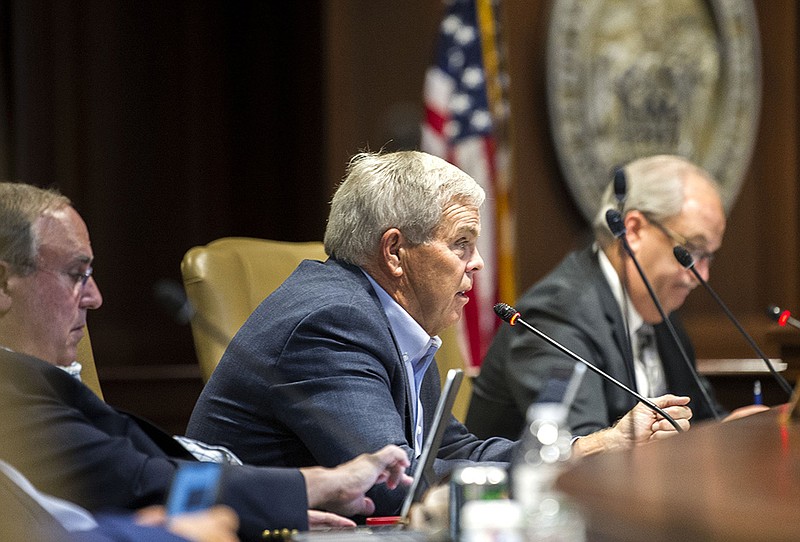 Arkansas Senator Dan Sullivan asks a question during a joint meeting of the Senate and House Committees on Public Health, Welfare, and Labor on Monday, Aug. 2, 2021. The meeting discussed the impact of the Delta variant on children, vaccination rates, and current hospital capacities through the state. See more photos at arkansasonline.com/83health/ (Arkansas Democrat-Gazette/Stephen Swofford)

State lawmakers are returning to the state Capitol this morning to review Gov. Asa Hutchinson's reinstatement of a statewide public health emergency over covid-19 and expect to meet in a special session starting Wednesday to consider proposed legislation to allow public school officials to decide whether to require masks in schools.

But Hutchinson hasn't issued the call for the special session yet.

Senate President Pro Tempore Jimmy Hickey, R-Texarkana, said Monday that one of the two proposed bills being circulated among state lawmakers would allow school boards to decide whether to require masks in public schools with children under 12 years old, who are ineligible to be vaccinated.

The other proposed bill being circulated would respond to a Pulaski County circuit judge's ruling Thursday that ordered the state to try to resume its participation in a federal unemployment assistance program that Hutchinson had sought to end, Hickey said.

Circuit Judge Herbert T. Wright's temporary injunction against Hutchinson's order affects some 69,000 unemployed Arkansans who had been receiving weekly $300 federal supplements to their regular unemployment compensation benefits from the state.

Hutchinson announced in May that he would end Arkansas' participation in the federal program after June 26, saying the federal supplements were interfering with employers' ability to find enough workers.

Wright wrote in his ruling, "The Court has serious doubts that the Governor and the Director of Workforce Services were acting within the scope of their duties, as these decisions would normally be the subject of legislation from the General Assembly."

Asked why Hutchinson hasn't issued the call for the special session yet, his spokeswoman, Shealyn Sowers, said Monday night she had no comment.

On Friday, she was asked when the governor would issue the call and give the details of his proposed legislation. "More information will be released Monday," Sowers said that day in a written statement.

Hickey said he expects the governor to call the Legislature into special session starting at 10 a.m. Wednesday.

But Hickey said the proposed legislation on mask mandates in public school is "not even close" to having the 18 votes required for approval in the 35-member Senate.

But he said, "You never say never."

The proposed bill's emergency clause would require a two-thirds vote in the 35-member Senate and 100-member House to go into effect immediately upon the governor's signature of the bill. Otherwise, the bill would go into effect 90 days after the governor signs the bill. If the bill passed the Legislature and were signed by the governor this week, it would take effect in early November.

The latest covid-19 surge is taking place now and school starts in mid-August.

"I serve with a lot of great people and they represent their areas and a lot of them feel like they need to listen to the people in their area and, if the people are calling and asking to vote against some of this, then that's what they are going to do," she said.

"I have a wonderful area and I think I have a lot of support there," Bledsoe said.

On March 30, Hutchinson announced he was lifting the state's mask mandate.

Attorney Tom Mars of Rogers announced Monday that he has filed a lawsuit in Pulaski County Circuit Court to prevent the enforcement of Act 1002 and to seek a ruling that the law is unconstitutional. The suit was unavailable online Monday evening. The Little Rock School District also has threatened to sue over Act 1002.

Citing the rise in covid-19 hospitalizations, Hutchinson on Thursday reinstated the public health emergency he had allowed to expire at the end of May.

The state House and Senate are each scheduled to convene in a committee of the whole at 10 a.m. today to review the emergency declaration as called for in Act 403, signed by Hutchinson in March.

If a resolution terminating the emergency is passed, Hutchinson could veto it and the the Legislature could consider overriding the veto.

The emergency will expire 60 days from Thursday, unless the emergency is terminated at an earlier date, or it is approved for renewal by the Legislative Council.

During Monday afternoon's meeting of the Senate and House Public Health, Welfare and Labor Committees, state Rep. Mary Bentley, R-Perryville, said she heard that masking children increases their carbon dioxide levels and that children didn't properly know how to wear them, causing them to pick dirt, urine and fecal matter.

But Dr. Jennifer Dillaha, the state epidemiologist, told lawmakers that CO2 molecules are much smaller than the covid virus and that they would easily be able to move outside the mask.

She said the virus is carried in droplets, which are much bigger than the virus itself, and that's how the mask catches them.

"The cloth mask would have to have a totally enclosed system to increase carbon monoxide levels," Dillaha said. "Claims that it could do that don't make any medical sense to me."

Sen. Kim Hammer, R-Benton, asked Dillaha why the conversation isn't more about vaccines and less about masks since he said most evidence points to the drop in coronavirus cases earlier this year being credited to the vaccine.

Dillaha said both measures are necessary if the state wants to see a drop in cases.

"Without vaccines and masks we will not be able to suppress this virus to keep from overwhelming our hospital system," she said.

Dillaha said the vaccines were 98% effective in the beginning, but now medical officials are seeing about a 10% decrease with breakthrough cases being noted across the country because of the delta variant.

After being questioned about the effectiveness of cloth masks, she said that all types of masks can be effective. She said layers on cloth masks can reach medical grade protection and that anything aside from N95 masks protects more against the wearer spreading particles than breathing in particles.

"When [masks] are implemented they decrease the transmission of covid-19," she said.

She said a study from the United Kingdom says the delta variant infects around eight people on average.

Dillaha said the best way to prevent the transmission of the virus is a combination of things.

"Vaccinations will lower the risk of infections and transmission," she said. "Masking practices, practicing social distancing and good hygiene, as well. Some other things that can be done is increasing ventilation in an area and if they are sick then stay home and not infect other people."

At the state Capitol on Monday morning, several dozen people attended a rally to oppose proposed legislation that would allow school boards to decide whether to require masks in the public schools.

Parents -- not local school boards -- should decide whether their children wear masks in the public schools, Martin said.

Afterward, Arkansas School Boards Association Executive Director Tony Prothro said the association doesn't have a position on the proposed legislation that would allow school boards to decide whether to require masks in the public schools.

Like other Arkansans, school board members have varying opinions about requiring masks in the public schools, he said. He said their opinions depend in part on whether they live in the urban or rural parts of the state.

If the Legislature changes Act 1002 to allow school boards to decide whether to require masks in the public schools, school board members across the state want a data system, maybe from the Arkansas Department of Health or Arkansas Children's Hospital, to show the number of covid-19 cases in each district and in each school in addition to advice about a threshold for closing schools, Prothro said.

School board members across the state want to get students back into school because of the learning loss that resulted from remote learning last school year, he said.

Arkansas Department of Health spokeswoman Meg Mirivel said Monday, "We are in talks internally about potentially restarting the educational report that we produced on Mondays and Thursdays last school year." That report shows cases in staff, faculty and students, she said.

The Arkansas Center for Health Improvement has started updating its report that shows community cases within the boundaries of the school districts, she said.

The Department of Health "does not set a specific threshold, because every situation is different," she said. "For example, if a school has cases mostly in teachers and staff, that may impact their ability to keep the school open, even if the number of cases is not high."