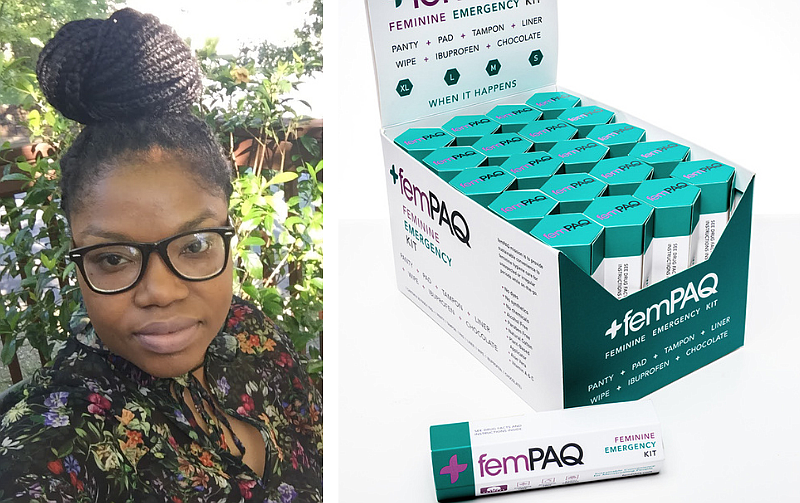 During a girls’ trip in 2018, April Roy’s friend got her period unexpectedly and quickly learned there was no easy way to get clean and comfortable again with the items found at a nearby pharmacy.

She couldn’t find her preferred sanitary napkins, and all the napkins were in packages too large to fit into her suitcase. She also found just a few pairs of underwear were available, and none were in her size.

From this experience, Roy, of Little Rock, created femPAQ, a company that sells emergency menstrual hygiene kits designed to help people who get their periods unexpectedly.

Each kit includes a pair of black underwear in one of four sizes, a pad, a tampon, a panty liner, feminine wipes, ibuprofen and a little bit of chocolate.

“We take the oops out of unexpected periods by providing a complete and sustainable emergency kit to help businesses stay prepared for menstruating customers and employees,” Roy said.

Roy started femPAQ in 2018 and transitioned to working on the business full time in fall 2020.

In June, she won a $15,000 cash prize in an Arkansas pitch competition called Pitch N' Pint, and Roy and the company are also set to be featured in an episode of “2 Minute Drill,” a TV show on Amazon Prime and Bloomberg TV in which entrepreneurs compete for cash and prizes.

Roy’s focus is getting the kits into businesses, schools and workplaces, so they’re available when someone might need one.

“Our goal is to get in every space menstruators exist,” she said. “Think about amusement parks, rest areas, gas stations, travel centers, schools, colleges, outdoor festivals, sports arenas, concerts — again, like I said, pretty much every space that women exist.”

When Roy first imagined femPAQ, she was a little surprised nothing like it was already on the market. Then she realized that was probably because decision makers in the business world tend to be men, who don’t typically deal with unexpected periods.

Now, as an entrepreneur seeking funding, Roy is constantly pitching her idea to this “old guard,” as she called them, a demographic to whom periods have long been taboo.

Roy isn’t just a woman in the male-dominated industry, she’s also a Black entrepreneur in a field dominated by white people.

She said people are sometimes surprised when they meet her and she introduces herself as femPAQ’s founder. She said she’s even had to convince people the company is real during meetings with potential investors or business owners who may want to carry her product.

“It was so weird for me, and I started to reach out to fellow business owners of color and they were like, ‘Oh we get that all the time,’ having to say, ‘Yeah we are a real company,’” Roy said. “I shouldn't have to tell you that.”

Aside from selling her product, Roy said getting people talking about menstrual health and removing the stigma around periods is a key part of her work.

Katie Clark, founder of the Arkansas Period Poverty Project, said she met Roy in 2019 when she offered to donate kits to the organization, which advocates for expanded access to menstrual products in the state. Clark said those kits went to local schools and a domestic violence shelter to help people who may not be able to afford pads or tampons.

Roy also worked with the organization during the General Assembly’s legislative session earlier this year to advocate for a few bills, including one that would eliminate the standard sales tax on menstrual products.

Clark said national surveys estimate around one and four women and girls struggle to afford period products, and adding the standard state sales tax of 6.5% — which is not applied to items considered to be necessities, such as groceries — makes pads and tampons more inaccessible.

“We have really been trying to fight and push to change that,” Roy said. “If Arkansas passed it, they would be one of the first states in the Bible Belt to start this movement.”

Although Roy lives in Little Rock, the business is based in Northwest Arkansas. She thinks that region is more hospitable to startup companies and plans to move with her family to the area sometime soon.

She said with the cash from the recent pitch competition win and general buzz around femPAQ, the company is in a position to hire staff and start expanding.

“I've been so focused as an entrepreneur in trying to make a name for ourselves, it's like, okay, now people are starting to know who we are, what we do,” she said. “Now it's really time to push the product, and the education around menstrual hygiene health.”