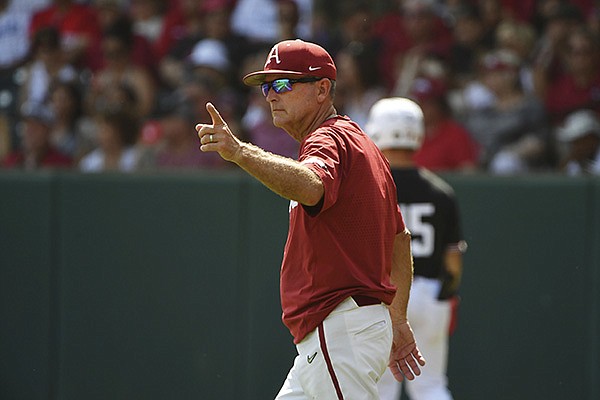 FAYETTEVILLE — Arkansas will play baseball games against Indiana, Stanford and Louisiana-Lafayette as part of the 2022 Round Rock Classic, the management company for the event announced Tuesday.

The Razorbacks’ games will be played Feb. 25-27 at Dell Diamond in Round Rock, Texas. The 11,631-seat ballpark is home to the Texas Rangers’ Triple-A affiliate.

Arkansas is scheduled to play the late game each day at the event. The Razorbacks are scheduled to play Indiana on Feb. 25, Stanford on Feb. 26 and Louisiana-Lafayette on Feb. 27. All games will be streamed via FloSports, which requires a monthly or yearly subscription.

Three-day passes and single-game tickets are also on sale through the Round Rock Classic website.

Indiana, Stanford and Louisiana-Lafayette all had winning records in 2021, but only Stanford played in the NCAA Tournament. The Cardinal (39-17) advanced to the College World Series.

Louisiana-Lafayette is coached by Matt Deggs, a former assistant under Arkansas coach Dave Van Horn from 2003-05. Deggs was also an assistant coach under Van Horn at Northwestern (La.) State from 1996-97.

Arkansas has rarely played the three teams it will see in Round Rock, with 11 combined games against them. The Razorbacks last played Indiana in 1982, Louisiana-Lafayette in 1999 and Stanford in 2008.

The Round Rock Classic is in its third season. It is managed by Peak Events, which also oversees the Frisco Classic. Arkansas played in the inaugural Frisco Classic in 2017.