World down deep: Championship draws divers from around the globe 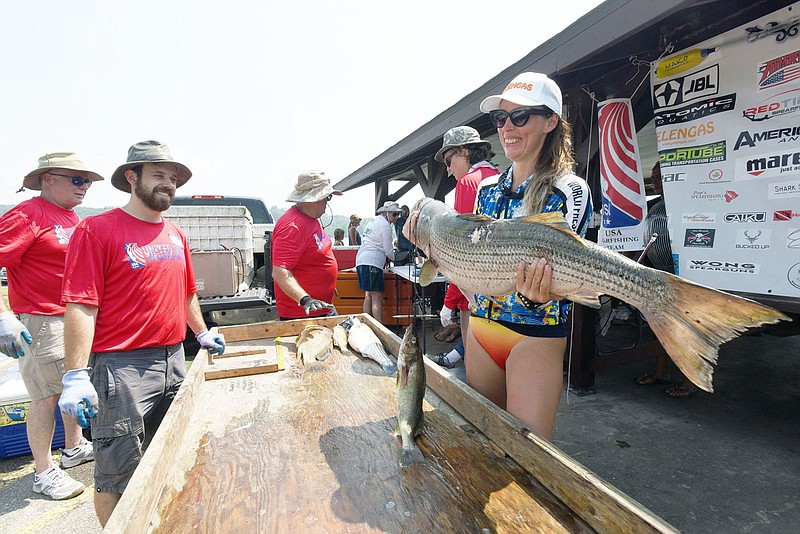 Anzhela Holovianko, a diver from Ukraine, shows a heavy striped bass she shot July 22 2021 at Beaver Lake during the World Freshwater Spearfishing Championship. Forty-four free divers (without the aid of scuba tanks) from eight countries took part in the contest. Some can stay underwater as long as five minutes.

Take a deep breath please and hold it as you keep reading.

Men and women competing in the World Freshwater Spearfishing Championship at Beaver Lake brought in some breath-taking catches from the cool depths. Some of the world's most skilled spearfishers donned masks and fins, but no scuba tanks, in the contest held July 20-23.

Oh, did you exhale already?

These free divers from around the world can hold their breath underwater four to five minutes in their spearfishing quest.

Imagine not breathing, then swimming down 30 feet with a speargun to shoot a big striped bass, then hauling that fish to the surface. The 44 divers from seven nations accomplished that task bringing stripers, freshwater drum, walleye, catfish and more to the scoring table at the Dam Site Park day-use area at Beaver Dam.

For example, the daily limit for walleye at Beaver Lake is four, so spearfishers could bring in two walleye. But here's the catch. Walleye have to be 18 inches or longer to keep at Beaver Lake. A spearfisher better be darned sure that fish they're eyeing is of legal size. Contestants who bring in any illegal fish are disqualified for that day.

The championship is truly a world event. Divers hailed from Ukraine, Zimbabwe, Moldavia, South Africa, Cuba and the United States. Six divers came from Guam, including Monique Amani, one of several women in the contest.

[Video not showing up above? Click here to watch » https://www.youtube.com/watch?v=wGy8Lx5GwME]

It's no cheap ticket traveling thousands of miles to Northwest Arkansas to compete. Divers from overseas either rented boats or chartered fishing guides to drive them to their underwater destinations. Many brought their families, so lodging and meals are added expenses

"A lot of it boils down to who can afford to make the trip," Amani said, clad in her wet suit waiting to weigh her fish. All divers in the championship wore wet suits. The water is warm on the surface, 85 degrees, but cold down 20 to 30 feet deep, 70 degrees, where most game fish dwell at Beaver Lake during summer.

"Most of our free time we spend scouting the lake," she said.

Divers are allowed to scout the lake for 10 days ahead of the championship, exploring the silent underwater world and putting a plan together for the competition. Some of them go see the sights.

"We went to Walmart four times in two days," Amani said. "We don't have Walmarts in Guam."

Opening day, July 20, was striped bass day. Only one striper could be shot, to be within legal limits. July 21 was an off day, followed by game fish day (black bass excluded) on July 22. Divers got one point per pound of fish they shot. The last day, July 23, was rough fish day where divers shot mainly carp and gar. For these, divers were awarded two points for each fish.

Prizes were awarded in several divisions including, men, women, co-ed teams and masters.

Divers shot 16 stripers on striper day. All those were donated to the Game and Fish Northwest Arkansas fisheries staff for a study of striped bass taking place at Beaver. Rough fish were hauled off and turned into fertilizer by Food Recycling Solutions. The area firm can process up to 1,000 pounds of fish or food waste daily, said owner Richard Ims.

A fish fry feast for divers, their families and guests was held the evening of game fish day. Some divers kept fish for themselves.

Pat Atherton, another contestant from Guam, has been a serious spearfisherman for 55 years. Atherton said he could stay submerged four to five minutes in his younger days. Now it's more like two or three.

"Personally I wouldn't shoot a fish more than four feet away," he said.

Divers use pneumatic powered spearguns or guns powered by thick rubber bands. A fishing reel and line are attached to the gun to retrieve the fish.

The World Freshwater Spearfishing Championship happens every other year, said Tournament Director Mike McGuire of Colorado. The first one was in 2017 at Lake Mead near Las Vegas. The 2019 event was in New Zealand.

"We looked at Beaver and Bull Shoals lakes for this event because both are top lakes for diving," he said. Divers were allowed to shoot fish anywhere between the dam and Point 6, east of Rocky Branch park.

The 2023 championship site isn't set, but Ukraine is being considered, some of the divers said. 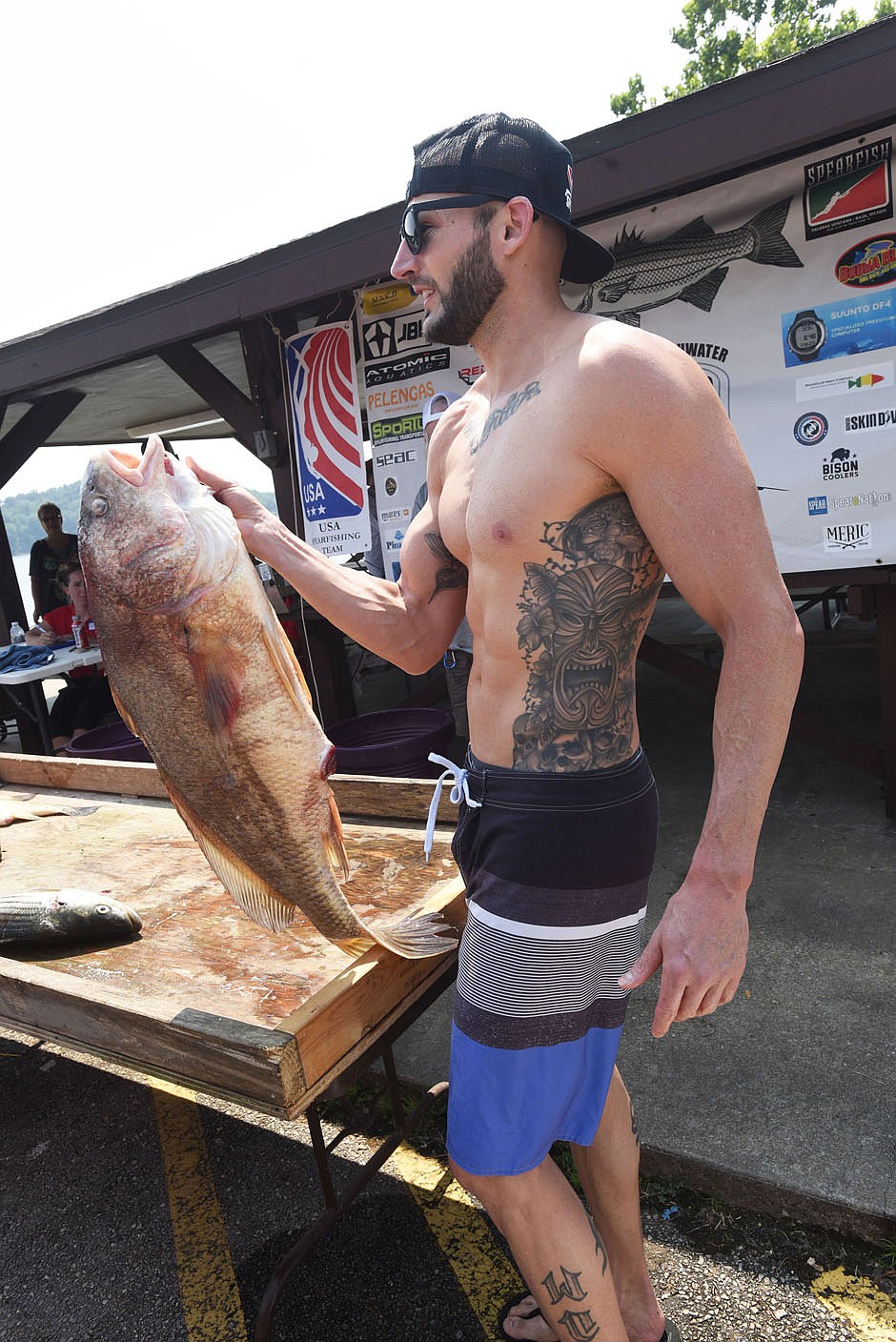 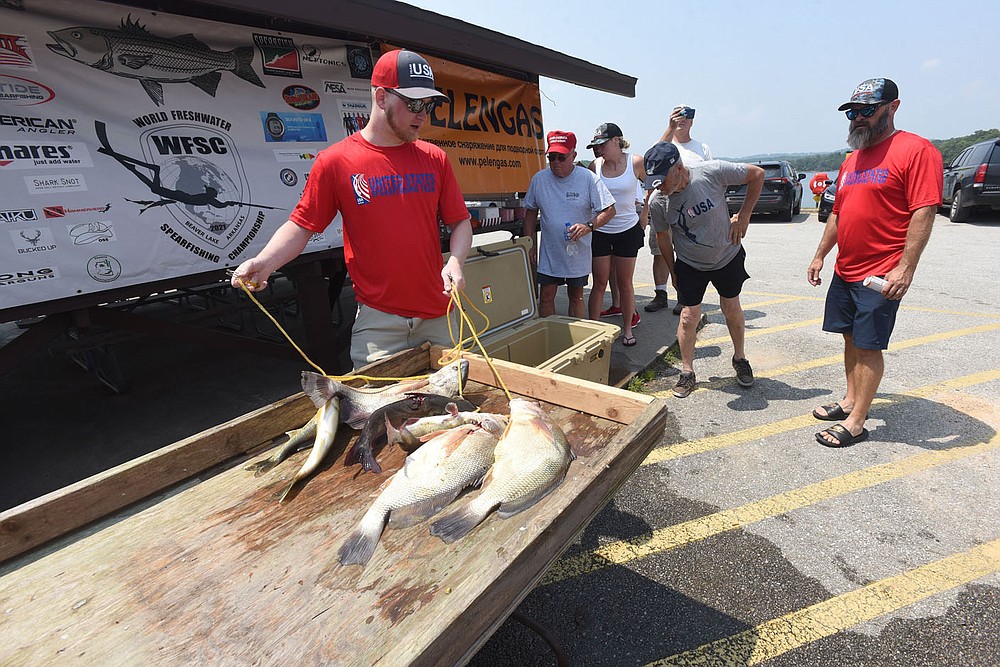 Ryan Peterson, a spearfisherman from Utah, checks in July 22 2021 with his take of catfish, walleye and freshwater drum. (NWA Democrat-Gazette/Flip Putthoff) 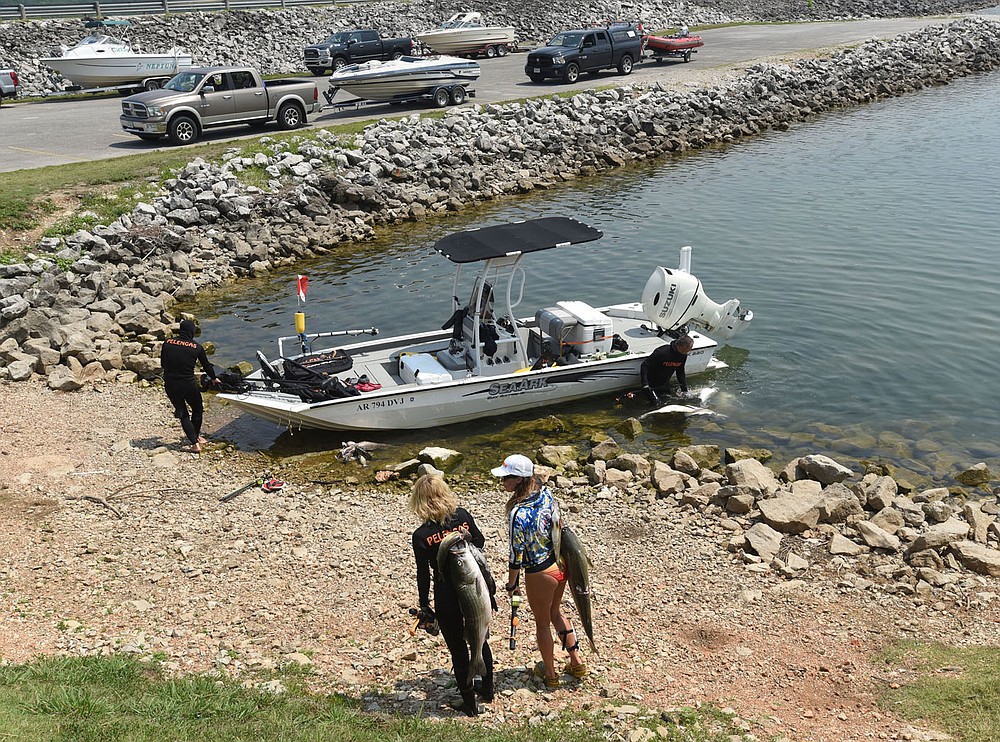 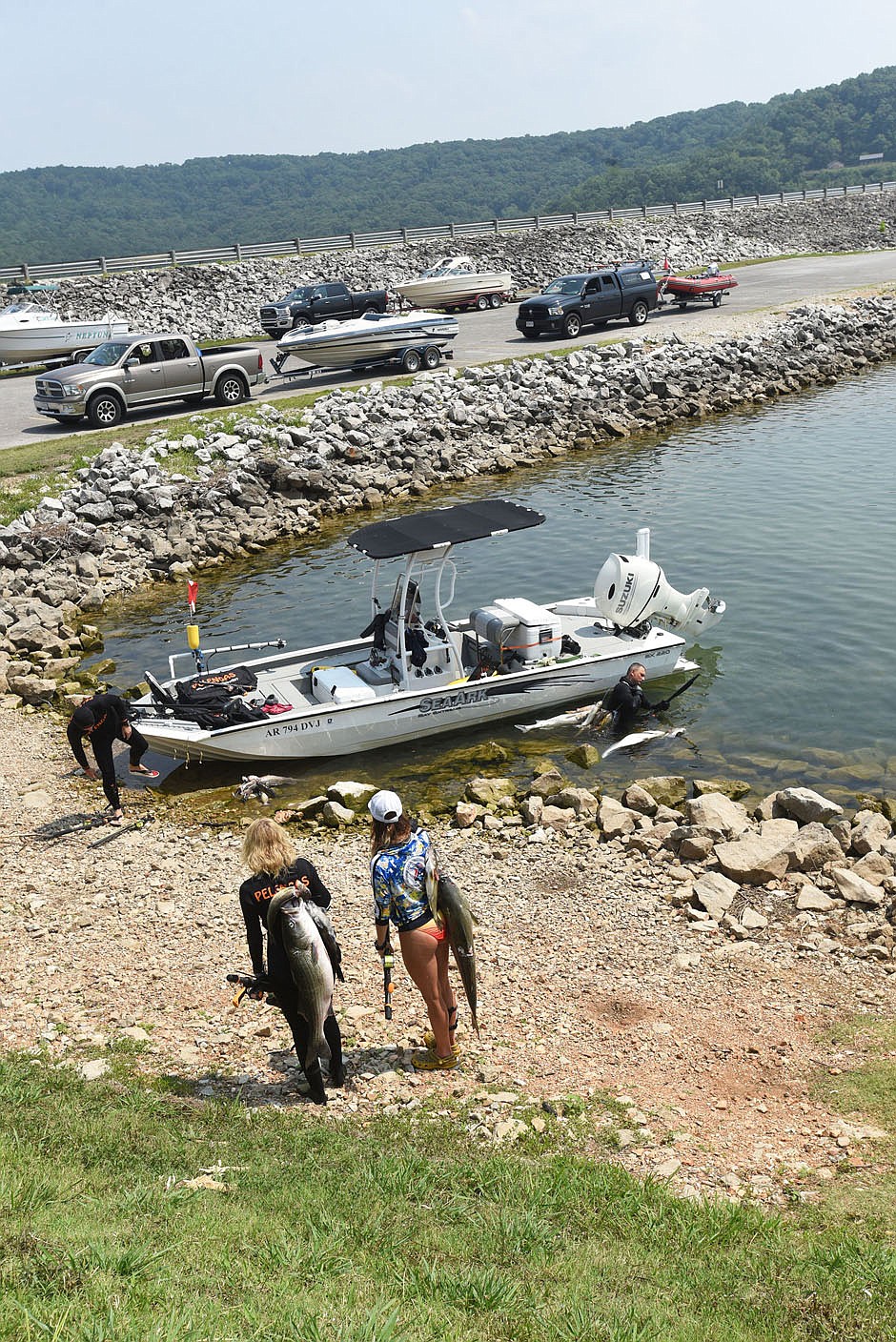 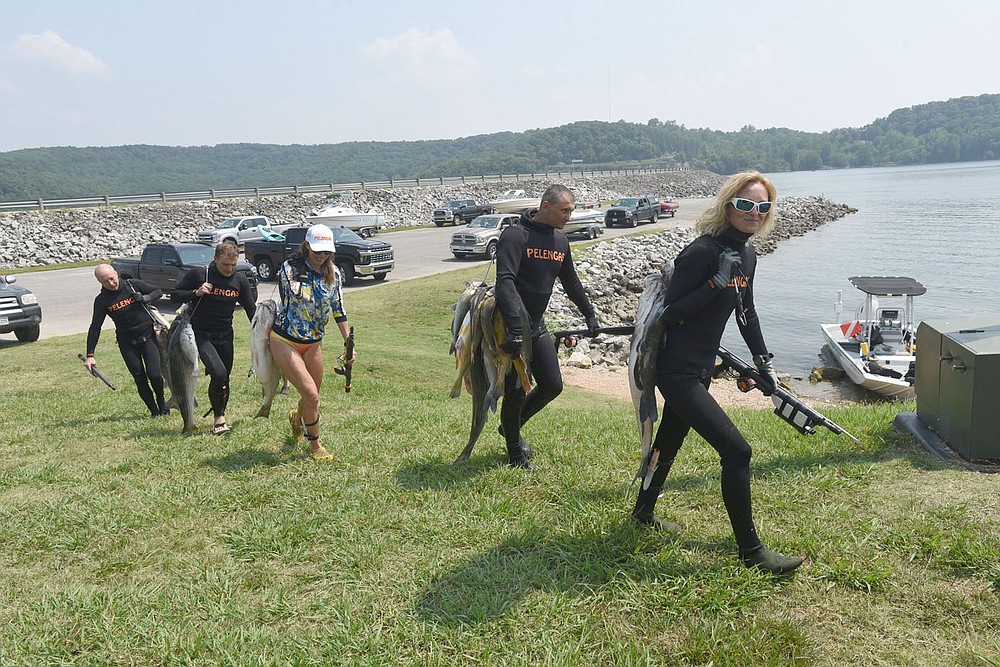 The spearfishing team from Ukraine carries July 22 2021 their fish to the weigh-in. (NWA Democrat-Gazette/Flip Putthoff) 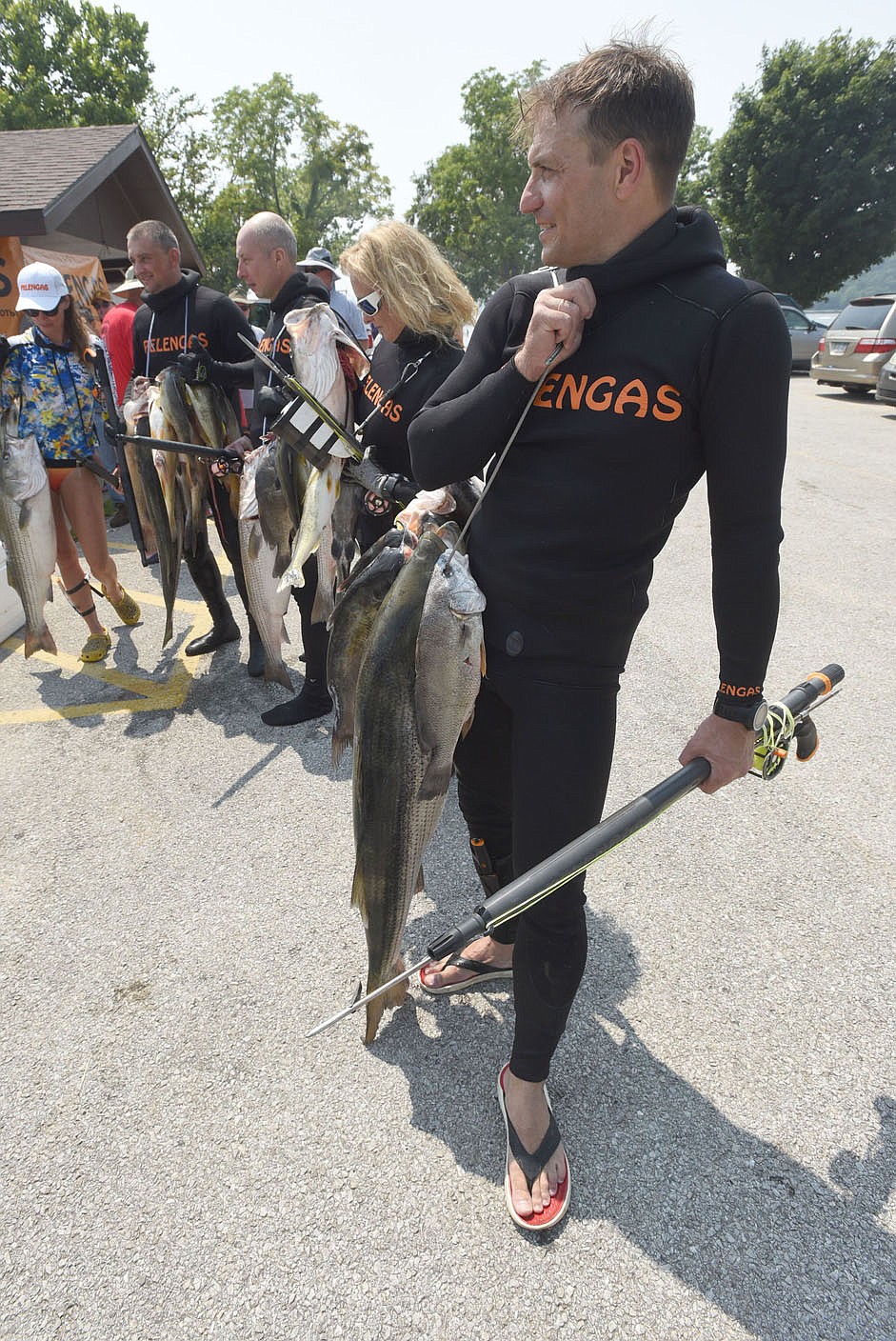 Spearfishing season for game fish at Beaver Lake is open June 15-March 15, sunrise to sunset. Spearfishing for largemouth, spotted or smallmouth bass (the three species of black bass) is prohibited. Rough fish may be taken all year.

When spearfishing, half the game fish daily limit, or the lesser number nearest half, may be taken. Spearfishermen must display a standard diver’s flag and be no more thatn 100 yards from it.