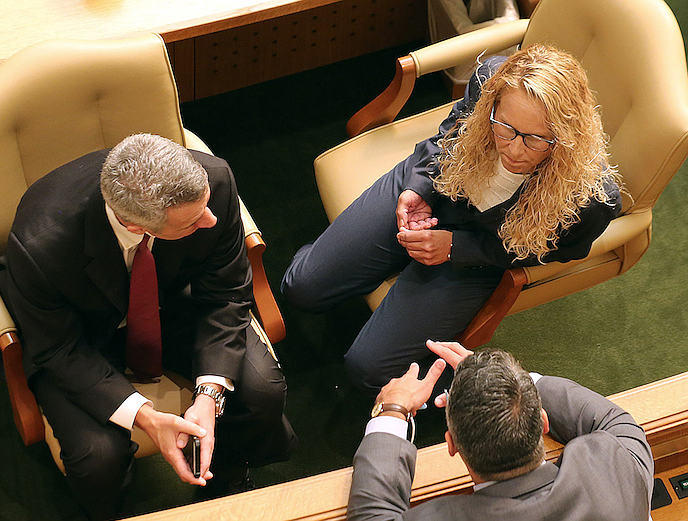 Gov. Asa Hutchinson on Tuesday called the General Assembly into a special session that starts today to consider his proposal to loosen a ban on covid-19 mask mandates in government by allowing public school boards to require students under age 12 to wear the face coverings.

But House and Senate leaders said they doubt there are enough votes in either chamber to enact the proposal.

Lawmakers are to convene at 10 a.m. today in the state Capitol.

Hutchinson noted that children younger than 12 cannot receive covid-19 vaccinations under U.S. Centers for Disease Control and Prevention guidelines, and therefore are at greater risk of contracting the respiratory disease, particularly the currently dominant delta variant.

"We want those children to be as safe as possible" in the classrooms, the governor said. Most public schools open to students in two weeks, and virus numbers have been surging.

"Local school districts should make the call, and they should have more options to make sure that their school is a safe environment during a very challenging time for education," Hutchinson said at a news conference in the governor's conference room at the state Capitol.

The proposed legislation would amend Act 1002, by Sen. Trent Garner, R-El Dorado, that prohibits state and local governments, including public schools, from requiring people to wear masks. Act 1002 became effective on July 28. It contains some exceptions.

Changing Act 1002 would take a majority vote in the 35-member Senate and 100-member House of Representatives. But it would require an additional two-thirds vote in both chambers to approve an emergency clause for the bill so it would become effective upon the governor's signature. Otherwise, the bill would become effective 90 days after the governor's signature, or sometime in November.

Senate President Pro Tempore Jimmy Hickey, R-Texarkana, told reporters that there aren't 18 votes in the Senate to approve Hutchinson's proposal, and "as of right now I don't see us getting it this week."

"I would rather that not be on the call if we [are] for sure that it is not going to pass, just that so we can monitor it a bit closer," he said, "So possibly in a week or two weeks or three weeks, maybe something changes that legislators believe at that time we can do it.

"Sometimes when somebody already has taken action on something it is hard to go back to it, so that's my reason for saying it."

At his news conference, Hutchinson said the draft bill he presented is "ready to go, but if there is better ideas or other ideas, that's the will of the Legislature as long as it is within the parameters of that call.

"I have spoken with Sen. Hickey and [House Speaker Matthew Shepherd, R-El Dorado] both, and it is very clear that there is many that just don't want this in their lap," he said. "It's clear to me some school superintendents don't want it either, but this is the call that has to be made, and that's the process that's set up, so we may or may not get there."

Hutchinson said he wants to give the Legislature a chance to help protect children younger than 12 and give local school boards flexibility to require these children to wear masks.

"We are hearing from our people back home," he said, and "that's why I think why you are starting to see a growing number of Republicans that are becoming resistant to changing anything with Act 1002."

The Legislature enacted Act 1002 because "we believe that individuals have the right to make these decisions for themselves and not government," Flippo said.

On March 30, Hutchinson announced that he was lifting the state mask mandate.

Asked if lawmakers would change their minds about changing Act 1002 if a few children died from the delta variant in public schools, Flippo said, "First of all, nobody wants see anybody die."

The options for parents include having their child wear a mask, learn remotely or home-school, he said.

Senate Democratic leader Keith Ingram of West Memphis said Hutchinson's proposal has a difficult path to clear the Senate, and "I am completely bewildered" about the lack of support for the proposal in the chamber.

He said one of elected officials' first jobs "is to take care of our people ... and this is just irresponsible."

Through a House spokeswoman, Shepherd said there are still conversations ongoing about Hutchinson's proposal, but he does not believe there are enough votes in the House to make revisions to Act 1002.

House Public Health, Welfare and Labor Committee Chairman Jack Ladyman, R-Jonesboro, said he did not believe there would be support among representatives for a bill changing Act 1002 based on feedback from constituents.

"The emails, the calls that I'm getting, and the texts, and you know one day I got more than 1,000, and they're running 9 to 1 to leave it the way it is ... so when I'm getting that information from my constituents in my district I can't vote for it," he said.

According to the General Assembly's website, no bill that would implement Hutchinson's proposal had been filed as of 7 p.m. Wednesday.

"We are seeing the real life consequences of laws that we pass and how they have an effect on people," she said. "This is one of the processes we go through to change a law, but there has to be the will to change it. I don't know if the will is there."

Hutchinson also called on lawmakers to affirm his decision to end Arkansas' participation in a federal unemployment assistance program he sought to end.

The measure is in response to a Pulaski County circuit judge's temporary injunction against Hutchinson's order that affects some 69,000 unemployed Arkansans who had been receiving weekly $300 federal supplements to their regular unemployment benefits from the state. The ruling has been appealed to the state Supreme Court.

Hutchinson announced in May that he would end Arkansas' participation in the federal program after June 26, saying the federal supplements were preventing employers from finding enough workers.

The nonprofit Legal Aid of Arkansas and five jobless Arkansans filed a lawsuit July 23 against Hutchinson and the state Division of Workforce Services, which manages the unemployment compensation program.

Hutchinson said his proposal "would be to provide legislative clarification that the intent of the Legislature gave authority to opt out of a federal optional program."

Sen. Jonathan Dismang, R-Searcy, introduced Senate Bill 1 to do that.

Kevin De Liban, a staff attorney for Legal Aid of Arkansas, said, "The governor did something illegal, and he's trying to rewrite the rules. ... The situation is not improving for low-income and struggling Arkansans."

Hickey and Ladyman said they thought the bill would pass.

On Tuesday morning, the House of Representatives and Senate completed their review of Hutchinson's restatement of the public health emergency, allowing it to continue.

Citing the rise in covid-19 hospitalizations, Hutchinson on Thursday reinstated the public health emergency that he had allowed to expire at the end of May.

The House and the Senate each convened in a committee of the whole, as called for in Act 403 signed by Hutchinson in March.

Lawmakers could have terminated the public health emergency by approving a concurrent resolution.

The emergency will expire 60 days from last Thursday, unless the emergency is terminated at an earlier date, or it is approved for renewal by the Legislative Council.

At his news conference, Hutchinson said Tuesday that he is grateful for the quick action by the General Assembly.

"Now we all have one voice that there is a current public health emergency in Arkansas," he said. "This is an example of how the relationship between the executive and legislative branches can work successfully without delaying any emergency actions." 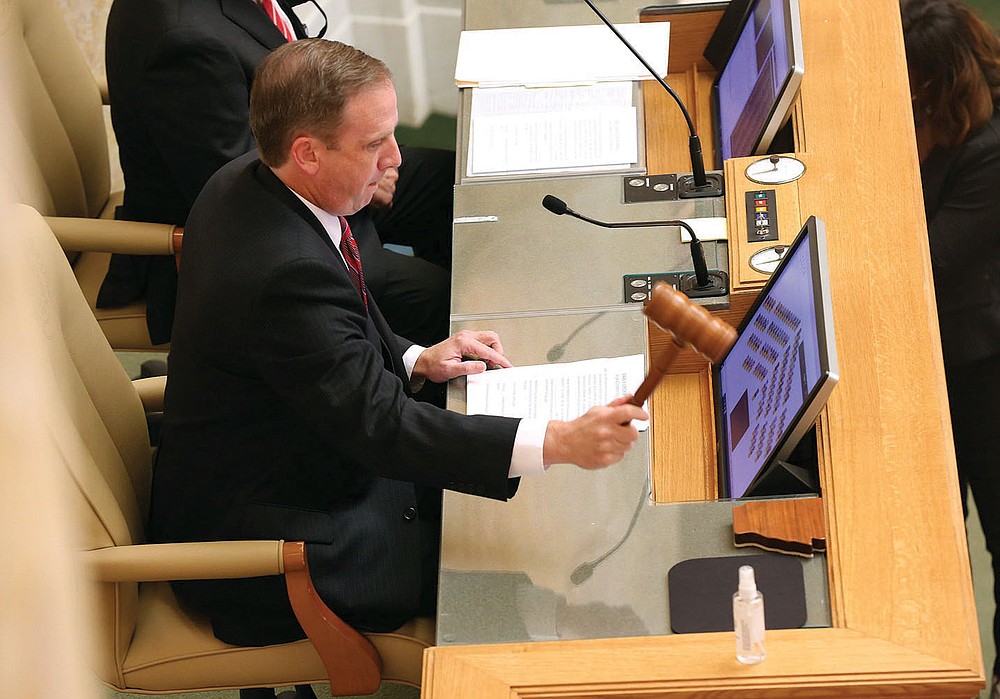 Speaker of the House Matthew Shepherd gavels in the committee of the whole for the General Assembly to review the governor's emergency declaration on Tuesday, Aug. 3, 2021, at the state Capitol in Little Rock. (Arkansas Democrat-Gazette/Thomas Metthe)