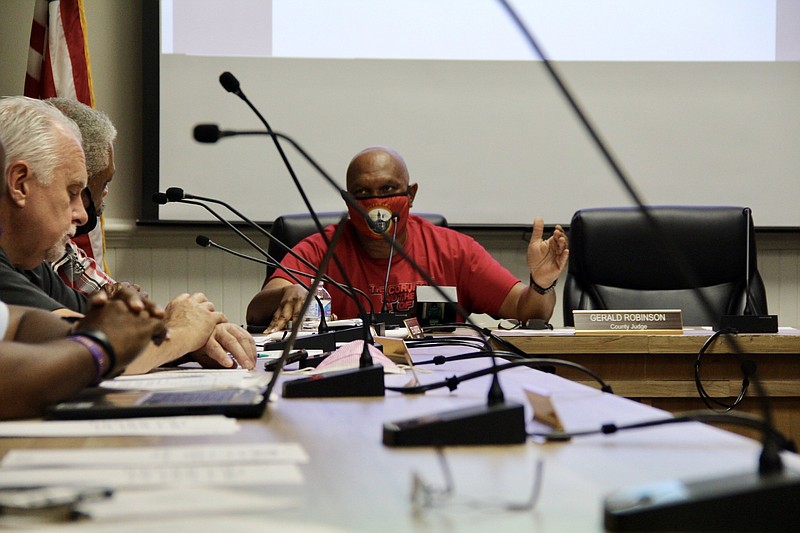 Jefferson County Judge Gerald Robinson said he will be requesting an additional raise for county employees for a total of 10% in order to get them up to a living wage. (Pine Bluff Commercial/Eplunus Colvin)

Another raise for Jefferson County employees was on the docket for this week's Quorum Court committee meeting.

At the meeting, County Judge Gerald Robinson pointed out that county workers had received a 4% raise earlier this year but had been promised total raises of about 10%.

Robinson told the quorum court members that, after looking at the county's finances, he believes the county can sustain the raises and that he's ready to give the other 6%.

"We talked about this for many months, and we want to do right by our employees. It is time," said Robinson. "I know everyone may not have agreed with what I've done, but it was all done for the betterment of Jefferson County to move us forward. If we have the opportunity, let's do what we promised."

In other business, quorum court members approved several appropriation ordinances to be sent to the full Quorum Court.

During the Budget and Finance Committee meeting, an appropriation ordinance to delete a slot in the assessor's office and distribute those funds accordingly within her office was discussed.

Yvonne Humphrey, Jefferson County assessor, said that, because an employee that did not return from medical leave and because of the countywide hiring freeze ordinance, she was asking for the money from the deleted slot to be released to her office as the duties of the assessor's office clerks had increased.

According to Humphrey, the money would not be equally distributed because not everyone in her office displays the same work ethic.

"It's not going to be distributed evenly because some persons step up to the plate and are coming in on weekends, staying late, and everybody else doesn't do it," said Humphrey, who currently has six employees. "Some of them just don't step up."

Justice of the Peace Glenda Daniels asked if distributing the funds throughout the department was a common practice after deleting a slot.

According to Robinson, the practice was not common, but it is something he has considered doing to compensate the additional workload of the county employees.

"When you give extra work, we want to try to reward those who are stepping up to the plate and doing it," said Robinson.

Humphrey said she would prefer to hire another employee because she has an employee who will be leaving. That vacancy, Humphrey said, will put a strain on her office.

"There are so many things that we need to be doing that we can't do because of the lack of bodies," she said.

Humphrey said recently that her staff went out to log new businesses into the system and discovered that Saracen Casino Resort wasn't even on the books.

"If we don't pick up these assessments, you're going to see a decline in revenue," said Humphrey, who named big corporations like Simmons Bank that still needed to be assessed. "This is money. I have other stuff to do. The people who do that are gone."

Humphrey said 90% of the funding for her office is reimbursed and does not come from County General funds. She also asked that the justices of the peace try to understand how her office operates and why the need for a person is high on her list of priorities.

"We talked about spreading the money out because she had another person that was thinking about leaving, and so if we spread the money out, that may entice them to stay," said Robinson.

According to Robinson, county employees are not making livable wages.

"I can attest to my office. I still have people here making less than $9 an hour and been here 12 years," said Robinson, who also said those salaries were not in line with the salary survey.

"I trust that she does need another person, but if we can spread that money to other employees, hopefully she won't lose them because now they're making a little bit more money," the judge said.

An appropriation ordinance to increase the salary for the Office of Emergency Management's administrative slot would increase the pay by $8,000 for Salinda Hayden, who has been employed with the county since 2007.

"In 2011 the OEM office took over many of the administrative duties for the 14 rural fire departments," said Blevins, who requested the increase in salary and fringe benefits be funded by the $300,000 annual allocation from the Public Safety Sales Tax Fund-Rural Fire Services. "The Jefferson County fire services Mutual Aid Association has given their full support for the increase."

According to the Mutual Aid Association, in the years before 2011, the association contracted with a person that did administrative duties for the fire departments. In 2011, the county judge decided to move those duties to the OEM office and used the money to fund a grant-writing position in his office.

"We would like to see those monies go to the OEM office's budget to reimburse it for the administrative assistant's position due to the work that the office does for us," said a Mutual Aid Association representative.

In other county business, an appropriation ordinance to create an expenditure line in funding the American Rescue Plan for eligible widows, widowers or caretakers of parents who have died from covid-19 was approved to go to the full Quorum Court.

Because the covid-19 death toll in Jefferson County is among the highest in the state and has impacted families significantly, both economically and with the loss of loved ones, Robinson said he is authorized to determine eligible survivors and disburse payments.

Direct payments can be made to widows and widowers who lost spouses and children who have lost parents as a result of covid-19.

"The covid pandemic is still real. It is still very effective and dangerous of attacking our population and the citizens of Jefferson County," said Robinson. "I've had too many calls from the coroner of us losing more people from covid-19. We are not out of danger." 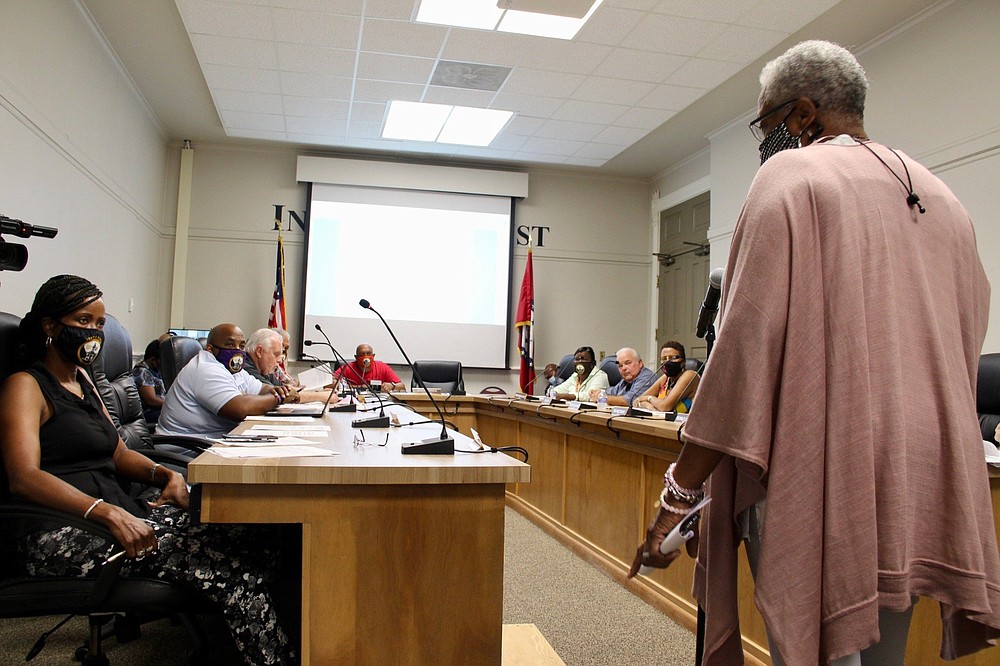 Yvonne Humphrey (right), Jefferson County assessor, said she is in need of office personnel, and if her office doesn’t pick up assessments, the county is going to see a decline in revenue. (Pine Bluff Commercial/Eplunus Colvin)