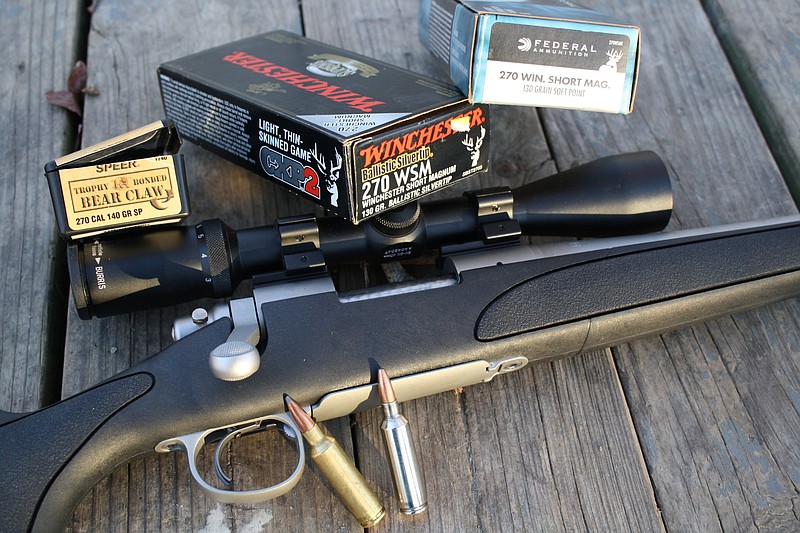 The 270 Winchester Short Magnum offers power equivalent to the 270 Weatherby in a variety of packages, but for Arkansas deer hunting, it might be too much of a good thing. (Arkansas Democrat-Gazette/Bryan Hendricks)

For a great many hunters, deer rifle conversations start with the 270 Winchester, one of the greatest North American big game hunting cartridges.

For all its heritage and mystique, the 270 Win. is the weakest of a very short roster. The .27-cal. family contains only two other commercial contenders comprise, the 270 Winchester Short Magnum and the 270 Weatherby, a fabled selection in its own right.

With a massive powder charge providing the flat trajectory that accompanies blazing speed, the 270 Weatherby is the consummate western hunting cartridge. The 270 WSM comes very close to duplicating it.

As we said, though, the conversation starts with the 270 Win., so let's start that conversation.

When Winchester commercialized the .270 in 1925, the 30-06 Springfield and 7x57 Mauser were the primary cartridges available for long-range hunting. The 7x57 is anachronistic, but with modern powders, bullets and barrel steels, the 30-06 is as popular as ever.

When introduced, the 270 Win. was advertised as driving a .277-inch diameter, 130-gr. bullet at about 3,150 feet per second. With the crude telescopic optics of that era, it was lethally accurate to about 350 yards. Modern optics and better bullets stretch accuracy to 1,000 yards, but at about 300-350 yards, the wound channel is proportional to expanded bullet diameter, which delays mortality. This limits its immediate lethality to about what it was in 1925. For the ranges at which most deer are killed in Arkansas, it is all you will ever need and, in most situations, more than you will ever need.

With a well-designed stock and proper shooting technique, recoil is gentle. Ammo selections are diverse and plentiful, but only within a very limited spectrum. That's because the 270 Win. is perfectly matched to a 130-gr. bullet. Most loads were developed and optimized around that one bullet weight. It still runs about 3,100-3,200 fps, but modern bullets, with tougher construction and higher ballistic coefficients, extend the .270's range.

You can get .277-cal. bullets as light as 90 grains and as heavy as 175 grains, but 130 grains is the sweet spot. Bullets weighing 120 grains or less are better suited to .257 or .264 cal. platforms. Bullets weighing 140 grains or more are better suited to 7mm (.284 cal) or .30-cal. platforms. To accurately place heavy bullets requires a barrel with a non-standard twist rate capable of stabilizing a longer, heavier bullet. Such a thing might have to be custom built.

None of that is a consideration for most Arkansas deer hunters. In any pine thicket, oak flat, utility right-of-way or beanfield, a 130-gr., 277-cal. bullet will put a deer on the ground with routine efficiency. It's boring and stodgy, but it works very well.

I've had two 270 WSM rifles. One was a Remington Model 700 SPS Stainless that Basel Rajab used to kill his first deer nearly 10 years ago. Light and handy, it was ideal for mountain hunting, but it was also substantially overpowered for mountain hunting. Rajab killed his deer at about 40 yards. At that range, a 22 Hornet would have worked just as well.

I replaced that rifle with a Browning A-Bolt II Eclipse with a laminated stock and a bull barrel with Winchester/Browning's Ballistic Optimizing Shooting System. It contains an adjustable muzzle weight that tunes the barrel's harmonics to be at the center of the sine wave when a bullet exits the muzzle. It is utterly accurate with a wide range of bullet weights and styles.

It also has a muzzle brake that, combined with the rifle's heavy weight, virtually eliminates recoil. Regrettably, the rifle is too unwieldy for carrying. It can only be fired from a sturdy, stable rest.

That demonstrates that you can get a 270 WSM in any configuration you want, and it will enable you to take any ungulate in North America, as well as black bears.

Introduced in 1943, the 270 Weatherby offered substantial increases in speed and power over the older 270 Win. Combined with Weatherby's bomb-proof Mk. V action, it was the perfect western hunting cartridge for those that could afford it. Weatherby mated it with a rakish, aggressively designed stock that was crafted entirely for distinctive good looks. Without a muzzle brake, it punishes all comers. Bob Rogers of Maumelle, a big, brash, fearless bear of a man, used one for years before finally throwing in the towel in 2020. He got a custom rifle in 280 Ackley and retired his jaw-jacking Weatherby.

Unfortunately, anyone that wants Weatherby power has to put up with Weatherby attitude. Weatherby attitude makes a shooter flinch, which sets in motion a lot of bad habits that diminish a hunter's ability to shoot accurately. If you must have a Weatherby, a brake is well worth the investment.

Unless you expect to take deer at really long distances, a 270 Weatherby is excessive for Arkansas hunting. The same is true for the 270 WSM.

For deer hunting in Arkansas, the conversation about .277-cal deer rifles begins -- and ends -- with the 270 Win. 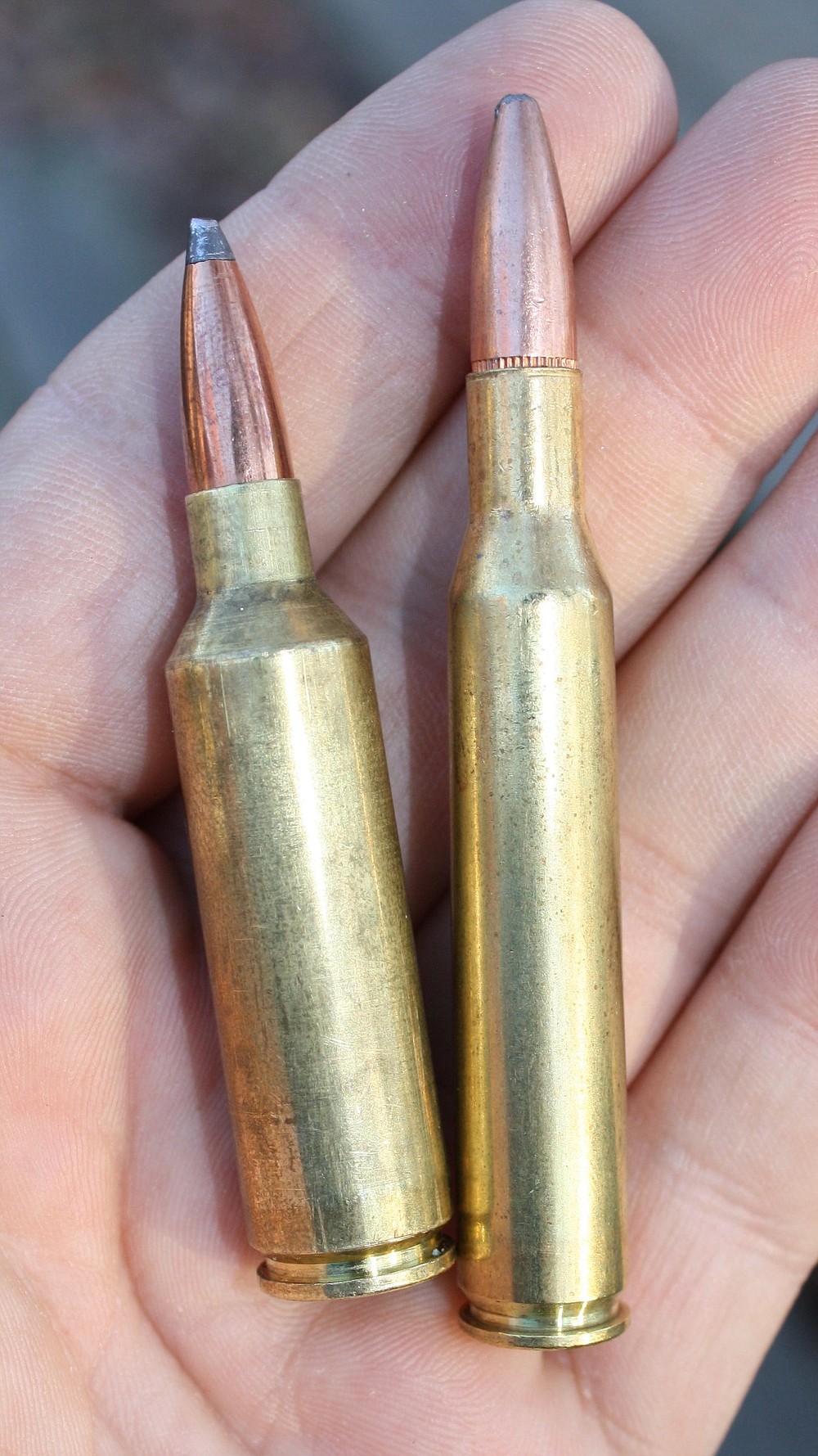 The short, fat case of the 270 WSM holds more powder and cycles through a short action compared to the long, slender case of the more traditional 270 Winchester. (Arkansas Democrat-Gazette/Bryan Hendricks)