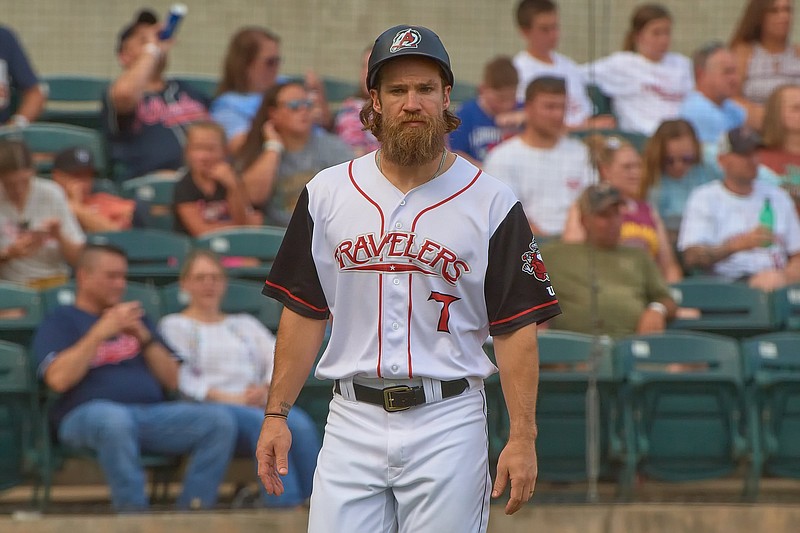 Arkansas Travelers Manager Collin Cowgill is shown in this photo.

Sitting under a tent just outside his team's clubhouse, Arkansas Travelers Manager Collin Cowgill looks the same as he has all season. His light brown hair spills out the back of his cap and his "Duck Dynasty"-esque beard lingers halfway down toward the top of his jersey.

The first-year skipper has been a steady presence at Dickey-Stephens Park, all the more critical with nearly half of the Travs' Opening Day roster no longer in North Little Rock. And that's something Cowgill prides himself on.

"Being the same guy every day no matter what [is important]," Cowgill said. "Losing teammates is no fun. ... It's been challenging [as a manager], but it's not as challenging for me as it is for the guys who have to live with them and room with them and eat with them every day."

Many of Cowgill's experiences as a manager are all too familiar. He played for five different major-league clubs over six seasons and his pro career as a whole spanned more than a decade. He was traded thrice, elected free agency three more times and was once released.

But it didn't make the task of releasing David Masters and Connor Lien any easier. As invaluable as Cowgill's baseball journey has been in his first season leading a team of his own, he wasn't prepared to be the bearer of bad news.

There's also been the other side of the coin, with the chance to tell several of his players they're headed up to Class AAA Tacoma. Ian McKinney and Penn Murfee are now part of the Rainiers' regular rotation and closer Darin Gillies -- who'd spent part of the last three seasons with the Travs -- recently joined them after converting all 10 of his save opportunities.

Add in catcher Brian O'Keefe, who's continued to rake while making a jump behind the plate as well, plus Darren McCaughan, who made his major-league debut last month and threw five hitless innings in his first Mariners appearance.

"That's definitely satisfying when they go up and do well," Cowgill said. "But the most compliments I get are when [Tacoma Rainiers manager Kristopher Negron and pitching coach Rob Marcello] call me and say, 'Great job with O'Keefe. He's a better catcher, he's a better person, he's a better clubhouse guy.'

"That's satisfying when you impact a person and not just a player."

Over the back half of the Travs' season, there's plenty to be excited about.

That's along with recent arrivals Patrick Frick, Kaden Polcovich and Jack Larsen, who will all be part of the Travs' postseason push -- they're within striking distance of second-place Wichita, and only the top two teams in the Class AA Central will play for the league title in late September.

No matter how long the Travs' season lasts, Cowgill's family will stick around. His wife Alyson has been in North Little Rock all season with the Cowgills' two kids. Fans are liable to see see Cowgill tossing a ball with his son Oakland before or after a game.

They'll return home to Cincinnati for the winter, but Cowgill hopes he'll have the chance to manage again next season. "I've been around long enough to know that this game is year-to-year," he said.

But after spending so many years crisscrossing the country living out his baseball dreams, Cowgill's grateful he's been able to share this part of his journey with those he loves most.

"Being a manager is more time-consuming than a player but having them here is absolutely the best thing ever," Cowgill said. "It makes the game a little less important."