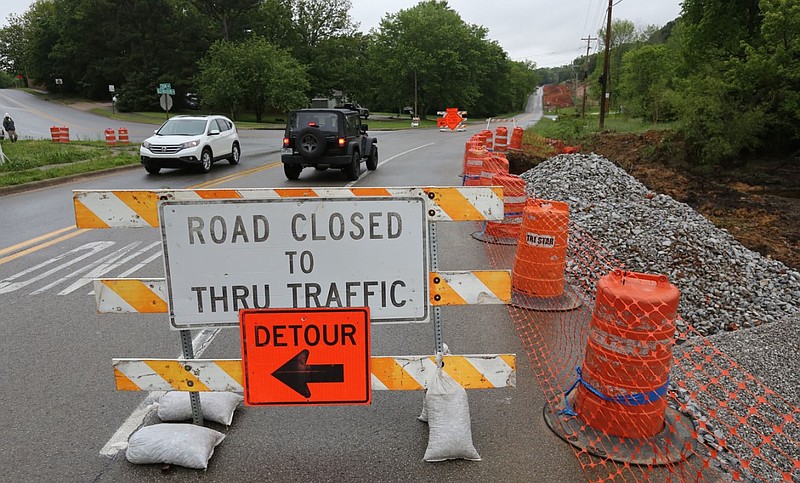 Traffic is detoured on Zion Road in Fayetteville because of construction in this May 20, 2021, file photo. Workers were installing a new sewer line under Zion Road between Vantage Drive and Old Missouri Road. (NWA Democrat-Gazette/David Gottschalk)

WASHINGTON -- Passage of the bipartisan Infrastructure Investment and Jobs Act would result in a major infusion of federal funding for Arkansas, the White House said Wednesday.

In a written statement, Gov. Asa Hutchinson said the state "will benefit" if the bill passes.

Under the current formula, the state would anticipate receiving nearly $3.6 billion for highway programs and $278 million to fix and replace bridges over a five-year period, according to an administration analysis.

During that period, it would also expect to automatically to receive $252 million for public transportation and another $54 million for electrical vehicle charging infrastructure, the analysis stated. Regarding the latter item, the plan is to create "the first-ever national network" of EV chargers.

A minimum of $100 million would also be routed to Arkansas to help it expand broadband access across the state.

Roughly one in three Arkansans would also qualify for a new Affordable Connectivity Benefit, which would subsidize internet access for low-income households, the analysis stated.

In addition, the state could apply for additional funding. The measure includes, for example, a $12.5 billion Bridge Investment Program and almost $16 billion "for major projects that will deliver substantial economic benefits to communities," the White House said.

Hutchinson on Wednesday portrayed the legislation as a win for Arkansas.

"I am glad to see a bipartisan infrastructure bill moving through Congress. I appreciate and support the work that's being done to address true infrastructure needs such as roads, bridges, and broadband. Arkansas will benefit from the infrastructure investment if the bill passes, and it will make a difference in safety, growth and quality of life," he said.

The White House also portrayed the measure as a step forward.

"Passage of the legislation would amount to "the largest long-term investment in our infrastructure and competitiveness in nearly a century," the analysis said.

"The need for action in Arkansas is clear," the report stated.

"For decades, infrastructure in Arkansas has suffered from a systemic lack of investment," it said.

Overall, 663 Arkansas bridges and 6,700 miles of its highways are "in poor condition," the report said.

Boozman has reservations about the bill, as well.

"Senator Boozman has been a long-time champion of supporting infrastructure investments but has concerns about how the Senate bill will be paid for which is still unclear," his spokeswoman, Sara Lasure, wrote.