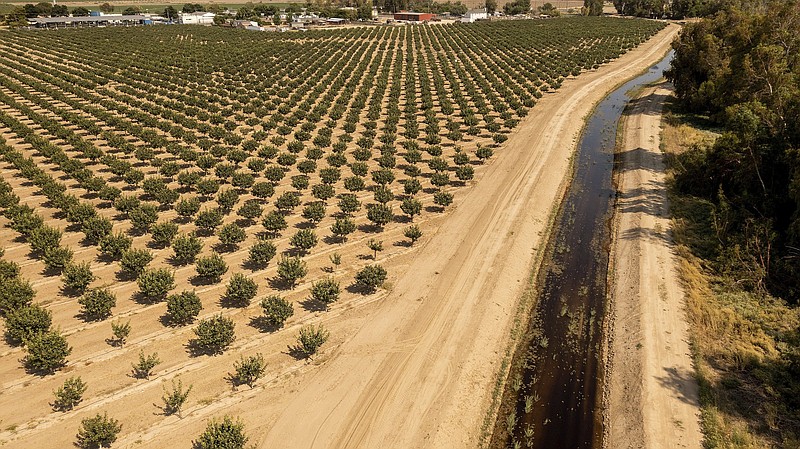 An irrigation canal runs past farmland in Lemoore, Calif., in June photo. California regulators on Tuesday said some farmers in one of the country’s most important agricultural regions will have to stop taking water out of major rivers and streams because of a severe drought. (AP)

California's complex water rights system is designed to allocate water use during times of shortage and such curtailments, while rare, are not unheard of. But the scope of Tuesday's order -- which includes thousands of senior water rights across a wide swath of the state -- is unprecedented, officials said.

While the move has been protested by some farmers, irrigation districts and others, California Department of Food and Agriculture Secretary Karen Ross called the decision "a necessary step," saying the fact that senior water rights holders were included "speaks to the severity of the hydrology and what climate change has presented this year."

"It is a painful moment. We know the impacts are real," Ross said during Tuesday's meeting.

After several hours of public comments, the State Water Resources Control Board voted unanimously to pass the "emergency curtailment" order for the Sacramento-San Joaquin Delta watershed. The order will go into effect about two weeks from now, subject to approval by state Office of Administrative Law and following the mailing of formal curtailment orders.

About 5,700 Northern California and Central Valley water rights holders -- who collectively hold approximately 12,500 water rights -- will be subject to the order, according to Erik Ekdahl, deputy director of the state water board's Division of Water Rights.

The order will largely affect rights holders using water for agricultural irrigation purposes, though some municipal, industrial and commercial entities will also be affected. The regulation carves out an exemption for health and human safety purposes, meaning that water for drinking, bathing and domestic purposes won't be subject to the curtailment.

The water board previously released a draft version of the proposed order in mid-July after a notice of water unavailability, which urges, but does not order, people to stop diverting water. That was sent to many rights holders in mid-June.

"It's kind of the topic of conversation everywhere, whether you're in the feed store or the grocery store or when I'm at work as a livestock adviser," said Josh Davy, a small-scale cattle producer in Shasta County.

The perceived comfort of his local irrigation district's pre-1914 water rights was a key component of Davy's decision to purchase his ranch two years ago. He is now planning to sell his calves early at a loss and fears having to subdivide his property to pay his mortgage. Davy said that without water to irrigate his ranch, the pastures his cows graze on will quickly dry up and the current price of alfalfa negates buying hay as a sustainable option.

"Most of us that went this route, investing in property with these water rights within these districts all did it for very similar reasons in that there was security in that," Davy said. "And now seeing that security gone, we're really scared."

"The state has curtailed water rights only three times before this drought -- the '76-'77 water year, 2014 and then 2015," said Jay Lund, co-director of the Center for Watershed Sciences at the University of California, Davis. Lund believes curtailments will become a much more routine practice in the state as the effects of climate change intensify.

Karrigan Bork, an acting professor of law at the Univerity of California Davis School of Law who focuses on water rights, said he believed the way the state water board had handled the process for this year's emergency regulation would skirt the legal issues raised in 2015, when a number of irrigation districts sued the state over that year's curtailments.

"The way they're doing it now, I think they will be in the clear," Bork said. "I'm sure someone will challenge them anyway, because this is California and that's what we do."

Drought conditions in the state rapidly worsened this spring, when expected snowpack runoff to the watershed decreased by almost 800,000 acre-feet between April and May.

Gov. Gavin Newsom declared a drought emergency in 41 of California's 58 counties on May 10. In that same month, many farmers were warned that they would receive little or nothing from two large allocation systems, the federal Central Valley Project and the State Water Project.

"The simplest terms are the snow was kind of there and then it wasn't," said David Rizzardo, chief of the hydrology branch at the state's Department of Water Resources.

The curtailments will create hardships for many growers, particularly those without access to well water. But the burden may be lessened by the time of year. Generally speaking, the biggest demands for agricultural irrigation in the Delta watershed tend to be in the late spring and summer, meaning the bulk of water use for the year is likely behind many growers.

"For some farmers, it may be pretty difficult to comply with this, but it's also been signaled ahead of time and anticipated," said Jeffrey Michael, an economic forecaster and director of the Center for Business and Policy Research at the University of the Pacific in Stockton.

Michael said he doubted the board's decision would have any significant effects on food prices in the near term.